Mother, 35, with 13 children dies of Covid as her heartbroken wife pays tribute

A mother with 13 children has died from coronavirus leaving her heartbroken wife to pay tribute to the ‘backbone of our family’.

Sonia Partridge’s death, in the early hours of Tuesday morning, comes as more than 200,000 people have signed a petition demanding Boris Johnson holds a public inquiry into the Government’s response to the pandemic.

Britain has the worst Covid death toll in Europe, with the total number of victims yesterday jumping past 53,000 after health chiefs announced another 529 fatalities. Ministers have been accused of a string of failures, including locking down too late in the spring and not protecting vulnerable residents in care homes.

The Prime Minister is now facing huge pressure over Christmas, with No10 keen to allow festive get-togethers over a five-day period between December 24-28, after a tumultuous year that has seen families kept apart for months on end. But top scientists, including ones on Downing St’s advisory panel SAGE, have warned letting households mix may ‘throw fuel on the fire’ and inevitably lead to even more deaths.

Ms Partridge, 35, of Stockton-on-Tees, County Durham, died in hospital, leaving her partner Kerry Ann without ‘my life for the last 11 years’. The next day, Mrs Partridge, 40, paid touching tribute to her wife who she said ‘was bullied for being so big, but gave all of us the confidence to be individual and not care what anyone thought’.

Sonia had two children of her own and Kerry Ann had six, with their other five being via sperm donor.

Grieving relatives of coronavirus victims ratcheted up their campaign for a public inquiry last night with a striking video projected on to the Houses of Parliament.

The Covid-19 Bereaved Families for Justice group accused Boris Johnson of ‘ignoring’ requests for a meeting to discuss the Government’s pandemic response.

Emotional members hit out at ‘flawed decision-making’ and said: ‘Ours are the stories of where we’ve got it wrong.’

Their faces were beamed on to the south side of the Palace of Westminster by the Led By Donkeys anti-Brexit organisation, which has a track record of such stunts.

Sonia Partridge (back row, centre, with her family), 35, of Stockton-on-Tees, County Durham, died in hospital in the early hours of Tuesday morning, leaving her partner Kerry Ann without ‘my life for the last 11 years’

January 31: Projected a pro-EU message on the White Cliffs of Dover on Brexit Day.

October 2019: Erected billboards with a picture of PM saying ‘I lied to the Queen’ following prorogation of Parliament.

October 2019: Ploughed the message ‘Britain now wants to remain’ into a wheat field in Wiltshire.

September 2019:  Carved a quote from Michael Gove ‘we didn’t vote to leave without a deal’ into the sand at Redcar beach.

Ms Partridge, who is studying to be a midwife at university, said Sonia ‘loved everyone with a passion’ and that looking after the youngest 11 of their children without her will be ‘so hard’.

She said their family ‘needs time’ because they have been served an eviction notice by their landlords, and they have set up a fundraiser to cover Sonia’s funeral costs and help them through the winter.

Speaking from their family home in Stockton-on-Tees, County Durham, Ms Partridge said: ‘I just walk into a room and expect to see her and she’s not there.

‘I’m watching the younger children running around like nothing has changed, and it’s very hard to accept she’s never going to see them grow up.’ 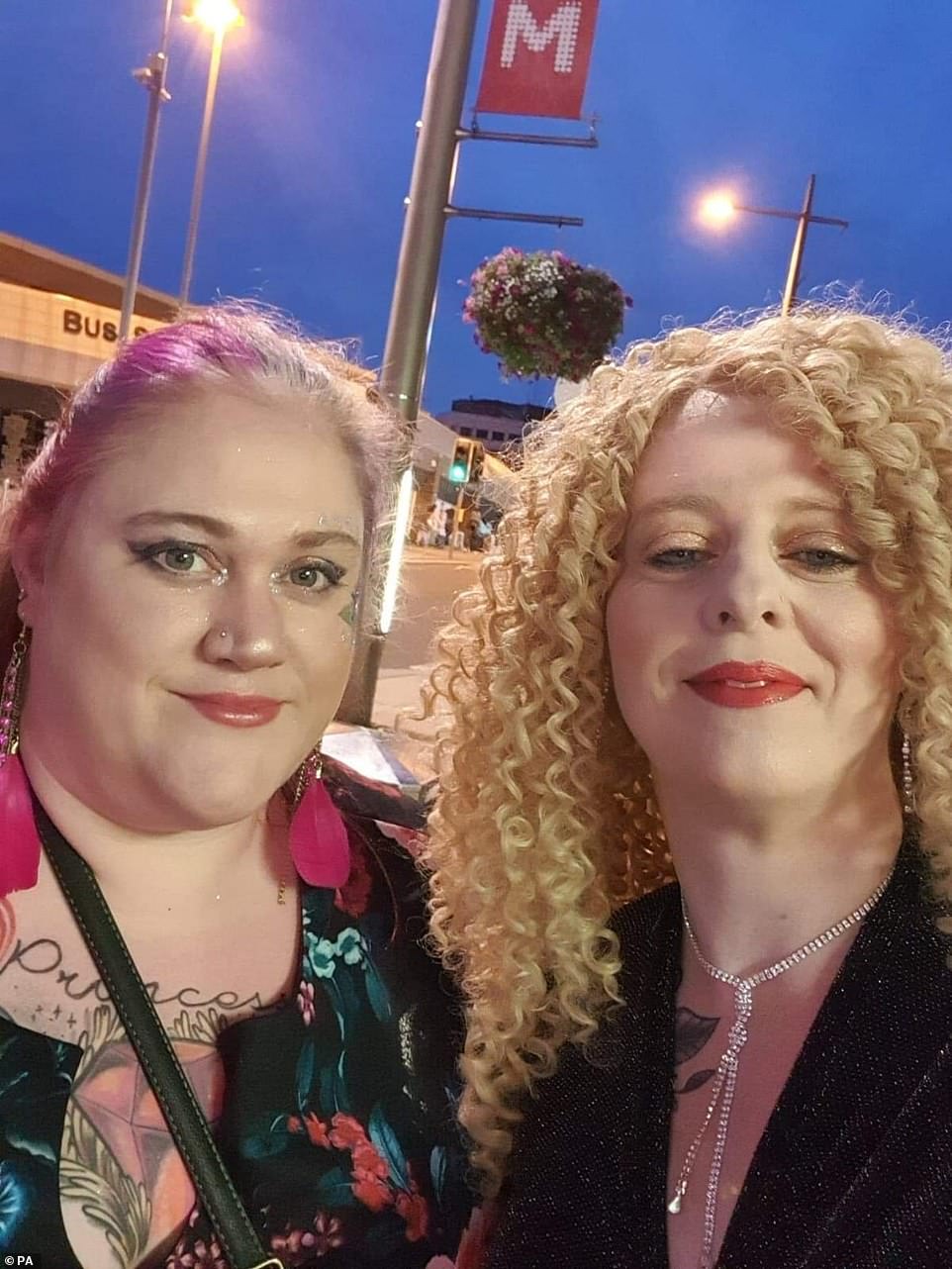 The next day, Kerry Ann Partridge (right), 40, paid touching tribute to her wife (left) who she said ‘was bullied for being so big, but gave all of us the confidence to be individual and not care what anyone thought’ 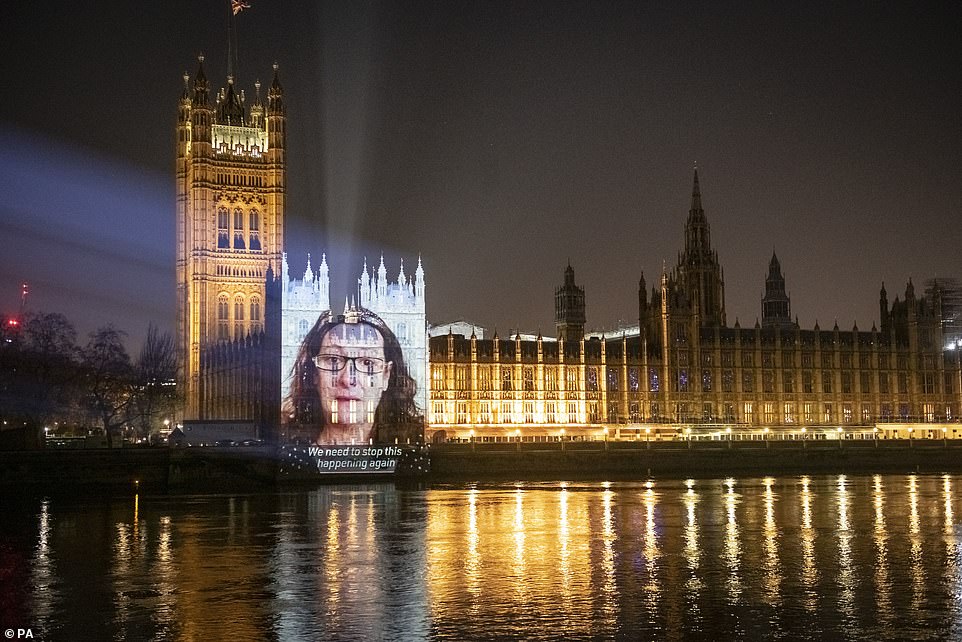 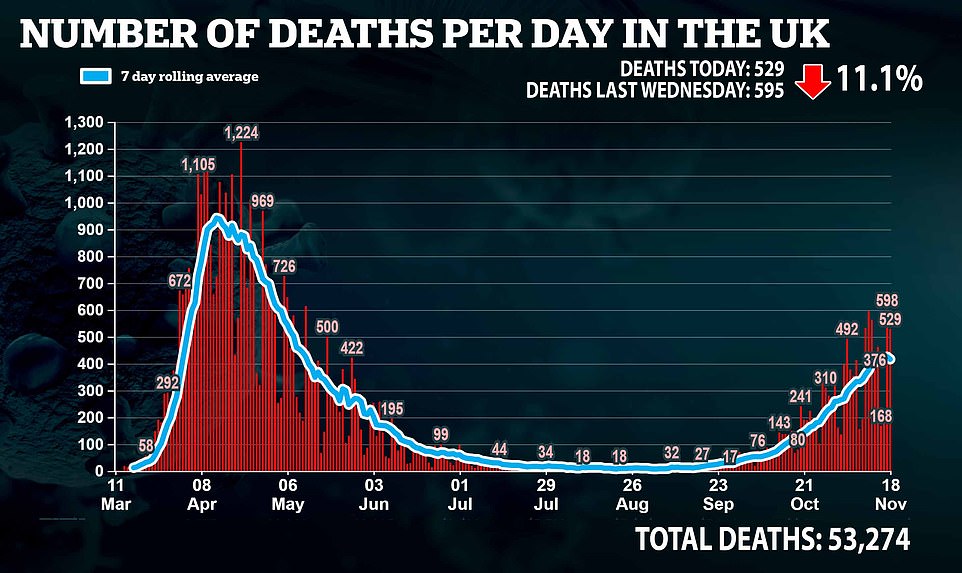 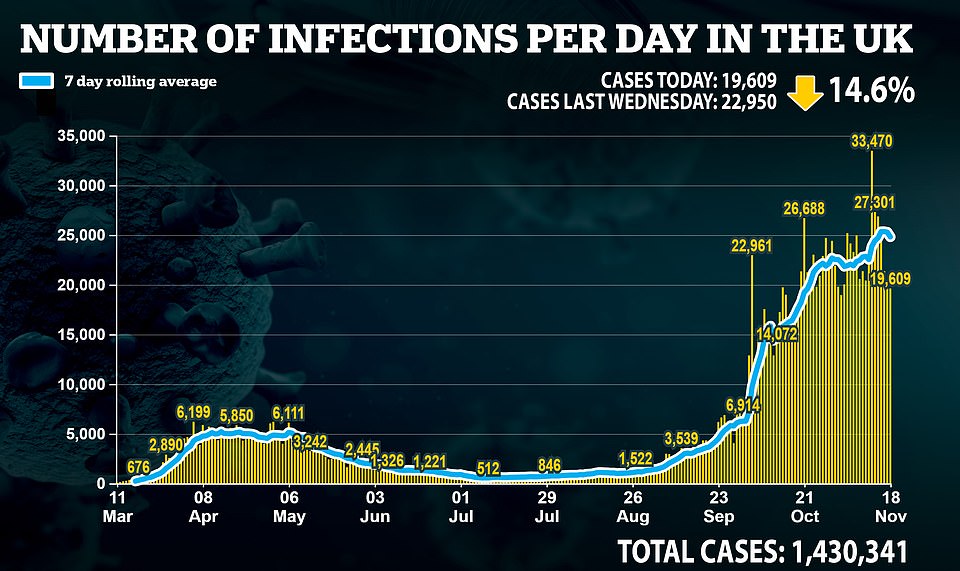 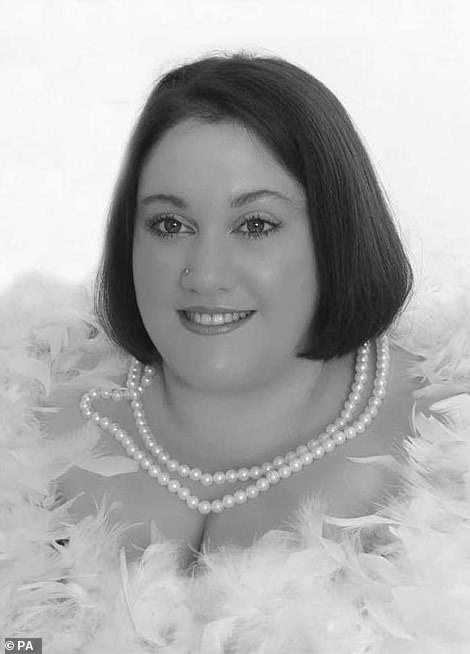 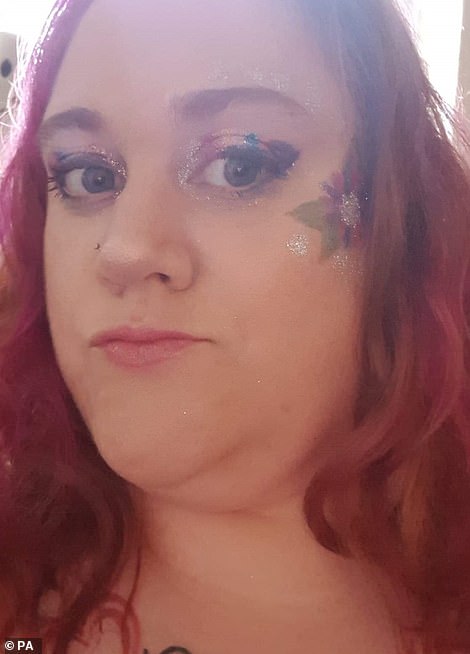 Sonia (pictured) had two children of her own and Kerry Ann had six, with their other five being via sperm donor

Letting Britain have a near-normal Christmas would only ‘throw fuel on the fire’ and put older generations in harms way, top scientists warned today as a minister admitted that Number 10 ‘doesn’t want to be grinches’ by cancelling festive celebrations but must ‘protect lives’.

Downing Street is mulling over whether to allow up to four different households to mix together for five days over the Christmas period — from December 24 to 28 — at the cost of a 25-day lockdown.

But Professor Andrew Hayward, a member of SAGE and infectious diseases expert at University College London, warned against the proposed plans today, claiming they posed a ‘substantial’ risk of spreading the coronavirus to the elderly, who are most vulnerable to the disease.

‘My personal view is we’re putting far too much emphasis on having a near normal Christmas,’ he said. ‘We know respiratory infections peak in January, so throwing fuel on the fire over Christmas can only contribute to this.’

Another top expert from the rival advisory group Independent SAGE, Professor Gabriel Scally, also advised against the scheme, saying there was ‘no point’ in having a very merry Christmas only to ‘then bury friends and relations in January and February’.

Professor Scally, an expert in public health at Bristol University, said today: ‘We need to think very seriously about Christmas and how we’re going to spend it. It’s too dangerous a time and opportunity for the virus to spread.’ He tweeted: ‘We have not made nine months of sacrifices to throw it all away at Christmas.’

Defence Secretary Ben Wallace argued he did not want to be the ‘Grinch that stole Christmas’ but insisted the Government was also aiming to ‘protect lives’. He said: ‘Come December 2 the decisions will be made that we will try and get that balance right, but ultimately we will try and make sure we protect our NHS and safeguard lives.’

The Prime Minister has also said it is his ‘desire to try and allow loved ones to have Christmas together’ after a tumultuous year that has seen families kept apart for months on end. But yesterday he admitted it wouldn’t be a normal festive period this year.

She added Sonia, who had underlying health conditions, ‘could only manage one or two words’ after she was rushed to University Hospital of North Tees on Friday, but that ‘we were with her when she passed’.

Fighting back tears, she said: ‘She got too tired, and decided she would take the oxygen mask off and she went really quickly after that.’

Daughter Meera Jo, 16, saw her mother in hospital before she died and said ‘there’s never going to be enough words’ to pay tribute to her.

Miss Partridge said: ‘It’s left a massive hole in all our lives. It’s hard telling the little ones she’s gone away with the angels and she’s not coming home.

‘No matter how hard things were for her, she always put everyone else first, and now she’s gone.

‘We just feel numb, and other times we are just crying and can’t stop crying.

‘And when we laugh now, it feels wrong because she’s not here to laugh with us.’

Ms Partridge said she, Meera and the other children, the youngest of whom is two years old, are coping with their loss by ‘doing the things that would make Sonia feel better’.

She said: ‘We’re doing the housework and getting the Christmas decorations out.

‘Sonia loved Christmas, it was her favourite time of year. She put so much magic into everything she did.

‘She was the homemaker, the foundation of our home. She did all the running around looking after the young ones, making sure the laundry was done, and being here for the kids when they wanted to hug her.

‘We just want people to know how amazing she was.’

The family’s fundraiser can be found here.

More than 200,000 people have now signed a petition launched by ‘hundreds of bereaved families’ demanding a ‘rapid review’ into ministers’ handling of the crisis.

The video to mark the petition’s milestone features Lobby Akinnola, 29, whose father Olufemi died with coronavirus in April.

He says: ‘I would do anything to have my Dad back, but I can’t. So instead I’m going to try and emulate him – and care for other people, and use everything I can to make sure that no one else has to experience this.

‘There are lessons to be learned here that can prevent other people from feeling the pain that I feel every day.’

Her face lighting up the River Thames last night, she said: My mum was called Sylvia, and she passed away in a care home on the sixteenth of April.

‘The nurse that was with her said to me on the day that she died: “Deborah, your Mum has still got a lot of life left in her”.

‘I would love to meet Boris, to ask him to agree to a statutory public inquiry – to learn lessons from the first wave and save lives. 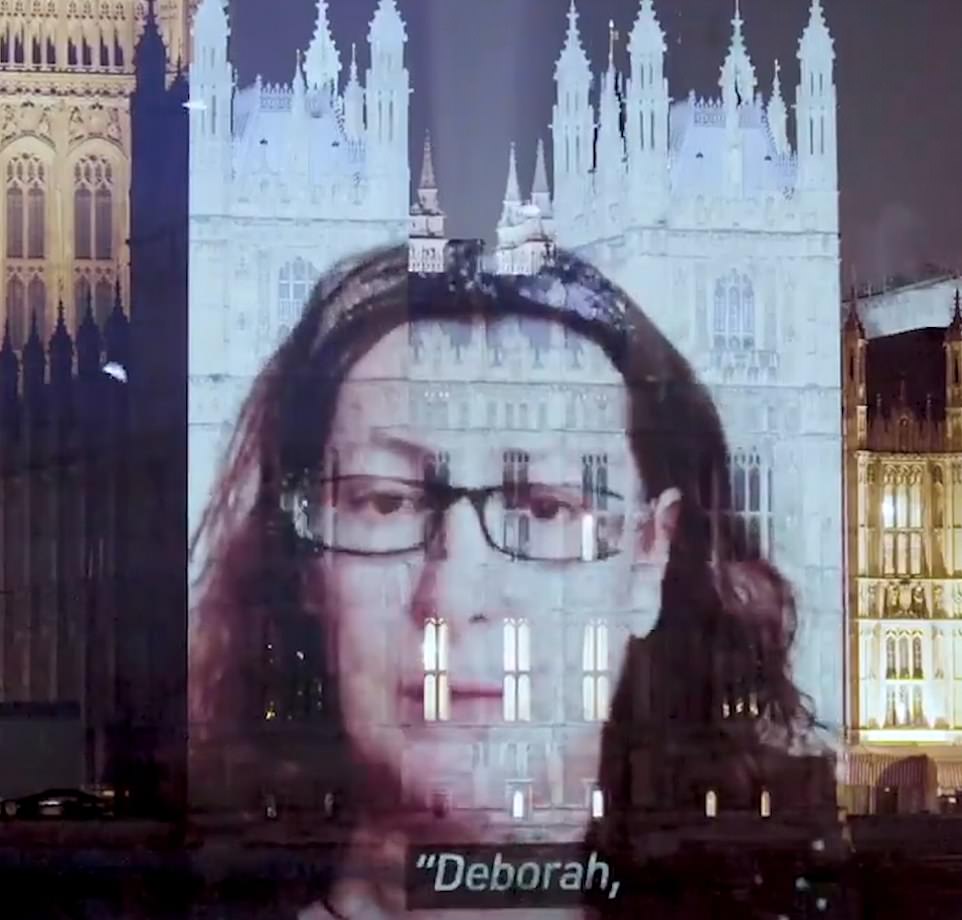 Deborah Doyle, from Sunderland, said: ‘My mum was called Sylvia, and she passed away in a care home on the sixteenth of April’

Oxford University’s Covid vaccine triggers a ‘robust’ response from the immune system and appears to work in older people, a study revealed today in another leap towards ending the pandemic.

Scientists behind the project this morning published the results of an early trial of the jab, which found it created strong signs of immunity in 99 per cent of people.

The second-phase study included 560 volunteers, most of whom were white and British, and showed that people across all age groups seemed to react equally well to the jab. It adds to data published in July suggesting it would work safely for under-55s.

It marks another breakthrough in the race to develop a vaccine to prevent Covid, after jabs made by Moderna and Pfizer and BioNTech were both revealed to be around 95 per cent effective within the past week.

Oxford’s results are from an earlier stage of trials so cannot estimate how well the vaccine protects against Covid, but are still a positive step. Detailed results about how well it works are expected within weeks, the university said.

Britain has already pre-ordered 100million doses of Oxford’s jab, which is being made with pharmaceutical firm AstraZeneca.

‘We need to stop this happening again. Please Boris, we’ve written to you, the group that I’m involved in, many, many times. In Parliament you’ve said you’ll meet with bereaved families.’

And Jamie Brown, whose father Tony, 65, died of Covid-19 in Colchester General Hospital on 29 March slammed the Prime Minister for not meeting.

He said: ‘You said you’d meet with us, and then you went back on your promise. So now that you’re ignoring us, we’ve decided to bring our message to the Houses of Parliament.

‘We’ve experienced first hand the pointed end of flawed decision making and poor planning. Ours are the stories of where we’ve got it wrong.’

In August the Prime Minister suggested he was prepared to meet with Covid-19 Bereaved Families for Justice but later rowed back, pointing to a legal challenge mounted by the group.

Responding to a question by Sir Keir Starmer at PMQs, he said: ‘It turns out that this particular group that he refers to are currently in litigation against the Government and I will certainly meet them once that litigation is concluded.’

At the time Downing Street said: ‘The Prime Minister has responded to Bereaved Families For Justice to express his sincere condolences to all families who have sadly lost loved ones to this terrible disease.’

The campaigners have sent pre-action letters to the Government, which they claim is ‘entirely distinct to litigation’.

On January 31, the day Britain left the EU, they projected a pro-Brussels film on to the White Cliffs of Dover saying the UK would rejoin the bloc ‘before long’.