Seven-year-old girls’ screams for food ignored, as mother fears she will become obese because of a rare condition which leaves her child starving

Tracy Fitzgerald, 36, says it is heartbreaking to ignore her daughters cries, but worries she will become obese and face health problems if she gives in. 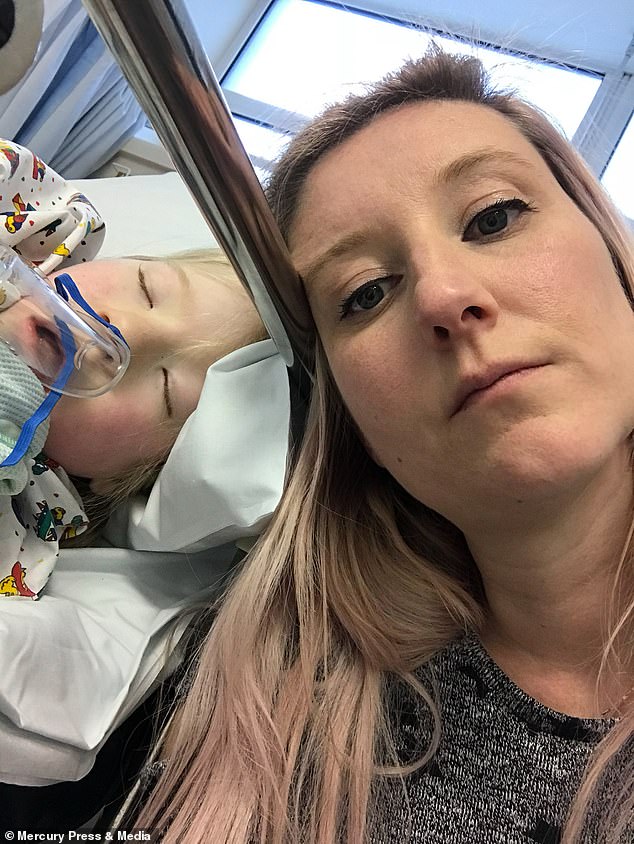 Mother, Tracy Fitzgerald, 36, must ignore her daughters screams for food in fear she will become obese. (Pictured in hospital this year for an unrelated leg condition)

Megan was diagnosed with condition at just five-weeks-old. Her mother started to notice how regularly her daughter would cry out for constant feeding as she grew up.

Mrs Fitzgerald, also mother to Nathan, six, has to ignore her daughters breakdowns when she begs for food and cannot even discuss food if she is around.

She said: ‘When I tell her that she cannot have any more food she immediately starts to cry and scream, but I can’t give in and feed her.

‘No food is ever left on show for her to see, we have to completely avoid food at social events and we can’t even whisper anything about food as it will set her off.

‘It is absolutely heartbreaking every time she has a breakdown and it’s not a mothers reaction to ignore her, but it has to be done.’

After giving birth to her daughter eight weeks early, the mother-of-two was told that there was something wrong with little Megan from the offset.

However, it wasn’t until five weeks later that the family were given the diagnosis that she suffered with a rare condition that affects one in every 15,000 children born in England.

Mrs Fitzgerald, a HR adviser, said: ‘We were told that she had a chromosome abnormality, but it wasn’t until a few weeks later that we were told it was Prader-Willi syndrome.

Alongside a constant feeling of needing to eat, the condition means that Megan also has learning difficulties. 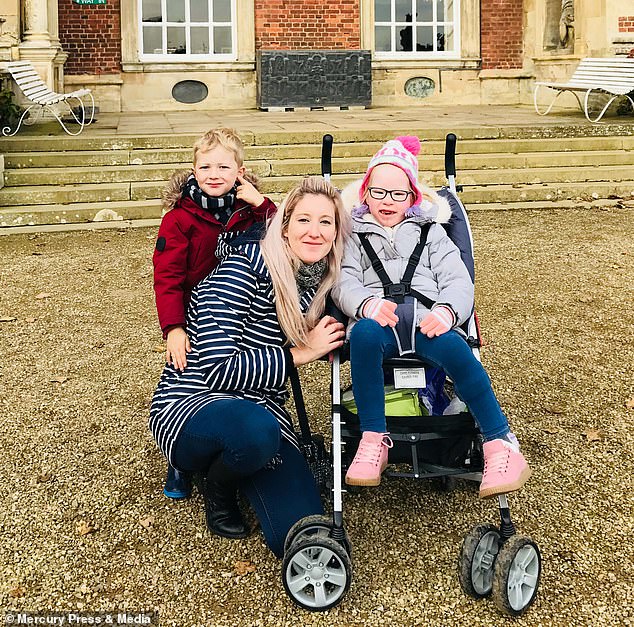 Mrs Fitzgerald, pictured with her two children, Megan and Nathan, must hide food and avoid talking about it or social situations, as Megan often becomes upset 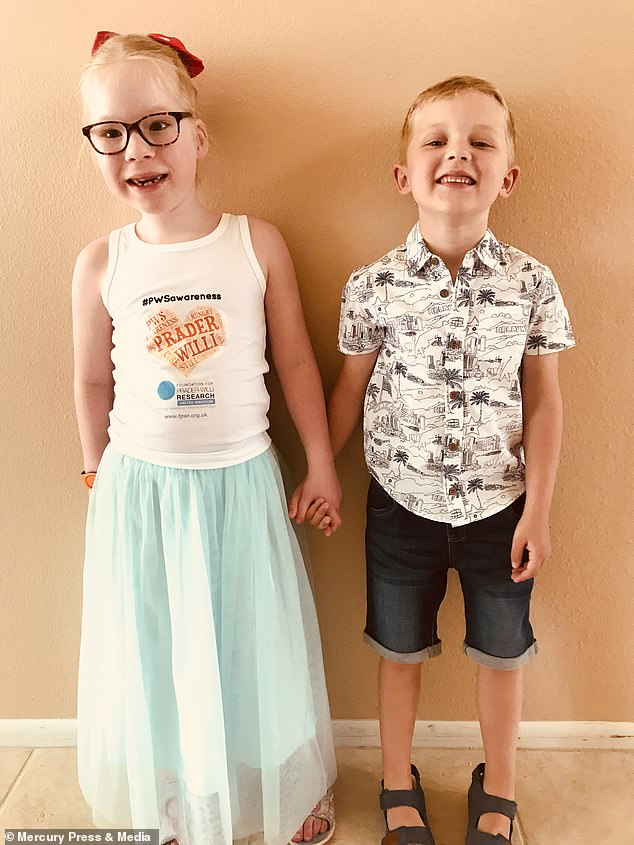 Megan can eat six times the amount of other children. Pictured with her brother, Nathan, six.

Mrs Fitzgerald said: ‘All of her milestones were delayed. She was out of hospital by the time she was six-months-old, but it wasn’t until she was three-years-old that she could walk by herself.’

By the age of four, Megan was eating at any opportunity she had, and up to six times the amount of other children.

‘We hardly ever go out for food because she cannot cope with other people’s food being served if hers is not ready – it really upsets her’, Mrs Fitzgerald said.

‘She’s got a set routine of when she can eat and, as a family, we all have to stick to that so she doesn’t even see anyone else eating food as it would trigger her.’

As she has got older, her mother describes how her abilities to find food have grown, and the restrictions have become tighter.

‘As she’s grown older she’s continued with her need to eat and will try and get her hands on any food she can find, but over the years we’ve found new ways to distract her’, Mrs Fitzgerald said.

She explains that she may need to start putting locks on her cupboards to stop Megan from eating everything in sight. 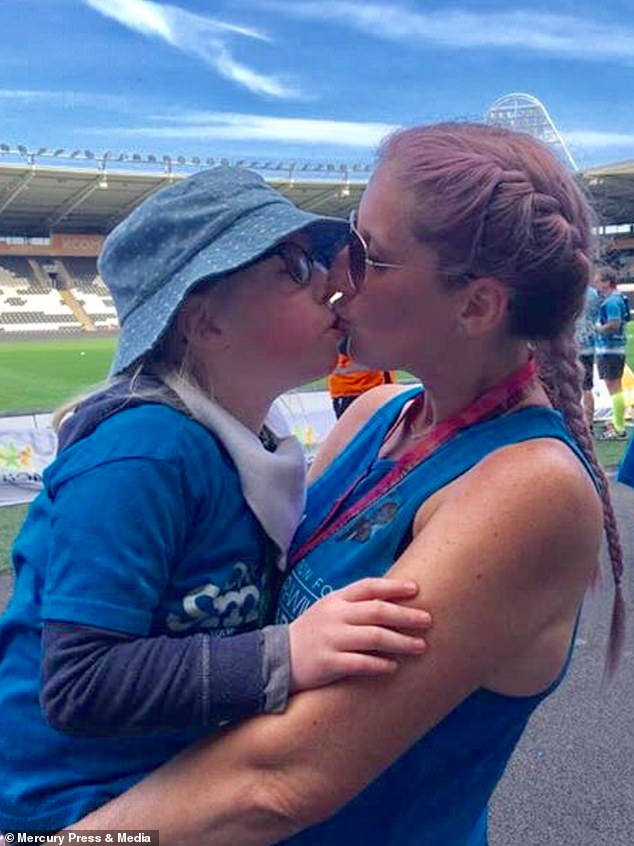 ‘I look like a horrible mother – but people don’t understand’, said Mrs Fitzgerald

She said: ‘Although I can distract her most of the time, I cannot be there every second of the day

‘A few months ago Megan helped herself to a handful of her brothers birthday cake, which she had already had a small slither of just moments earlier.

‘It had been left out of the way in the kitchen but obviously not far enough from her reach, she saw an opportunity and she took it.

‘I didn’t want to put locks on our kitchen cupboard and fridge, but it’s looking more and more likely that I’m going to have to.

‘She’s at the age now where she can find ways to get food herself, which means we have to have a regimented approach to food.’

Megan’s brother Nathan is ‘absolutely amazing’ when it comes to Megan and the families’ lifestyle, said Mrs Fitzgerald.

‘Megan needs a lot of care and attention when it comes to her condition, so I always make sure I take Nathan out on special days out and give him as much special time together too.’

Mrs Fitzgerald is now sharing her story to raise awareness to others of the reality of the rare condition.

She said: ‘I had never heard of the condition until my daughter was diagnosed with it, so I want more people to learn about it.

‘If Megan has one of her moments when we’re out in public, people can turn around and stare at us, and I look like a horrible mother – but people don’t understand.

‘Luckily all of Megan’s friends and family are supportive and understanding, and make sure that they don’t have food out around her.

‘But as a lot of people don’t understand the condition, they don’t know how to act around her and what simple things can set her off.

‘I hope that by sharing Megan’s story, people will be able to understand the complexity of the condition.’

WHAT IS PRADER-WILLI SYNDROME?