Mother, 36, who was left wheelchair-bound recovers after life-saving surgery after £130,000 donation

A mother left with a deadly spinal condition after hitting her head on a ceiling fan has made a ‘miracle’ recovery after undergoing life-saving surgery paid for by a stranger.

Rachel Pighills, 36, was left wheelchair-bound with the constant risk of being ‘internally decapitated’ – but can now walk unaided without a neck brace for the first time in four years.

The journey has been tough for Rachel, who endured a ‘traumatic’ search by UK Border Force officials after she and her husband were accused of international drug smuggling upon their return from Spain following the surgery.

Shocking pictures showed Rachel sobbing while lying on a stretcher and connected to an oxygen tank inside a warehouse at the docks in Plymouth, where she was forced to wait for four hours while border agents meticulously searched their vehicle. 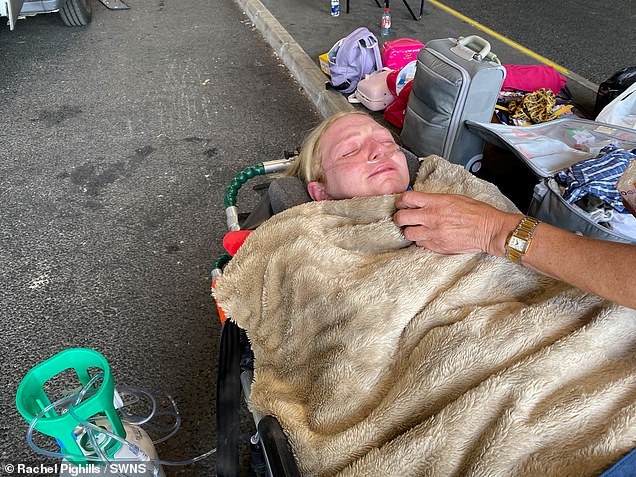 Rachel and husband 41-year-old husband Guy, who share a 14-year-old daughter, spent almost four years trying to raise £215,000 for pioneering surgery which is not available on the NHS.

The couple, from Pershore in Worcestershire, finally reached the milestone earlier this year thanks to a woman in her 60s from Warwickshire who loaned them £130,000.

After being told it was too risky for Rachel to travel to Barcelona by plane for the operation, Guy drove her 1,055 miles in a small second-hand ambulance. 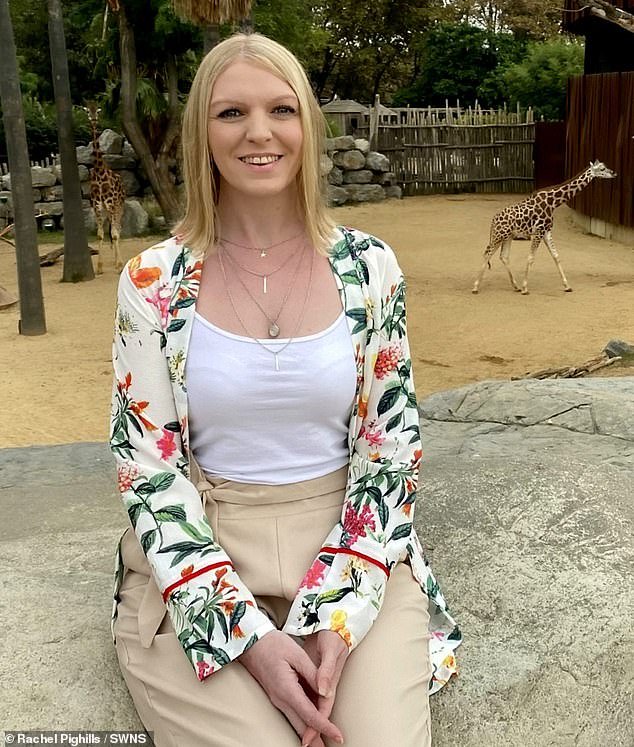 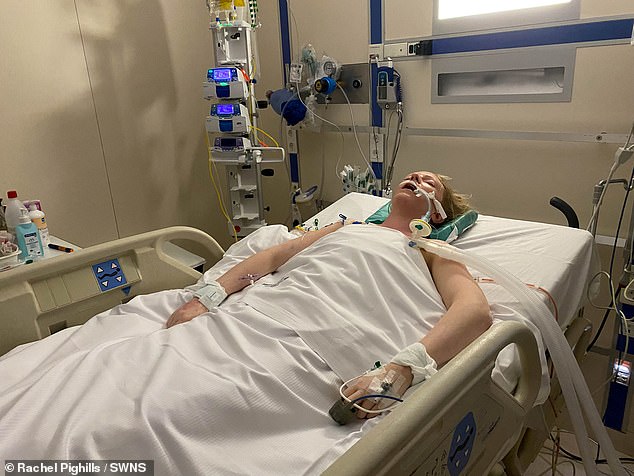 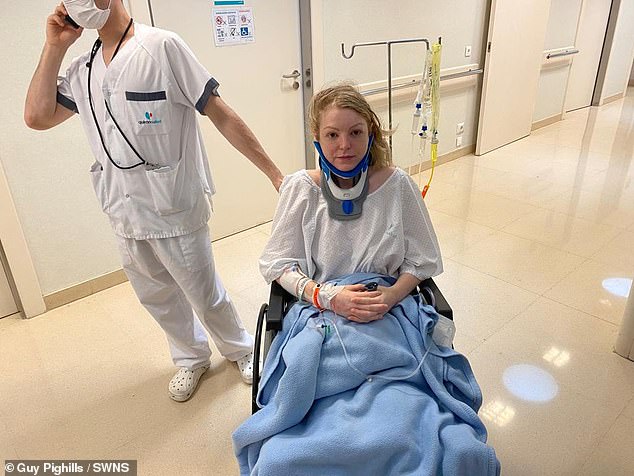 Rachel Pighills is tended to by a nurse in hospital in Barcelona, following her successful surgery in May 2022

What are atlanto axial instability and basilar invagination?

It occurs when the joints connecting the spine and base of the skull become too floppy, causing the spinal cord to become distorted and injured. In rare cases, the illness can be deadly.

Sufferers may need to undergo traction – when pressure in the neck is eased and joints move back into place – and then wear a brace to stabilise the neck until the joint has firmed up.

The condition occurs is up to one in five patients with Down’s syndrome and is a known complication of other joint disorders.

But outside of these groups, doctors aren’t sure on how common it is. The condition can often present itself with basilar invagination. Basilar invagination causes the bone at the top of the spine to move towards the base of the skull.

Due to the abnormal position, the brain stem and top of the spinal cord have less space and they may become compressed – which can be fatal.

Some are born with basilar invagination, while others have the condition due to an injury, such as a bike accident, driving accident or fall.

Basilar invagination can cause no severe symptoms in some, while it can kill those whose brainstem is squashed.

Signs of the condition can include headaches, dizziness, confusion, difficulty swallowing, weakness and numbness when the neck is bent. The condition can be treated with physical therapy, anti-inflammatory medicines or a neck brace.

Some people may require surgery to relieve pressure on the spinal cord and stabilise the joint so bones cannot move out of place again.

After arriving in the UK by ferry on June 17, Guy claims the ambulance was ‘stripped to pieces’ by Border Force agents in a failed big to find illegal drugs.

Rachel’s condition stems from an accident when was moving into a new house in August 2018, when the spinning blades of a ceiling fan smashed her on the back of the head causing catastrophic injuries.

The mother was left with atlanto axial instability and basilar invagination – meaning her brain was literally sinking into her spine as her skull dropped.

The rare condition meant she could no longer turn her head the wrong way as each time she did her spine would partially dislocate increasing a risk of paralysis or death.

After being driven to Spain by Guy, doctors at Teknon Hospital inserted metal rods into her spine and reset her skull and brain stem in an operation that lasted 13-and-a-half hours back in May.

The surgery was a success and after almost four weeks in hospital, Rachel and Guy drove back to the UK to return to their home.

Now six months later, Rachel has seen an improvement in her condition, which doctors said she was unlikely to see for a year.

She has now enjoyed days out visiting a zoo, going for meals with her husband and walking her dogs for the first time since 2018.

Rachel no longer has to wear the neck brace which was a constant fixture in her life unless travelling and now tries to walk everywhere without the help of a wheelchair.

She said doctors in Barcelona had been left ‘absolutely amazed’ by her progress, while her husband called it ‘an absolute miracle’.

Before the operation, she had been left virtually housebound as one fatal turn of her head could have proved fatal and a trip to the supermarket was considered a ‘day out’.

Rachel said: ‘It wasn’t expected for the recovery to go so well so quickly.

‘The bone growth has been what you’d expect at 12 months, not six months. It’s normally a year before you start turning a corner like this.

‘Around early November I was able to go for a proper walk. I couldn’t walk like I could do now and it just feels amazing.

‘It is a miracle recovery but I’ve still got a long way to go.

‘If things stay as they are or continue to get better I won’t need the other operation. They say a year plus for the body to heal fully; it’s only going to get better, hopefully.

‘We went back to Barcelona and we managed to go to the zoo; I’ve been able to walk the dogs and go for a meal – just normal things you take for granted.

‘I don’t have to wear my neck brace now unless I’m travelling. My wheelchair I take with me but I try and walk.

‘My body getting over the surgery and the muscle aches, the pain and tiredness will reduce. I’m just building my strength up. 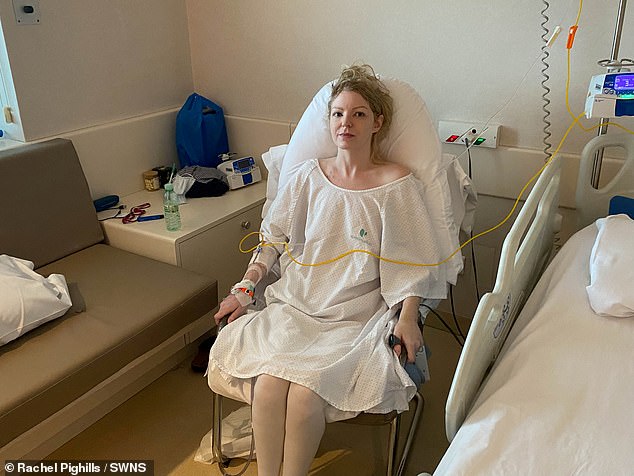 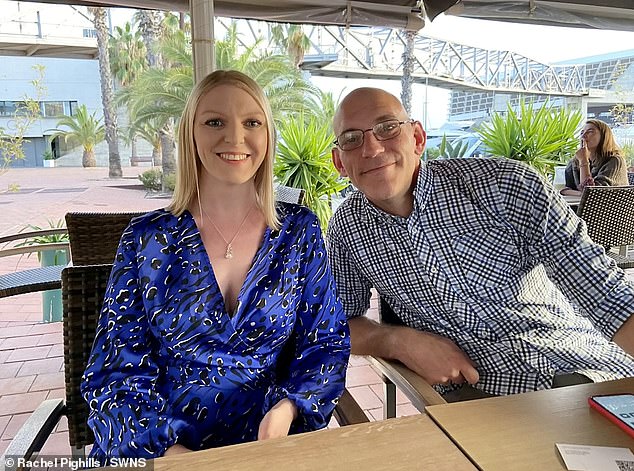 ‘I am grateful to the woman who loaned us the money. She really is our guardian angel. What better gift to give than the gift of life?’

Rachel and Guy, who works as a service technician for the NHS, have kept the ambulance they used to get to Barcelona as it gives Rachel easy access when she wants go out.

‘Certain cars are alright but (the ambulance is) far more comfortable. It’s a godsend. There’s still pain and I will always have to turn from my hips.

‘But my one goal was to take the dogs for a walk with my family so now hopefully the only way now is up. I’m a determined person.’

The couple are now raising money to pay back the £130,000 loan on a GoFundMe page.