Mother, 78, and daughter, 55, are stabbed to death in ‘noisy neighbour row’

A mother and her daughter were stabbed to death and a man was left fighting for his life yesterday after a row with neighbours in a leafy village ended in a bloodbath.

Witnesses said the women – named locally as Sharon Harris, 55, and her 78-year-old mother Margaret – were killed after Margaret’s husband David, 76, tried to intervene in an argument between a man and his girlfriend outside.

According to one, the man chased Mr Harris back into his house and it is understood Sharon and her mother were attacked. 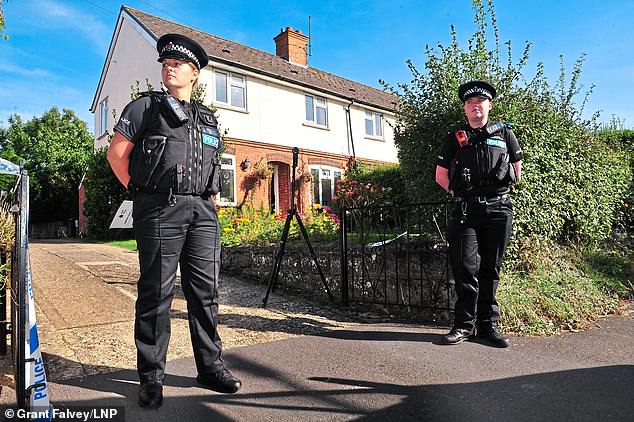 Police outside a property on Carpenters Lane in Hadlow, Kent. Two women are believed to have been killed after after a family member tried to intervene in an argument between a man and his girlfriend outside their home

Neighbours spoke of their shock at learning of the double murder in their ‘quiet and friendly’ village – Hadlow, near Tonbridge in Kent.

Retired Mr Harris is said to have stepped into the row because the couple were making so much noise.

A neighbour said: ‘We’ve heard that a young man was having an argument with his girlfriend. David went out to tell them to be quiet.

‘The man apparently chased him into the house and went berserk. God only knows what went on in there.’

Police were called to the scene by paramedics at 7.40am. They closed off the lane where the Harris’s £250,000 semi-detached home sits.

An air ambulance flew Mr Harris to hospital in London with serious injuries.

Police said a 28-year-old man was arrested at the scene on suspicion of murder. Forensics officers were later seen going into the three-bedroom 1930s mock Tudor property. 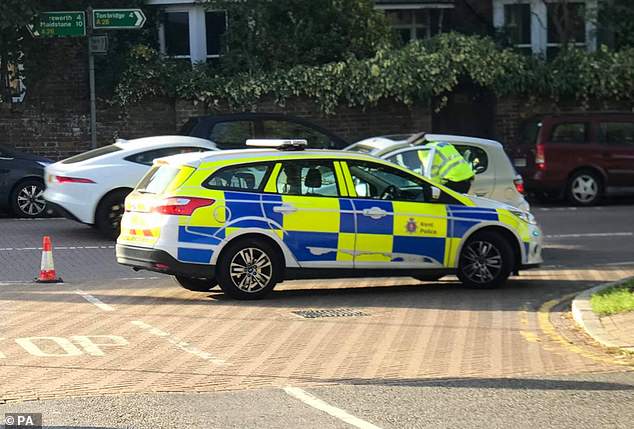 Kent Police were sent to the scene (pictured) at around 7.40am yesterday. A cordon has been in place across Carpenters Lane for most of the day 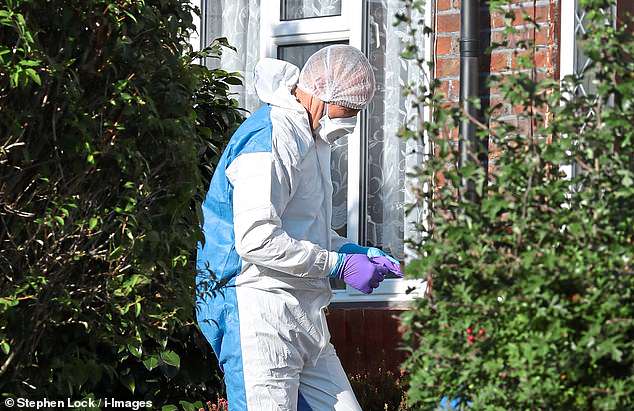 Police forensic officers have been carrying out investigations in the Carpenters Lane area of Hadlow, Kent. A cordon was in place for much of the day yesterday 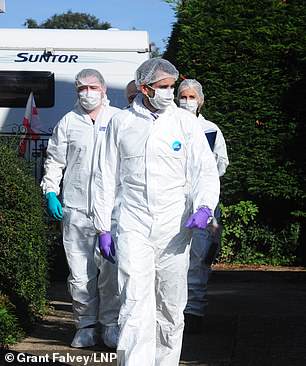 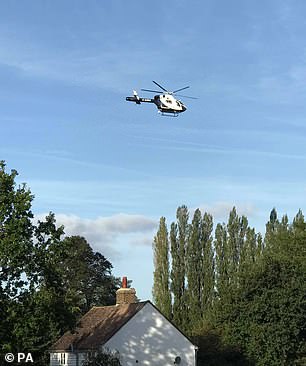 Police are carrying out forensic tests (left) following the murder in Kent this morning. A man in his 70s was flown from the scene to hospital in London by air ambulance (right) 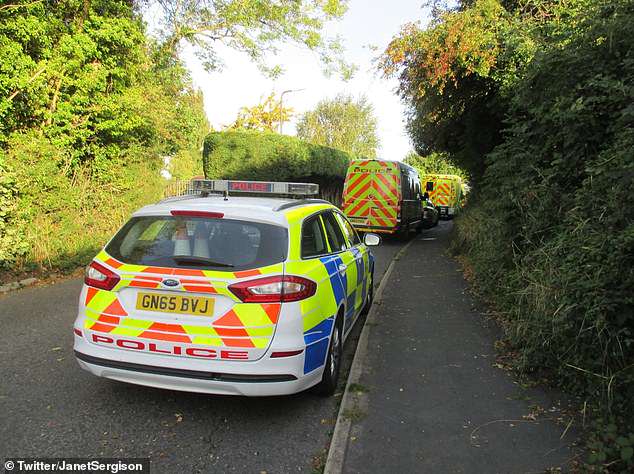 Last night, Margaret Harris’s sister Doris Pope, 71, said: ‘It’s just a big shock and obviously we hope that the person who did this is brought to justice.

‘We are shocked and devastated and just cannot believe something like this can happen.’

It is understood the Harris family had been involved in ongoing disputes with some neighbours about their driveway.

Neighbour Sophie Moorey-Brown, 31, said: ‘The first we knew about it was when there was an air ambulance very low over the houses.

‘There was a heavy police presence and forensic teams. We’ve lived here for five years and never heard anything bad happen. It has always been so quiet and a lovely place to be. We are very shocked and saddened by what we have heard and are trying to shield our boys from hearing too much.

‘It is such an awful thing to hear anywhere but in our lovely, friendly little village it’s bound to rock us residents even more so.’ Neighbour Margaret Maile, 63, a retired accountant, said: ‘I came home to see this cordon. 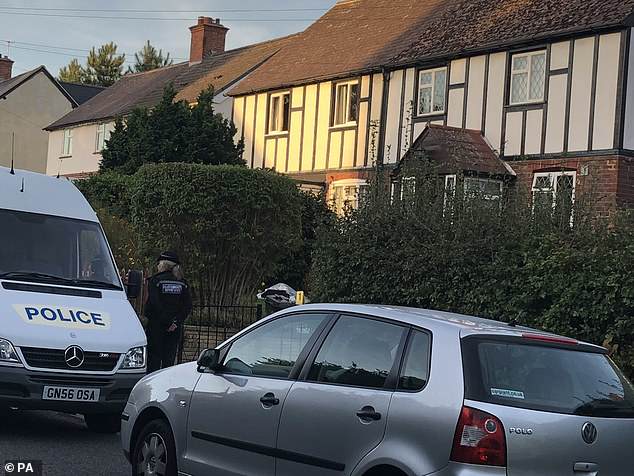 Police outside the property on Carpenters Lane. The two women believed to have died yesterday morning have been named locally as 55-year-old Sharon Harris and her mother Margaret, 78 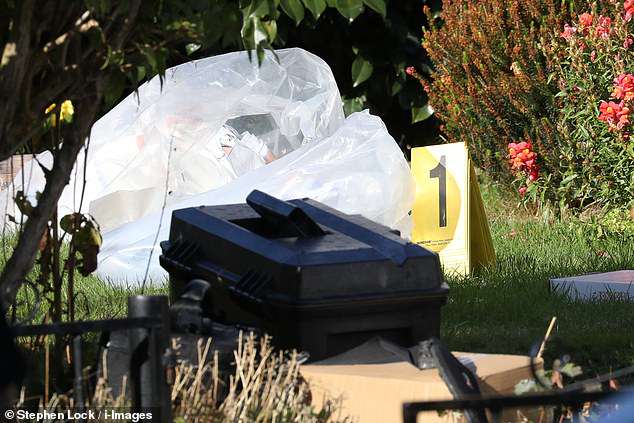 The scene after two women were found dead in Hadlow near Tonbridge, Kent. Neighbours have spoken of their shock following the launch of the murder investigation 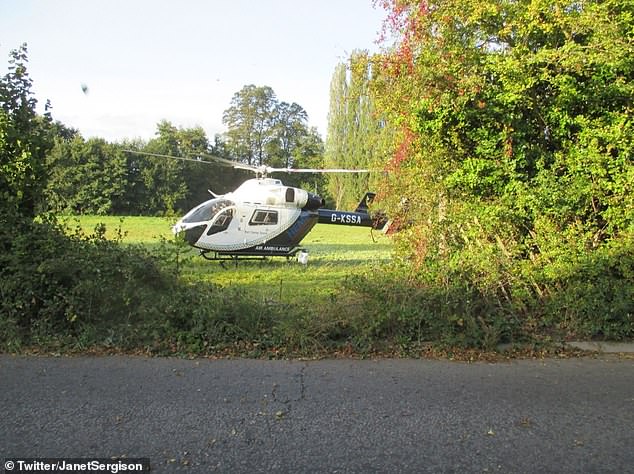 ‘I knew Sharon and only saw her a few days ago. She used to leave home early and come back after 6pm. I heard a man was taken to hospital in London for treatment.’

Resident Nigel Keogh, 50, said: ‘They are an amicable family, we didn’t know them well but knew them to smile or say hello to. They seemed nice. There was a campervan often parked outside, I think they would go off on little trips.’

Others said that Mr Harris used to play bowls and that the family owned an allotment. Another neighbour who asked not to be named, said: ‘They are very quiet people and keep themselves to themselves. The Harris family had a campervan which you used to see them go out in all the time. Margaret was quite feeble. It’s awful to think what has happened. It’s normally so quiet around here. I saw their son walk past and he was on the phone and said that Sharon and his mum were dead.’ Another neighbour said that Sharon Harris used to work at the Salter scales warehouse in Tonbridge.

A spokesman for Kent Police said: ‘Two women, aged in their 50s and 70s, died at the scene. A man in his 70s was taken to a London hospital for treatment. Officers arrested a 28-year-old man on suspicion of murder. He remains in police custody whilst enquiries continue. It is believed the victims and the suspect were known to each other. The victims’ next of kin have been made aware.’