Louise Stevens, 54, of Littleover, Derbyshire, has appealed the £100 parking fine

A furious mother has accused an airport petrol station of ‘profiting from innocent people’ after she became the latest motorist to be slapped with a £100 parking fine for stopping there.

The owners of the BP station at East Midlands Airport in Leicestershire have been issuing fines to deter people from using it as a pick-up and drop-off point.

But Louise Stevens, 54, from Littleover, Derbyshire, said she had done nothing wrong and has appealed the fine.

Miss Stevens said she parked at the petrol station last month for two minutes so she could get a quick bite to eat.

She then claims she went to the short stay car park to pick up her daughter and her friend, who had been on holiday in Portugal.

Weeks later Miss Stevens was shocked to discover she had received a £100 parking bill through her door for ‘stopping at a zone where stopping is prohibited’. 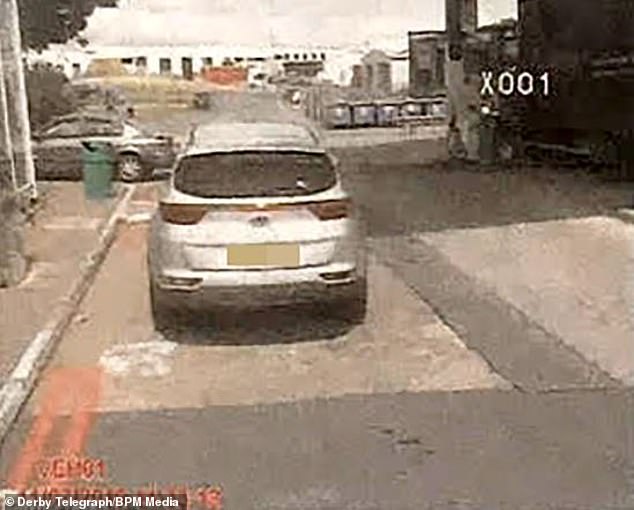 CCTV images on her letter from Vehicle Control Services Ltd show her car parked near double red lines, but not on or next to them

But this has angered Miss Stevens, as she parked in an area which had no red lines or signs next to it.

CCTV images on her letter from Vehicle Control Services Ltd show her car parked near double red lines, but not on or next to them.

Miss Stevens said: ‘I received a fine for stopping to buy some lunch prior to picking up my daughter and her friend.

‘To add insult to injury, I then proceeded to the airport short stay car park where I paid to pick them up. 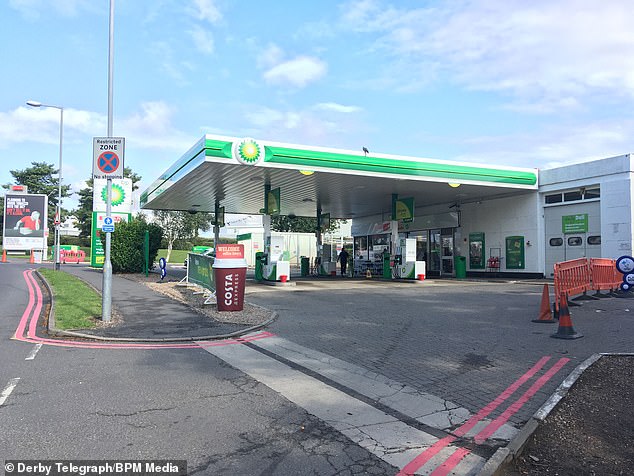 ‘I was literally a few minutes in the petrol station and parked in the only place I could see there were no red lines, however they are saying I am parked illegally. This is just daylight robbery.

‘This petrol station is profiting from innocent people and should be held accountable. How can you possibly issue fines to customers of your business?

‘I can understand the airport fining people for stopping on the road, however the petrol station is really just one step too far.’

Miss Stevens is the latest in a host of motorists to express their anger over a parking fine from the owners of the petrol station. 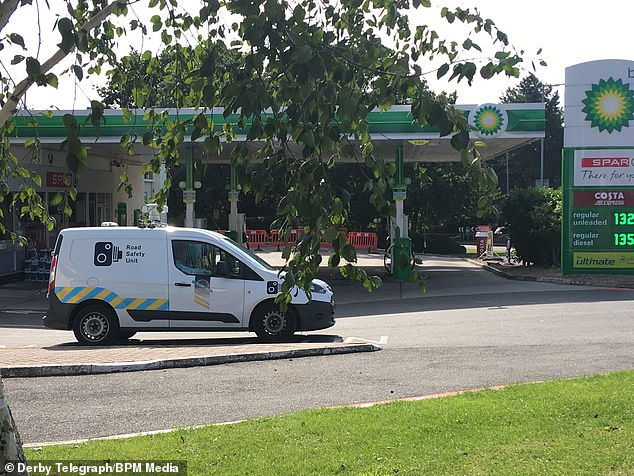 The owners of the petrol station and East Midlands Airport said picking up or dropping off people at The Fuel Station is strongly prohibited and several signs stating this have been up since June.

Sharon and Geoffrey Palmer, both 69, stopped to fill their car at the airport’s petrol station on July 11 before being dropped off at the rapid drop-off zone, where their daughter drove the car home.

But on their return from a week-long holiday in Salou, Spain , they were horrified to find a £60 fine, rising to £100 if left unpaid.

Gordon Jackson from Chellaston and Tajdar Kamal from Normanton were heavily critical after being fined after being seen picking up airport passengers in their cars. 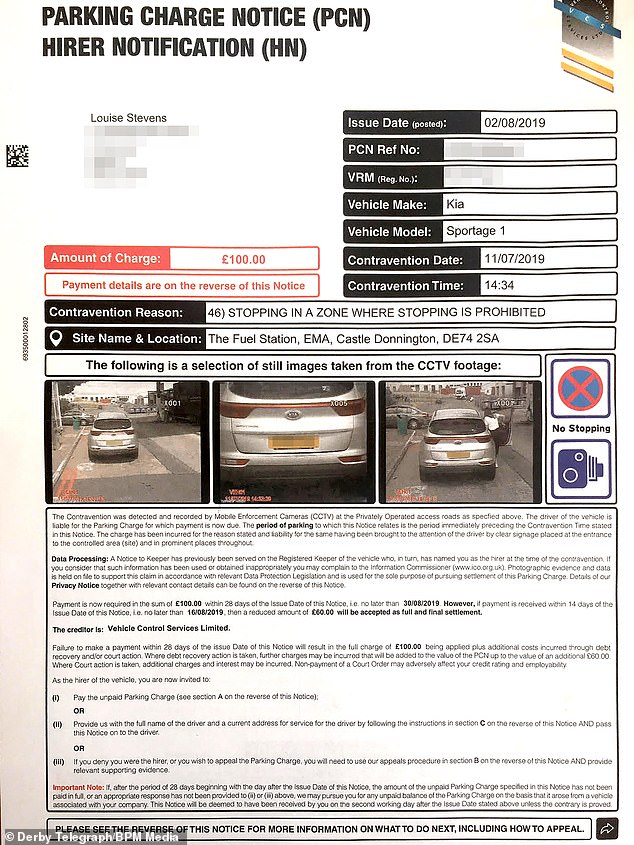 And earlier this month, Ruth Pickering, from Clifton, Nottinghamshire, said she would refuse to pay her fine.

But Miss Stevens insists she never picked up her daughter from the station and actually paid £4 to park in the short stay car park.

A spokesman for Vehicle Control Services Limited, which issued the fine, said: ‘We would advise Ms Stevens to utilise our appeals procedure so that her circumstances can be fully and appropriately evaluated, details of how to appeal are set out on the reverse of the Parking Charge Notice.’

The Prax Group, which owns the petrol station, said the behaviour of some motorists was having a ‘negative impact on the business’ and defended issuing fines for those picking up or dropping airport passengers at the station rather than paying to use the airport car parks. 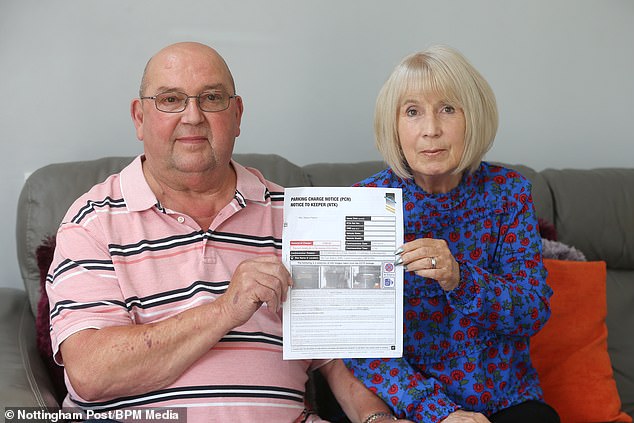 Sharon and Geoffrey Palmer (pictured with their penalty notice on August 8), both 69, were also recent victims of the airport’s strict parking regulations

A spokesman said: ‘In order to avoid paying to park, some passengers and taxi companies are using the airport filling station, located approximately 100 yards from the terminal, as a pick up and drop off point.

‘Increasingly, this is having a negative impact on the business, which can no longer be ignored.

‘Additionally, there is a serious health and safety concern, as the backlog of traffic onto the main road could potentially hinder the emergency services. ‘

A spokesman for East Midlands Airport said: ‘Parking or waiting on roads across the airport estate has always been prohibited. 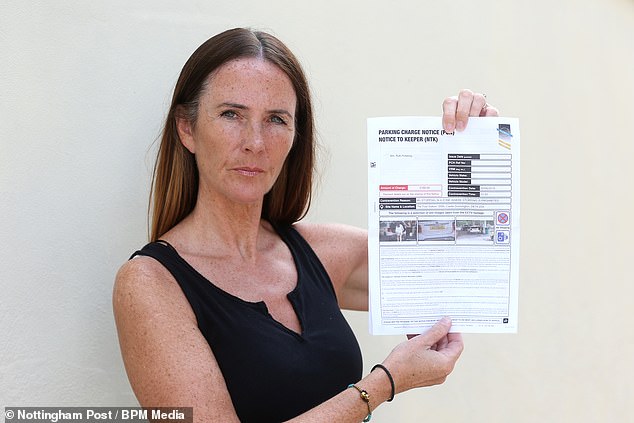 Ruth Pickering (pictured on August 5), 52, received a £60 fine for stopping in a ‘no stop’ zone at East Midlands Airport. The fine will rise to £100 if not paid within 14 days

‘While this was previously indicated by double yellow lines, all roads are now red-routed and are enforced by a third party organisation.

‘The same compliance company also has a separate agreement in place with the petrol station.

‘The safety of people visiting and working on the airport site is our number one priority.

‘Over 8,000 people are employed across the airport estate and thousands of passengers arrive and depart each day from the airport. Everyone who comes to the airport, needs to be safe.

‘Controlling traffic flow on the roads throughout the site is key to ensuring people’s safety and enjoyment of visiting EMA. 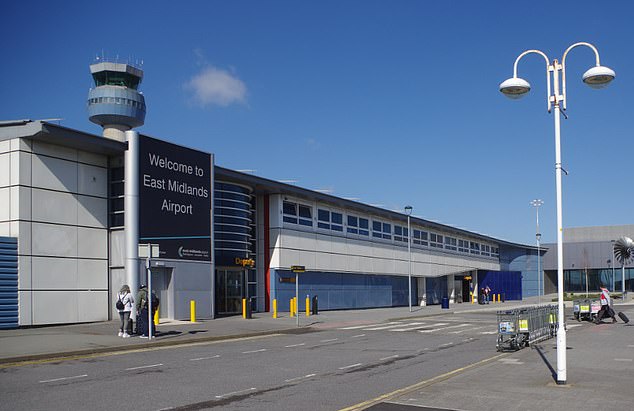 ‘Vehicles waiting in undesignated parking areas when dropping off and collecting passengers not only causes congestion, but is dangerous for both drivers and pedestrians.

‘Likewise, dropping off and picking passengers up at the petrol station poses a risk to safety.

‘All drivers dropping off and collecting passengers at EMA should use the designated car parks and drop-off facilities.

‘Ten minutes parking in rapid drop off costs £3 while 30 minutes in Short Stay 1 car park is £4.

‘For those wishing to stay longer, one hour’s free parking can be had in Long Stay 2 which is ideal for drivers collecting passengers.’

A number of airports around the UK have introduced free ten-minute drop off points including Norwich, Cardiff and Inverness.