Mother buys nothing new for her family for a YEAR

A woman dubbed ‘Britain’s most frugal mum’ has succeeded in buying nothing new for an entire year in a bid to cut down on waste.

Katie Musgrave, 33, from Loddiswell, Devon, made the pledge on December 1, 2016 after becoming sick of the amount of barely-used equipment, clothing and toys that were being stored in her home.

She banned herself from purchasing anything new for herself or her children Eliza, four, and Ariadne, two, for 12 months – apart from food and nappies – and has succeeded apart from one ‘blip’ after buying shoes for her daughters.

The thrifty mother scoured the internet for pre-loved toys and snapped up second-hand clothes at charity shops for 12 months – saving herself a fortune in the process.

Katie Musgrave with her daughters Eliza, four, and Ariadne, two, at their home in Loddiswell, Devon. The frugal mum has gone a whole year without buying anything new for her children

But after reaching her 12-month target at the beginning of December, Katie, who is currently pregnant with her third child, decided that trawling round charity shops for gifts was too tiring.

As such, she has given in and bought some Christmas presents as new, but insists she still snapped up some gifts second-hand.

Katie, a GP registrar, said: ‘With Christmas and birthday presents I’ve saved a few hundred pounds alone. Some people could probably save thousands and thousands.

‘Buying gifts wasn’t too difficult, most of our family were open to accepting second hand presents, and I made the effort to look around charity shops until I found presents of high enough quality. Books were quite good.

‘This year I’ve gone 50/50, because I’m quite heavily pregnant I’ve had to do shopping online, some has been on eBay but some of it has been from Amazon. We’ve bought sit-on cars for my children from eBay.’ 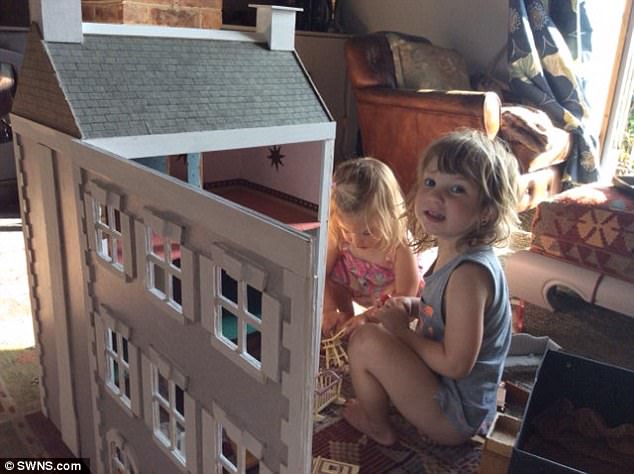 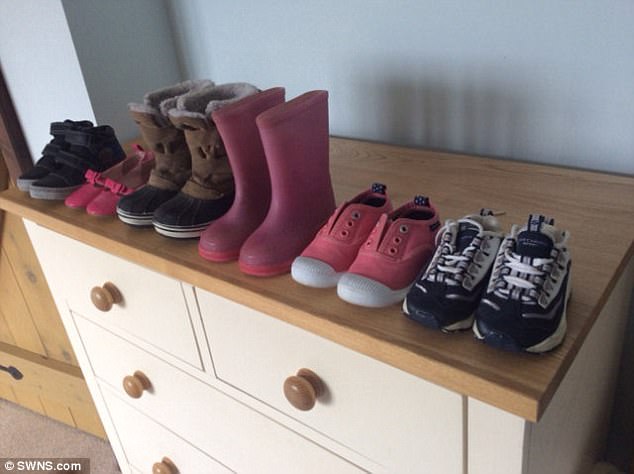 Thrifty: A selection of second hand shoes all found nearly new in local charity shops which Katie Musgrave gave to her children 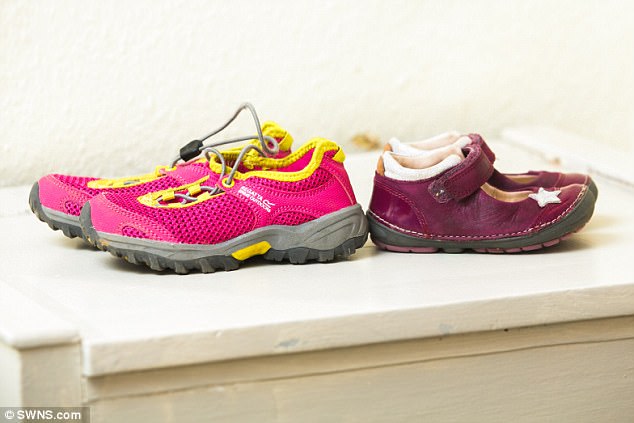 Exception to the rule: These shoes are the only items Katie Musgrave has purchased new for her children in the last year after vowing to only buy second-hand toys and clothes

Katie, who is now expecting her third child with GP husband Chris, 36, managed the whole year with only one ‘blip’.

She bought a pair of Regatta trainers for her eldest, and a pair of leather shoes from Clarks for her youngest.

She bought both of them in sales, however, at just £30 for both pairs.

Katie added: ‘In terms of clothes, toys, equipment, I’ve not bought anything new for me and the children, except for the shoes for the girls, everything else has been second hand.

‘It went pretty well, in all we spent a whole year without buying anything for my girls. 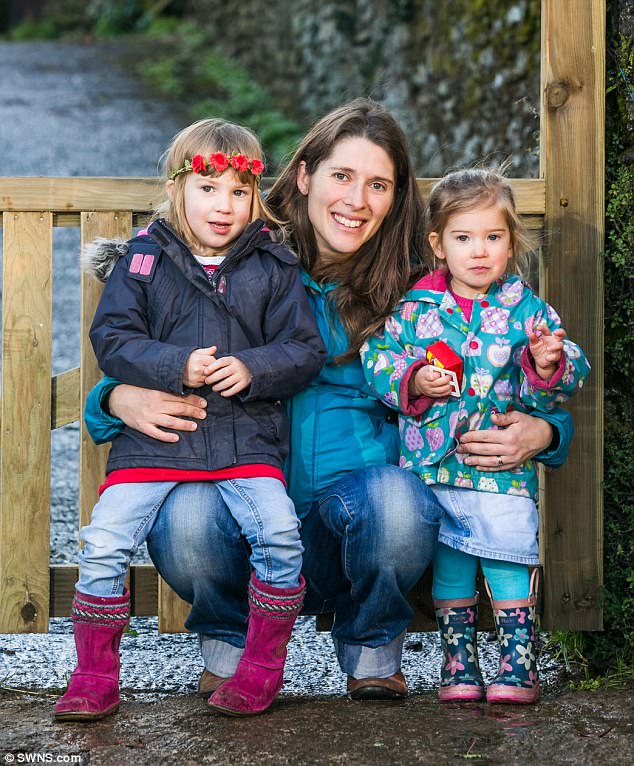 Katie, who has been dubbed ‘Britain’s most frugal mum’ and vowed to go a whole year without buying anything new for her and her children has succeeded – except for one blip 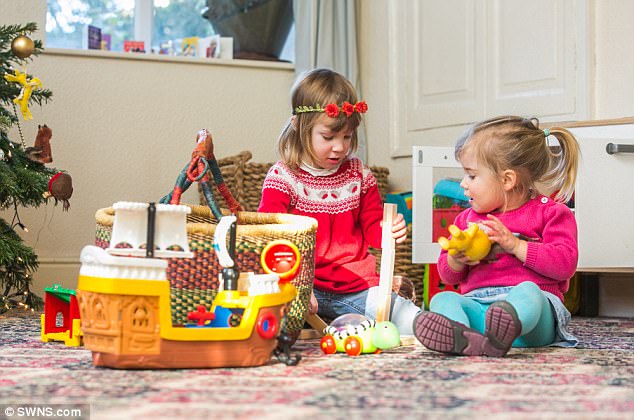 Eliza, four, and Ariadne, two, play with their second-hand toys at their home in Loddiswell, Devon. Mum Katie vowed not to buy anything brand new for a whole year

‘I bought both girls a pair of shoes in the summer because they had outgrown theirs and I wanted them to have some comfortable shoes they can wear day in day out.

‘Other than that we have had a year of not buying anything new, myself also.’

‘It wasn’t that challenging’: How Katie scoured the internet and charity shops

Katie added: ‘It was fine, we went round charity shops and had hand me down from friends and family and bought things from eBay.

‘It genuinely wasn’t that challenging, we went to charity shops every three weeks or so and we bought things second hand. 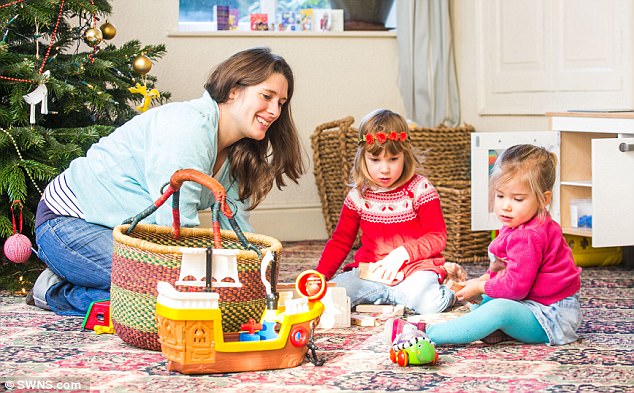 Katie banned herself from purchasing anything new for herself or her two kids Eliza, four, and Ariadne, two, for 12 months – apart from food and nappies 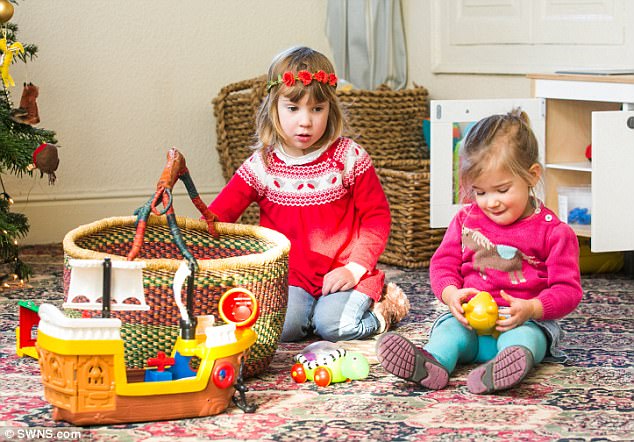 Thrifty Katie made the pledge after becoming sick of the amount of barely-used equipment, clothing and toys that were being stored in her home

‘I’ve not had any problems and my children haven’t gone without at all.’

Katie said that with just a little effort they were able to live a life better than when they were more frivolously spending money.

She said: ‘I don’t think they noticed at all, in some regards we had nicer quality clothes and toys throughout the year. I made more effort to look for decent quality things.’

‘By saving money month by month we were able to go on a nicer holiday with them, we took them skiing for the first time – with second hand ski suits for all of us,’ says Katie.

‘My husband sorted himself out, so he bought new things, but I didn’t find it difficult at all. I bought myself a ski jacket second hand and a new winter coat, both were £5.

‘Other than that I’ve just been buying bits and pieces throughout the year without any difficulty.’ 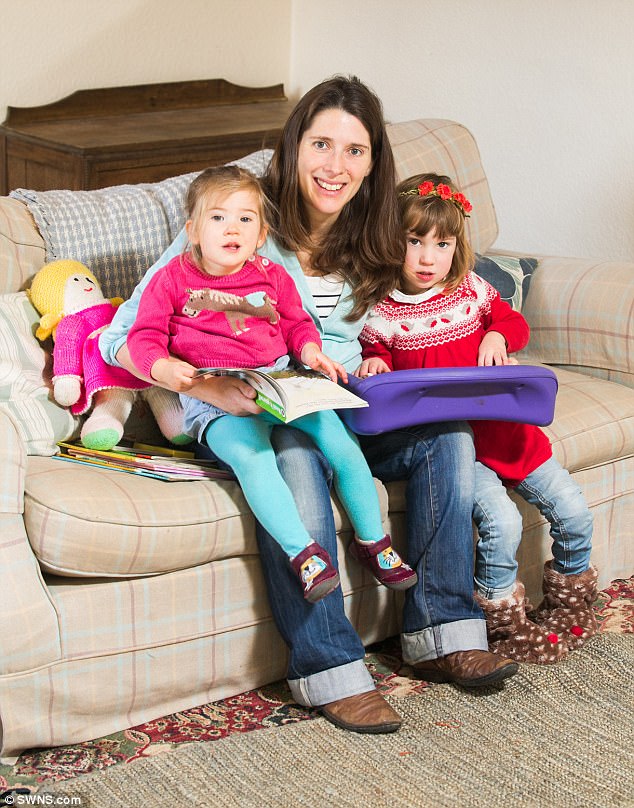 A year on, Katie has succeeded by sourcing all items needed from charity shops and online second hand stores except for buying her daughters a pair of shoes in summer

Throughout the year Katie believes she has saved up to £700, but says less frugal parents would save a lot more if they tried her lifestyle.

She continued: ‘I’ve saved a fortune; at Christmas last year I spent £20 for my two and four year old, and likewise birthdays.

‘I’ve bought them present for less than £10 and they’ve had several things to unwrap.

‘We’ve had no end of stuff, but it’s stuff I’ve either bought online or found in charity shops.

‘I would probably say I’ve saved around £500 to £700, but I’m probably more frugal than other people ordinarily.’

‘I think the idea is widely spread that children need new clothes and toys and the latest furniture for their bedrooms, but they absolutely don’t.

‘Twenty to 30 years ago we all wore hand-me-downs, but I think lots of companies now try to encourage people to buy things they really don’t need and spend money that people with small children don’t actually have to spare. 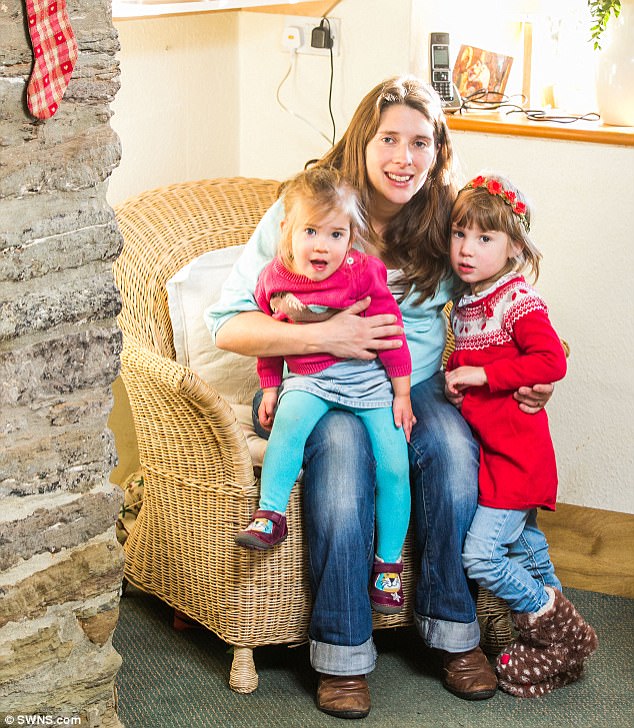 Katie realised that her children were getting through clothes at a lightning pace, and that her garage and attic were quickly filling with discarded items that had barely being worn

‘Lots of children would find it easy to provide everything their children need without buying anything new.’

Katie launched her web project called One Baby Owner as a place for parents to sell nearly-new items that their young ones have outgrown.

She added: ‘At the moment I think it’s crazy that there isn’t anything functioning nationwide for children’s ware, there are so much clothes sat in attics and garages.

‘There must be 5 million parents out there who could sign up. I think there is a massive audience out there.

‘There is a real need for it, my challenge is to get some investment so we can really get things going.’

One Baby Owner is due to be re-launched in spring.