A mother who has been accused of neglect for leaving her five-week-old daughter with her grandmother shortly before she fell ill has hit back at social media trolls.

Zoe Wallace, 25, from Leigh in Wigan, has racked up over 36,000 followers on TikTok from posting ‘relatable’ videos about her life as a busy mum raising two children.

One of her latest videos received over 7 million views, which led to a torrent of abuse from trolls voicing concerns about her parenting style.

The clip shows Zoe talking about her daughter Parker falling ill with RSV – also known as respiratory syncytial virus – which is a viral illness that causes symptoms such as breathing problems and can lead to more severe bronchiolitis and pneumonia in young babies.

She describes how Parker, who is now four-months-old, had to be moved from A&E to a high dependency unit where she was put on a machine to do the breathing for her.

Zoe Wallace, 25, from Leigh, Wigan, has hit back at trolls who accused her of neglect for leaving her five-week-old daughter Parker (pictured) with her grandparent 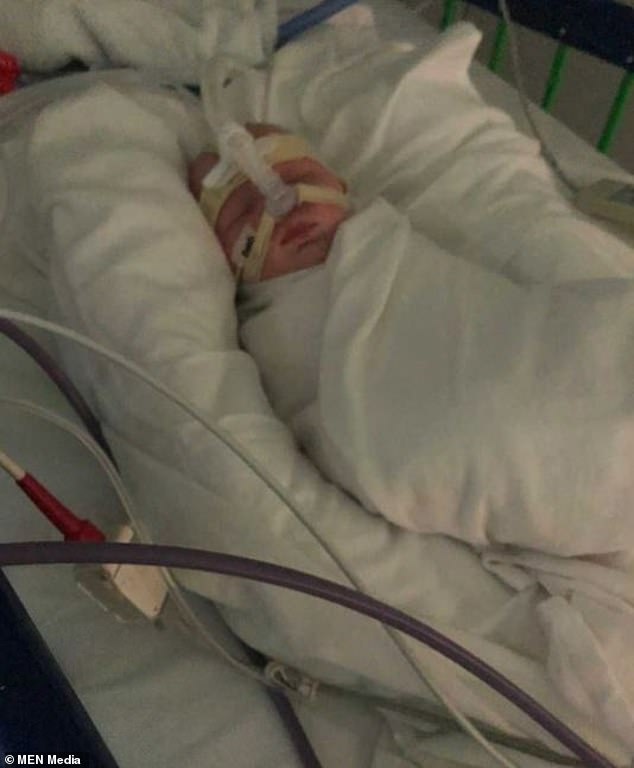 Zoe, who boasts over 36,000 followers on TikTok, began being trolled after revealing Parker had stayed with her mother shortly before falling ill with RSV. Pictured: Parker in hospital

Parker was diagnosed with a severe chest infection but thankfully began to recover with the help of antibiotics.

Zoe explained in the video, saying: ‘I hadn’t held my baby for a week but doctors finally let me hold her. After a week in hospital, they said I could finally bring my baby home. I feel very lucky that she is still here.’

However, instead of sympathising with her, many TikTok users blasted Zoe for letting Parker have her first sleepover at her grandmother’s house the night before she fell ill – despite being just a 10-minute car journey away.

One wrote: ‘Jesus, five weeks and you are done with it already? Poor child isn’t gonna grow up the best.’ 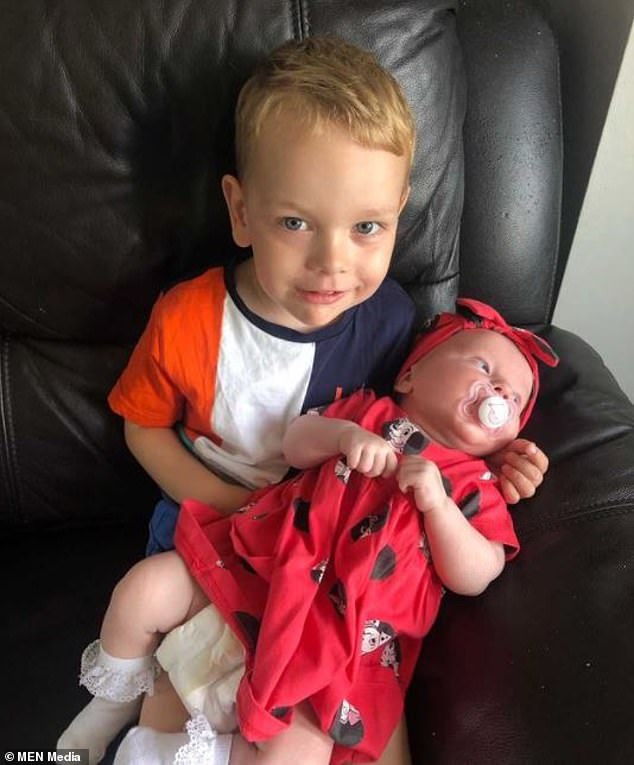 Zoe admitted she regrets telling her followers that Parker had stayed with her mum, although she thinks it’s normal for new mums to receive support from family. Pictured: Dominic and Parker

RSV – the very common virus that affects almost all children

Respiratory syncytial virus (RVS) is a common virus which affects almost all children before they reach two-year-old.

In older children and adults, the virus can cause colds and coughs, which ca take up to two weeks to go away.

In young children and the elderly, according to the NHS, it can cause bronchiolitis.

Bronchiolitis is an infection that occurs when the virus reaches the smallest part of the lungs, called bronchioles.

In the Unite States, RVS is the most common cause of pneumonia (infection of the lungs) in children younger than 1 year of age.

People infected with RSV usually show symptoms within 4 to 6 days after getting infected. Symptoms of RSV infection usually include:

A specific treatment for RSV doesn’t exist, however vaccine research is taking place, as well as the development of antiviral medicines.

‘This is neglect. How could you do that to your newborn,’ another said.

Zoe has since posted a video hitting back at the ‘hurtful comments’ and said: ‘I posted the video originally to share my daughter’s story with RSV.

‘It made her very poorly and I was unaware how serious it could be in newborns. I hadn’t even heard about it until she was poorly and I wanted to make other mums aware of the signs.

‘I had mentioned that she stayed with my mum the night before falling ill to show how quickly she declined but it wasn’t taken that way. People in the comments have branded me a bad mum because of my decision to allow my mum to have my child over night.

‘To me, personally, it’s pretty normal for new mums to get support in anyway from family members but I didn’t know it would be so controversial online. I do regret mentioning her staying at my mum’s because of the hate I have received, but I don’t regret sharing my daughter’s story, because it could help save another child’s life.’

Zoe, who also has a three-year-old son Dominic with partner David Hunt, 38, described some of the worst abuse she received.

‘The most hurtful are that I’m neglecting my children, I’m a bad parent, that my daughter deserved to die, because she wouldn’t have bad parents,’ she said.

‘That I don’t deserve children or I shouldn’t have children if I’m too lazy to look after them.

‘The main hate I received was along the lines of “how could you leave your baby”? It just shocked me how it’s encouraged as a new mum to accept help from people you trust, because it can be overwhelming, but as soon as you do it’s seen as neglectful.

‘I think the video going viral has proven the double standards for mums, there’s a lot of mum shaming and I don’t think it’s fair.’ 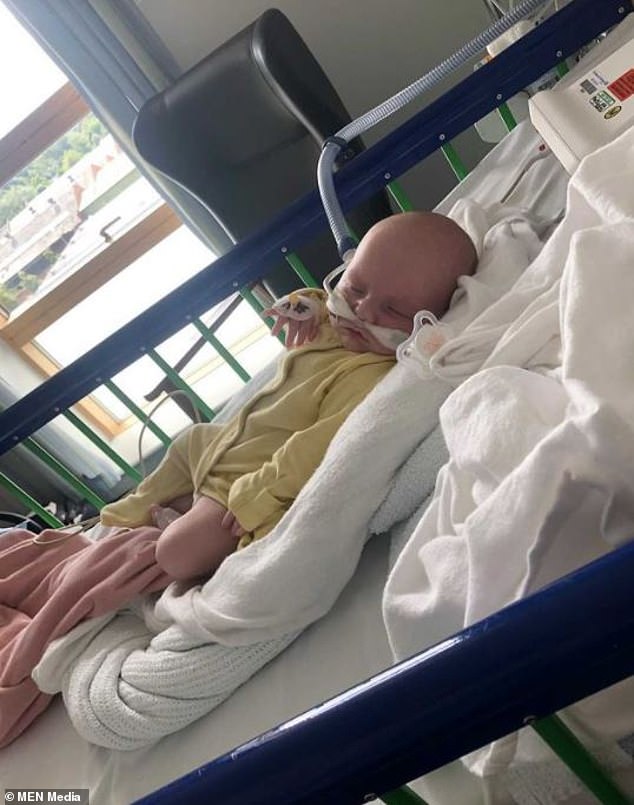 Zoe said the most hurtful comments have accused her of neglecting her children and being too lazy to look after Dominic and Parker (pictured, in hospital)

Zoe, who is on maternity leave from her job at McDonald’s, said she’s been more willing to accept help from her mum with Parker as she was reluctant with Dominic despite suffering from postnatal depression.

‘Dave works in a warehouse and does 12-hour shifts so I’m on my own a lot of the time,’ she explained.

‘My mum has always been very hands-on and involved. With Dominic I struggled lots and even though I had postnatal depression, I couldn’t see it, and I wouldn’t accept the offers of help. This time I just thought if people are willing to help, then I’ll accept it.’ 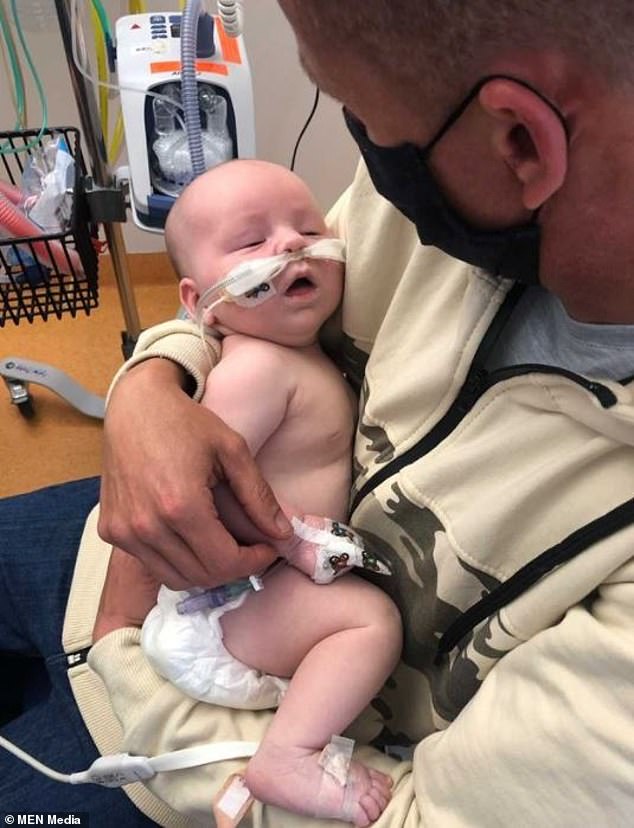 Zoe said she struggled with postnatal depression following Dominic’s birth, which has made her more open to accepting help. Pictured: Parker with dad David in hospital

She says she won’t let what’s happened stop her from doing what she enjoys.

‘It was about April 2020 when I properly started posting things on there all the time,’ she said. ‘The main reason I started was to just be positive and to share relatable videos for other mums.

‘Even though I did get some supportive comments on the video, the majority were hate. A lot of them came for my appearance too, but I just blocked them so I couldn’t see it.

‘I think maybe it’s the way I worded it by starting off about her staying with my mum and people haven’t bothered listening to the rest, but I just said it the way I would if I was having a conversation with someone. 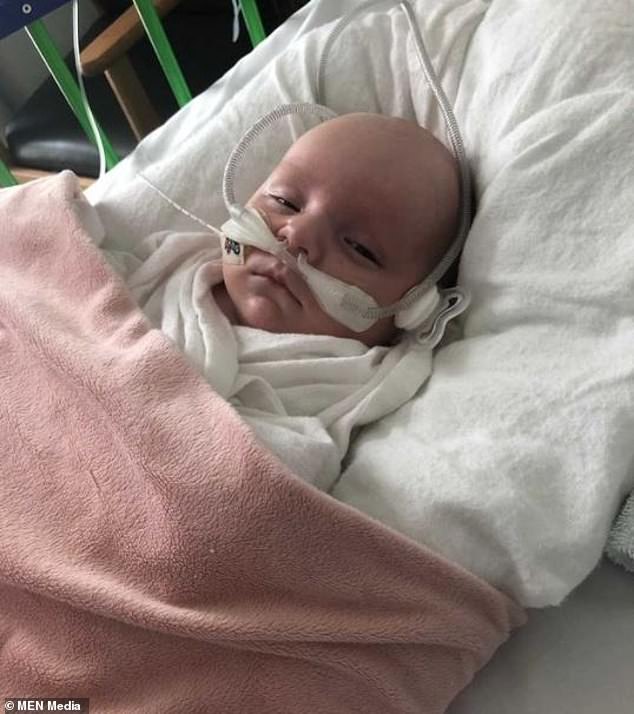 Zoe said she received some supportive comments from her viral video and has blocked negative comments about her appearance. Pictured: Parker in hospital

‘Anything you put online is going to get criticised, but people don’t have to be nasty about it when they give their opinion.’

She added: ‘I will carry on with it because at the end of the day it’s my choice ultimately – my kids are fine and my kids are happy. They love spending time with my mum and what other people think is not going to change that, or change what I’m posting either.

‘I have people who follow me and they chat to me daily and say they like seeing the content so I won’t let this stop me.’ 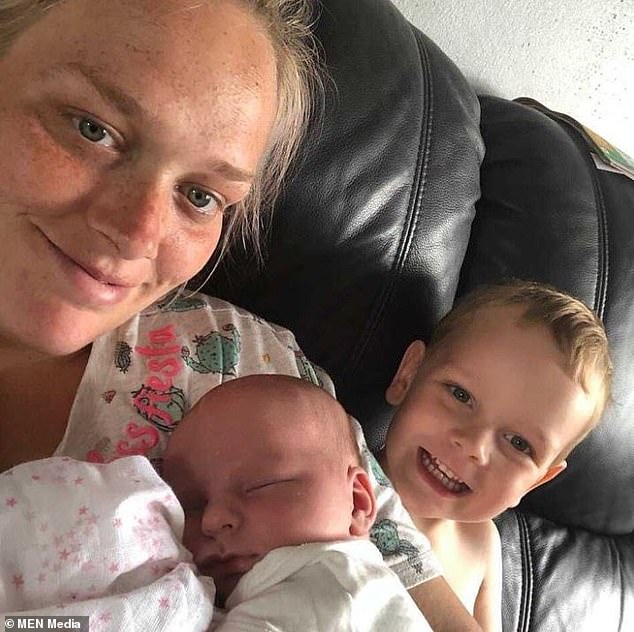 Zoe said she will continue to share her life online because her children are happy and enjoy spending time with her. Pictured: Zoe with Parker and Dominic