Two crafty brothers caused mayhem by breaking a child lock and stealing a bag of flour from their kitchen cupboard.

Mum-of-four Sam Sherwood, 39, had nipped out to the garden on Thursday when she returned to the entire ground floor of her home in Oxfordshire covered in white paste.

Her two young children, Jacob Lack, 3 and Reggie Lack, 18 months, had broken into the cupboard, knocked over the dog’s water bowl and strewn flour all over Sam’s kitchen, hallway and living room.

Cheeky chaps: Jacob, 3, (pictured) and his brother Reggie, 18 months, wreaked havoc with flour in their home when their mother nipped into the garden 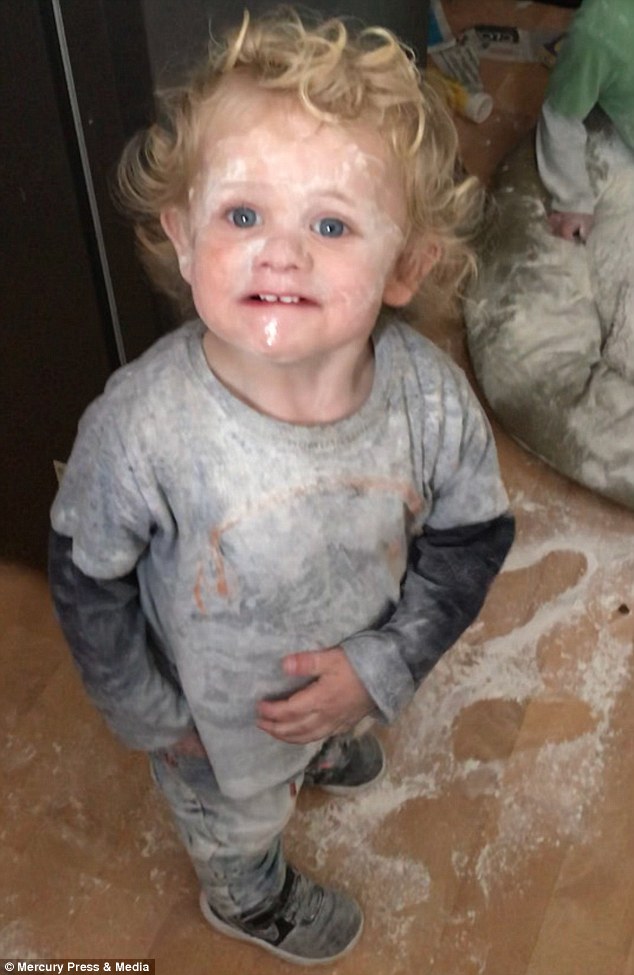 Caught red handed: When the boys’ mother Sam Sherwood came into the kitched, Jacob said, ‘Not me, Reggie did it’ (pictured: Reggie Lack)

The waitress claims all she could do was ‘laugh or she’d cry’ and that Jacob later tried to help her clean up by sucking up all the water from the toilet with her brand-new hoover.

In the video, the bright-eyed toddlers stare at the camera with flour all over their clothes and faces, as their mother assesses the damage.

Sam, from Wallingford, Oxfordshire, said: ‘I’d nipped outside for just a few minutes and when I came back in, I saw the flour sprinkled on the floor. 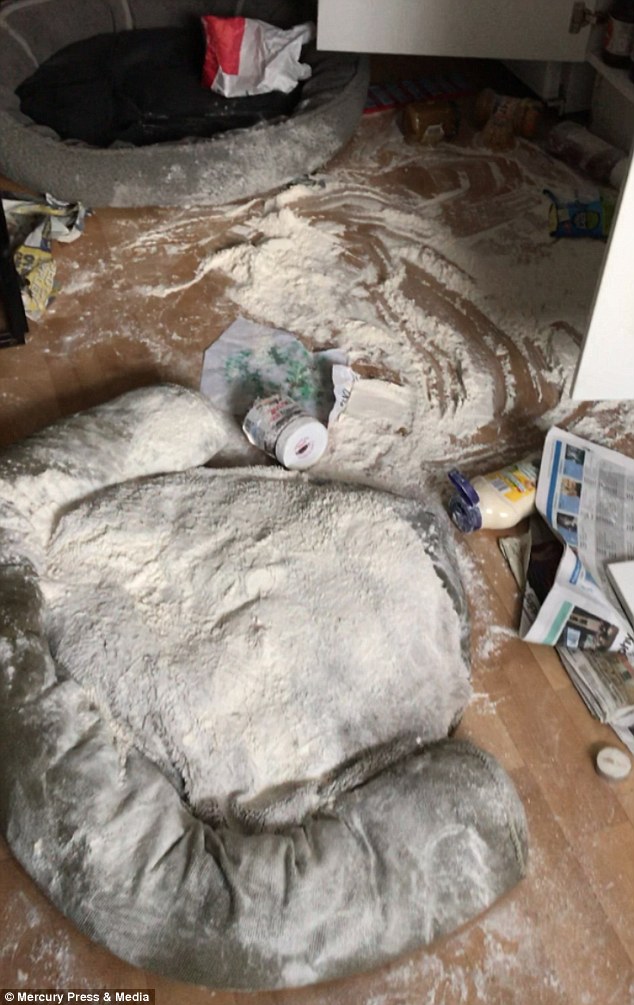 The family had bought the flour for pancake day, and when Sam nipped to the garden for a few minutes she came back to find flour strewn across the floor

‘We’d bought the flour for Pancake Day and it’d been in the cupboard with a child lock on it but they managed to get into it anyway – the crafty things.

‘It was one of those things where I knew from experience that it was about to get much worse as I went round the corner so I started filming.’

Cautiously walking around the rooms of her house, Sam knew to expect the worse. 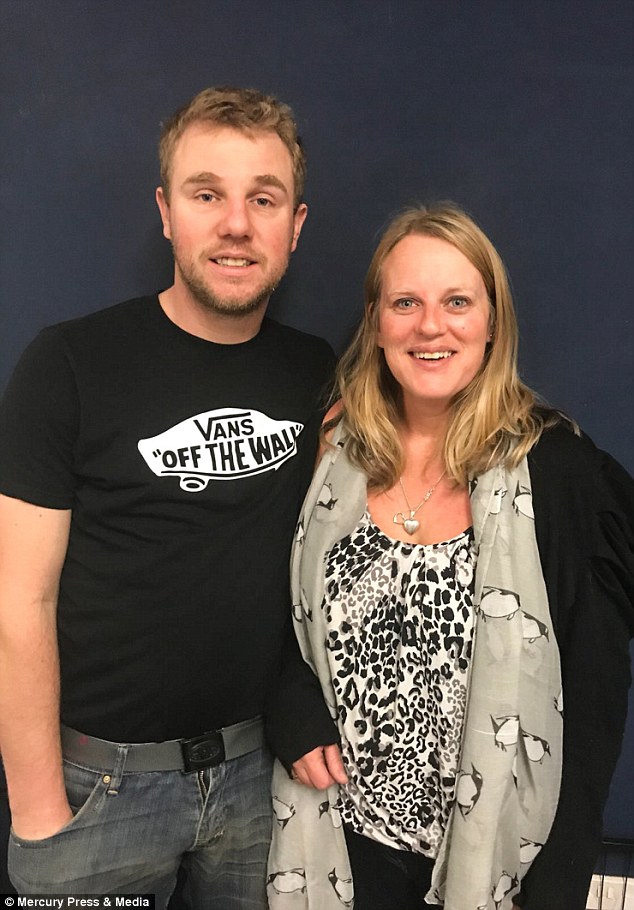 The mother-of-four claims she couldn’t help but laugh and when her partner, Richard Lack, came home from work, he jokingly asked if they’d be baking that day

As she entered the kitchen, her dog’s bed and both her children were covered head to toe.

Sam said: ‘When I got into the kitchen Jacob said ‘not me, Reggie did it’, then Reggie looked at me and just said ‘flour’.

‘It went all through the living room, hallway and kitchen.

‘Whoever said to have kids together because it’s easier was wrong. I just had to laugh or I’d probably cry.

‘My friends often tell me I should write a blog about all the mischief the boys get up to on a daily basis. 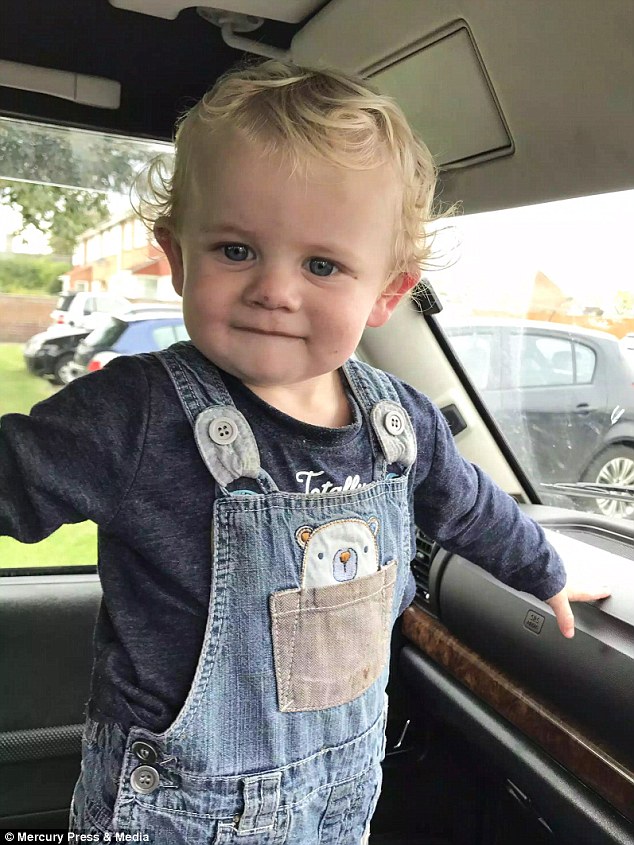 The clean-up surprisingly did not take too long, and Sam explained that with a hoover the clean only too about 20 minutes, but there are still specks of flour dotted around

‘They’ve done this before with a kilo of rice. We had fun with that and played with it for an hour before cleaning up.

‘The flour had mixed with the water from the dog’s bowl and formed a lovely paste, they enjoyed playing in this too.’

Luckily, the clean-up didn’t take too long. Sam claims she couldn’t help but laugh and when her partner came home from work, he jokingly asked if they’d be baking that day.

Sam said: ‘In the end it was quite easy to hoover it up and took about 20 minutes to give it the once over, but there’s still little bits of flour around. 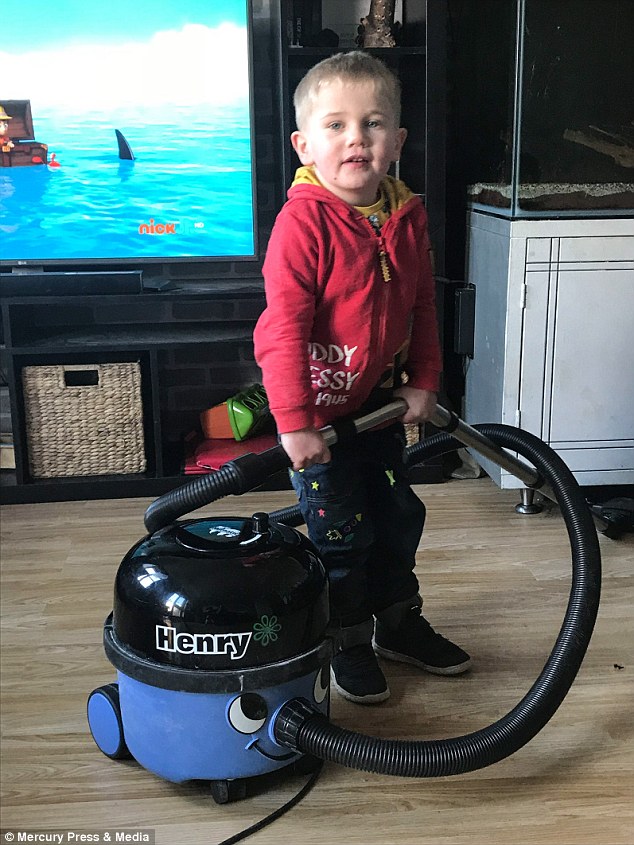 Sam explains that three-year-old Jacob tried to take part in the clean up: ‘Jacob thought he was helping me by sucking all the water out of the toilet. Anything that could have gone wrong that day went wrong’

‘Jacob thought he was helping me by sucking all the water out of the toilet. Anything that could have gone wrong that day went wrong.

‘The kids were covered in it, they had to be stripped down and bathed straight away.

‘When my partner Richard [Sherwood] came in, he just said ‘so we’ve been baking then having we?’ He’s just used to it now.

‘The youngest two are always getting up to no good together. I just hope by sharing this it makes a few other mums giggle.’