A mother-of-one lost both of her legs to meningitis, after mistakenly thinking her vomiting and cold flushes were caused by a spiked drink.

Sarah Hayward, of Wigmore, near Gillingham in Kent, was forced to go home early from a night out with friends in November 2017 after feeling ‘delusional’.

The 51-year-old was found semi-conscious dangling out of bed the following day by her daughter and rushed to hospital, where she had a heart attack and her organs started to fail.

Two weeks later, the mother regained consciousness from a coma – but doctors were forced to amputate both of her legs below the knee.

The aggressive ‘W’ strain of meningitis had stopped blood and oxygen getting to her legs, causing the skin and underlying tissue to die.

Sarah Hayward, 51, had both of her legs amputated after mistakenly thinking meningitis symptoms were caused by a spiked drink 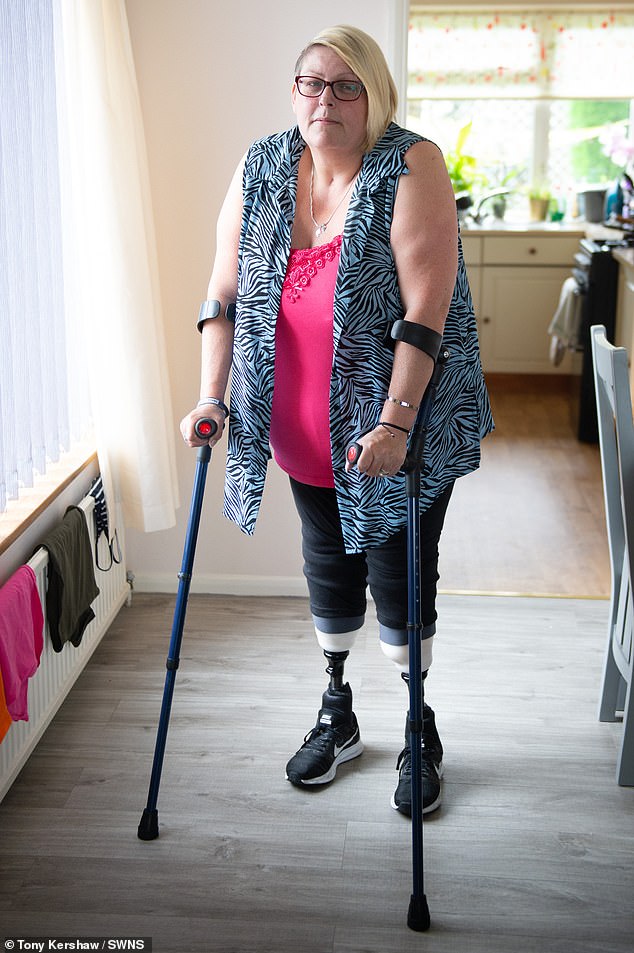 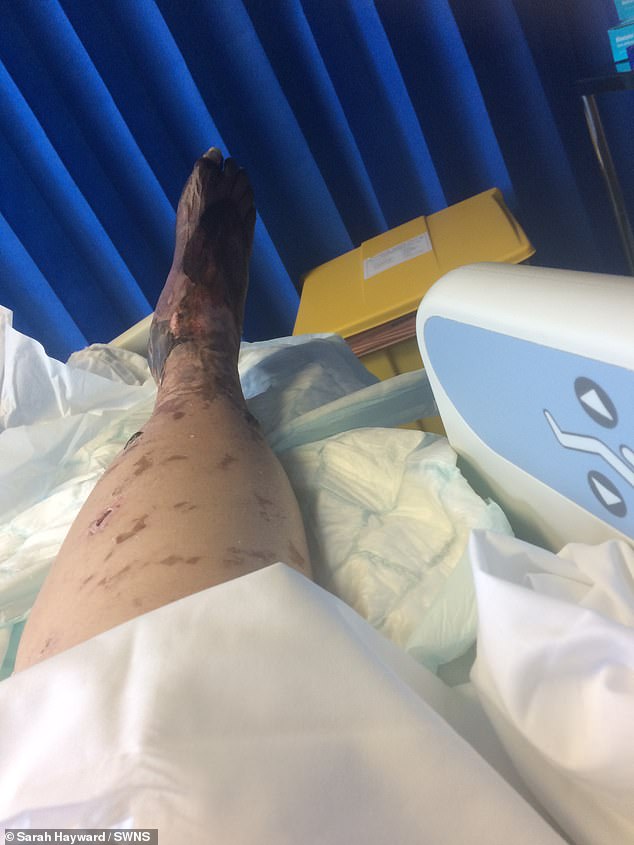 Pictured: Ms Hayward’s leg and foot during her time in hospital

Recalling her ordeal, Ms Hayward said: ‘I only had one drink at the pub, a vodka and Diet Coke. It is the only drink I like.

‘I know what it’s like when you’ve had a few too many, but I had only had one. That’s why I thought that particular drink had been spiked.

‘I remember being in the bathroom and feeling completely out of it. I have very little memory of it; it’s just what friends have told me since.

‘It was clear something was up so a friend dropped me home. I thought my drink had been spiked, so I thought I’ll just go to bed and I’ll be absolutely fine in the morning.’

She added: ‘It was a completely different feeling in the morning. I still didn’t feel very well, but was no longer delusional.

‘I said “goodbye” to my daughter, who was leaving for college, and that’s the last thing I can remember.

‘My daughter, who was only 16, started to get concerned that she couldn’t get in touch with me.

‘We are very close and she knew something was wrong so she got her course tutor to drive her home.’

The college student found her mother semi-conscious hanging out of bed and called for an ambulance. 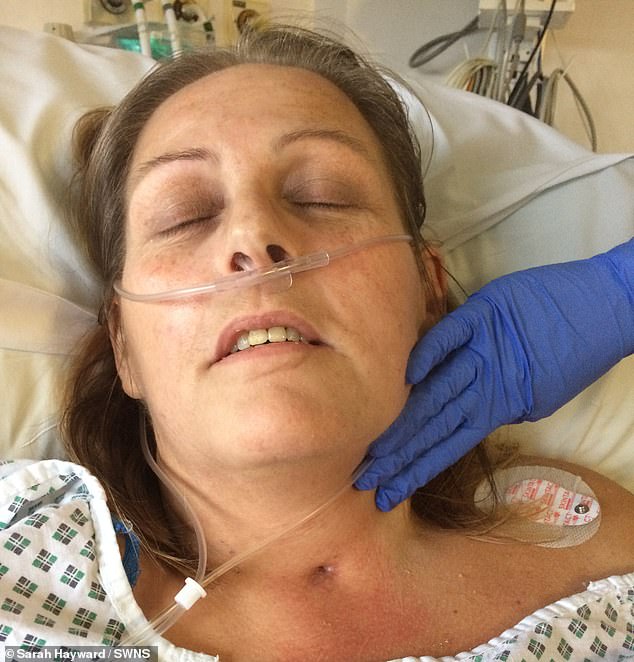 Ms Hayward, from Kent, was forced to go home early from a night out with friends in January 2018 after feeling ‘strange’ and ‘chilly’. She was rushed to hospital the next day where she had a heart attack and her organs failed 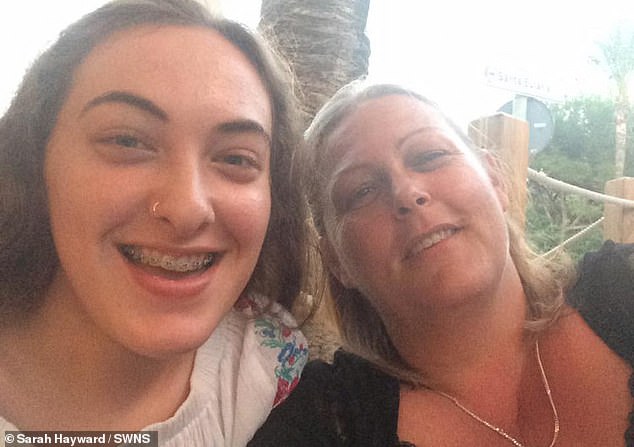 Her daughter had found her dangling from the bed, semi-conscious, and phoned an ambulance

Ms Hayward added: ‘She saved my life. If Ciara hadn’t realised something was up, the outcome could have been much worse.

‘I was ignorant to meningitis before this happened to me. If I had been better informed I may have known to look for the discoloration in my legs instead of going straight to bed.

‘Before contracting meningitis, I assumed the rash was the telltale sign.

‘But there are so many other symptoms that I didn’t appreciate – like cold hands and feet, vomiting, a high temperature and just the general feeling of not being with it.’

This infection causes these membranes (the meninges) to become inflamed, which in some cases can damage the nerves and brain.

It is considered a medical emergency and can lead to death, or long term complications like limb amputations and blindness.

In the UK, six different strains of bacterial meningitis – A, B, C, W, X, and Y – cause the most disease.

For decades meningococcal B (MenB) has been the main group, and meningococcal C (MenC) was also common until the MenC vaccine was introduced, reducing cases to just a handful each year.

However, cases of meningococcal W (MenW) have risen steadily.

This strain is more deadly with a higher than usual death rate of 13 per cent. It often has different symptoms to other kinds of meningitis.

Several adults with MenW septicaemia have had mainly gastrointestinal symptoms, but without the typical rash that most people associate with meningitis. As as a result, they have progressed rapidly to death.

University students up to the age of 25 are now offered a vaccine to protect against MenW.

It protects against four different causes of meningitis and septicaemia – meningococcal (Men) A, C, W and Y diseases.

The infection causes these membranes, the meninges, to become inflamed, which in some cases can damage the nerves and brain.

It is considered a medical emergency and can lead to death, or long term complications such as needing limbs to be amputated and blindness.

Ms Hayward, who has had prosthetics, now drives a specially-adapted car and lives in a bungalow.

She’s back at work as a hospital administrator after 18 months in which she struggled to come to terms with her new life.

She said: ‘It was like having three shocks, first falling ill, then doctors telling me I would lose my legs and finally dealing with losing my independence and basically being a walking health and safety risk.

‘But when I read the stories of others who had suffered similar experiences it gave me hope and reminded me how wonderful it was to be alive.’

The mother is now helping the charity Meningitis Now with its ‘Adults Get it Too’ campaign which aims to overturn the belief that meningitis only affects babies and young children.

She added: ‘Most people I know are misinformed. We all know the consequences but have assumed that it is something that only affects children.

‘Maybe it’s because parents have been taught to check their kids for symptoms, but not themselves.

‘Meningitis is a killer, and has life changing consequences for the person and everyone around them.

‘I don’t mean to panic people, just to use my story to keep the issue in the public eye and help people be aware of the signs.’

Ms Hayward has since had her older children vaccinated. She said her ordeal has ‘made her stronger’ and now ‘grabs life by the horns’.

‘It has also helped our bond as mother and daughter grow. We now fully realise the importance of being with loved ones.’