Mother has a rare condition that is making her feet shrink

A mother suffers from a disorder that is causing her feet to shrink.

Sophie Earl-Park, 29, has Charcot-Marie-Tooth disease (CMT), which is defined as a group of inherited disorders that damage the nerves outside the brain and spine.

Ms Earl-Park, who wears a size five shoe after previously being a six, has had 14 hip replacements since her birth and fractured her hip in four places while in labour with her son Bentley, now six.

She was told she had Ehlers-Danlos syndromes (EDS), which affects the connective tissue, however, after posting a picture of her ‘curling and arched’ feet on a Facebook support group, a user suggested she may have CMT, in what Mrs Earl-Park describes as a ‘eureka’ moment.

She said: ‘I immediately Googled CMT and found I had all the classical symptoms – my legs are shaped like an upside down champagne bottle, I’ve got hammer toes and high arched feet, swan neck fingers (which means they’re bending inwards) and I’ve got hip dysplasia, which is directly linked to CMT.’ 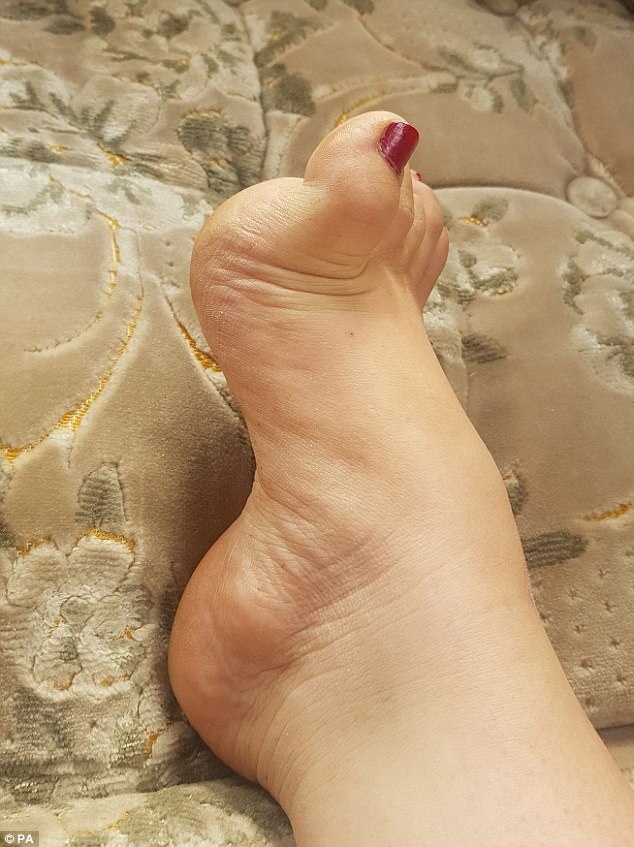 The condition has caused her feet to go down a shoe size, as well as leading to hip fractures

WHAT IS CHARCOT-MARIE-TOOTH DISEASE?

Charcot-Marie-Tooth disease (CMT) s a genetic condition that damages the nerves responsible for passing commands from the brain to the muscles.

CMT affects sufferers’s ability to feel temperature and pain, as well as their balance.

Other symptoms include difficulty walking, muscle tremors, fatigue, curvature of the spine, and loss of feeling and control in the hands and feet.

Foot surgery, breathing support and speech therapy may be required in some cases.

Mrs Earl-Park said: ‘It was such a relief to be diagnosed, as it’s meant I’ve been able to do things differently.

‘I’ve been given a wheelchair for long days out, ankle supports and I’ve also got a mobility scooter to get around, as my CMT is quickly progressing and it’s becoming increasingly difficult and exhausting to walk.

‘Living with CMT can be challenging on a day-to-day basis and being a “normal” mother to my son is hard because I can’t do all the things I want to do with him in the way my peers do with their children.

‘On top of all this, my feet have shrunk from a size six to a five and because my arches are so high, my feet are wide so it’s a struggle to get shoes.’

‘I knew there was something major going on with my body’

Mrs Earl-Park was born with congenital hip dysplasia and has had 14 major hip operations since birth.

When her son was born, her hip socket fractured in four places, which caused her to need one of her many hip replacements.

Mrs Earl-Park said: ‘After the hip replacement I was unable to recover at a normal speed and was made to feel silly by my consultant, but I knew there was something else pretty major going on with my body, as my legs and arms were getting weaker and weaker to the point where I struggled to even hold my son to bottle feed him.’

Three years later, when she was 26, Mrs Earl-Park was diagnosed with EDS.

She said: ‘I joined the EDS Facebook support group and shared a picture of my curling, arched feet and asked if anyone else had the same.

‘A lady messaged me to say my feet looked like hers and she had CMT- it was a eureka moment.

‘I immediately Googled CMT and found I had all the classical symptoms – my legs are shaped like an upside down champagne bottle, I’ve got hammer toes and high arched feet, swan neck fingers (which means they’re bending inwards) and I’ve got hip dysplasia, which is directly linked to CMT.

‘In addition, I have foot drop on both feet that requires me to walk with my legs up high in order to stop them dragging on the floor.

‘Luckily my new GP had seen CMT in other patients, recognised the foot deformities and referred me to a neurologist. As soon as I walked into the consultant’s room he said he knew I had CMT.’ 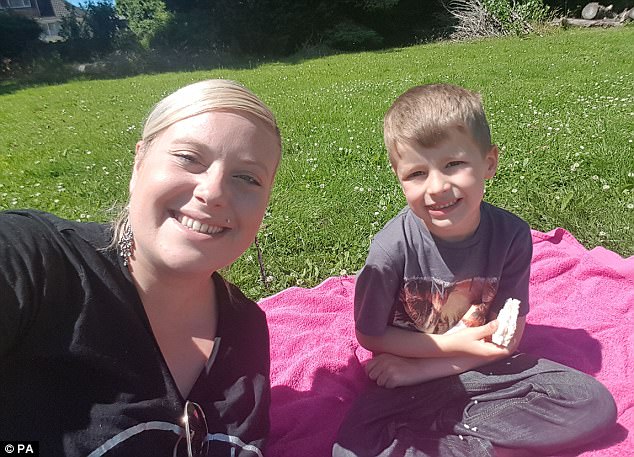 Mrs Earl-Park, who struggles to walk, regrets not being able to do ‘normal’ things with her son

Sign is not being able to wear high heels

The charity CMT UK is raising awareness of the disorder throughout September.

It’s UK chief operating officer Karen Butcher said: ‘Sometimes the symptoms aren’t so obvious, but due to the fact that CMT affects the hands and feet, it could be [sufferers] have trouble balancing, find they regularly trip or fall over and are constantly tired.

‘For some women, a telling sign is that they can’t wear high heel shoes due to high arches and hammer toes.

‘Of course, while all of this could mean so many other things, if you have any of these symptoms then it would be a good idea to ask your GP about CMT.

‘Early, accurate diagnosis can improve the lives of those with the condition as it can be managed more effectively.

‘In addition, because CMT is genetic and there’s a 50 per cent chance it can be passed on from a parent to a child, professional genetic counselling can also be received so the risks to the next generation can be learned.’