Mother has to defend herself from giant bird with a shovel

This is the moment a woman uses a shovel to fend off a giant bird that can disembowel a person.

Heather Waddington, 47, was forced to use the garden tool and even a bale of hay in a bid to shoo the female rhea away as it chased her around its pen.

At one point, she even grabs the animal’s neck in a bid to thwart its feathery onslaught as her friend films the bizarre altercation.

The huge bird viciously bit, scratched and tried to kick Ms Waddington as she attempted to corner it into a pen on her sister’s farm in Helmshore, Lancashire. 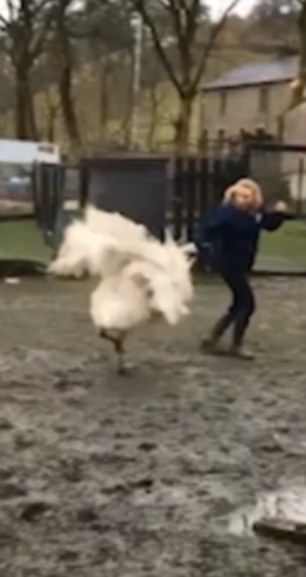 The furious bird charged at Heather Waddington while she was inside its pen in Helmshore, Lancashire 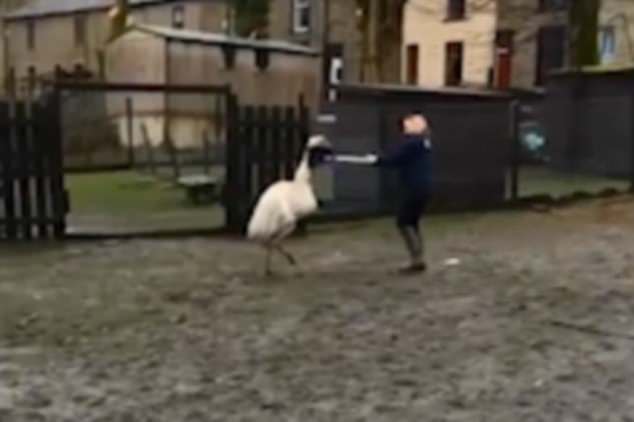 Heather, from Baxenden, Lancashire, said: ‘When I saw the bird coming after me, I s**t myself. I honestly thought I would be kicked.

‘It was running so fast and I had to get away from it. There was no way I was giving up.

‘I had to get it behind the gate. It would have kept going and going at me.’

Heather eventually sought refuge in another pen, swapping the shovel for hay to distract the bird as she tried to rejoin her sister on the other side of the yard. 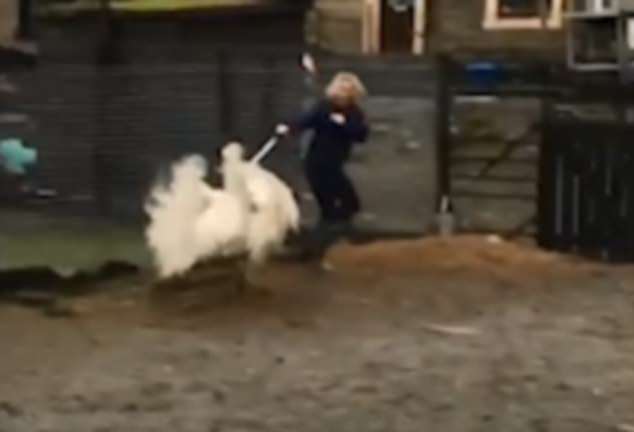 The huge bird viciously bit, scratched and tried to kick Ms Waddington as she attempted to corner it into a pen You’re in rhea-lly big trouble! The gigantic bird squares up to the mother as she fights it off with the shovel

But the bird rushed to attack again, with Heather only just making it out the gate in time to stop the rhea coming through after her.

Heather’s sister Jackie Johnstone and friend Lauren Cheetham laughed at the hilarious battle as they captured Heather’s attack on camera.

The trio had crossed the yard to see to a sick goat on the other side when the battle with the rhea began.

Heather said: ‘My brother-in-law is 6’6 and absolutely enormous, and gets attacked every single day. 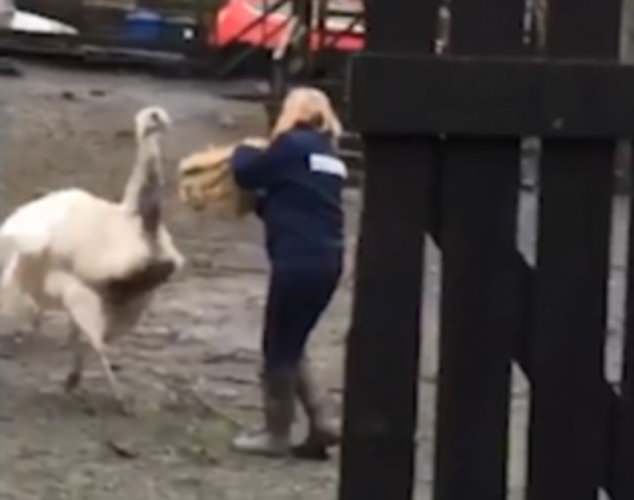 ‘I was a bit weak because I was at the tail end of flu so it was a bit of a challenge to get through. It took my breath away.

‘I didn’t think it was funny at the time, but I laughed my head off when I saw the video. It’s absolutely hilarious.’

The giant flightless bird, which originates from South America, has six-inch claws and could kill with a single blow.

They have three toes on each foot instead of four, which is believed to help them run faster.

Farmers in their native South America consider the gigantic birds pests because tey eat their crops.

The animals have a distinctive cry, which sounds more like a big cat’s road than a bird call.

Rhease are farmed for their meat, which is low in cholesterol, and are polygamous, which means the males incubate up to 60 eggs – laid by as many as 12 mates – in a single nest.

The female rhea lives on Jackie’s farm in Helmshore with a male companion, and is often visited by curious spectators at the weekend.

But the vicious attack is thought to have been prompted by a seasonal aggression to protect her egg.

Heather, who is a dog walker, said: ‘It’s spring time and the rhea is aggressive until she lays her egg because she sees you as a threat.

‘They’re never friendly this time of year. You just have to go in and hope for the best.

‘If you can out a bit of food down for it then the job is a lot easier – then we can coax it into a pen and we can get into a pen without being attacked.

‘Sometimes it’s out of site so you can sneak through, but this time it decided to attack.’

But the fight did not deter Heather from returning a few days later to help Jackie clean the pair of rheas out again.

Heather said: ‘I’ve always been around animals because we lived on a farm from being little so I know what I’m doing with it.

‘They are unusual animals to see, especially in England, but I’m not really a rhea fan. I’ve had a lot of dealings with it.

‘A horse is definitely my favourite animal. I’d much rather stick with them.’