A desperate mother has issued an anxious warning to parents after her six-week-old baby’s cold landed her in hospital in a terrifying ordeal.

Beth Foster’s daughter Myah had the symptoms of a common cold, but as a responsible mother she kept a close eye on them.

A week ago they went to the doctor and Myah was prescribed eye drops.

But on Saturday, the young mother’s nightmare began when she noticed her baby’s breathing had become irregular and it transpired she has bronchiolitis. 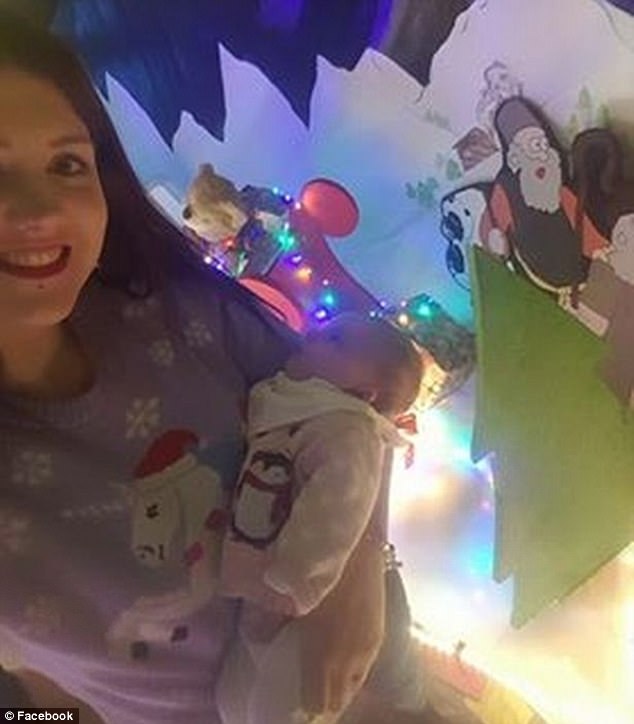 Beth Foster’s daughter Myah had the symptoms of a common cold, but as a responsible mother she kept a close eye on them

Beth, 21, from Stourbridge in the West Midlands, posted a gut-wrenching photo of her baby girl on Facebook along with a strong message to other parents.

It read: ‘Parents with babies or small children.

‘Please be aware of bronchiolitis this winter, it’s so easily missed and so bloody dangerous.

‘It starts with just a simple cough and cold and can turn to so much more within hours.’

The mother went on to describe how Myah was struggling to breathe which meant her stomach muscles were contracting at a worrying rate to help get air around her body.

Beth added: ‘I’ve never seen a baby’s tummy pumping so fast fighting for the breaths, and I’ve never been so scared. 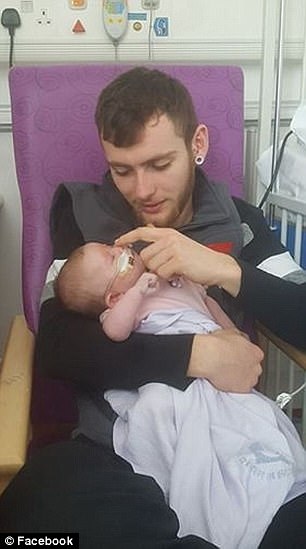 Harry Allport with Myah in hospital

‘I took her to the doctor on Tuesday and he prescribed some eye drops for a gunky eye. At that point she wasn’t struggling.

‘On Saturday whilst at a Christmas party she had a coughing fit and her face turned purple for around 15 seconds.

‘I phoned 111 who got us an out of hours appointment in which the doctor sent us straight to the hospital.

‘When I arrived they checked Myah’s sats and three nurses ran off with her to immediately get her straight on oxygen.

‘I was told they’re surprised she didn’t end up in an ambulance.

‘We had no clue how serious this all was until that point.’

The 21-year-old mother posted the powerful yesterday, which happened to coincide with Myah being six weeks old.

They are looking at anything between three and seven days in the hospital’s high dependency unit as the baby girl recovers.

Myah is hooked up to oxygen through a number of tubes and nurses are having to sedate the child for her to get some sleep.

‘There is nothing more heartbreaking,’ Beth wrote.

‘Even if your baby has a slight cough or cold, just get checked out.

‘Please spread awareness as before all this we didn’t even know what bronchiolitis was.’

Bronchiolitis: The symptoms to look out for, the steps to take and how common it is among young babies

Most cases are mild and clear up without the need for treatment within two to three weeks, although some children have severe symptoms and need hospital treatment.

The early symptoms of bronchiolitis are similar to those of a common cold, such as a runny nose and cough.

Bronchiolitis is caused by a virus known as the respiratory syncytial virus (RSV), which is spread through tiny droplets of liquid from the coughs or sneezes of someone who’s infected.

The infection causes the smallest airways in the lungs to become infected and inflamed which reduces the amount of air entering the lungs, making it difficult to breathe.

Around one in three children in the UK will develop bronchiolitis during their first year of life.

Bronchiolitis is most widespread during the winter – from November to March.

It’s possible to get bronchiolitis more than once during the same season.

There’s no medication to kill the virus that causes bronchiolitis, but the infection usually clears up within two weeks without the need for treatment.

About two to three percent of babies who develop bronchiolitis during the first year of life will need to be admitted to hospital because they develop more serious symptoms, such as breathing difficulties.

Most cases of bronchiolitis aren’t serious, but you should contact your GP if: