Mother-of-two, 35, ‘was pretending to be a racing driver’ moments before she lost control of her van and smashed into a house killing the 90-year-old homeowner inside, court hears

Tragic Joan Woodier (pictured) died as she made an evening telephone call to her son, a routine she stuck to after watching her favourite TV shows Coronation Street and Emmerdale

A mother-of-two was ‘pretending to be a racing driver’ seconds before she ploughed a van through the front wall of a house killing the 90-year-old homeowner, a court heard.

Tracy Bibby, 35, allegedly slammed into Joan Woodier’s house in Clevedon, Somerset, at around 35 miles-an-hour causing the front wall to collapse and bury her in rubble.

Tragic Joan died as she made an evening telephone call to her son, a routine she stuck to after watching her favourite TV shows Coronation Street and Emmerdale.

Bibby claims her then-boyfriend Ben Chappell was behind the wheel when the van crashed, but he claims she was driving.

Hannah Squire, prosecuting, said the crown intended to prove Bibby was driving at the time of the crash in Clevedon on April 18, 2018.

Members of Mrs Woodier’s family fought back tears as they listened to the prosecution opening at Bristol Crown Court on Tuesday.

Ms Squire described how Joan would watch Coronation Street and Emmerdale in the evenings before calling her son for a chat.

The court heard she was on the ‘phone to her son when the van smashed through her front wall, destroyed her house and left her dead in the rubble. 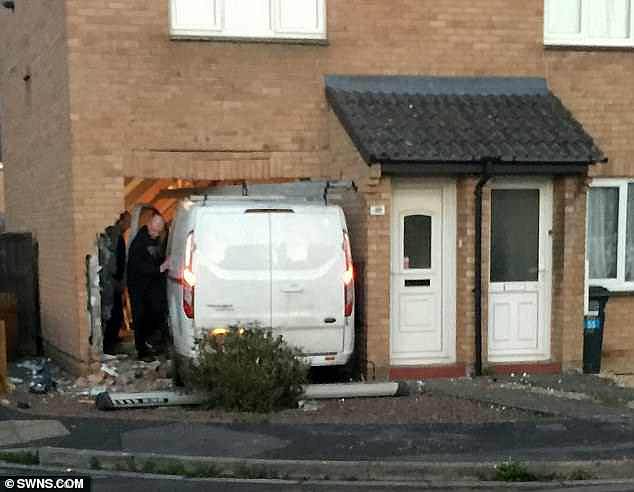 Tracy Bibby, 35, allegedly slammed into Joan Woodier’s house in Clevedon, Somerset, at around 35 miles-an-hour, the court was told. Pictured: The van inside the house

Ms Squire said: ‘The front wall, window and lintel supporting the upper story were all destroyed in the collision.

‘Masonry and debris was strewn throughout the front of the property. Joan Woodier was in the front room. She was killed by the falling masonry.’

Bibby and boyfriend Ben Chappell were on their way home from a nearby pub in his van when it crashed into Joan’s house, on Yeomeads Drive in Clevedon.

Ms Squire said: ‘Bibby was disqualified from driving in 2016 for three years.

‘At the time of the collision her disqualification was still current. She was, at the point of that collision, driving whilst disqualified. 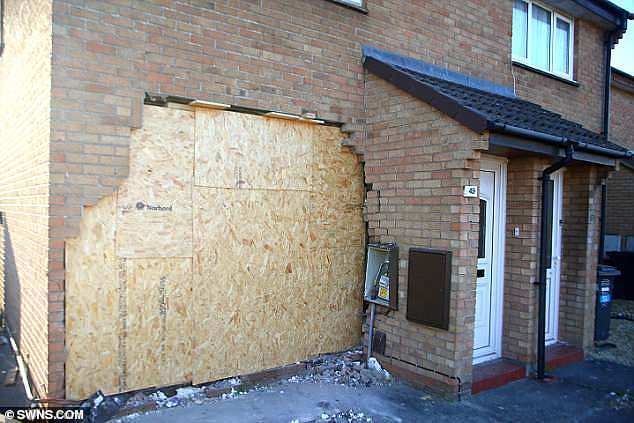 ‘She and her partner were breathalysed at the scene and were found to be under the limit.’

The court heard Bibby had been ‘showing off’ and ‘pretending to be a racing driver’ when she lost control and smashed into Joan’s house.

Ms Squire added: ‘She was driving like a racing car driver warming the tyres of the car.

‘She was moving the steering wheel from side to side – driving out of control in a vehicle she wasn’t very used to, having been disqualified for a couple of years.

‘The van then shot forward, at right angles to the road, into the house.’

The court was shown CCTV footage which the prosecution claims shows Bibby getting into the driver’s seat.

She claims that she and Ben swapped places before they drove away from the pub.

He is due to take the witness stand to give evidence.