Few people would willingly work through their cancer treatment but mother-of-five Kelly Warren never took a break from running the charity BK 2 Basics, which gives food and household supplies to families in need.

In June last year the 48-year-old was diagnosed with cervical cancer and underwent treatment but never considered stepping aside from running the Melbourne-based charity.

‘I did it right through treatment – I didn’t have a day off,’ she said.

Despite her selfless approach, there were some personal needs that had to be met, and the New Zealand-born woman’s friend set up a Go Fund Me page to help her family pay for parking, petrol and medication while she underwent 56 days of treatment.

As she awaits an update on May on the progress of her treatment, she hasn’t slowed down at all, gathering donations and building partnerships with groups such as OzHarvest and private companies such as Coles.

BK 2 Basics began a couple of years ago when Kelly and her family started assisting the homeless by creating dental packs, shaving packs, clothing and hygiene items.

When her daughter was eight she noticed children at school weren’t bringing lunch to school so they began making snack packs.

Then they progressed to families. 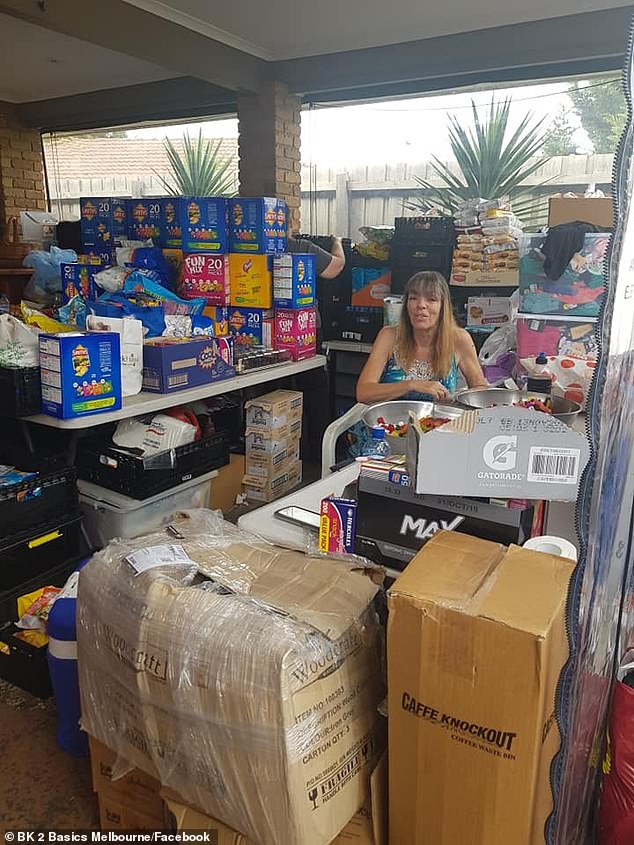 ‘It was all families. We don’t discriminate and we don’t judge,’ she told FEMAIL.

‘You don’t have to be on a benefit – things happen like insurance and car repairs.

Everyday the family and their volunteers offer food to the community in Melbourne’s outer southeast suburbs.

She said part of the appeal of BK 2 Basics was it offered food services without demanding identification like some other charities. 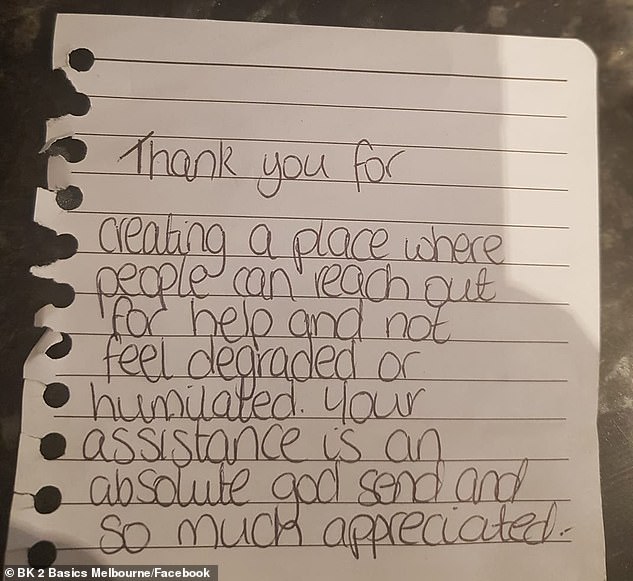 In a week they family-of-seven and their volunteers receive between 3,000 and 5,000 kilograms of food.

However she said it was never enough.

‘If I was to win Lotto or someone could give me a premises where we could hold more food – that would be amazing,’ she said.

‘We’re working from our home and it is very limited.’ 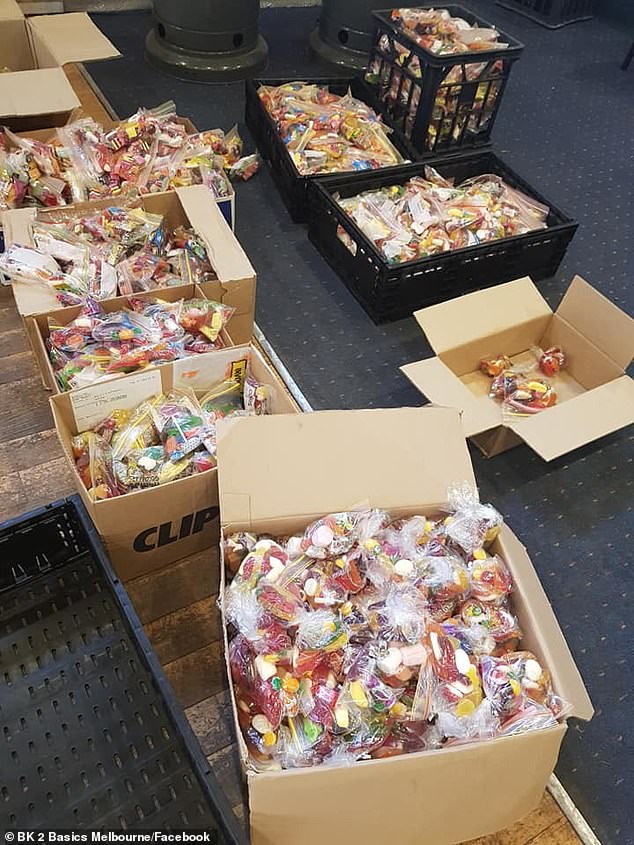 She has also organised a haircutting day later this month and was seeking donations to find a new place to hand out food.

They had also expanded their scope beyond the homeless. On Saturday, the charity took the stock they had for 1,000 Country Fire Association workers, before asking what they needed.

Within hours of putting a call out online the charity was gifted with 1,000 litres of milk, three pallets of Coca-Cola and two pallets of water.

‘Our motto is bringing communities together because you just don’t see it now,’ she said. 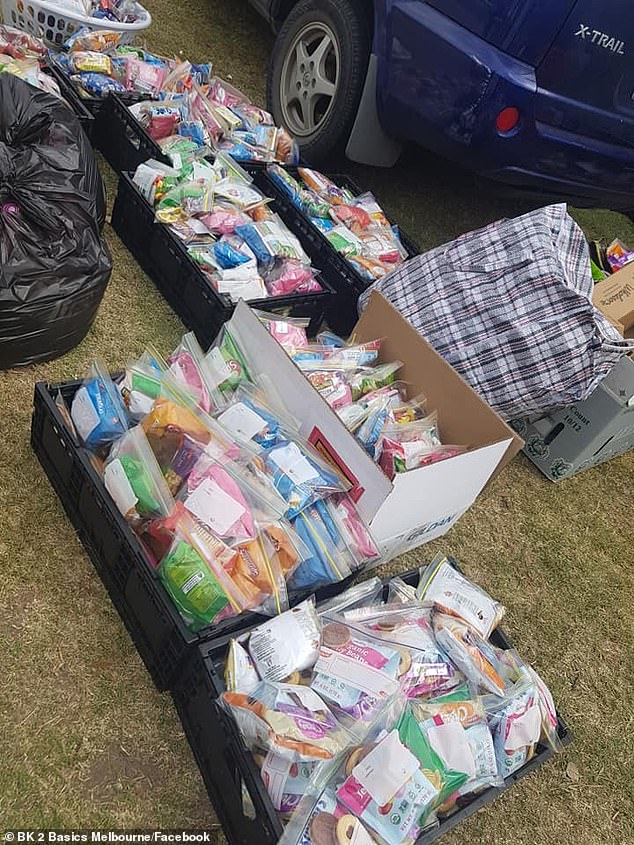 ‘And it is not just for crises – it is for domestic violence victims and their children or furnishing homes.

‘When the community does get together things happen very quickly. I just think community spirit is back.’

However the experience can occasionally be tarnished, by greedy people grabbing items, people getting aggressive with volunteers, and witnessing some of the heartache among those living on the margins.

‘Seeing some stuff we’ve seen in the last 18 months is terrible. You see a domestic violence victim and you can’t even …..

‘It’s not very nice to see but it makes you want to do something and change people’s thinking.’ 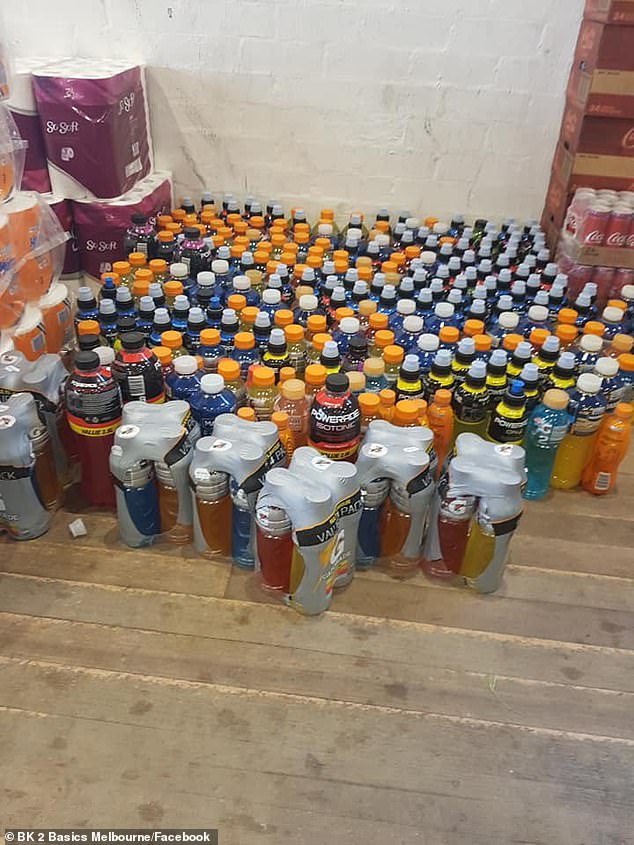 However between people being greedy at grabbing items, people getting aggressive with volunteers and witnessing heartache things can weigh on Kelly

She said it is important to remember the homeless population isn’t solely made up of drug addicts – she knows of former lawyers and accountants who live on the street through no fault of their own.

‘You’ve got to deal with the bad but you do get a lot of good as well,’ she said.

You can find more out about BK 2 Basics here with further information about their haircut day on March 24 and their plans to move locations to be able to provide further help.