A mother-of-four has turned her placenta into a smoothie – feeding it to her husband and their three-year-old son for the health benefits.

Jay always dreamed of repurposing her placenta but missed her opportunity with her first two births, but found a solution in time for her two most recent deliveries.

She paid £30 for her raw placenta to be turned into smoothies, and everything leftover was dehydrated and turned into pills – costing a further £150.

‘I don’t care, everyone is entitled to their opinion and it’s my body. I’m the one that looks into stuff and I make up my own mind about whatever I do. 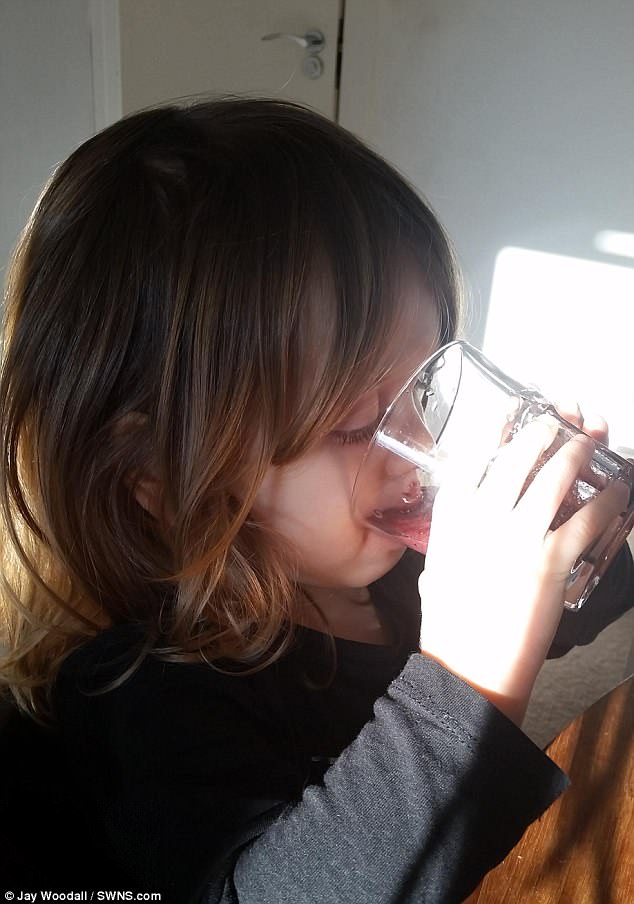 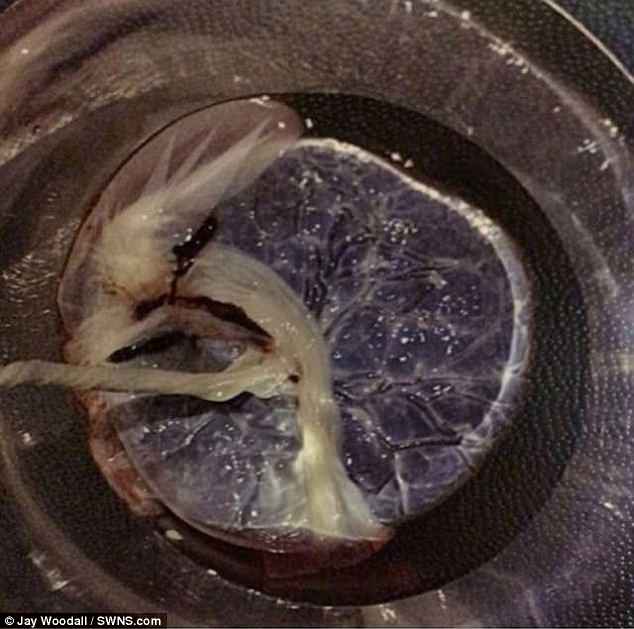 ‘I’m up for trying things out if it’s going to benefit my health and my body, or my children’s bodies.

‘It’s not really much different from eating certain meats. A lot of animals do it, especially mammals, we’re the only ones who don’t eat the after birth.’

Jay, a self-confessed hippy even had her umbilical chord dehydrated and turned into a keepsake ‘Love’ logo.

Speaking about the taste, Jay said: ‘It just tasted like a berry smoothie, It had coconut water and berries in it so tasted really nice. 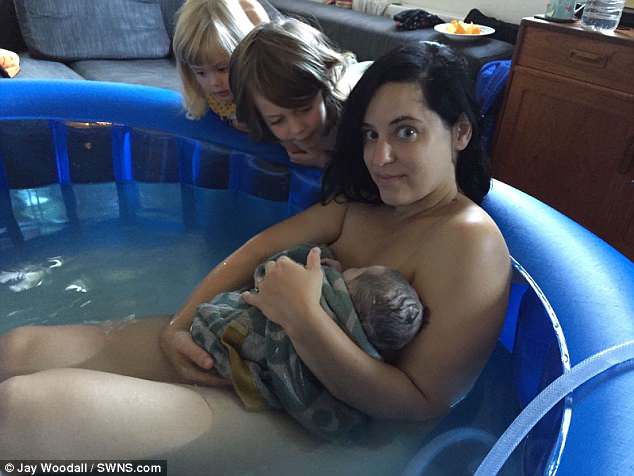 Jay missed the opportunity with her first two births, but found a solution in time for her two most recent deliveries. Pictured after Storm’s birth 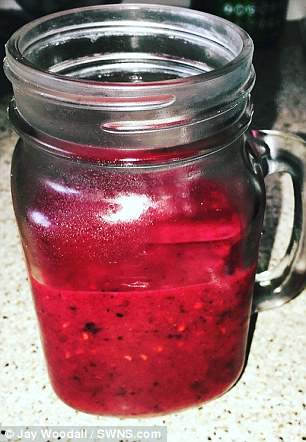 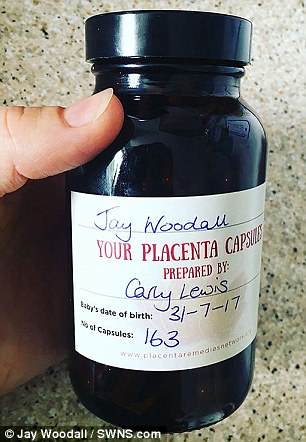 ‘I had a boost of energy, better deeper sleep, and my mood was boosted – I felt really good.

‘Milk production was good too, I had to take less because I was producing too much milk. The recovery after birth was quicker as well.

‘I did have a little taste of it on its own before and it just tastes a bit like liver, an irony, metallic taste. It’s not horrible, it’s not a disgusting taste at all.’

Jay even fed the placenta smoothie to her husband and son, Demitrius.

She said: ‘I think everyone had it. My husband had some just out of pure curiosity and my son tried some and said it was yummy. But again it had berries and stuff in it.

‘With my mum I gave her half of my tablets when I gave birth to Storm because she was suffering from a few hormonal issues. 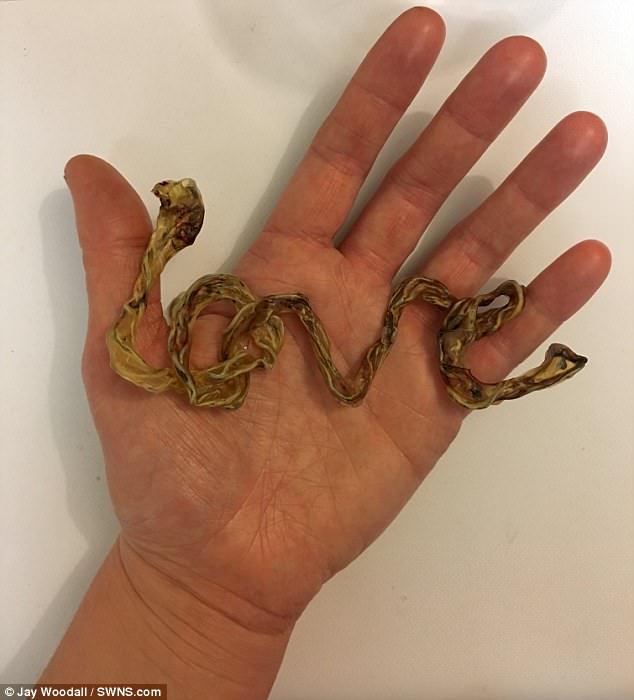 Jay, a self-confessed hippy even had her umbilical chord dehydrated and turned into a keepsake ‘Love’ logo

‘It was a similar response, she said it tasted nice and their energy levels increased. Mum said it made her feel very alert and very connected.

‘She said it made her feel loads better and gave her a lot of energy. And I thought hormonally it made me feel a lot better too.’

Jay says that her placenta also helped to improve her emotional state post-birth.

She continued: ‘It’s a highly beneficial thing to do, I know mothers that have suffered from post natal depression and I think it would help that, in my opinion.

‘I’m quite an emotional person anyway, and it felt like my hormones were nicely balanced after I had it.

‘When you think how much some people spend on vitamins, it sounds like a lot but if it lasts you a whole year then it’s good value for money.

‘After I had the placenta smoothie, with both girls, I was able to go out that same day after giving birth.

‘A really calming feeling came over me. I had a boost of energy and just felt really good about myself. It was really lovely to experience feeling that.

‘It’s one of those things that you can be sceptical about it, but in my eyes there’s nothing negative that could happen from it.

‘I was a bit more connected and bonded to my baby, I was able to have a very deep sleep after having it, so it just outweighs the negatives.’

Why do mothers eat their placenta and which celebrities have tried it?

Placenta is the organ from which the mother connects to the baby to provide nutrition in the womb.

It protects the baby at the end of pregnancy and has been feted in ancient medicine for its qualities.

Key nutrients included in the placenta include stem cells and growth factors, iron, and Vitamins B6.

Kim and Kourtney Kardashian are among the high profile celebrities who have led the trend in eating their own placentas.

Meanwhile, Mad Men actress January Jones credits placenta pills for giving her energy after the birth of her son Xander Dane in 2011.

Alicia Silverstone, best known for her role in Clueless, took placenta capsules after having her son Bear Blue in 2011, calling them ‘happy pills’.

Ex-Atomic Kitten star Natasha Hamilton said taking placenta pills ‘was the best money I ever spent’ after having her fourth child.

Many new mothers believe that eating the placenta prevents postpartum depression and other post-pregnancy complications.