Mother-of-one, 21, vows to be her sister’s maid of honour after being diagnosed with cervical cancer

A young mother has shared a heartbreaking bucket list after being diagnosed with cervical cancer at just 19-years-old.

Abbie Colvin received the shock diagnosis more than two years ago, after a year of enduring symptoms including cystitis, bleeding after sex and lower back pain.

And now the aspiring doctor wants to grasp every possible moment life has to offer and has shared a bucket list of things she wants to do such as being her sister’s maid of honour and taking her son Oscar on holiday.

Her illness was picked up in a sexual health screening check and doctors told her she would need a hysterectomy.

Abbie Colvin (pictured) received the shock diagnosis more than two years ago, after a year of enduring symptoms including cystitis, bleeding after sex and lower back pain 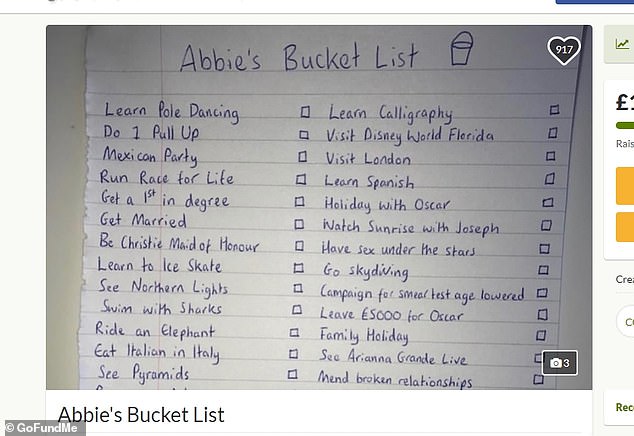 Miss Colvin’s bucket list has been shared on GoFundMe by her sister Christie. It includes getting married, being maid of honour at her wedding, riding an elephant and going skydiving

After coming to terms with the fact she may never have a baby, Miss Colvin from Poulton, Lancashire, went in for laser treatment to target cancer cells on her cervix in April 2017 – but a precautionary urine test revealed she was already pregnant.

Despite being offered chemotherapy during her pregnancy, Abbie wasn’t willing to take any risks as she knew this may be her only chance to carry her own baby.

The inspirational mother-of-one has continued pushing forward with her life ambitions even though her cancer has continued to spread.

Miss Colvin, still gets up everyday at 4am to go to work and is determined to harness her dream of becoming a doctor so continues to study at the university in Manchester. 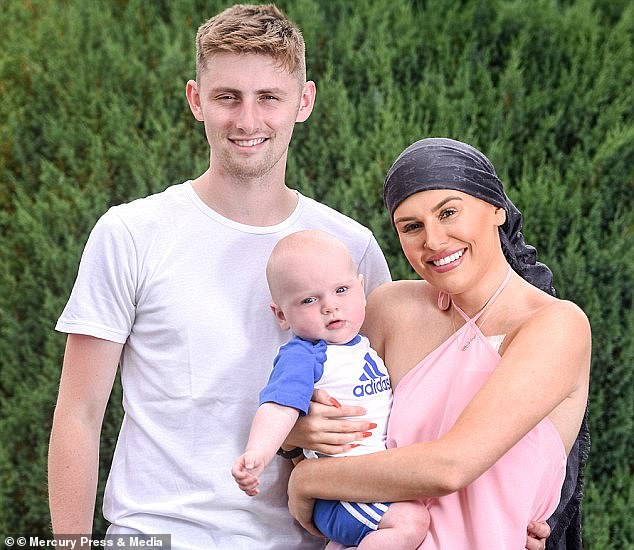 Her sister has set up a fundraising page to help Abbie achieve the various goals on her bucket list, which also include learning to skate, seeing the Northern Lights and campaign for the smear test age to be lowered.

Christie said: ‘ Her loved ones around her see her when she’s unable to even lift her head off her pillow because she’s so weak from the treatment, her bald head because she’s lost all of her hair.

‘But no one would ever know as she holds her head high and has the happiest spirit you could ever imagine.

· Cervical cancer is when abnormal cells in the lining of the cervix grow in an uncontrolled way.

· The main symptom is unusual bleeding from the vagina.

· Around 3,200 women are diagnosed with cervical cancer in the UK each year. That’s around 9 cases diagnosed every day.

· Finding changes in the cells through screening can help to prevent cancer developing.

· Cervical cancer is more common in younger women. More than half of the cervical cancer cases in the UK each year are diagnosed in women under the age of 45.

· Treatment depends on where in the cervix the cancer is, how big it is, whether it has spread anywhere else in the body and general health. Usually surgery is needed or a combination of chemotherapy and radiotherapy (chemoradiotherapy).

· A colposcopy is a simple procedure used to look at the cervix, the lower part of the womb at the top of the vagina. It’s often done if cervical screening finds abnormal cells in your cervix.

‘She never lets anyone around her feel down and sad and that’s exactly why she keeps such a brave face and powers on as if nothings even going on in her life. She keeps fighting for her little miracle baby and I genuinely believe thats what has kept her going.

‘She is such an inspiration to everyone around her.

‘She has posted her “Bucket List” of things she wants to do as life is too short and has been told she might not see another Christmas if things keep going the way they are going.

‘She wants to make memories, with all her favourite people in the whole wide world. And take her baby places whilst she’s still here and can.’

Other things on her bucket list include learning to ice skate, riding an elephant, eat Italian in Italy, seeing the pyramids, go on a family holiday, see Ariana Grande live and mend broken relationships.

In an interview with Femail in July 2018 Miss Colvin urged young women to never give up in their battle against cervical cancer.

She said: ‘For other women battling cervical cancer, you can never give up. You know your own body and you need to keep pushing for a diagnosis.

‘If you know something isn’t right, you need to stick at it because they actually refuse to give women under 25 a smear test.

‘It’s really nice to be able to share my story and get it out there for other women, especially people who are too young for a smear.

‘It’s scary. If I hadn’t kept going to the doctors and gone for sexual health screening, I still wouldn’t know I had cancer. That one test saved my life.

‘Women need to know that even if they’re not eligible for a smear test, there are other ways of getting a diagnosis.’