Mother-of-one, 35, died from cancer after doctors failed to diagnose disease

Dee Coldbeck died from a rare bile duct cancer, which was initially diagnosed as a variety of other ailments

A ‘beautiful’ mother-of-one died from cancer after 12 visits to a GP surgery in nine months having told her husband: ‘I know something is wrong. No-one is listening’.

Dee Coldbeck’s rare bile duct cancer was diagnosed as stress and anaemia before she passed away on March 1 this year aged just 35.

Mrs Coldbeck became so convinced she was seriously ill she started keeping ‘Dee’s medical diary’ as evidence doctors at Plains View Surgery in Mapperley, Nottingham, had missed a serious illness.

At the time she told her husband Mark: ‘I know my own body. I know there is something wrong’.

By the time specialists at Nottingham’s Queen’s Medical Centre finally diagnosed cancer in the bile ducts leading to her liver it was terminal and she died two months later.

The city’s Coroner’s Court heard had she received chemotherapy sooner it was ‘possible’ she would have lived longer, but the surgery had failed to act in accordance with guidelines.

But a partner from Plains View told the coroner yesterday: ‘She did receive appropriate care’.

Mrs Coldbeck, who had one son, three-year-old son Ellis, started suffering chronic pains in April 2018 and made the first of her numerous visits to her local GPs in Mapperley, Nottingham. 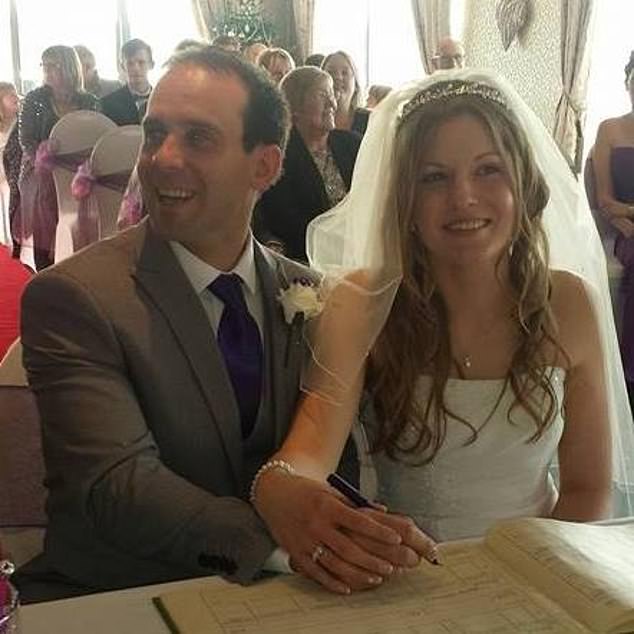 Mrs Coldbeck, from Nottingham, told her husband Mark (pictured together on their wedding day): ‘I know my own body. I know there is something wrong’

The coroner Laurinda Bower read extracts from ‘Dee’s medical diary,’ which covered hospital visits as well as trips to the Plains View Surgery.

Cancer of the bile duct, known as cholangiocarcinoma, is a rare type of cancer that mainly affects adults aged over 65.

Bile ducts are small tubes that connect the liver and small intestine.

They allow fluid called bile to flow from the liver, through the pancreas, to the gut, where it helps with digestion. Cancer can affect any part of these ducts.

Bile duct cancer can sometimes be cured if caught very early on, but it’s not usually picked up until a later stage, when a cure isn’t possible.

An early entry referred to her complaining of pain in her right side. She was initially checked to see if she had gallstones. When this was ruled out, it was thought she might have damaged a muscle.

Dr Umar Amad, a partner in the medical practice, said that most of her appointments were with another doctor, who ordered blood tests and an ultrasound scan. These showed she was anaemic.

Dr Amad told the inquest: ‘There are lots of causes of anaemia. Liver tests were all normal.’

She was prescribed painkillers and iron tablets. Later stress was diagnosed, but she also had symptoms of breathlessness and feeling tired.

When problems continued, the practice ordered a full liver screening in October. In the next month, it was decided to send Mrs Coldbeck to a specialist, but the paperwork was delayed.

Asked by the coroner about improvements, Dr Amad replied: ‘I think she did receive appropriate care. I don’t think we would have changed that plan significantly.’

Her husband Mark told the inquest his wife became increasing worried that she was not being taken seriously.

He told Nottinghamshire’s assistant coroner Laurinda Bower ‘She said ‘No one is listening”. Dee had the frustration of that. It is the type of cancer rarely diagnosed and we didn’t get the result we wanted.

‘We are not here seeking legal representation, but we want to make sure there are lessons learnt and things will improve.’

In January this year the Tesco worker was diagnosed with Metastatic Bile duct cancer. By that time she had developed deep vein thrombosis which delayed samples being taken from her liver. 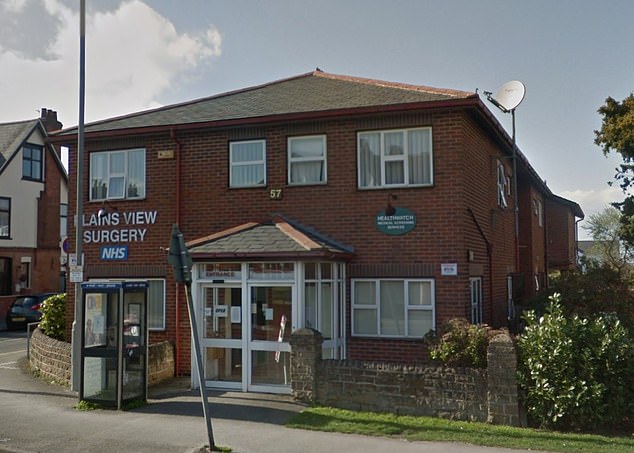 Mrs Coldbeck made 12 visits in nine months to Plains View Surgery in Mapperley, Nottingham (pictured), whose GPs insists she had the appropriate care

Specialist Dr Ankit Rao treated her at the Queen’s Medical Centre and the City Hospital in Nottingham.

He described the cancer as rare and difficult to cure unless it is spotted early. She had an aggressive form of it.

The coroner asked: ‘If you had started chemotherapy sooner, would Dee have lived longer?’

He told her: ‘Possible to probable, possible is more reasonable.’

The young mother passed away at the City Hospital on March 1 this year leaving behind her husband and three-year-old son Ellis.

The coroner gave a narrative conclusion and said the surgery took five days to send the case to a specialist, when the guidance suggests 24 hours.

And she said the practice had failed to carry out ‘a robust investigation’ into the case and is to write about this to the Care Quality Commission, which monitors GP practices.

After the inquest, Dee’s father Peter, 70, said: ‘She was a great believer in social justice. She did not like to see people unfairly treated.

‘She was beautiful and much loved. She was too brave for her own good.’

Husband Mark said she took part in the cancer charity Race for Life, through her work at Tesco and enjoyed raising money doing 10k runs.

On a fundraising page Mark described his wife as ‘incredibly beautiful, strong, funny woman who was loved unconditionally’.

He added: ‘Dee loved so many things in life including art and craft, the outdoors, her family, friends and had everything to live for. We still can’t believe this has happened and so quickly.’