A mother of a teenage organ donor met the man given her son’s liver for the first time at the finish line of a walking challenge.

Karen Glean was waiting at the end of the London to Brighton 100k Challenge to congratulate Steve Dunster and say hello face-to-face.

The 50-year-old feared it may be awkward finally meeting Mr Dunster – even though they had exchanged emails for many months.

But when she embraced the electrical engineer she ‘got a sense of Ben’, her 18-year-old who died in December 2017 from a cardiac arrest.

Discussing the moment she met Mr Dunster, who needed a new liver after being given a cancer diagnosis, Ms Glean said it was ‘surreal’. 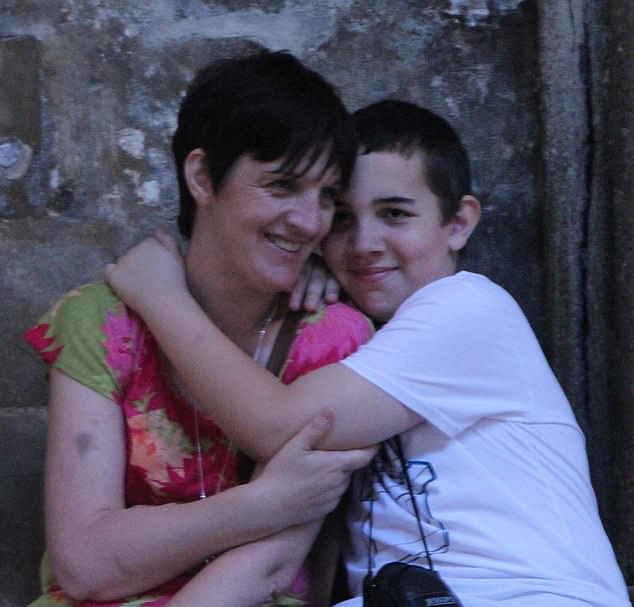 The 50-year-old feared it may be awkward finally meeting Mr Dunster – even though they had exchanged emails for many months (pictured with her son Ben, who died in December 2017)

Ms Glean, who lives in Cardiff, added: ‘We went for coffee and I bought a bottle of champagne and we had a toast to Ben.

‘The most moving moment for me was when I hugged him and I’d thought it might be uncomfortable because I don’t really know him.

‘But it didn’t feel like he was a stranger. I got a sense of Ben, it felt comfortable and familiar in a way, which was surreal but really nice at the same time.’

Ms Glean had travelled down to the south coast with her older son Michael over the bank holiday weekend to congratulate 54-year-old Mr Dunster.

‘To me, he’s taking care of my son’s liver and using his second chance to improve the lives of others. Because of that Ben is still making a difference,’ she said.

‘As the walk got closer I started to feel a bit nervous, thinking would Steve be a nice person? Would he be the sort of person who Ben would like? 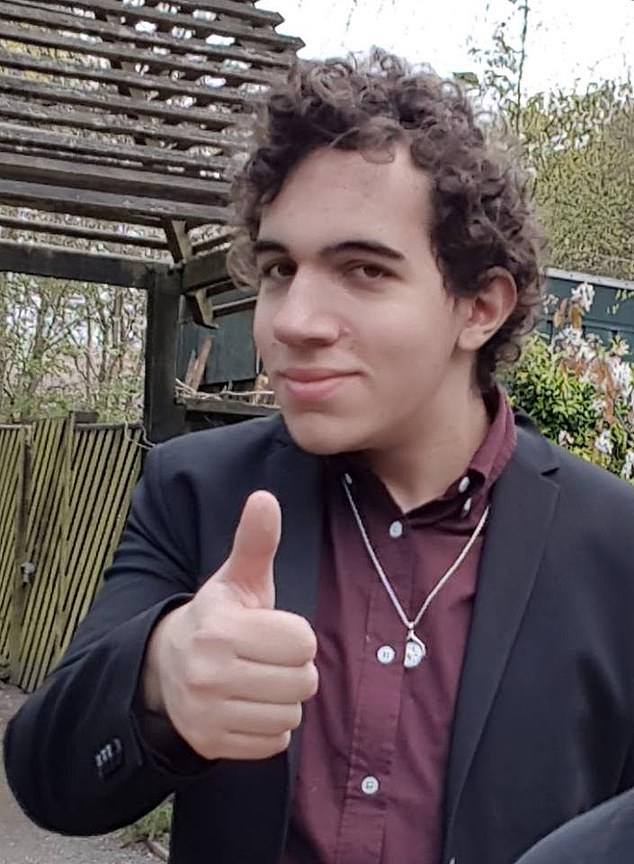 When Ben (pictured) died just three months after his 18th birthday, Ms Glean had no hesitation in making the decision to donate his organs 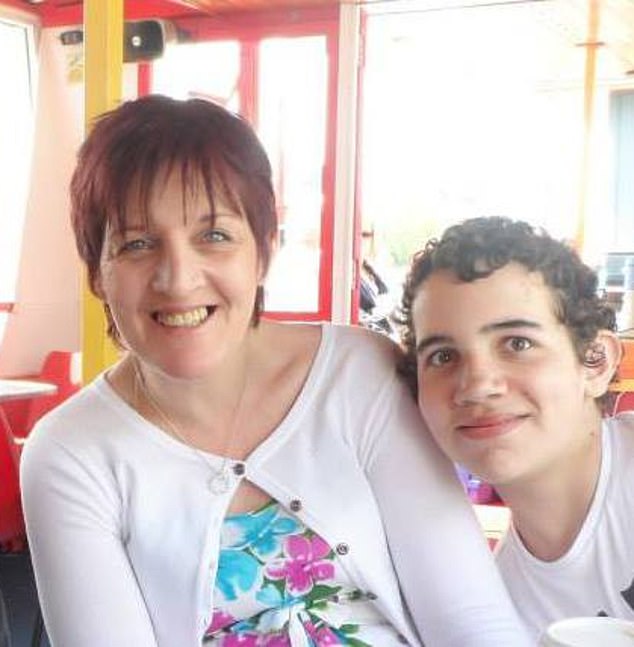 IS ENGLAND GOING TO HAVE OPT-OUT DONATIONS?

Opt-out organ donation will become law from 2020 after a Government bill was finally approved in March.

The Queen gave royal assent for the bill – also known as Max and Keira’s law after the donated heart of Keira Bell, nine, saved the life of Max Johnson, 10, in 2017.

This meant The Organ Donation Act’s changes to consent come into effect next year.

Expected to save hundreds of lives every year, the change will mean all adults’ organs can be taken after they die unless they specifically tell the NHS otherwise.

Schoolboy Max Johnson said of the decision at the time: ‘Even if it saves just one life, it will be worth it.’

‘All of a sudden, I was finally going to get to meet this man, knowing that inside his body is a piece of my son.’

She added it was a ‘proud moment’ to know her son is responsible for Mr Dunster, a father-of-two, still being alive.

‘As his mum, it doesn’t feel as though he’s gone just because his body’s not here anymore,’ Ms Glean said.

‘He’s still part of my life, he’s still my son, his humour’s still here and he still influences my decisions in the same way he did when he was alive.

‘For me it’s quite a lonely existence without him but to meet Steve, and know that the reason he was there was because of Ben, was amazing.’

When Ben died just three months after his 18th birthday, Ms Glean had no hesitation in making the decision to donate his organs.

He passed away in the intensive care of Grimsby’s Diana Princess of Wales Hospital, following the cardiac arrest triggered by his undiagnosed type 1 diabetes.

It was something the pair had spoken about and which the teenager, who dreamed of becoming a police officer, strongly believed in.

‘Ben is the youngest of my two sons and had a character that could light up a room,’ Ms Glean said.

‘He was studying for his A levels at the time of his death and had passed the first stage to become a Special Constable.

‘His dream was to become a police officer for our local force where he wanted to make a difference to the area and promote equality for all.’

Ms Glean said she knew that Ben would have wished for his organs to be donated to people in need. 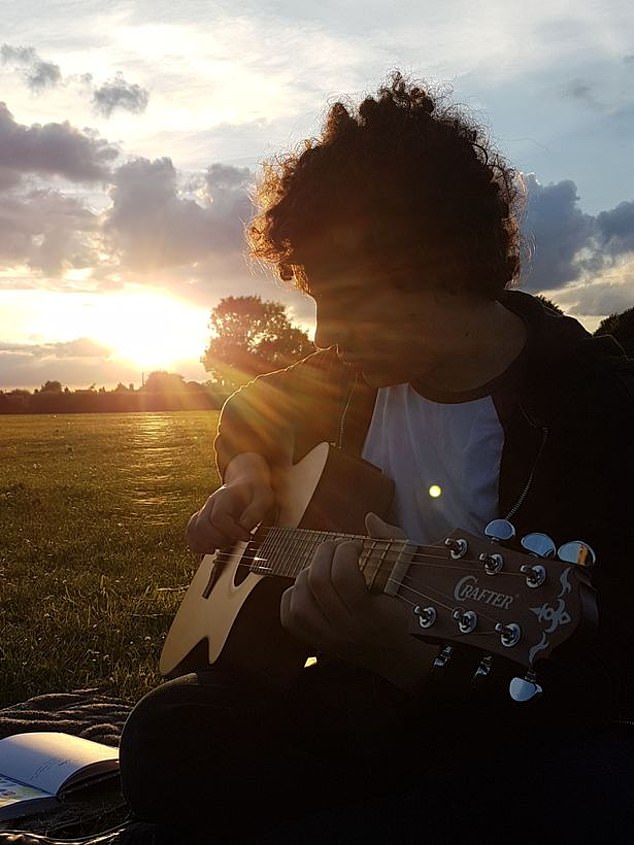 Straight after Ben’s funeral on December 28, Ms Glean spoke to his transplant team and asked if she could write to the patients who received his organs (Ben is pictured playing a guitar) 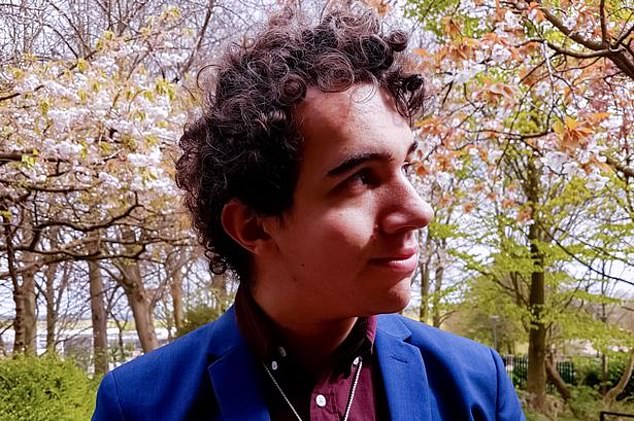 ‘It was three weeks before Christmas and I just thought, nothing that can be done for Ben now,’ she added.

‘But just by saying one word I can make another family’s situation better. I could give them the miracle we couldn’t have.’

Ms Glean later discovered Ben’s kidneys had gone to two people in their 30s and his corneas gave sight back to two more people.

Mr Dunster was diagnosed with liver cancer and told he needed a transplant just eight days before Ben’s death. He received Ben’s liver.

Straight after Ben’s funeral on December 28, Ms Glean spoke to his transplant team and asked if she could write to the patients who received his organs.

WHAT IS A CARDIAC ARREST?

A cardiac arrest occurs when the heart suddenly stops pumping blood around the body, which is usually due to a problem with electrical signals in the organ.

This causes the brain to be starved of oxygen, which results in sufferers not breathing and losing consciousness.

Cardiac arrests are different to heart attacks, with the latter occurring when blood supply to the heart muscle is cut off due to a clot in one of the coronary arteries.

Drug overdose and losing a large amount of blood can also be to blame.

Giving an electric shock through the chest wall via a defibrillator can start the heart again.

In the meantime, CPR can keep oxygen circulating around the body.

‘I told them Ben would have died anyway, I’d rather he died and helped someone, and I thanked them for taking a piece of him and looking after it,’ she said.

When Mr Dunster wrote back, the two found an instant connection and parallels with their family lives. Transplant recipients ‘may wish to write a letter of thanks to their donor family once they personally feel ready to do so post-transplant’, the NHS states.

‘We didn’t talk about the donation much, or even about Ben,’ she said.

‘We just talked about everyday life really and it was such an inspiration for me to get to know him.’

Mr Dunster who has been campaigning to raise awareness of organ donation, said discovering his donor was so young was surprising.

‘It probably hit me harder than I care to admit, to find out he had all his life in front of him did come as a shock,’ he said.

‘But even though that first letter from Karen didn’t go into details, it gave enough that I felt comforted.’

Mr Dunster added: ‘Now I do feel that I am “looking after” the liver that I was so fortunate to receive.’

Ms Glean said Mr Dunster’s charity work has helped her to cope since Ben’s death because it feels as though his drive is still there.

‘And I’m more driven because it’s as if Ben is behind me going “go on mum” every time I tell his story or do anything to highlight the things he cared about,’ she said.