The husband of a pregnant woman who died suddenly from a rare brain condition has revealed how she used her final moments to save their unborn baby.

Charlotte de Martino, 31, had been enjoying life with husband Michael, 32, and their daughters, Freja, three, and Astrid, one.

The Swedish-born IKEA worker, who lived in Ferntree Gully, Melbourne, and was six months pregnant with her third child, was home alone one Saturday morning when she suffered a catastrophic brain bleed caused by an arteriovenous malformation.

Before slipping unconscious, Charlotte mustered the strength to call an ambulance,  an extraordinary act that doctors say is the only reason they could save their daughter, Runa.

A month to the day after agreeing to switch off her life support machine, Michael told Daily Mail Australia about his wife’s remarkable courage – and how their beloved girls have given him a reason to carry on.

Avid travellers, Charlotte and Michael met on international friendship website Interpal, which is used by people all over the world to make connections before jetting off on overseas adventure.

They hit it off instantly, Skyping for months before flying to South Korea to meet on a holiday in May 2014.

‘It was easily the best day of my life,’ Michael, an account manager at an electronic security firm, said.

‘We both just knew there and then. I could have asked her to marry me on the spot and she would have said yes.’

Although she had never planned to leave her native Karlstad, west central Sweden, Charlotte packed up her life and moved to Australia to be with her ‘soulmate’ three months later. 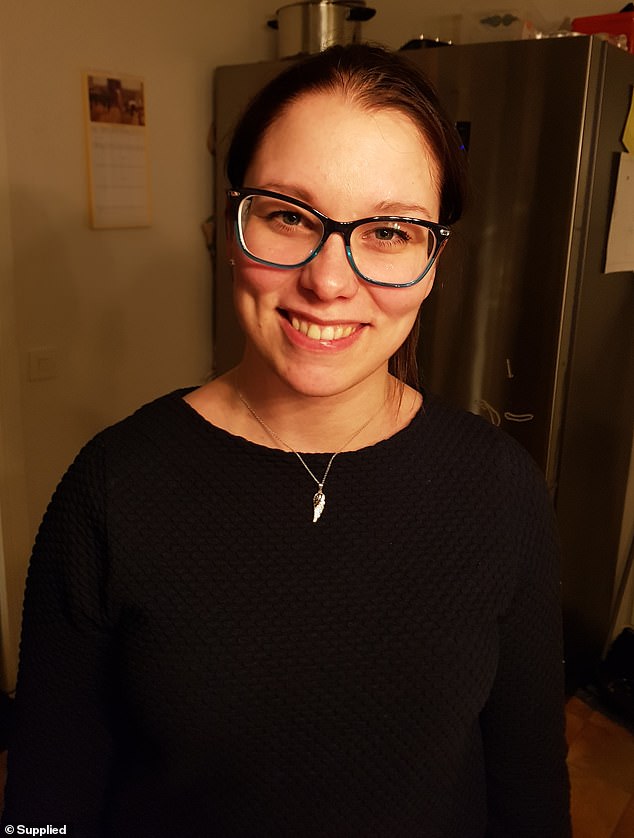 Before slipping unconscious, Charlotte (pictured) mustered the strength to call an ambulance, an extraordinary act that doctors say is the only reason they could save her daughter, Runa

The couple travelled the world together before buying a house in 2015 and tying the knot two years later, welcoming daughter Freja soon after.

The de Martinos enjoyed four years of wedded bliss, heightened by the arrival of Astrid in 2019, before their world came crashing down on March 6, 2021.

‘Saturdays were always “leave mum alone” days, so I was out with the girls and she was at home by herself,’ Michael said.

They spoke on the phone that morning but hours later, Charlotte was unresponsive in an ICU bed with doctors clueless about what had happened to her.

Tests revealed she had experienced a massive haemorrhage triggered by an aneurysm, a sudden swelling which had caused an abnormal tangle of blood vessels known as an arteriovenous malformation (AVM) to burst in her brain.

The condition is rare, affecting just one percent of the world’s population, and often without symptoms. 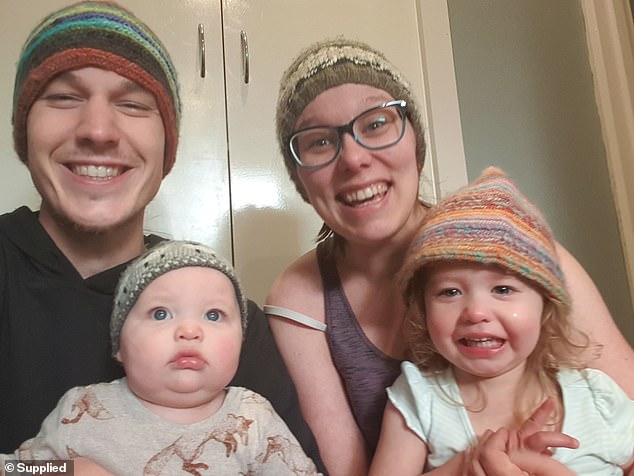 The de Martinos (pictured with Astrid, left, and Freja, right)  enjoyed four years of wedded bliss before their world came crashing down on March 6, 2021

She is still in intensive care where she will remain until she can eat and breathe independently. Michael visits her everyday.

After two weeks without brain activity, Michael made the agonising decision to turn off Charlotte’s life support on March 20.

ICU consultants say they are still baffled by how she managed to dial triple zero in her last moments of consciousness.

‘No one can really explain it because the doctors said it usually happens like a balloon bursting,’ he said.

‘It’s the only reason my daughter is alive.’

What is an arteriovenous malformation?

An arteriovenous malformation of the brain (AVM) is a tangle of abnormal blood vessels connecting arteries and veins in the brain.

The arteries are responsible for taking oxygen-rich blood from the heart to the brain.

Veins carry the oxygen-depleted blood back to the lungs and heart, and a brain AVM disrupts this vital process.

An arteriovenous malformation can develop anywhere in your body but occurs most often in the brain or spine.

Brain AVMs are rare and affect less than 1 percent of the population.

The cause of AVMs is not clear. Most people are born with them, but they can occasionally form later in life. They are rarely passed down among families genetically.

Some people with brain AVMs experience symptoms such as headache and seizures.

AVMs are commonly found after a brain scan for another health issue or after the blood vessels rupture and cause bleeding in the brain.

Once diagnosed, a brain AVM can often be treated successfully to prevent complications, such as brain damage or stroke.

The tragedy has been hardest on the de Martinos eldest daughter Freja, who is old enough to understand her mother has passed away but still struggles with the permanence of the fact.

‘It feels like I have to experience my wife passing everyday,’ said Michael.

‘She’s still under the impression that her mum’s in hospital and she might see her again. It’s heartbreaking having to tell her that that’s never going to happen.

‘If there was anything in the world I could do to change it for her, I would.’

Friends and family from around the world including countries such as Russia. Italy, Portugal and the UK, joined a livestream of Charlotte’s funeral on March 31 to remember her and show support for the young family she left behind.

A GoFundMe campaign launched by Michael’s mother Linda had raised $78,520 at the time of writing. 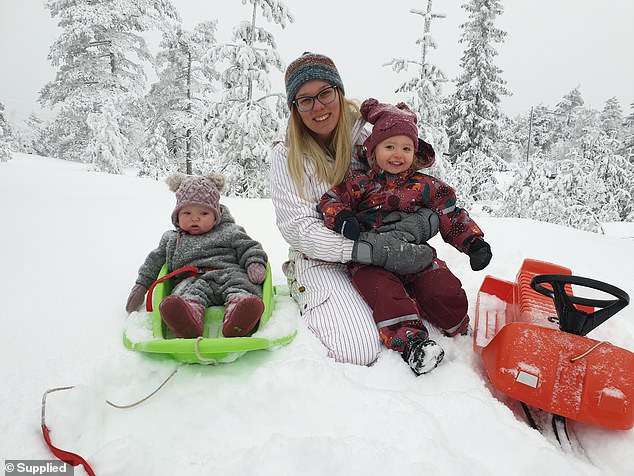 After two weeks without brain activity, Michael made the agonising decision to turn off Charlotte’s life support on March 20, 2021

Donations will be used to support Michael and his three little girls as they continue life without their mother, as well as funding flights for Charlotte’s parents who paid close to $20,000 to fly to Australia for their daughter’s funeral.

Despite Sweden being declared a Covid red zone with over 7,500 cases daily, Charlotte’s parents were granted entry to Australia on compassionate grounds thanks to the support of the Victorian and Adelaide state governments and Qatar Airways CEO, Akbar Al Baker.

‘There were so many people involved,’ Michael said.

‘It made me happy that in times like this, the compassionate side of things came through. But it was the definition of a hollow victory.’ 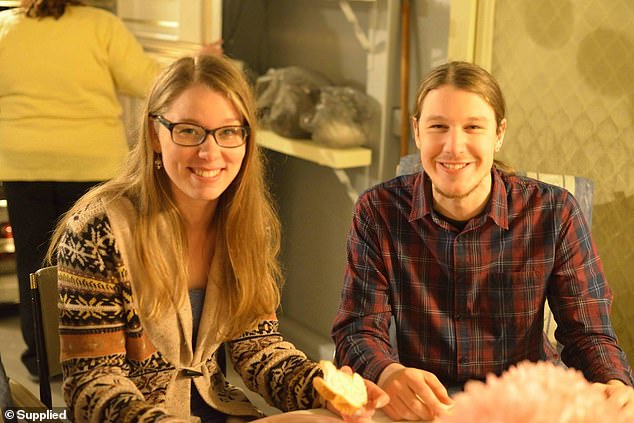 Michael now faces a future without his beloved partner, raising their children alone

Michael urges others to cherish time with loved ones, because ‘you never know when your time is going to be up’.

‘Right now I’m just trying to get through the day, waking up and getting to bed with everyone still in one piece,’ he said.

‘Even with how much it hurts now, and part of me died with Charlotte, I experienced seven years of euphoria and I know how lucky I am to have had that.

‘Charlotte passed knowing she was the best thing that ever happened to me, so I’d just say to people never leave anything to chance.

‘I don’t have any regrets because I always told her how much she meant to me.’