A devastated mother-of-three has been diagnosed with incurable stage four ovarian cancer – just after her teenage son got the all clear from his leukaemia.

Her illness followed a hauntingly similar path to her son’s – with them both becoming sick and having to cut short their holidays in Devon.

Both also had to go back and forth to the doctors, who repeatedly dismissed their concerns, before they were eventually diagnosed.

Ms Bourne believes the delay in receiving a diagnosis, which has cost her her life, is partly due to the lack of awareness around symptoms.

She endured severe bloating – a little known sign – that made her appear pregnant during her run-up to the heartbreaking news being broken.

Despite being initially told she had cancer, and undergoing grueling rounds of chemotherapy, it came back to haunt her – and doctors have said it’s incurable.

Speaking for the first time about her ordeal, Ms Bourne said: ‘It’s unbelievable how much the pattern repeated itself.

‘Telling Jaye I now had cancer, after he’d fought so hard to get well, was one of the worst things I’ve had to do.

‘He knew I’d been ill and I was mindful that he might Google my symptoms, so I had to tell him soon after my diagnosis. He’d only just gone back to school after a year out, happy and confident.

‘I sat him down and said, “Jaye, I’ve got some news. I’ve got cancer”. He didn’t believe me at first, but I promised we were all in it together.’

When did cancer first strike the family?

Cancer first struck the family in 2013, when Jaye became too exhausted to compete in the sports he once loved, and developed lingering coughs and back pain.

Concerned, Ms Bourne – who also has twin girls, Eve and Grace, nine, with her business owner partner Richard Camacho, 43 – took him to the doctor.

But they dismissed her concerns and said he was just run down.

By December, when the family were planning to spend their Christmas in Devon, his symptoms had escalated. 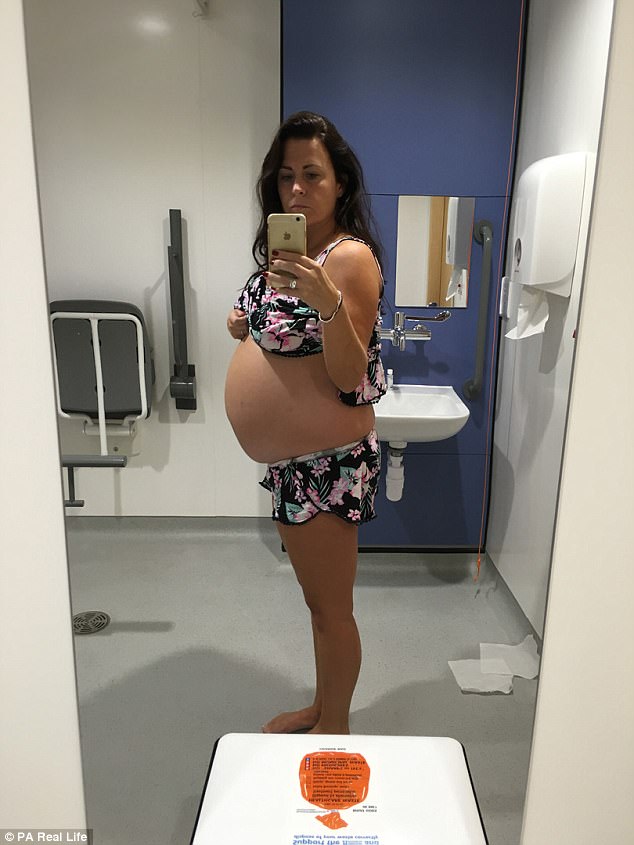 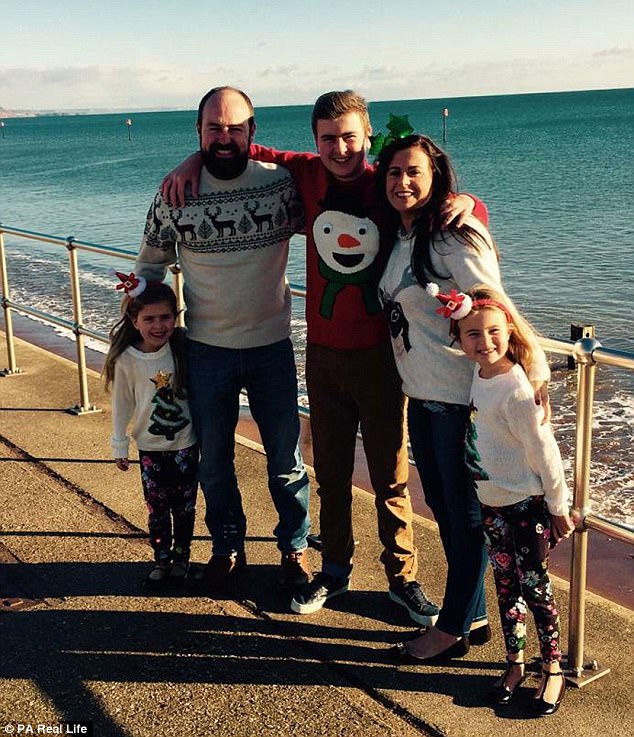 Her illness followed a hauntingly similar path to her son’s – with them both becoming sick and having to cut short their holidays in Devon (also pictured with her twin girls, Eve and Grace, nine, and her business owner partner Richard Camacho, 43)

They returned to the doctor, who suggested he might have glandular fever, so the family thought it was fine for them to go away as planned.

Ms Bourne added: ‘Over the Christmas period, Jaye got worse and worse. He didn’t even open his presents or eat Christmas dinner.

‘I said to Richard we needed to get him to a doctor, so we packed the car up and drove to Good Hope Hospital in Sutton Coldfield, near Birmingham.’

At A&E, Jaye was given a blood test and, just a few hours later, told he had acute lymphoblastic leukaemia, a type of cancer affecting the white blood cells.

Ms Bourne continued: ‘It was devastating. Cancer hadn’t even entered my thoughts.’

Transferred to Birmingham Children’s Hospital, Jaye began a course of high-dose chemotherapy, the side effects of which saw him take a year off school.

She added: ‘Our lives were turned upside down, but we survived by focusing on reaching our happily ever after.

‘Jaye was amazing – never complaining. All he wanted was to get back to school and finish his exams.’

As Jaye neared the end of his treatment in April 2016, Ms Bourne started having stomach pains, bloating, dizzy spells and rectal bleeding.

Diagnosed with endometriosis at 18 – a painful condition where tissue that behaves like the lining of the womb is found in other parts of the body – medics initially thought it had become more severe. 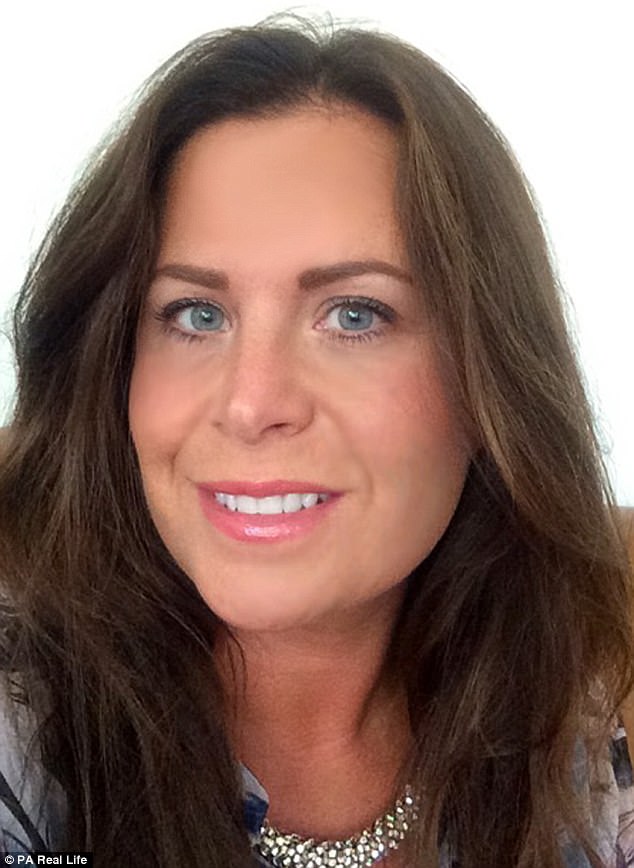 Ms Bourne believes the delay in receiving a diagnosis, which has cost her her life, is partly due to the lack of awareness around symptoms 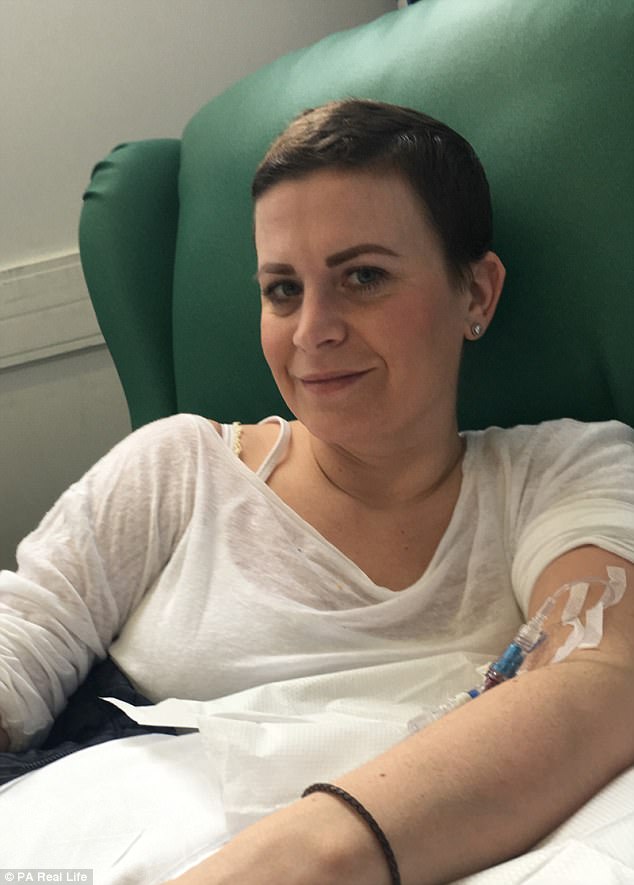 Just as had happened with Jaye, Ms Bourne’s health rapidly deteriorated on a family trip to Devon in September 2016

An ultrasound scan was clear, but Ms Bourne, who still feared something more was wrong, then grew so bloated that her twins thought she was expecting another baby.

And, just as had happened with Jaye, her health rapidly deteriorated on a family trip to Devon in September 2016.

She recalled: ‘I’d been told it was unlikely to be cancer, but doctors understood my fears, given what we’d been through with Jaye.

Telling Jaye I now had cancer, after he’d fought so hard to get well, was one of the worst things I’ve had to do

‘We were in Devon again when my stomach was getting larger by the day.

‘I Googled my symptoms, despite knowing you shouldn’t, and a page about ovarian cancer came up.

‘I told Richard and, again, we drove home to the doctor, where I asked for a CA125 blood test, which I’d read could detect ovarian cancer.’

But, returning for her test a couple of days later, doctors felt her swollen stomach and sent her straight to Good Hope Hospital.

There, a scan revealed a huge build-up of fluid containing cancer cells, six litres of which was drained that day.

The results of the blood test then showed elevated tumour markers, though at that point, she wasn’t sure exactly what type of cancer she had.

But doctors said they’d seen two growths in her abdomen.

Then, a biopsy identified the primary tumour site in her fallopian tube, meaning the initial ultrasound had missed it. 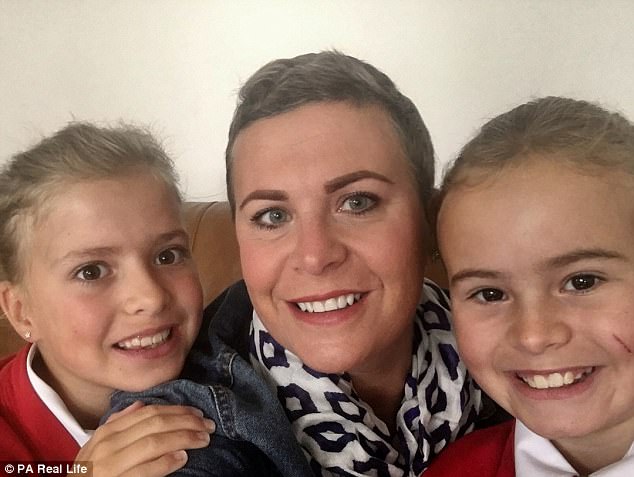 In October, Ms Bourne began a course of chemotherapy, which ended in January this year (pictured with Grace, left, and Eve, right) 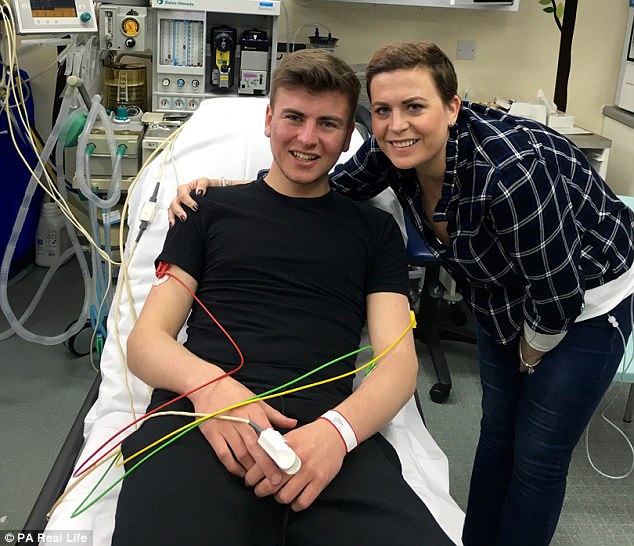 Speaking for the first time about her ordeal, she said: ‘Telling Jaye I now had cancer, after he’d fought so hard to get well, was one of the worst things I’ve had to do’

Ms Bourne said: ‘I was devastated. Our three children had just gone back to school after everything with Jaye and now this.

‘My main thought was, “Am I going to survive?”

‘Going from the mum of a child with cancer to a mum with cancer was a bizarre, very emotional situation, but I thought, “If Jaye can do this, so can I”.

‘The only way you can begin to recover from news like that is to have a plan to focus on.’

In October, Ms Bourne began a course of chemotherapy, which ended in January this year.

She also underwent a 10-hour operation to remove the tumour, her spleen, diaphragm and part of her bowel, which contained multiple tumours, at Birmingham’s City Hospital.

After finishing three rounds of post-operative chemotherapy in June, there was no more evidence of disease.

Her tumour markers – cells produced both by cancerous and other benign conditions – were slightly high.

However, she agreed with doctors to take a short treatment break, to spend quality time with her family.

But it came back…

Just weeks later, though, in September – around a year to the date of her first diagnosis – her back began to hurt.

A check-up revealed the cancer was back and spread to the pleural cavities – the fluid-filled spaces between her lungs.

Ms Bourne who, along with her family and friends, has raised £10,000 for various cancer charities, hopes to be accepted on a clinical trial. 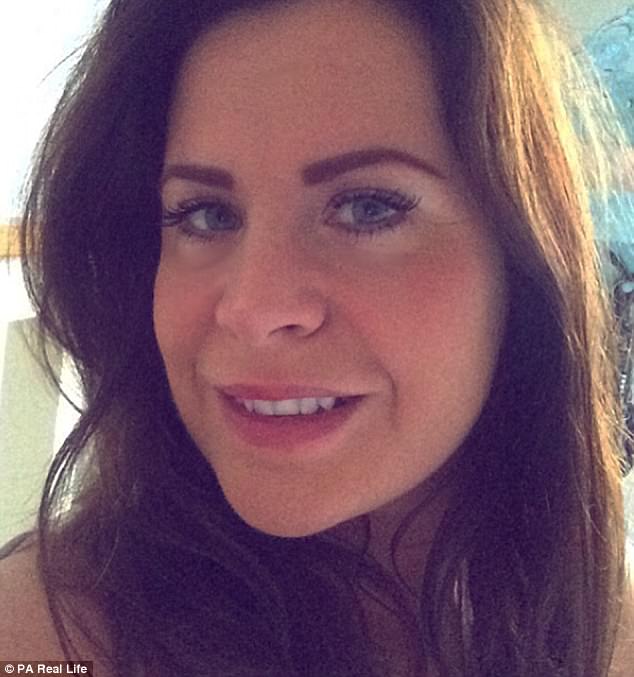 Despite her future being uncertain, she is working closely with the charity Target Ovarian Cancer and using her experience to raise awareness of symptoms 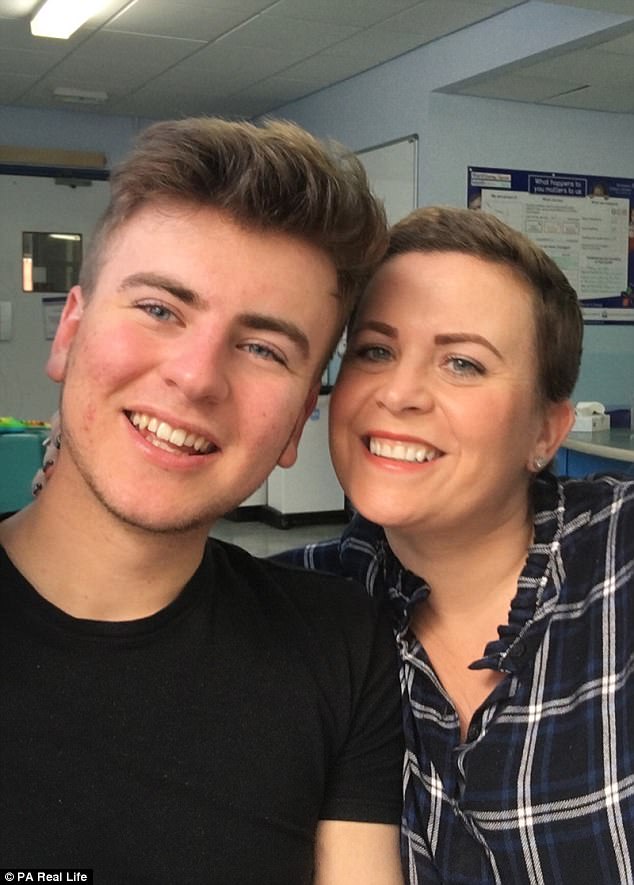 Cancer first struck the family in 2013, when Jaye became too exhausted to compete in the sports he once loved, and developed lingering coughs and back pain 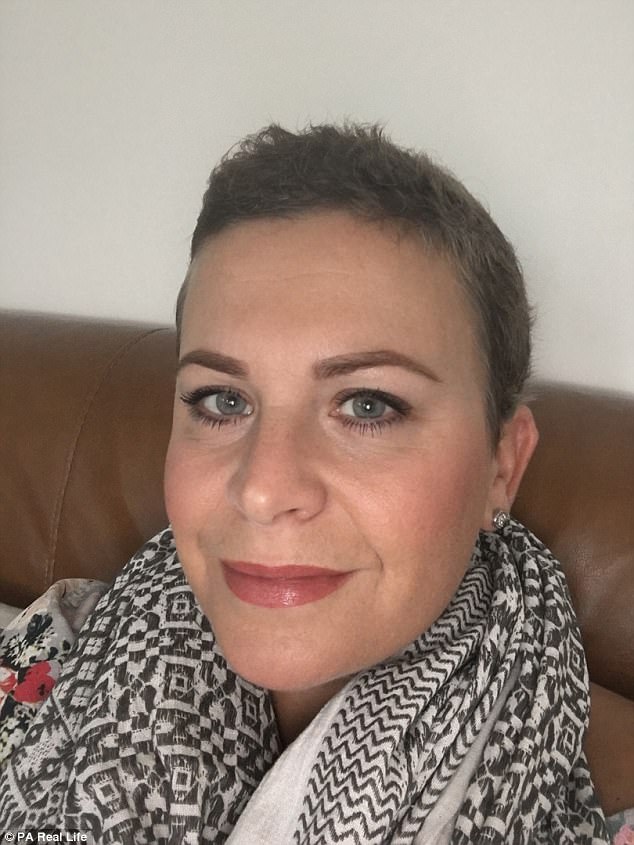 As Jaye neared the end of his treatment in April 2016, Ms Bourne started having stomach pains, bloating, dizzy spells and rectal bleeding

It will be at London’s Royal Marsden Hospital and is designed for patients who have relapsed quickly and built up a resistance to certain types of chemotherapy.

Despite her future being uncertain, she is working closely with the charity Target Ovarian Cancer (TOC) and using her experience to raise awareness of symptoms.

They include: persistent bloating, loss of appetite/feeling full quickly, pelvic or abdominal pain, fatigue, weight loss and changes in bowel or urinary habits.

She is speaking out as recent TOC research reveals only one in five women can name bloating as a sign of the disease.

And just 45 per cent of GPs mistakenly believe symptoms are only present in its later stages.

Ms Bourne said: ‘My main message is to persevere. It’s not that the doctors didn’t listen to me, but I shouldn’t have been diagnosed in A&E.

‘The medical teams in the hospitals who treated me were absolutely fantastic, but at the end of the day, you know your body better than anyone – and I knew something was wrong.

‘I thought I was there with Jaye when he was going through it, but I now know what a lonely place cancer can be.

‘I look back and think, “Did I really manage to get through all that?” but I had to do whatever it took for the children’s sake.

‘I’ve had fantastic support, though and, while I’m not in the healthy place I hoped I’d be, for as long as I’m able to, I want to help people.’

A chronic lack of awareness

Target Ovarian Cancer Chief Executive, Annwen Jones said: ‘There is a chronic lack of awareness and funding for ovarian cancer.

‘We urgently need a national awareness programme for ovarian cancer and investment in research into new treatments.

‘We have seen enormous advances in other cancers, but ovarian cancer is lagging behind. With investment, we know we could see similar progress.’