Mother-of-two describes being allergic to exercise

No one ever believes Sarah Manning Norton when she tells them she’s allergic to exercise.

Her exercise-induced anaphylaxis is under control, but it still keeps her from riding alongside her husband, Bill, an avid cyclist, or jumping on the trampoline with her two children.

Spontaneous activities like those could bring on an anaphylactic episode, and, if ignored, progress into cardiovascular collapse.

The first time Norton had an attack, at the age of 17, she’d been dancing along to a Spandexed Jane Fonda’s aerobic workout routine on television in her parents’ bedroom in Taunton, Massachusetts.

She stopped abruptly to take a phone call, and laid down on the carpet. She felt her her chest tightening, like she was having an asthma attack.

Agony: Sarah Manning Norton can’t ride bikes with her husband, Bill (pictured), an avid cyclist, because she is allergic to exercise. The Massachusetts couple can still enjoy things like their trip to California, but Sarah still has to be careful of what and when she eats before taking walks in hilly areas like this one, to prevent exercise-induced anaphylaxis

Then, Norton broke out in hives. She thought maybe it was just a reaction to her parents’ taste in decor: the itchy orange wool rug she was lying on.

But the dizziness and ringing in her ears shouldn’t have come from a reaction to even the worst rug.

Norton remembers calling out to her mother, and dragging herself into the shower to try to wash off whatever was making her break out in hives.

Her mother couldn’t find anything in the house to alleviate the bizarre reaction, and had to drive to the homes of two aunties before she managed to rummage up some antihistamine-type medicine. 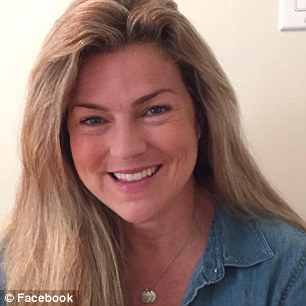 Norton, 47 has successfully managed her exercise-induced anaphylaxis and stays healthy by carefully monitoring what she eats and how soon after a meal she does barre classes, or works out to Beachbodies videos

‘I guzzled the medicine as soon as she got back, and passed out for quite some time before waking up (thankfully), still completely baffled about what had suddenly come over me,’ she recalls, adding that she’s still not sure what medication she received to cure her.

Norton was a high school tennis and field hockey player, and exercised regularly. She’d never thought that exercise might actually be bad for her.

Whenever Norton felt the symptoms coming on, she’d just play through them then take some Benadryl and a long nap.

After she had gone away to college at University of Massachusetts, Norton’s mother called her to tell her she’d had a ‘eureka’ moment, watching an evening news segment about people collapsing while working out because the didn’t realize they had exercise-induced anaphylaxis.

‘She called me in a complete panic, demanding I never work out again!’ Norton says.

Exercise-induced anaphylaxis is a severe allergic reaction that comes on during or immediately after exercising.

The allergy is rare, and not particularly well-understood. Its symptoms include itchy skin, hives, flushing, wheezing, nausea and abdominal pain and difficulty swallowing or breathing. 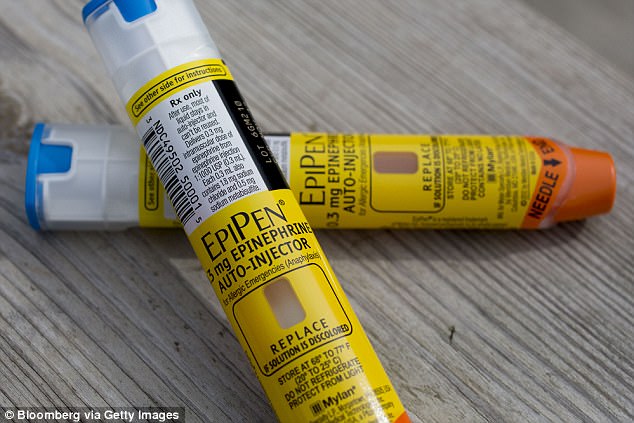 Treatment: Even short walks in hilly areas have been known to bring on Norton’s exercise allergy, so she carries an EpiPen. Even doctors were skeptical of her allergy at first and told her to use Benadryl, but the EpiPen helps the mother of two feel safer and more confident

Exercise-induced reactions can come on without the involvement of any other factors, but anaphylaxis often happens with exercise plus another factor.

Carbohydrate-heavy foods like bagels are typically safe for Norton, but ‘protein seems to be my Kryptonite,’ she says.

According to Medscape, wheat, shellfish, tomatoes, peanuts, and corn are commonly associated with exercise-induced anaphylaxis, but it isn’t limited to these.

Eating any ‘trigger food’ a couple of hours before exercising can cause or increase the chances of analphylaxis.

Exercise-induced allergies can also come on with the use of aspirin, aspirin and food, exposure to cold, and, in at least one case, exposure to cereal mites, according to a fact sheet from the Anaphylaxis Campaign.

Research hasn’t revealed a clear reason why exercise leads to anaphylaxis, but scientists think it may be related to the effect of exercise on the the gastrointestinal tract, digestion and enzyme production.

There is no cure for exercise-induced anaphylaxis, but typically, attacks become less severe and frequent as time goes on, especially if the right precautions are taken.

Norton says spontaneous or long bouts of exercise are still a risk to her, but she still works out along to exercise videos at home in Winchester, Massachusetts (though she’s traded Jane Fonda in for the Beachbody series), and even once ran the 7.1 Falmouth Road Race.

Are you allergic to your workout regimen?

Unlike many food or environmental allergies, there isn’t a clinical test for exercise-induced anaphylaxis. But, you should talk to your doctor if you experience the following during or right after exercise:

It’s been 20 years since she has had an attack, but she carries an EpiPen just in case.

Exercise-induced anaphylaxis had been seen to occur in families, and Norton worries that her children, ages 10 and 13, could develop it. ‘The allergy can literally lay dormant until the two factors align in the most unfortunate way, like they did for me, after so many years,’ she says.

‘There really is very little awareness, particularly in school communities (including school nurses), despite so much attention to food allergies,’ Norton says.

For now, she alerts her children’s school, and keeps a close eye on how they respond to exercise, taking ‘opportunities’ to ‘recruit them to work out along side me,’ Norton says.