Mother-of-two lost £80,000 after turning to a con artist on Facebook who made her ‘feel loved’

A mother who ended her 29-year-relationship for a con man she met on social media has issued a warning to others after sending more than £80,000 to a fraudster who used pictures of Latvia’s silver fox defence minister to reel her in.

Sharon Bulmer, 51, from Manchester, spent more than two years speaking to a fraudster posing as ‘Murphy Townsend’, a US soldier who needed money to leave Syria and visit her.

She began speaking to the scammer, who used suave photos of Latvia’s Minister of Defence, Artis Pabriks, when he sent her a message on Facebook in May 2020, claiming to be ‘lonely’.

After he told her a string of lies about needing money for flights and hospital bills, the mother-of-two handed over around £43,000 from her own savings over a two-and-a-half year period, and is now £37,000 in debt after taking out loans.

Sharon Bulmer, 51, (pictured) from Manchester, sent nearly £80,000 to an individual who contacted her on Facebook posing as ‘Murphy Townsend’

The Latvian Defence Office said it has reported more 100 fake profiles using images of Artis Pabriks and has been ‘facing this situation for a long time’.

Sharon explained how she was duped, saying: ‘He asked me to help him and I did, but over the time it’s got me into huge debt and because I have fallen for this person.

‘I just wanted to help him so much. I know I have been a fool but these are the things we do for love.’

The person behind the account claimed to be a 56-year-old man from Washington DC, with a 17-year-old daughter called Helen.

‘Murphy’ told Sharon he was serving with the 37th Infantry Brigade Combat Team at Base 29 in Raqqa, Syria.

But, when Sharon enquired with the US authorities, she was told there was no ‘Murphy Townsend’ on their records at all.

‘He always kept things close to his chest. He didn’t like me asking questions,’ she said.

Sharon had ended her relationship with her partner of 29 years in order to ‘start a new life’ with ‘Murphy’. 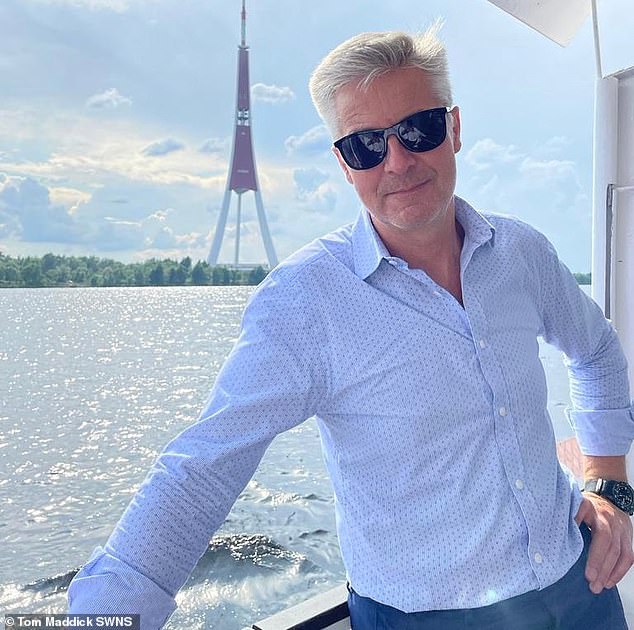 She then handed over nearly £80,000 over a two-and-a-half year period for various hospital bills and plane tickets – and is now in £37,000 of debt.

Sharon, who is a team leader at a Covid site, sent ‘Murphy’ the cash in Bitcoin.

The con artist avoided having a video call with her by claiming that he wasn’t allowed to at his base.

The mother-of-two is hoping that sharing her story will stop other people from being tricked the way she was.

Sharon said: ‘I wanted to take my children on holiday, I was going to take them to New York last year, but because he was constantly hammering for money I couldn’t.’

‘I want to help anyone out there to not be taken by these idiots and just try and get on with my life.

‘Murphy’ first got in touch with Sharon in May 2020 by sending her two Facebook messages.

She said: ‘He said he was lonely, he’s serving in Syria, his wife had passed away and he just wanted someone to speak to.

‘He said he’d been watching me on Facebook, I don’t know what that means.’ 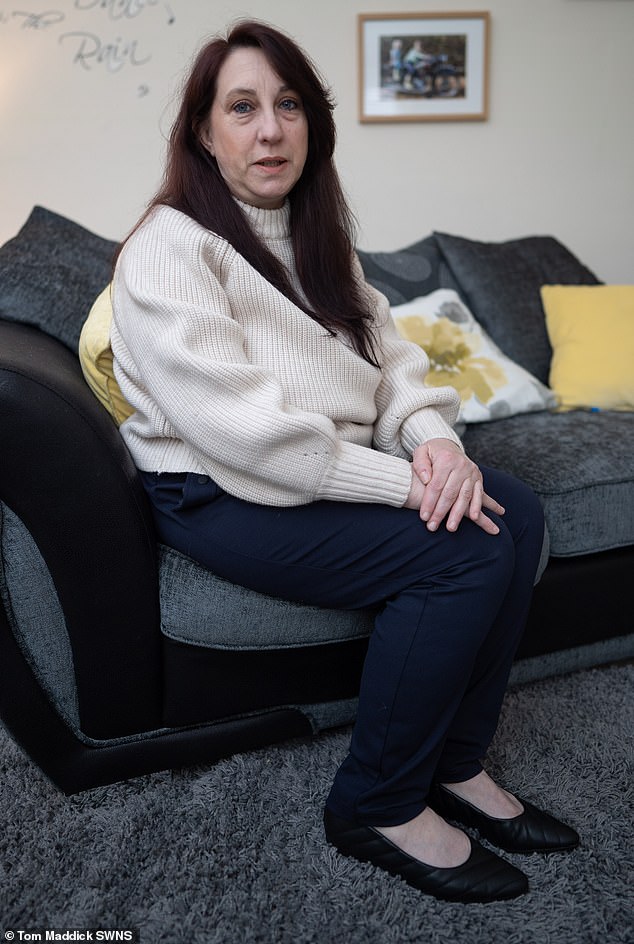 Despite having two children together, Sharon (pictured) split up with her partner of 29 years in the hopes of starting a ‘new life’ with ‘Murphy’

After exchanging a few messages, Sharon gave Murphy her email address and they continued the chat on Google Hangouts.

She said: ‘Murphy was sweet when I first met him, nothing at all made me think anything different about him.

‘He was very interesting when I kept talking to him.

‘I felt loved in a way, I felt cared for. I think it’s because he’s an older person, he had an older head.’

At the time Sharon was in a relationship with a man who’d she’d lived with for 29 years, and they had two children together.

‘I fell out of love, I wanted more and that’s where Murphy came in. He promised me the world and god knows what else,’ Sharon said.

Murphy asked if he could visit Sharon in Manchester after speaking online every day.

Once she accepted, he asked to send £1,400 via Bitcoin to pay for his flight.

‘He said it was the safest way to do it,’ she said.

But after not hearing from Murphy for a few days, she received a message from a different email address, but also with the name Murphy Townsend.

They asked for another £15,000 for the plane ticket and, believing it was Murphy, Sharon paid up. 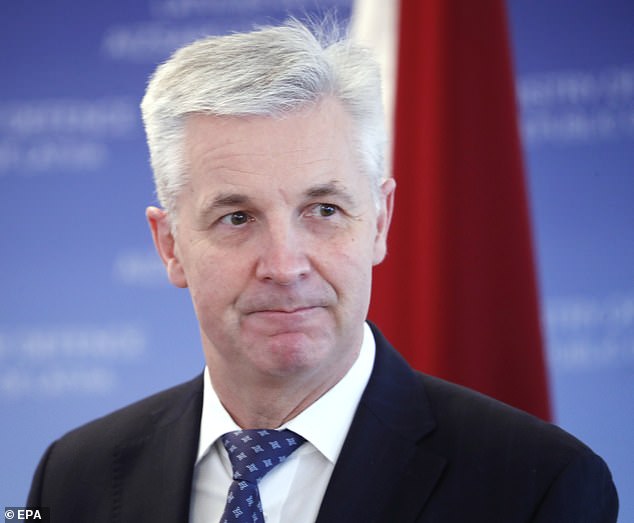 Sharon sent the con artist money via Bitcoin, including £1,400 for an initial flight and a further £15,000 for a plane ticket. Pictured: Artis Pabriks, whose photos were stolen for the scam

At the end of the month, she received a message from someone claiming to be a doctor who said that Murphy had been taken into hospital.

She said: ‘He said, “He’s unconscious but he’s OK, everything is going according to plan and we’re keeping him in hospital”.’

Sharon didn’t ask which hospital he was in but, believing Murphy was injured, she didn’t contact him until he messaged her at the start of October.

She said: ‘He wanted to know where I’d been when I’d not been in contact with him. That’s when I told him I’d been scammed by someone else using his email address.

‘He couldn’t believe it.’

Murphy claimed that he’d been shot in the side on the way to the airport, and that he was due to stay in hospital for another six weeks.

He also said he was unable to return to the army base because he’d lied and told them he was leaving to back to his family in the States, rather than his British lover.

Sharon then twigged that the messages she got from the second email address was a scam.

She said: ‘I said, “Have you lost anything?”, and he said, “I lost my computer when I went down”.

‘So that’s when I knew that’s where the scammer came in, they would have had a look at the computer I think.’ 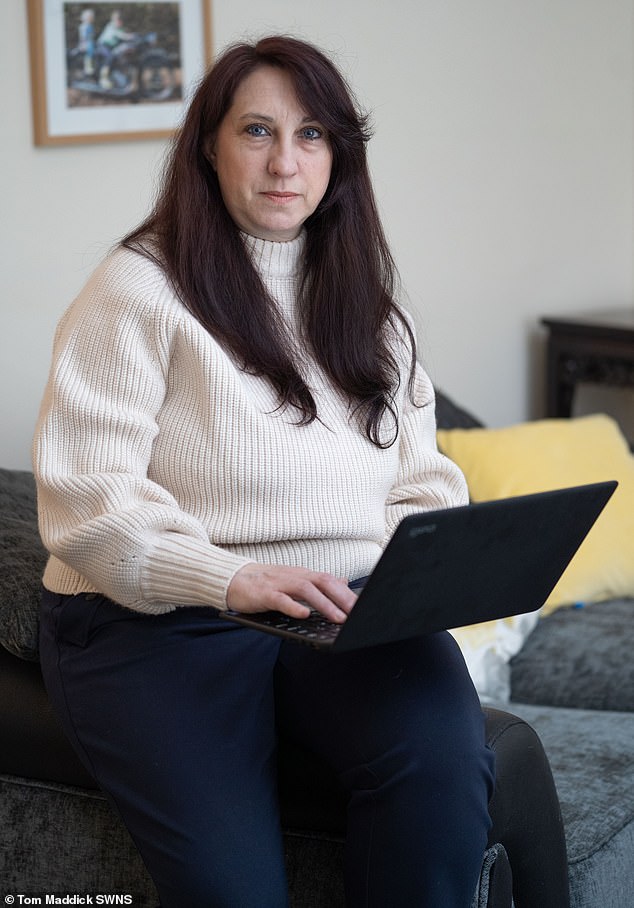 Murphy then asked Sharon for £5,000 to help with his medical bills, which she paid, before announcing that he wanted to leave the army for good and move in with her in Manchester.

‘When he gets out he’s going back home, sorting a few things out, bringing his daughter over here, and we’re all setting up a new life,’ she said.

In October 2020, he started asking for weekly payments, between £600 and £1,000 to cover the cost of administration fees, airlifting fees and to ‘buy him out of his contract’.

She said: ‘The transactions were long as my arm. I’ve literally fallen in love with this person, I hope to God he is Murphy.’

But in the end he claimed he lost his plane ticket, so would still not be able to see her.

In August last year, when she asked for pictures of him, he sent her a screenshot of photos from the Facebook profile of ‘Mike Douglas’.

Sharon said: ‘I asked him, ‘why don’t you send some information to me?’, some pictures in your uniform and stuff like that. 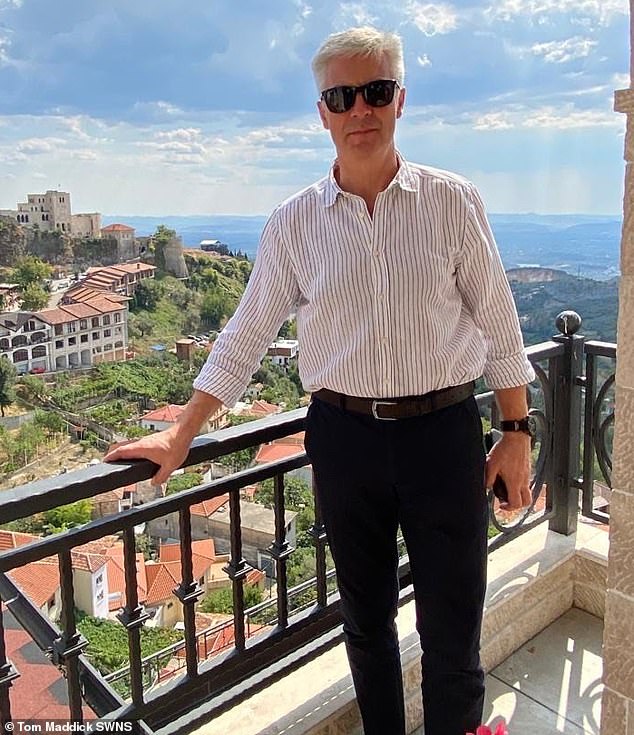 Sharon noticed that the scammer created a Facebook account using the photos with a new name, however she continued transferring money. Pictured: Artis Pabriks, whose photos were used for the con

‘He sent me some pictures but he sent them through Mike Douglas, so when I questioned him, he said because we can’t use Facebook when we’re on a mission.’

He also claimed that his original Facebook page had been hacked by the men who stole his computer, and that is why a different name of ‘Mofsjol Dukhan’ has appeared on a page using his photo.

‘He deleted his Murphy Townsend off Facebook, but now somebody’s created another one again but it’s an Asian name,’ she said.

In November last year he asked for £2,000 to see his daughter in Washington, and then a further £5,000 for the medical assessment he needed to board the plane that she paid for late last month.

Up until a final £900 transferred last week, Sharon has paid over £80,000 towards what she believes is getting Murphy out of Syria and to see her.

Despite never having a video call, Sharon never questioned his intentions, up until asking for proof of his medical assessment from a doctor.

Murphy sent her a copy of a letter from ‘Dr Abdulrahman Alomair’, a Paediatric Orthopaedic Surgeon.

He sent a letter from Al Mouwasat University Hospital that said he was part of a a ‘pedestrian-vehicle traffic accident’ in September 2020 that he is currently in intensive care.

She said: ‘He is supposed to be in hospital with a serious condition from his accident, but why all of a sudden is he in hospital but never complained about any pain in the year we have been together? 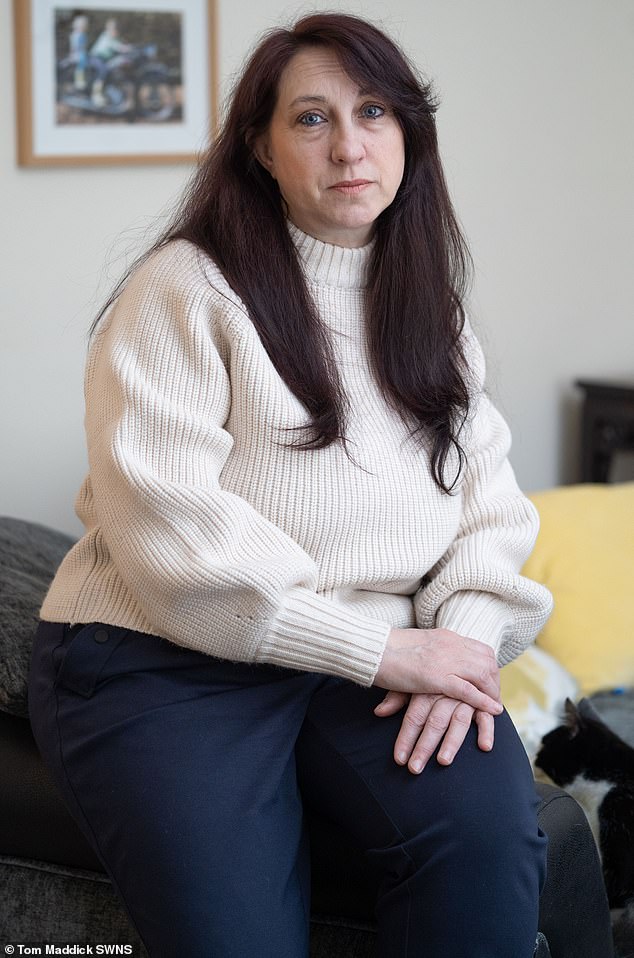 Sharon (pictured), who chose not to tell her family about the scam, said the con artist asked ‘are you dumb’ when she questioned his claims of being in the Army Reserve

‘The letter is signed by a doctor who treats children with special bones. I don’t get it.’

Suspecting she has been scammed, Sharon then approached the US Army to ask whether there was anyone named Murphy Townsend serving.

They responded saying ‘there is not anyone by the name of ‘Murphy Townsend’ currently serving in the Army Reserve’ or as a General Officer.

They also said that the 37th Infantry Brigade Combat Team that he claims to be part of is from the Ohio National Guard and not the Army Reserve.

There are no LT Generals in that team.

She said: ‘I questioned him on that and he turned round and sent to me are you dumb.’

She hasn’t told her family but Sharon is in thousands of pounds of debt after sending the money to Murphy.

She said: ‘My ex does slightly know of him, but he doesn’t know all the ins and outs.

‘No one else know, I want to keep my family out of it.

‘They are starting to be suspicious though.’

Sharon wants to share her story to prevent others becoming victims of romance fraud.

She said: ‘I want to help anyone out there to not be taken by these idiots and just try and get on with my life.’

The Latvian Defence Office confirmed it was aware of the continuing issue of identity theft involving the Defence Minister Artis Pabriks.

A spokesperson said: ‘Unfortunately, we have been facing this situation for a long time.

‘We receive information about the various fake profiles that use the name and images of Mr. Pabriks on Facebook and Instagram both from the users of the social networks themselves, and our partners and colleagues in other countries.

‘We frequently receive screenshots from people who have been contacted by fraudsters and, recognizing the official accounts of the Defense Minister, choose to report them.

‘So far, we have collected and reported to Facebook more than 100 fake accounts, but the response has been negative.

‘We feel that the security of everyday users both on Facebook and Instagram needs to be strengthened and supported in situations like these, and we encourage Facebook to pay more attention to these kinds of cases.’