A mother-of-two has received death threats and been accused of abusing her children after choosing to breastfeed her daughters on demand for five years.

Lactation consultant, Melissa Ostroth, 34, from Toledo, Ohio, always knew she would practice natural-term breastfeeding with her children after watching her own mother breastfeed her brothers when she was a child.

However after receiving abuse from online trolls, Melissa, who has been practicing natural-term weaning – which allows her children decide when they wish to stop breastfeeding – has said no mother feel ashamed of the act.

Melissa, who shares daughters, Emilia, four, and Wrenly, two, with her husband Steve, 34, has been breastfeeding for five years with just a three-month break between her two daughters. 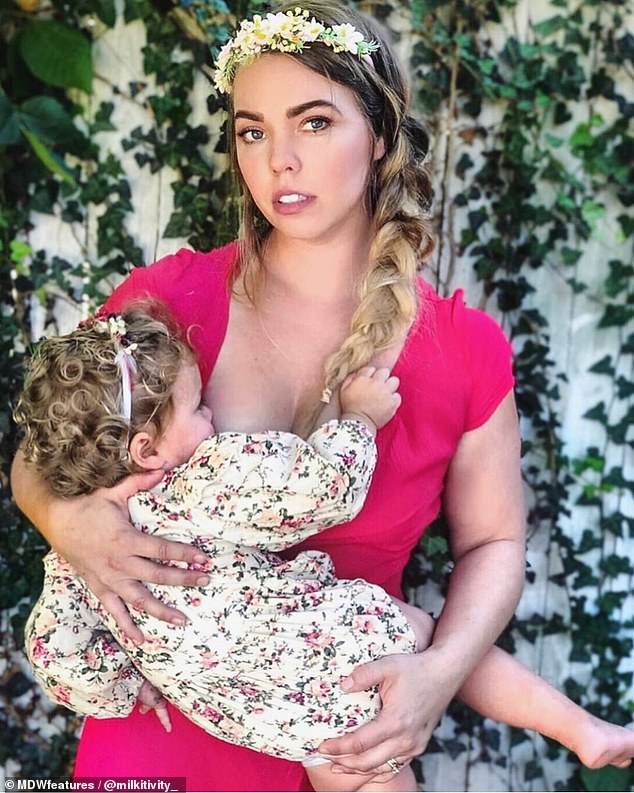 Her eldest self-weaned when Melissa was 20-weeks pregnant with Wrenly because she did not like the taste of colostrum.

Melissa continues to breastfeed on demand, which can be anywhere between six to 10 times per day, and shares her journey on Instagram under the handle @milkitivity.

She now hopes to be an inspiration to other mothers to show them that they should not feel ashamed of breastfeeding their children past the age of one.

The mother-of-two has lots of like-minded followers on social media who support her message but she has also been subjected to abuse from cruel trolls online who have sent her death threats, accused her of child abuse and told her she’s only breastfeeding for her own benefit and that she needs to cut the cord.

Melissa, who has studied infant nutrition for four years, says the biggest misconception surrounding natural term or extended breastfeeding is that breastmilk declines in nutritional value as a child gets older, something Melissa says is not the case. 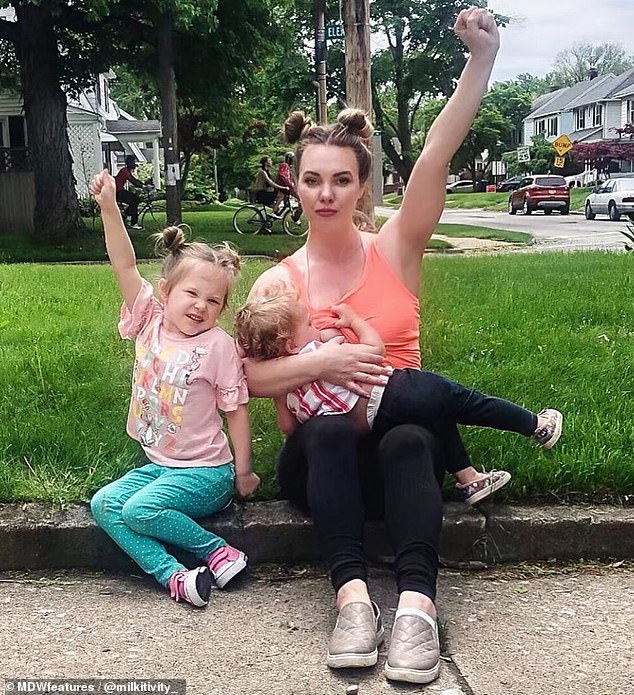 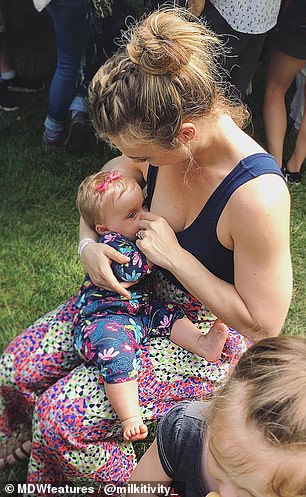 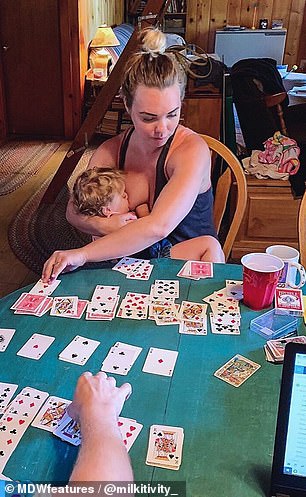 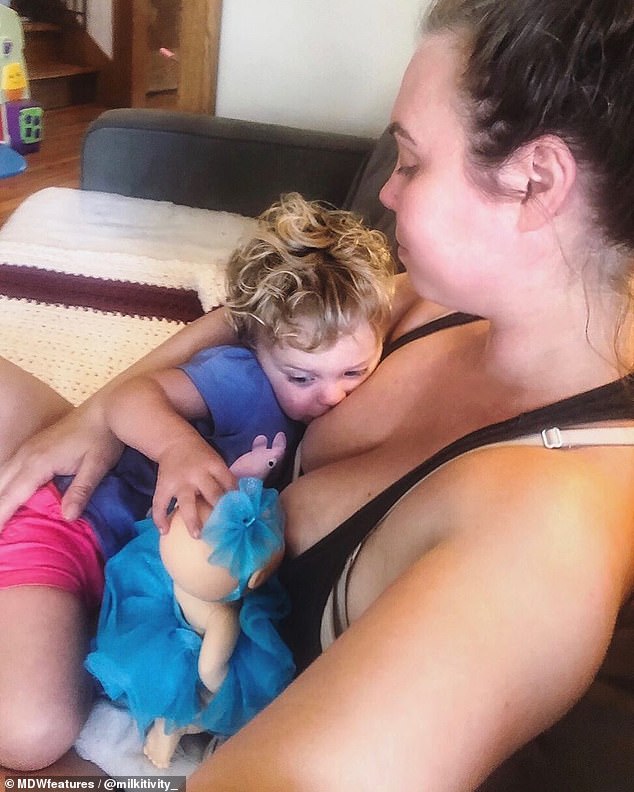 She said: ‘Breastmilk changes with a child’s needs and age. That’s the beauty of breastfeeding. It increases in proteins lactoferrin, lysozyme and immunoglobulin A.

‘Breastmilk provides all the immunoglobulins the immune system takes to develop, which takes around five years. Why? Because we were designed to continue breastfeeding past infancy.

‘Aside from the health benefits, breastfeeding is more than just food. It is comfort, a natural anti-anxiety, a sleep aid, natural anxiety, and a bonding love.

‘I breastfed my first until I was 20 weeks pregnant when she self-weaned. My milk turned back into colostrum and she didn’t like the taste of it. I remember watching my mother breastfeed my brothers. I’ve always felt comfortable breastfeeding; I know that was the right decision for our family. 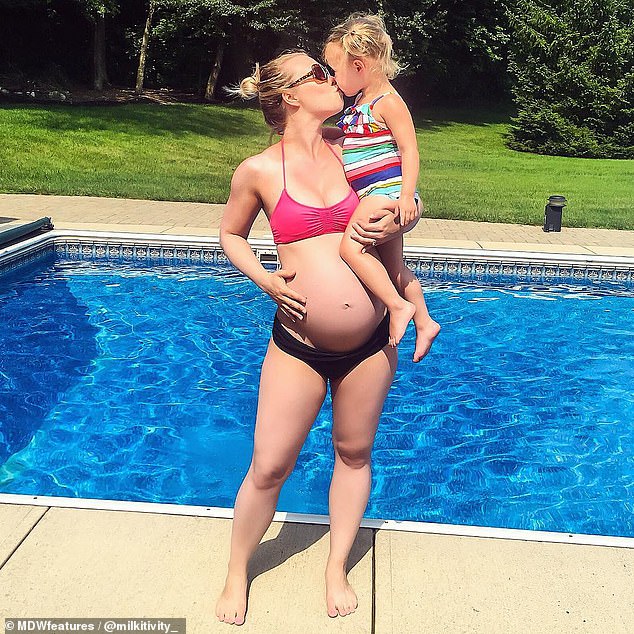 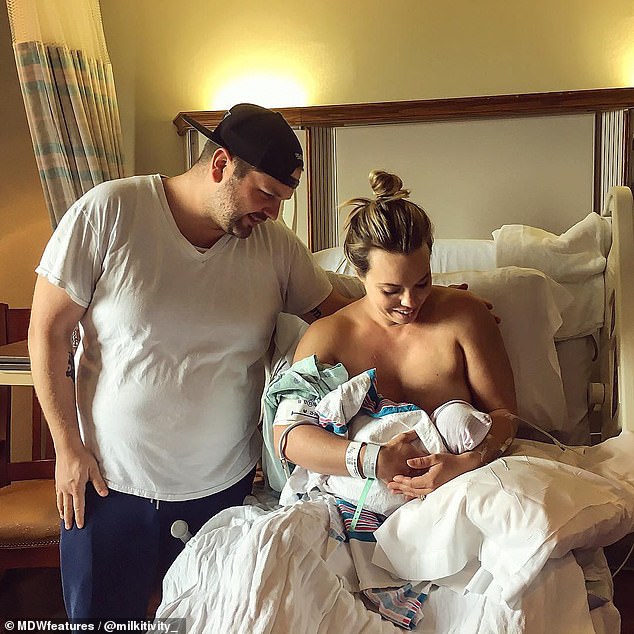 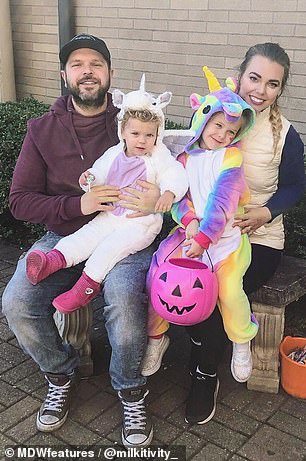 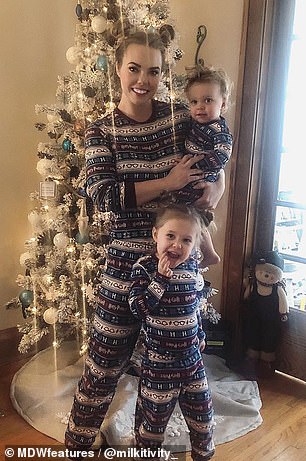 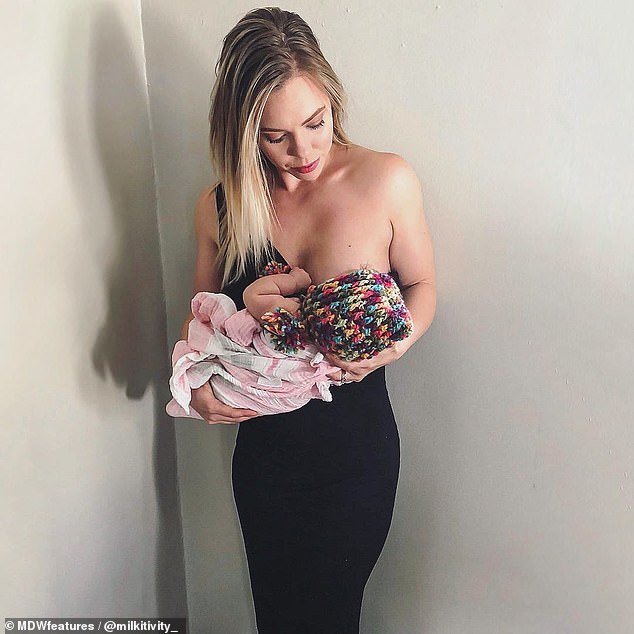 Melissa (pictured with Wrenly) said the beauty of breastfeeding was that it increased in proteins lactoferrin, lysozyme and immunoglobulin

‘Online I receive a lot of positive feedback, but also some very negative and hateful remarks. In public, I’ve been thanked for breastfeeding my child without a cover and not in a restroom.

‘I receive many negative comments, even death threats and requests that I kill myself. The internet can be rough, but the positives keep me going.

‘The messages where a mom tells me that they needed to hear that today, and because of my post they have the confidence to keep breastfeeding as they had intended to.

‘So many mothers, including myself, have had to endure comments and questions such as; ”When are you going to cut the cord?” or, ”You know there’s no benefits from breastfeeding past x amount of months”, or, ”At this point you’re just doing it for yourself.”

‘Even worse comments like “this is borderline abusive, and CPS should be called on you”. 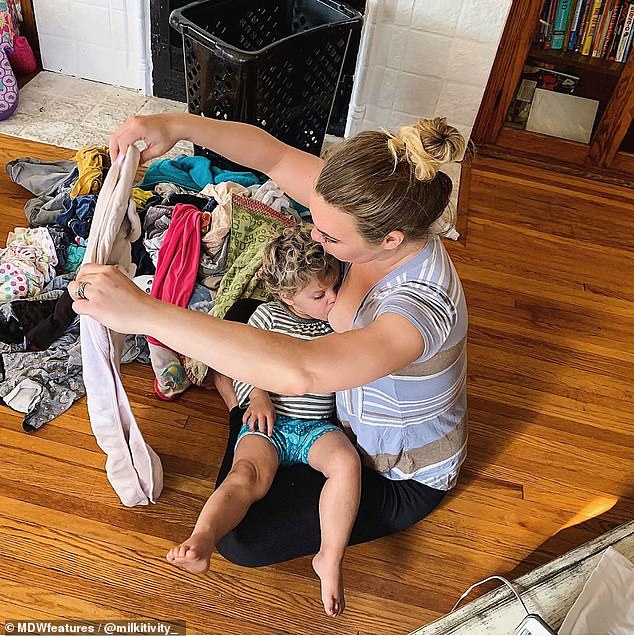 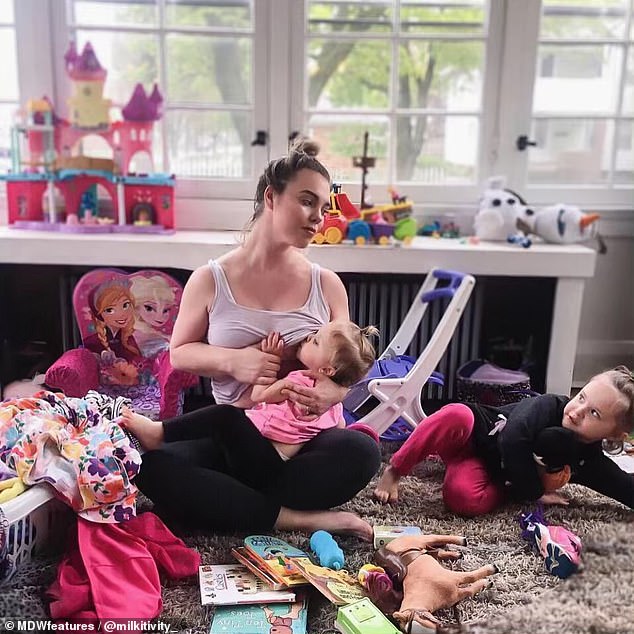 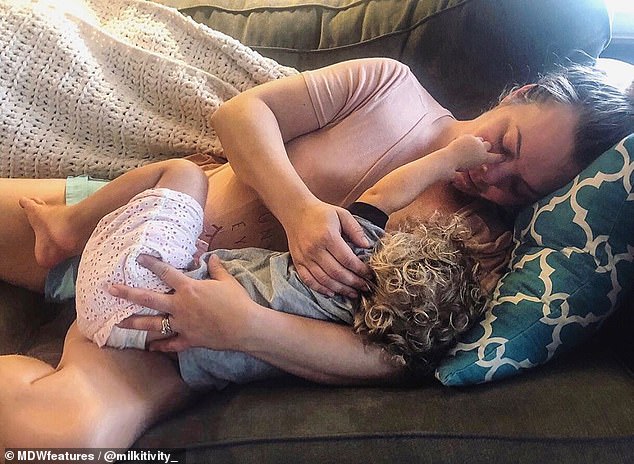 ‘In today’s society it seems the majority are uneducated and do not understand natural term weaning, although we’ve been doing this since the beginning of time.

‘Society has a tendency to sexualise extended breastfeeding or have the idea that it’s all for the mother’s own benefit.

‘I manage a breastfeeding and parenting support page and as soon as a child over the age of one is featured breastfeeding, the shaming comments start rolling in.’

Melissa is dedicated to practicing natural term weaning and explained how breastfeeding a toddler is a new challenge.

She continued: ‘It comes with a whole new set of challenges. Some (like mine) will want to continue to breastfeed every two to three hours. 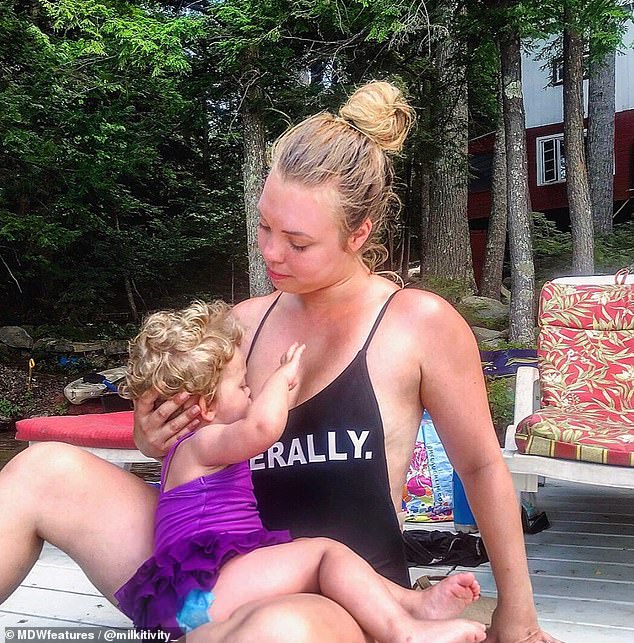 ‘Although these sessions tend to be shorter, they tend to be rougher and the child is more easily distracted.

‘Just like any child they will also want to nurse at inconvenient times, they just happen to be much bigger and vocal. With an older child you usually have to instill boundaries which can be hard.

‘There are so many opinions surrounding natural term weaning. Many mothers hide the fact they are still breastfeeding.

‘I want mothers to know they are not alone, to remind them of the benefits, why they should feel comfortable to continue to breastfeed, and give them some answers they can tell others who ask them about it.’ 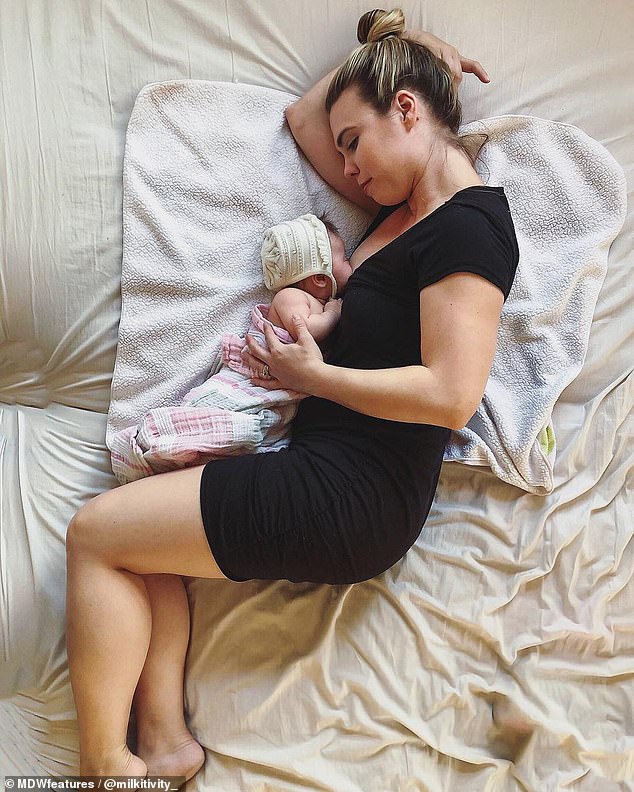 Now looking to the future, Melissa hopes to spread breastfeeding information on her Instagram page and wants to encourage more women not to feel ashamed of the practice.

‘When it comes to extended breastfeeding, I want people to know the facts. I want them understand why mothers decide to parent in this way. It’s not for ourselves, it’s not always easy, but it’s what works for our family.

‘We do it for the benefits physically and emotionally. And yes, we both benefit from it. We do it because both our child and we desire to do it.

‘It’s ok to want to continue to breastfeed past infancy.

‘It’s not taboo, it’s not unnatural, and it’s not selfish. Our child still has a need and we are responding to that.’