A mother has slammed IKEA after her oven door exploded, showering her kitchen floor with shards of hot glass.

Emma Clark, 37, said it was fortunate her children were not in the room when the glass in the £375 appliance – which is less than a year old – shattered.

The shards were so hot they scorched recently-installed flooring which cost £600 to install.

An IKEA spokesman today admitted the tempered glass used in the £375 Mattradition forced-air ovens, made by Whirlpool, has ‘a tendency to explode’.

Emma Clark, 37, pictured with her daughter, said her £375 Whirlpool-made IKEA oven door exploded sending hot shards of glass all over the floor 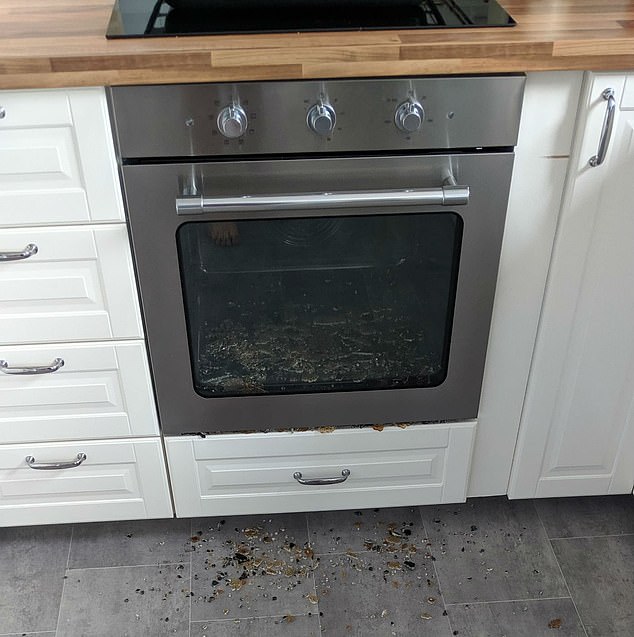 An IKEA spokesman said the glass doors ‘have a tendency to explode’ and that it would investigate the incident. Pictured is the shattered door on the Mattradition oven

Ms Clark, who lives near Cockermouth, Cumbria, had set the oven to self-cleaning mode when she heard a loud bang.

She posted on Facebook to alert IKEA to the problem, writing: ‘IKEA Mattradition Oven. Less than a year old and the inner door just exploded sending hot glass out through the bottom and across the floor.

‘I rang the number in the booklet only to be told ‘it wasn’t one of their ovens’ and to call the same number tomorrow. Thankfully my kids weren’t in the room at the time’.

Ms Clark, who has children aged three and six, said the oven was at a temperature of 480F at the time of the explosion.

Speaking today she added: ‘It was a huge shock, I was worried – nothing like this has happened before. I was just relieved that nobody was hurt.

‘It’s damaged my new vinyl floor and we’re going to have to go through the insurance to get that fixed, so it’s a hassle.’

The IKEA spokesman said the firm would investigate the incident as a ‘product safety issue’ and added that the tempered ‘safety’ glass used for the oven door has previously been known to shatter.

He said: ‘The tempered glass has a tendency to explode, but we wouldn’t really know what has happened without being able to test it. We want to resolve this with the customer and they will not be out of pocket.’

He added that reports of exploding oven doors were ‘not uncommon’, but that this was not just limited to IKEA products.

A Whirlpool spokeswoman added: ‘The safety of consumers is our number one priority and we investigate all incidents thoroughly as soon as they are reported to us.

‘We are unable to comment on individual cases but we would like to reassure other owners of this model that they can continue to use their appliances and we are treating this as an isolated incident. 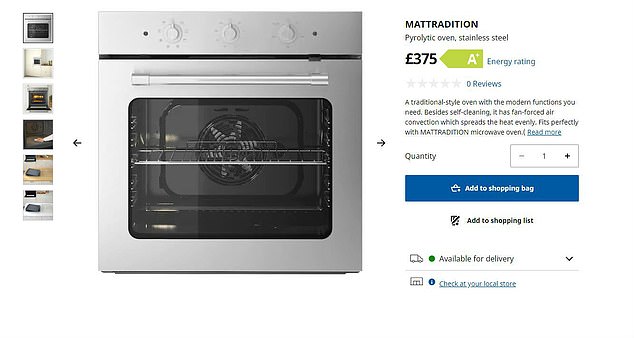 Whirlpool said the appliance, pictured, was safe and that it was likely an isolated incident

‘All our ovens are fitted with safety glass. We urge consumers to always follow the advice provided in their product’s user manual to prevent damage.

‘We advise consumers not to use harsh abrasive cleaners, scourers, or metal scrapers to clean the door glass, as these can damage the surface and may lead to it shattering.

‘Consumers should also avoid subjecting the glass to undue impact or stress, such as placing hot or heavy dishes on the glass, slamming the door shut, or allowing the glass to come into contact with items in the oven during cooking.

‘All our products comply with applicable regulatory and safety requirements and standards. They are also subject to Whirlpool’s own rigorous quality control processes.’

In 2017 the consumer watchdog Which? produced an article highlighting the potential dangers of tempered glass doors.

Which? wrote: ‘Tempered glass is thermally strengthened by heating it to more than 600°C, followed by rapid cooling. The outer layer of the glass cools more quickly, creating a compressed outer layer. This works to protect the inner part of the glass, which cools more slowly.’

‘However, tempered glass is still brittle and can shatter. When it does, it tends to do so suddenly and violently’

Despite being aware of this, the IKEA spokesman confirmed that there were no plans to change its oven doors.