The mother of an 11-month-old boy who was allegedly thrown to his death from a bridge into a river today paid tribute to her ‘cheeky little chappy’.

Zakari William Bennett-Eko was pulled out of the River Irwell in Radcliffe, Greater Manchester, by firefighters after reports that a child was in the water shortly before 4.25pm on Wednesday.

Paramedics on the scene battled to save the boy but he later died in hospital. His father made his first appearance in court today charged with murder.

In a heartfelt tribute, mother Emma Blood, 22, said Zakari was the ‘most wonderful little boy’ who ‘will be the heart of the family for years to come’.

In a heartfelt tribute, mother Emma Blood (pictured with her son) said Zakari William Bennett-Eko was the ‘most wonderful little boy’ who was ‘loved beyond belief’

‘On Wednesday afternoon my life changed forever. I woke up that morning being a mummy to the most wonderful cute little boy and by the afternoon Zakari was taken from me in the most tragic of circumstances’, she said.

‘He was a cheeky little chappy with a smile that melted hearts. He was the youngest of five generations of our family and was loved beyond belief.

Describing her son as having a ‘gorgeous little smile’, Ms Blood, who is believed to be pregnant, also told how she is struggling to ‘comprehend’ his sudden death.

‘Zakari wrapped everyone around his little finger. He was a happy and content baby with a gorgeous little smile and a head full of curls. Everyone that met him fell in love with him instantly.’ she said. 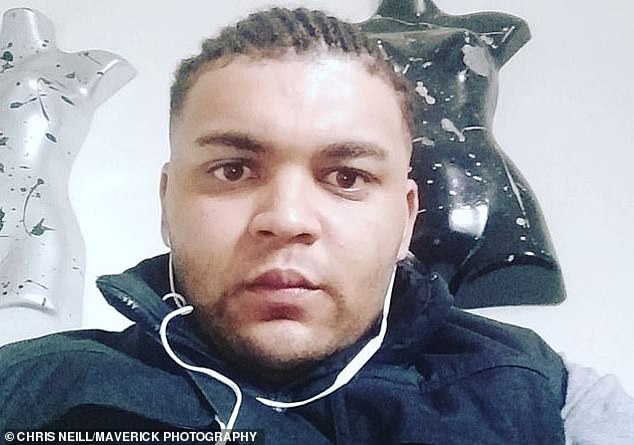 His father Zak Eko (pictured), 22, made his first appearance in court on Friday charged with murder 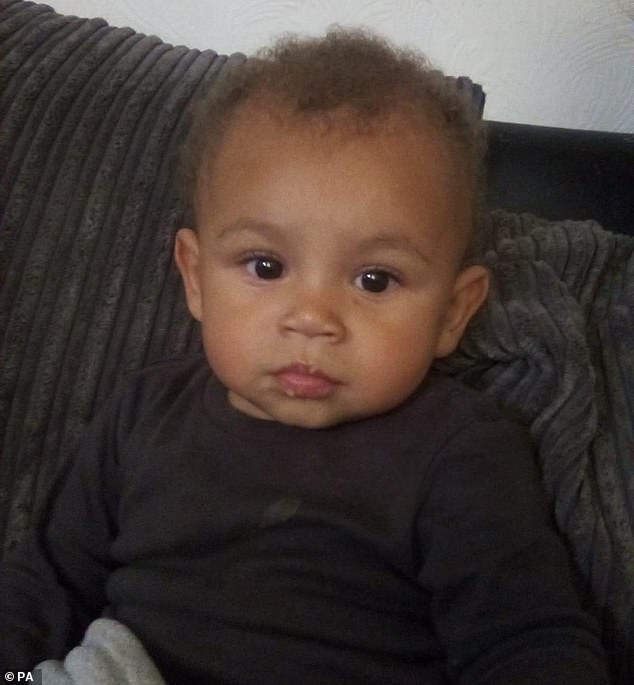 Zakari was pulled out of the River Irwell in Radcliffe, Greater Manchester, by firefighters after reports that a child was in the water shortly before 4.25pm on Wednesday

‘It’s hard to comprehend what has happened and that I will not get to see my baby grow up to be the handsome decent man I knew he would become’.

Tearful mourners left flowers, soft toys and candles on the bridge where Zakari was allegedly thrown from in Blackburn Street.

Among the tributes was a card which read: ‘To a beautiful little boy. Sleep tight little man,’ while another said ‘Goodnight and God Bless beautiful innocent boy. Fly high Angel.’

Earlier on Friday, Zakari’s father made his first appearance in court accused of the youngster’s murder.

Zak Eko, 22, of no fixed address, was brought from custody to Manchester Magistrates’ Court on Friday.

In a hearing lasting barely a minute, he was flanked by prison officers as he entered the dock and gave his name as Zak Bennett-Eko and confirmed his date of birth. 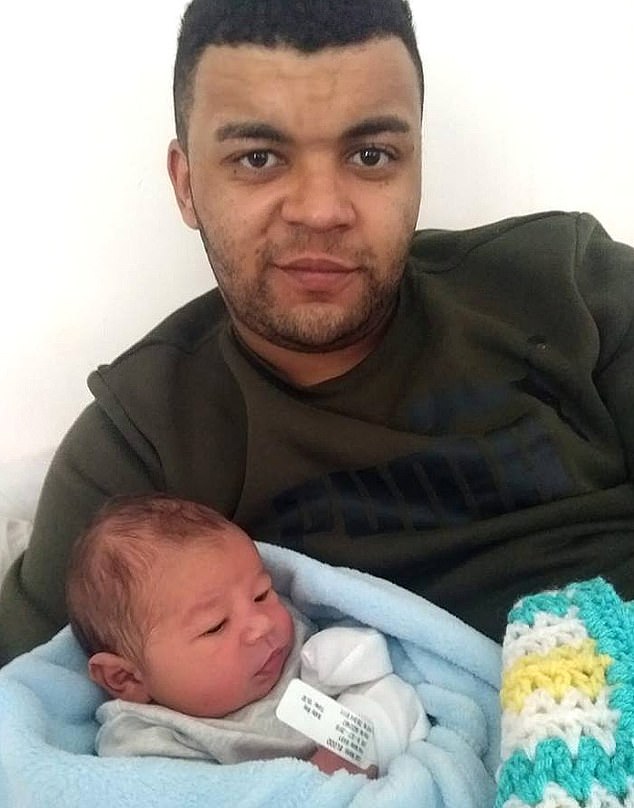 Zak (pictured with his son), 22, of no fixed address, was brought from custody to Manchester Magistrates’ Court on Friday 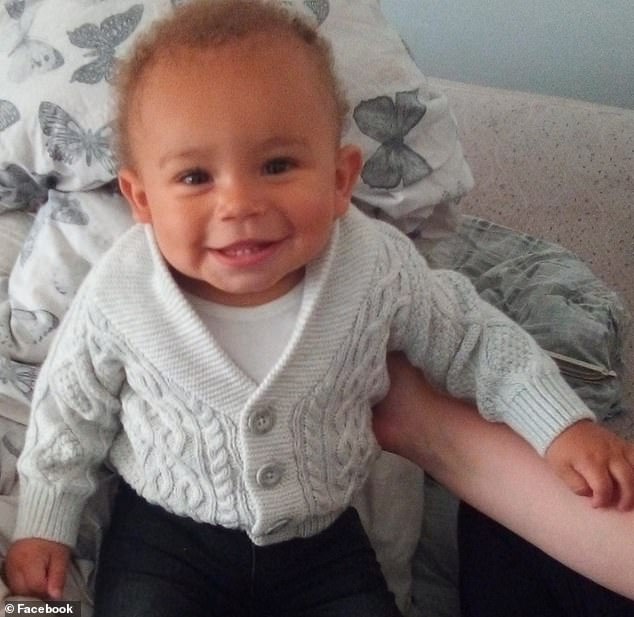 Zakari William Bennett-Eko was pulled out of the River Irwell in Radcliffe, Greater Manchester, by firefighters. He died later at hospital 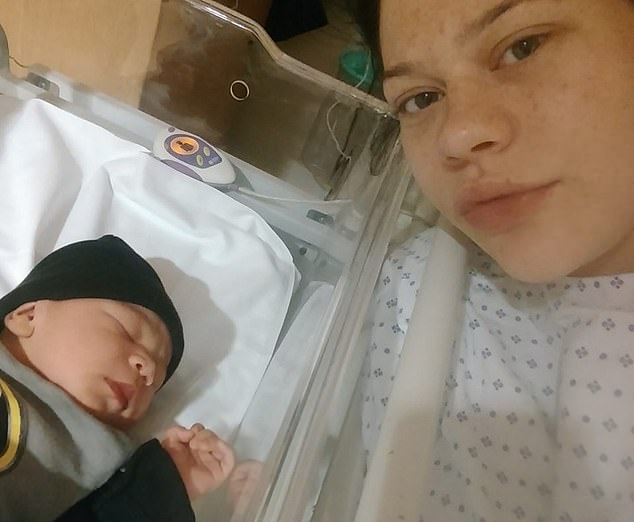 Emma Blood (pictured in hospital with her son) has posted an emotional statement on Facebook this morning after the death of her son Zakari, and wrote: ‘I love my little boy and did everything for him’

Eko, wearing a grey top and grey jogging bottoms, was told by Deputy District Judge Vincent McDade that the matter needed to be dealt with in a crown court.

The defendant was further remanded in custody and will next appear at Manchester Crown Court on Monday September 16.

This morning a JustGiving page set up to raise money for Zakari’s funeral had raised more than £4,000.

Yesterday the boy’s grief-stricken mother Emma Blood, 22, posted an emotional statement on Facebook yesterday morning, telling how she has ‘lost my son’ and said she ‘wished I was dead.’

Ms Blood wrote today: ‘I lost my baby today. I love my little boy and did everything for him.

‘I didn’t know my child was dead until I got to A&E.

‘We sat with him for hours, we held him, we kissed him and then I left. 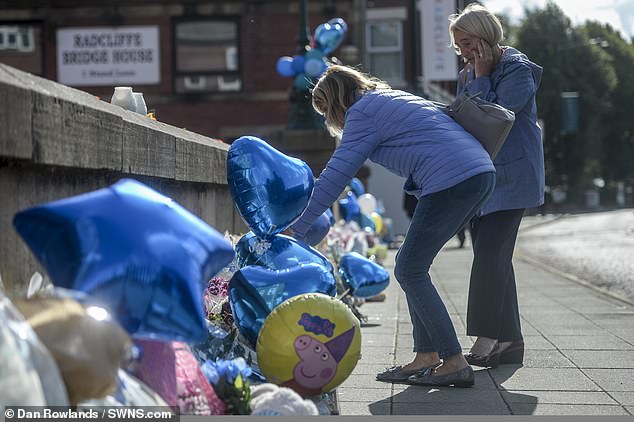 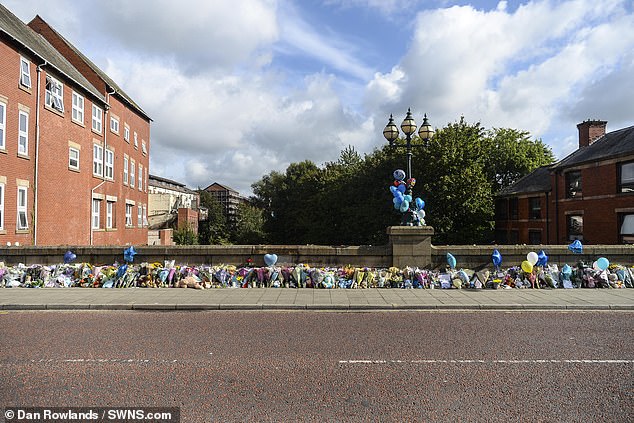 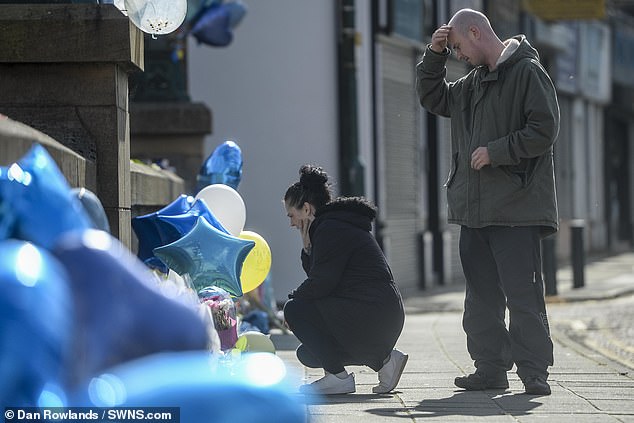 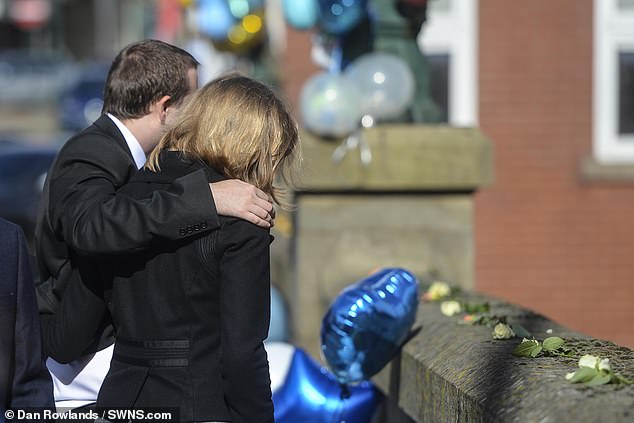 One witness told the Manchester Evening News: ‘It was a very small child in the river, I thought it was a doll when I saw it.

‘I thought someone was on the run.’

Neighbours also revealed yesterday that Ms Blood, the mother of the child, is believed to be around three or four months pregnant. 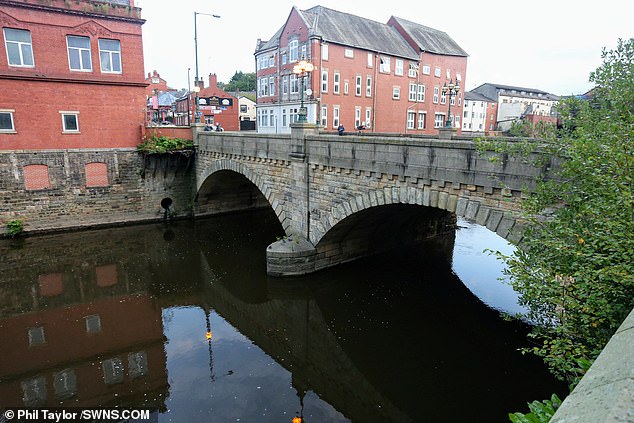 Paramedics battled to save the boy after he was pulled from the water, some 100 yards from the bridge (pictured) 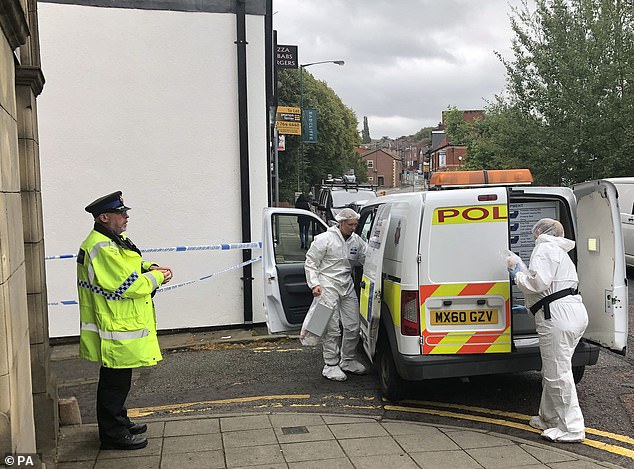 David Kavanagh, 67, told The Sun: ‘Emma and Zak seemed like a happy couple, she was a loving mother.

‘She was taking Zakari to playgroup and they were making plans for his first birthday.’

Tearful mourners, many who were mothers with young children, have left more than 100 bunches of flowers, soft toys and candles on the bridge.

Among the tributes was a large cuddly bear with a card that read: ‘To a beautiful little boy. Sleep tight little man. Our thoughts are with your family. From all of us at Lidl Radcliffe.’ 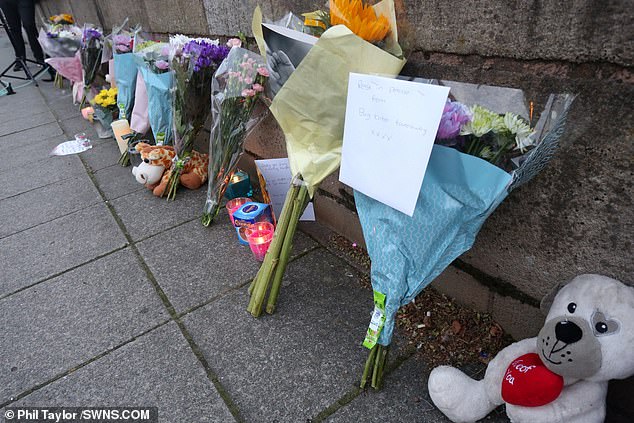 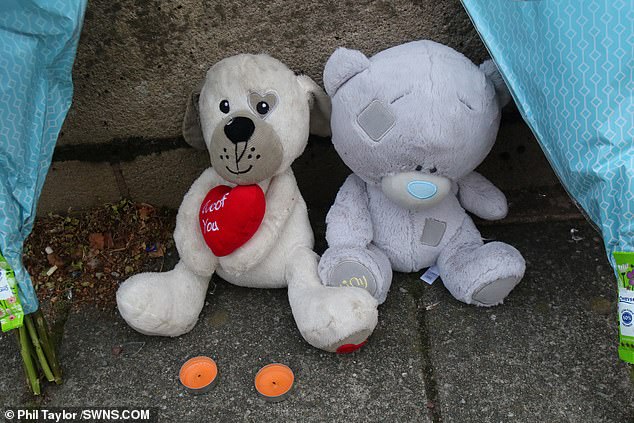 Two teddy bears have been left on the bridge, next to two candles 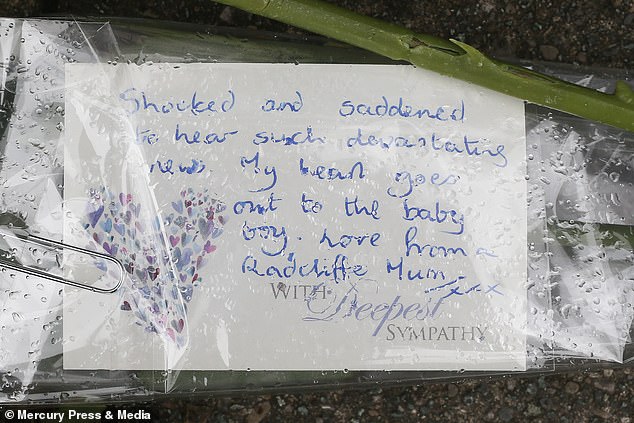 One of the many tributes left at the scene yesterday 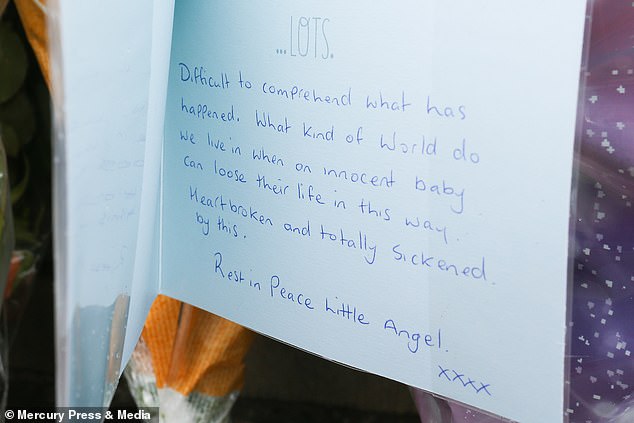 This card reads: ‘Difficult to comprehend what has happened. What kind of world do we live in when an innocent baby can lose their life in this way’

The boy’s maternal grandfather Andy Blood was too upset to comment as he visited the bridge. He left a card that read: ‘To my beautiful grandson. We love you so much RIP.’

His paternal grandfather Addy Eko wrote online: ‘Good blees little man still got your dummy here il bring it soon say hi to your sister and nana so sorry which it me not you.

Ms Blood’s Facebook page is packed with pictures of her son. She announced her pregnancy in February 2018, where she wrote on Facebook: ‘I honestly can not hold back anymore, we are over the moon that we are expecting a baby.’ 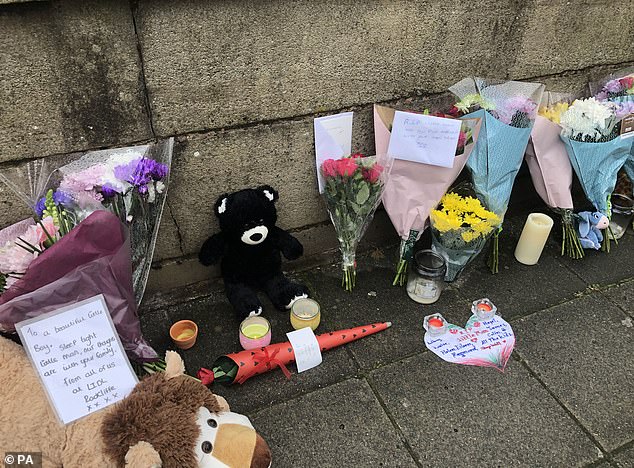 Among the tributes was a large cuddly bear with a card that read: ‘To a beautiful little boy. Sleep tight little man. Our thoughts are with your family. From all of us at Lidl Radcliffe’ 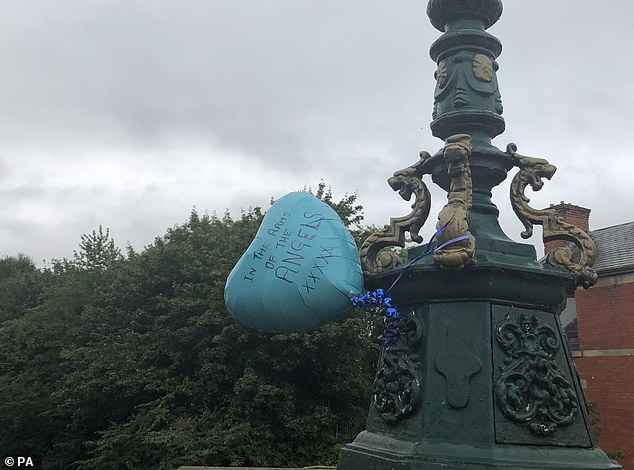 A balloon has been attached to the bridge in Radcliffe with a tribute that read: ‘In the arms of the angels’ 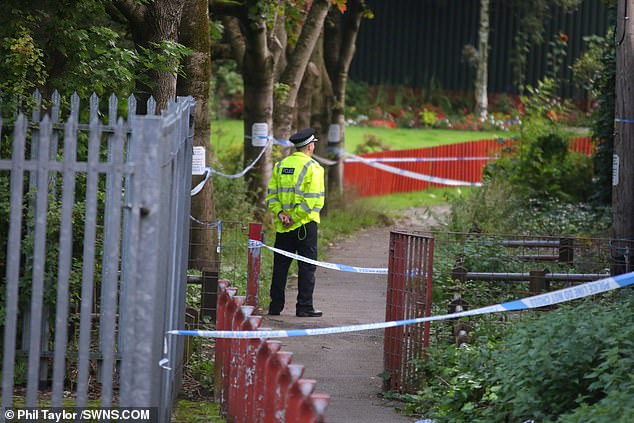 After her first scan she wrote: ‘Today we seen our little baba who has a very strong heartbeat, healthy and is perfect in every single way.

‘The past ten weeks have flown by it won’t be long until we meet you in person.’

In a selfie in hospital with her new son in October last year she wrote:  ‘He’s just so perfect and so good. He was worth every bit of pain. We love you Zakari.’ 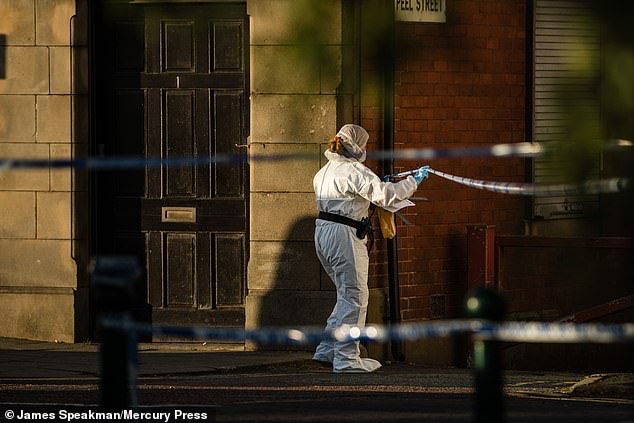 Greater Manchester Police said it was called to the scene shortly before 4.25pm on Wednesday 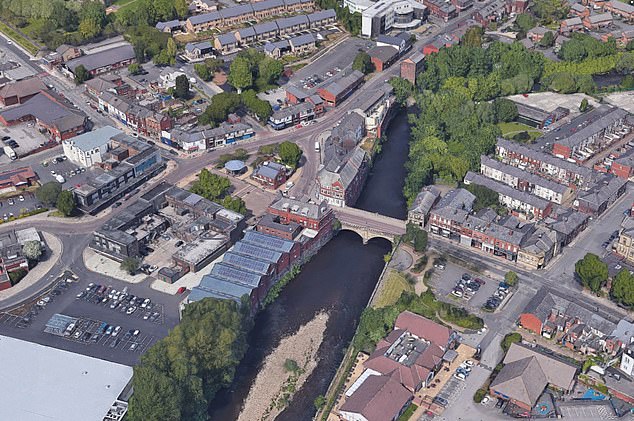 The boy was thrown off the Blackburn Street bridge and into the River Irwell in Radcliffe, Greater Manchester, it is claimed

Members of the community in Radcliffe have responded to the tragedy on social media, expressing their shock at the incident.

‘Worked in Radcliffe, know the area but this is just so utterly horrible.’

A JustGiving page has also been set up to help pay for the cost of the funeral.

Helen Coverdale, who set up the page, said: ‘I set the Just Giving page up last night.

‘Just being a mother, and being a human being, what happened absolutely shook me to my core.

‘I felt I needed and wanted to do something. If I am being honest I wanted to pick him up and give him a big hug.

‘When I heard he had passed away everybody was saying they wanted to do something to remember him, something like a headstone or flowers on the bridge.’

The 45-year-old, from Radcliffe, added: ‘The response has been amazing, within an hour it was £700.