A mother is facing backlash online after revealing she and her husband live in a camper with their five young children — but she insists it what’s works for their family.

Kat Elizabeth, a mom from Kansas, gave a tour of her impressive camper, including where her kids sleep, in a now-viral TikTok video, inadvertently sparking a debate about whether or not there is enough room for her family.

On the road: Kat Elizabeth and her husband Kyler live in a camper with their five children 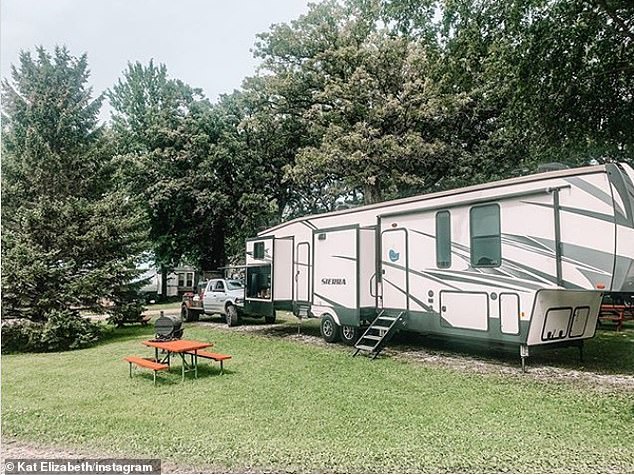 Kat Elizabeth, a mom from Kansas, gave a tour of her impressive camper, including where her kids sleep, in a now-viral TikTok video

The camper looks like any other family home, albeit a bit smaller. They have a large bathroom with a shower, a residential-size refrigerator, a washer and dryer, and an open living area across from the kitchen.

They even have an entryway table covered with festive fall decor.

Kat and her husband Kyler share one bedroom with their baby boy, who sleeps in a co-sleeper bassinet, while their four daughters sleep in another room.

Each child has their own bed, with two of the oldest children sleeping on top bunks. One little girl has a bottom bunk, and their youngest daughter sleeps in a travel crib. 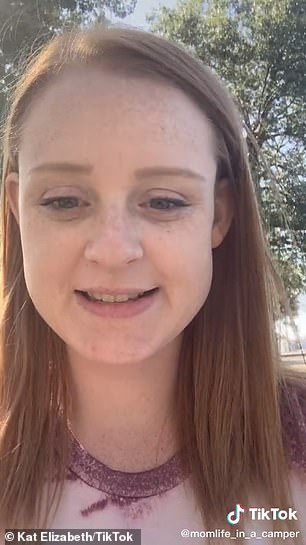 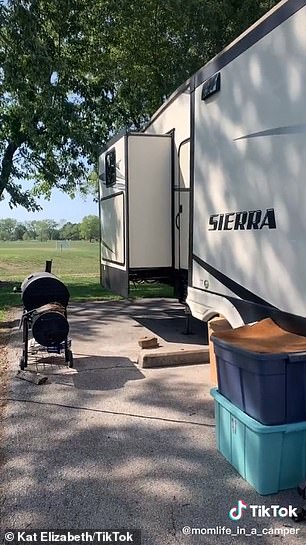 Going viral: Kat gave a tour of her impressive camper, including where her kids sleep, in a now-viral TikTok video 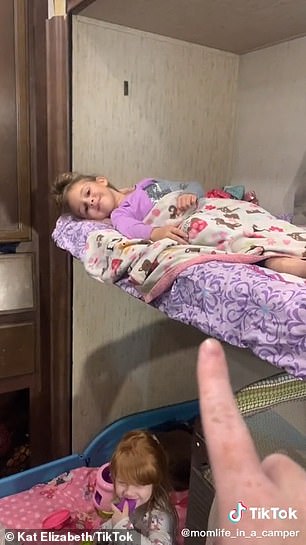 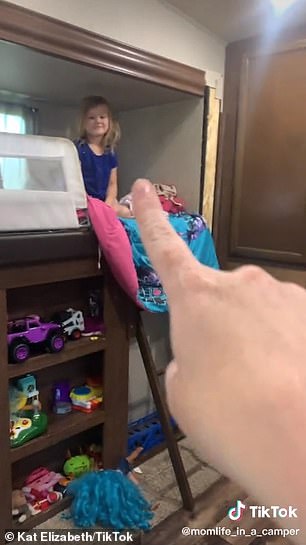 Making it work: The couple’s four eldest daughters all share a room together, with two sleeping on top bunks 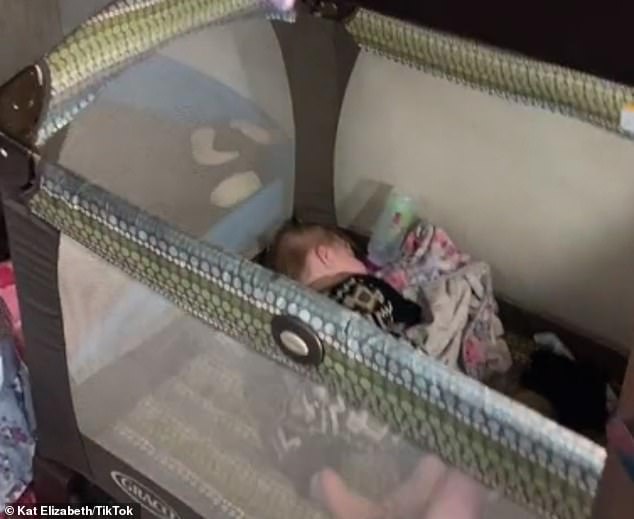 The girls even have their own bathroom to share, which many kids don’t have.

While Kat was merely giving a tour of her home, people felt compelled to comment on the size of their living space.

‘THAT is to [sic] small for them. On rainy days, storms, etc. You can survive but this is for you not them. I’m not even a hater. Just wrong,’ one person wrote.

‘We actually do it so they can see their dad every night, so it is for them,’ Kat hit back.

‘Okay but what about when they are older and want privacy or are they not entitled to that?’ someone else asked, insisting: ‘You have to have a certain amount of sq ft. for each child.’ 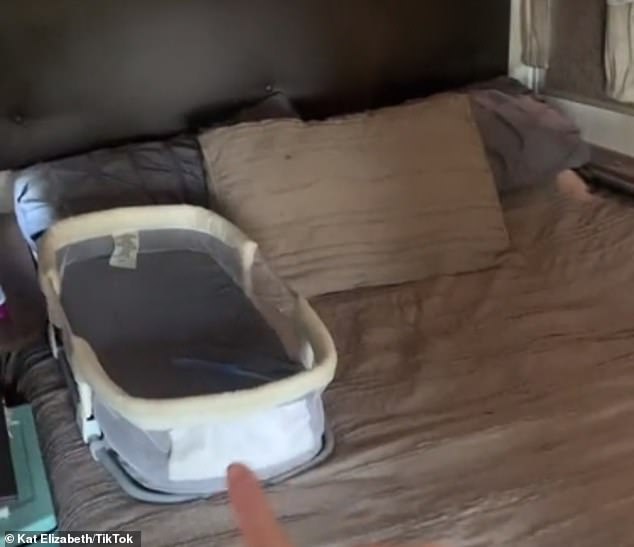 Other room: Kat and Kyler share one bedroom with their baby boy, who sleeps in a co-sleeper bassinet 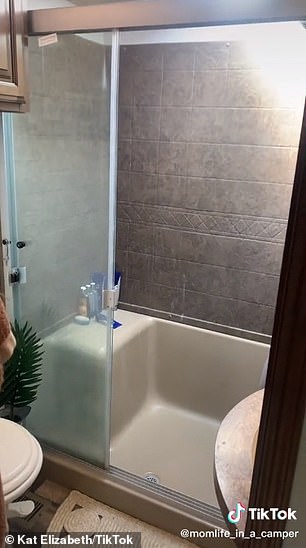 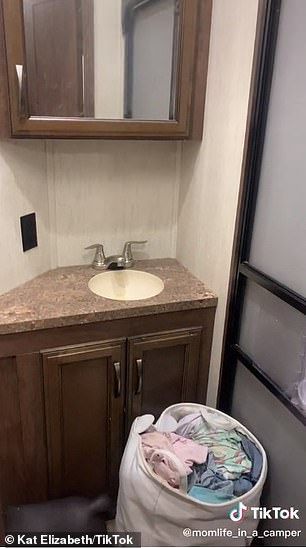 Amenities: They have two bathrooms in the camper, one with a large shower and one for their daughters to share 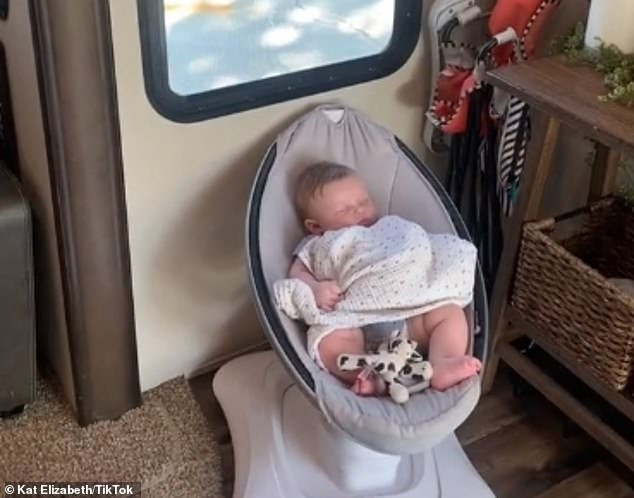 Peaceful: Kat’s baby boy slept soundly in the living area in the camper while she filmed the clip

However, others loved the family’s camper and praised her in the comments.

‘Heck yeah. No one said living in a traditional house is a must,’ one person shared. ‘The kids must love adventure. Screw anyone who says this isn’t ok for kids,’ one viewer shared.

‘I would actually love to live in there,’ someone else noted.

Kat responded to the criticism, including those who rudely told her to stop having children, claiming she couldn’t afford them.

‘Those with the no more kids comments,’ she wrote. ‘We ain’t broke. This lifestyle isn’t cheap and we CAN afford our kids.’

Debate: Critics claimed the livings space was ‘too small’ for her children, prompting her to defend herself. However, fans said they loved the camper

The mother of five also filmed a follow-up video, explaining that her husband Kyler is a pipeline welder, and they are living in a camper to keep their family together.

‘This is for all the people saying it’s not good for me to have that many kids in close quarters: To each their own,’ she said, adding that they are saving money to ‘buy a nice, big ranch’ in Kansas.

Kat told DailyMail.com via direct message on Instagram that Kyler has been traveling as a pipeline welder since they’ve been together.

‘I stayed home raising the kids, and we would get to see him maybe once a month if we were lucky. And it was hard on all of [us], really hard,’ she recalled.

‘We had just finished remodeling our two-story home, and I told him that I think living in a camper and traveling with him would be better for our marriage and for our kids to be able to see their dad every night.’ 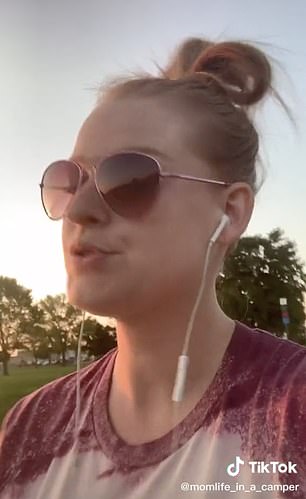 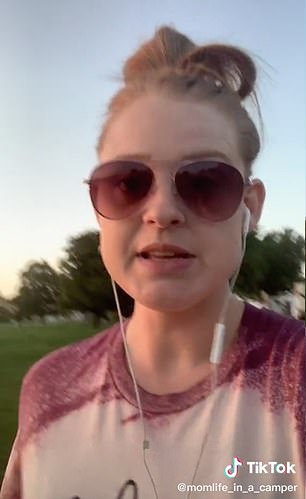 Just so you know: The mother of five also filmed a follow-up video, explaining that her husband Kyler is a pipeline welder, and they are living in a camper to keep their family together 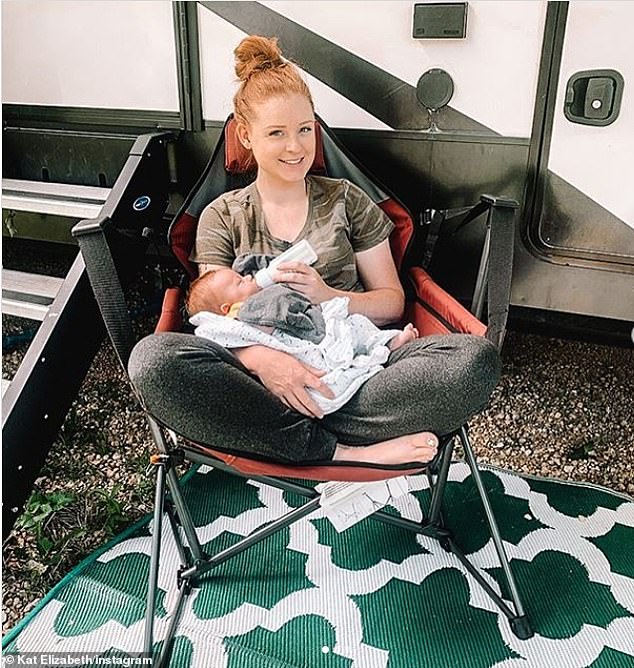 Perfect for them: Kat told DailyMail.com that they now get to see Kyler every night, show their children the country, and save money 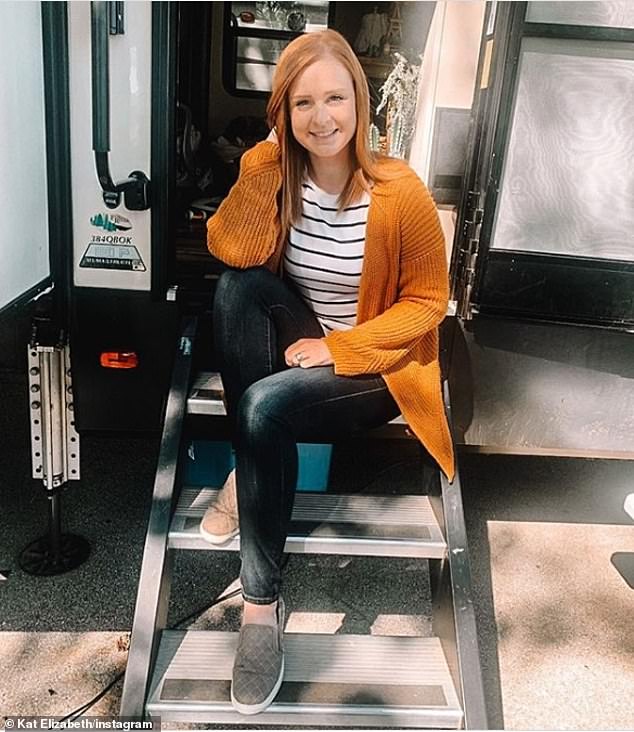 Shaking it off: ‘At the end of the day their opinions don’t bother me because I know what we did was the best thing for us,’ she said of the criticism

They purchased a camper in February 2019 and started traveling with him in May that year — two weeks after the birth of their fourth daughter. She was pregnant with their fifth child while on the road with her family.

Kat said they now get to see Kyler every night, show their children the country, and save money. They used to have to pay for their bills at home as well as Kyler’s hotel fees and groceries, but not anymore.

‘I also love being able to just pack up and go anywhere anytime and have everything we need right there,’ she said. ‘I personally would love to continue traveling as long as possible. We’ve seen a lot but there is still so much we want to see and do.’

When asked about the backlash, Kat said she didn’t take it to heart because she is confident in her decision.

‘I do believe a lot jumped to conclusions before knowing the reasoning behind it, but at the end of the day their opinions don’t bother me because I know what we did was the best thing for us,’ she said.