The debate about whether breast is best is age-old, but one mother has revealed a new breastfeeding debate taking place in her household – whether a child should be breastfed if their sibling wasn’t.

Taking to Mumsnet, the mother explained how her partner had told her that she should bottle-feed their new baby because it wasn’t ‘fair’ on their eldest son, who wasn’t breastfed.

Other parents were quick to take her side, describing her partner’s logic as ‘ridiculous’ and arguing there would be no impact on their eldest son.

But some admitted they could see where her partner was coming from, explaining how they had felt ‘guilty’ in the past when faced with a similar decision over whether to breastfeed a younger sibling.

A mother has revealed how her partner is refusing to let her breastfeed their second child, arguing it wouldn’t be ‘fair’ on their eldest (file photo) 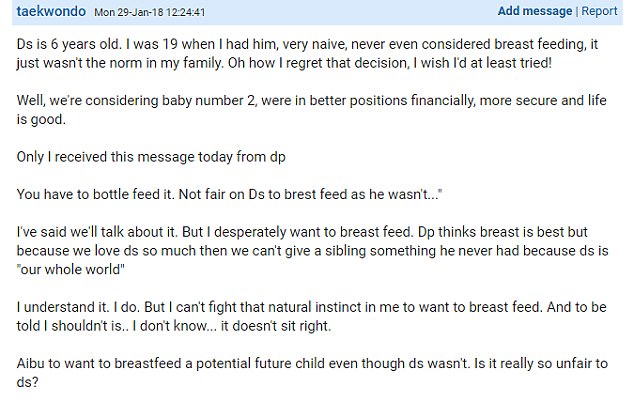 The Mumsnet user explained how she had regretted her decision not to breastfeed their son, who is now six

Posting under the username taekwondo, the mother explained: ‘DS[Darling son] is 6 years old. I was 19 when I had him, very naive, never even considered breast feeding, it just wasn’t the norm in my family. Oh how I regret that decision, I wish I’d at least tried!

‘Only I received this message today from dp[darling partner]. “You have to bottle feed it. Not fair on Ds to breastfeed as he wasn’t…”‘

She continued: ‘I’ve said we’ll talk about it. But I desperately want to breast feed. Dp thinks breast is best but because we love ds so much then we can’t give a sibling something he never had because ds is “our whole world”.’ 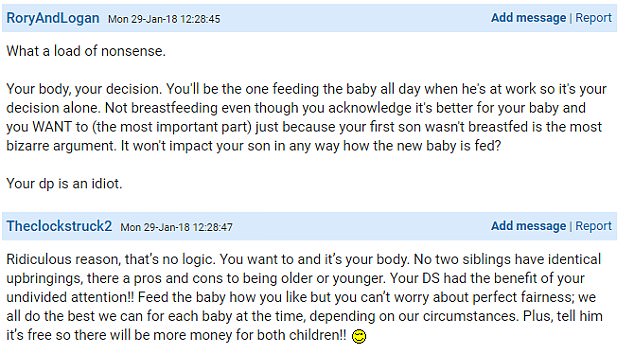 Other her side, describing her partner’s stance as ‘ridiculous’

Other members of the parenting fory

Other parents on the forum took her side, describing her partner’s stance as ‘ridiculous’

Other parents were quick to take her side, describing her partner’s stance as ‘ridiculous’

Some suggested that it should be her decision ultimately, with one mother declaring that no one would stop her breastfeeding her own child

Many mothers disagreed with her partner’s stance, arguing that whether or not she breastfed their second child had any effect on their son.

One wrote: ‘What load of of nonsense. Your body, your decision…It won’t impact your son in any way how the new baby is fed.’

Another added: ‘How bizarre. Tell him that all any parent can do for their children is offer them the best we can with the information we have at the time.

Other suggested that her partner’s reaction to the idea of her breastfeeding their new baby sounded like he was being ‘controlling’. 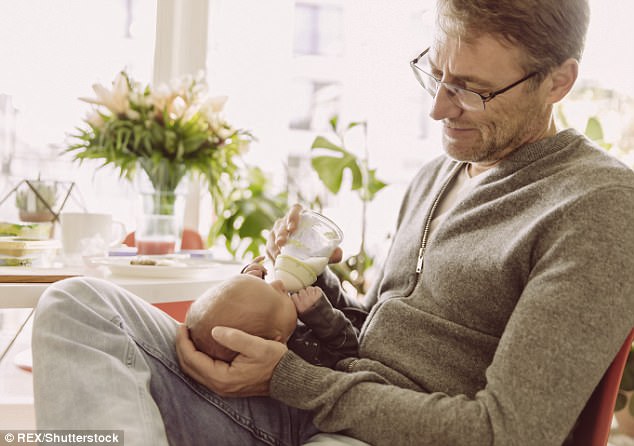 According to the mother, her partner did agree that ‘breast was best’ but believed they couldn’t give their new baby something his or her sibling didn’t get (file photo)

One suggested she could give some of her breast milk to their son, while others argued there would be no impact on their eldest child either way

However, others had more sympathy with his position, describing how they had faced similar dilemmas in the past.

One mother explained how she had breastfed her eldest daughter, but ended up breastfeeding her younger sibling because they were twins.

‘I did feel guilty about them not having had the same start as [darling daughter 1] but was determined not to dwell on it,’ she explained.

However, other Mumsnet users were more sympathetic towards her partner’s stance

One mother described how she had hoped to breastfeed her twins, but ended up bottle-feeding them – whereas she’d breastfed her eldest daughter