Pigtail hour! Mother goes viral with mouth-watering Percy Pig cocktail recipe that you can recreate at home with just four ingredients – including milk and vodka

A Londoner has shared her delicious Percy Pig cocktail recipe, paying homage to the popular Marks and Spencer sweet.

Gemma Keen shared the recipe, which only takes four ingredients to make and can easily be recreated at home.

The drink, which looks like a milkshake, is based around the M&S Percy Pig ice-cream and is perfect for fans of the piggy-shaped candy.

Gemma shared her recipe on the Extreme Couponing and Bargains UK Facebook group, where thousands said they would have try the cocktails for themselves.

Gemma said fans of Percy Pig were sure to like this cocktail, made of ice-cream, two types of alcohol and milk.

Gemma Keen, from London, shared her mouth-watering recipe to a Percy Pig cocktail on social media

Excited Percy Pig fans were thrilled to learn of the recipe, with many saying they would try it at home

Gemma reveaeld she used two shots of tequila rose, mixed with two scoops of Percy Pig ice-cream and milk to obtain the mixture.

She said you could add a shot of vodka if you like your cocktails stronger, but that it was only optional.

However, she revealed that  vanilla and strawberry ice-cream works just as well if you cannot not find the Percy Pig at your local M&S.

She mixed the lot with a handful of ice-cubes before pouring it into a cocktail glass. 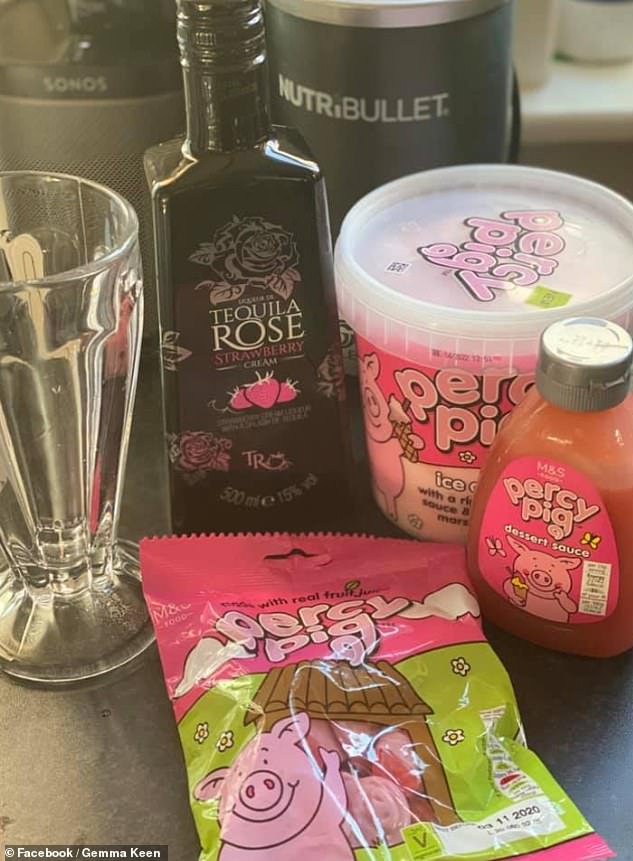 The easy to make cocktail requires four main ingredients: Percy Pig Ice-cream, milk, tequila rose and an optional shot of vodka if you like it strong

How to make a Percy Pig cocktail

Gemma revealed she even used some Percy Pig-flavoured syrup to line her drink.

She added whipped cream in order to decorate the glass, as well as an actual Percy pig sweet, delicately propped on top of her drink, before sprinkling it with edible glitter.

Fans of the popular candy were thrilled with the idea, and many vowed to try it.

‘Omg that’s my diet down the drainnnnnnn,’ one joked.

‘We have been eating Percy Pigs wrong,’ said another. 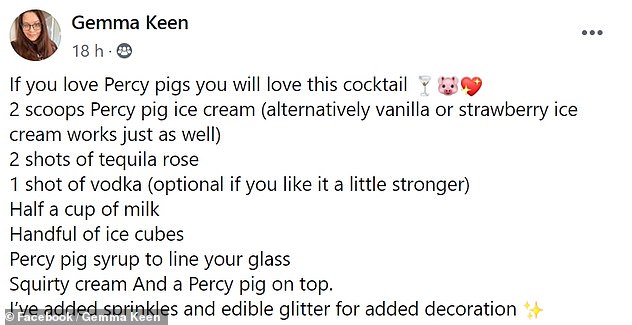 ‘I did not know they had done that. Absolute game changer,’ wrote one.

Some were also very excited to learn that Percy pig ice-cream had become available.

‘Never mind the cocktail I need some Percy pig ice cream,’ one said.

Fans of the M&S candy were excited to try the cocktail, with some joking they had been eating Percy Pigs wrong