Mother slams Facebook after photo of toddler is banned

A furious mother has hit out at Facebook after it banned a photo of her one-year-old daughter, who suffers from a rare condition that causes her to break out in blisters at the slightest touch.

Rhiannon Atkinson, 30, tried to advertise pictures of Pippa’s blistered feet to raise awareness of epidermolysis bullosa (EB) – which strikes one in 50,000 people.

But she claims the social media giant sent her a message branding the images of her daughter, who is left in unbearable pain due to the condition, as ‘undesirable’.

Facebook told Mrs Atkinson, who can’t cuddle or even hold her daughter’s hands, that such pictures are banned because they make users ‘feel bad about themselves’.

The image showed the extent of Pippa’s condition – around 90 per cent of her hands and feet are without skin and red raw.

Mrs Atkinson has previously spoken about how she has to restrain Pippa when she dresses her in bandages to stop her catching any deadly infections. She finds it upsetting as it goes against her motherly ‘instinct’.

Rhiannon Atkinson, 30, tried to advertise pictures of Pippa’s blistered feet to raise awareness of epidermolysis bullosa (EB) – which strikes one in 50,000 people

Mrs Atkinson, from Cwmbran, South Wales, said: ‘I went back to them [Facebook] to say that’s ludicrous and that we were trying to highlight my daughter’s condition.

‘Even after they reviewed it they were still not willing to change their minds.

‘People have told us the images make them feel sick – that’s fine some people have nothing better to do than pick on a baby.

‘But for a huge corporation to say that – that stunned me.’

Facebook said that the image Mrs Atkinson was trying to use ‘depicts a body or body parts in an undesirable manner’.

It also said that adverts should not depict certain body weights as being ‘perfect’, or any health conditions as being ‘extremely undesirable’.

As examples, it used ‘close-ups of “muffin tops”, where the overhanging fat is visible’, people with tight clothes and conditions painted ‘in a negative light’.

It also said that ‘adverts like these are not allowed since they make viewers feel bad about themselves’.

Facebook were contacted but did not respond at the time of writing. 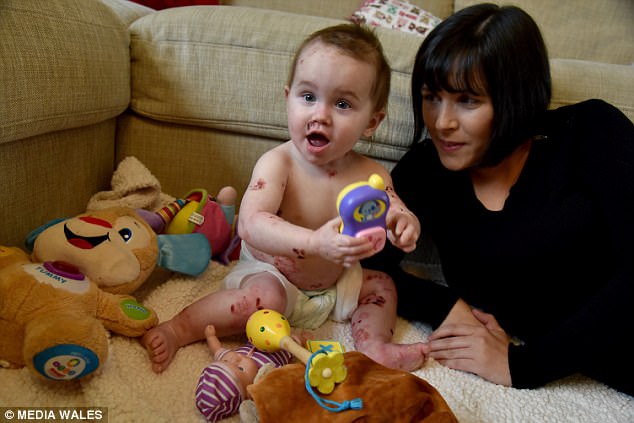 But she claims the social media giant sent her a message branding her daughter, who is left in unbearable pain due to the condition, as ‘undesirable’ 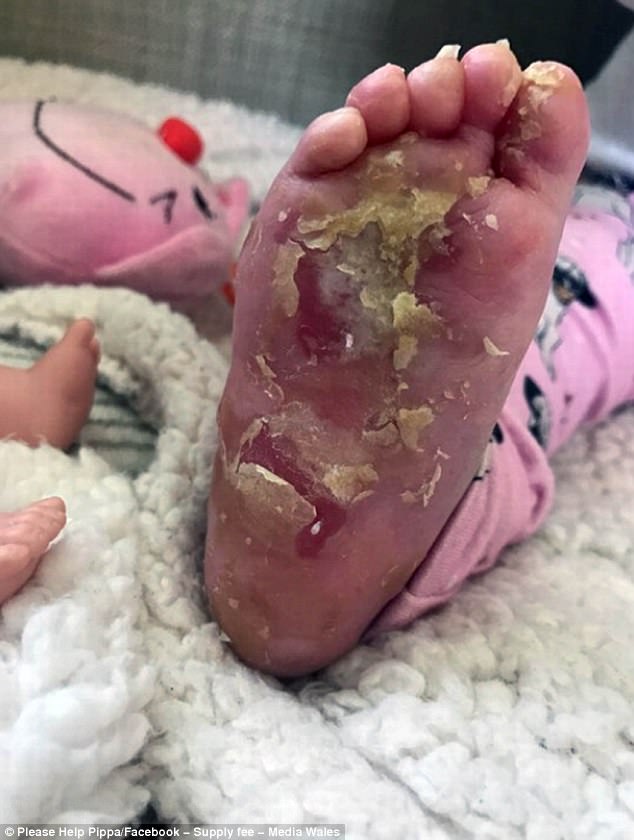 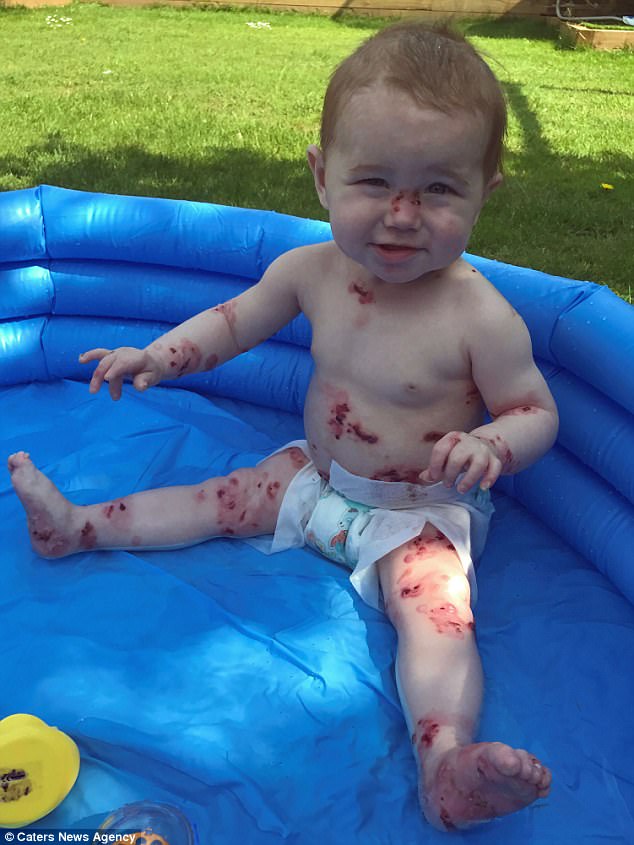 The image showed the extent of Pippa’s condition, as around 90 per cent of her hands and feet are without skin and red raw. She blisters at the slightest touch

Epidermolysis bullosa (EB) is a general term used to describe a group of rare inherited skin disorders that cause the skin to become very fragile.

The skin is missing type VII collagen – a protein that usually binds the top layer of skin to the bottom layers.

Any trauma or friction to the skin can cause painful blisters. In most cases, the symptoms of EB are obvious from birth.

It is caused by faulty genes inherited from one or both parents. There are many cases when both parents are carriers of the faulty gene without realizing it.

There is no cure for EB so the treatment aims at preventing blisters becoming infected.

‘It’s caused by an abnormalities in the building blocks of the skin, which means the skin is less able to withstand friction. Depending on the protein affected, EB varies enormously in severity.

‘Some types are life-threatening whilst some types can be relatively mild- albeit very uncomfortable.’

Pippa gets 50-60 blisters a day. She has to have nappies lined to stop them rubbing and numerous different creams applied in an attempt to reduce friction.

As she grows, and develops the urges to crawl and walk, her hands, knees and feet constantly have to be bandaged, Mrs Atkinson said.

Pippa takes morphine and paracetamol to cope with the pain. Some days she needs sedatives to relieve her.

A nurse and carer rolled into one

Mrs Atkinson said: ‘I am Pippa’s nurse and carer all rolled into one. In some ways when I am dressing her she must hate me because I am causing her so much pain.

‘But on the other hand, if she’s upset, I’m the person she looks for.

‘I dread the day when she can tell me to stop doing something because you always have to get her dressings finished.’

Mrs Atkinson, speaking last month, said: ‘As soon as she was born her hands and feet looked as though someone had taken her and dipped her in boiling water.

‘They were red raw and she was whisked off to intensive care.

‘Being told your child has an incurable condition is incomprehensible, it broke my heart.

‘But then not being able to touch her, or cuddle her for five months was torture.

‘I’d never known anyone with this condition so it was a complete shock when we were told it was going to get worse.’ 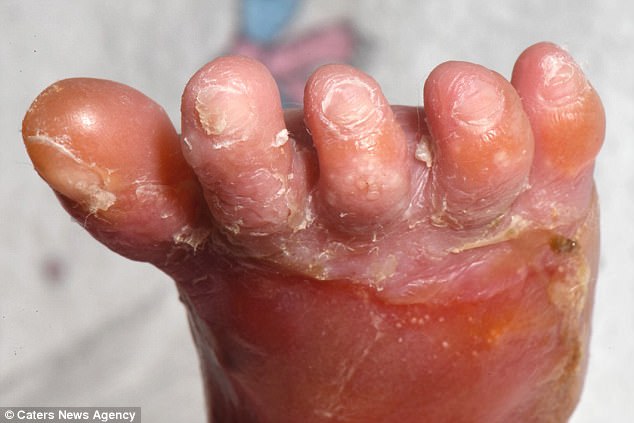 Mrs Atkinson, from Cwmbran, South Wales, said: ‘I went back to them to say that’s ludicrous and that we were trying to highlight my daughter’s condition’

Mrs Atkinson stayed with Pippa and husband, Damian, 36, in hospital for 23 days as nurses decided to best plan of aftercare for their baby.

Once she was discharged from hospital, Pippa had to have her hands permanently bandaged for four months, and her feet bandaged for almost nine months.

Mrs Atkinson added: ‘When she was born I couldn’t hold her for five months, she was always on a pillow.

‘Not being able to cuddle your new-born baby is the worst feeling in the world but it would have caused her too much pain.

‘When we would touch her, especially her hands and feet, she would scream out in pain and you could see the true agony on her face.’

Bandaged up each day

In hospital, Mrs Atkinson had to bandage her daughter’s hands and feet four times each day. She was trained by specialist nurses.

She now knows how to bandage and clean Pippa’s skin thoroughly in the comfort of her own home to reduce her risk of infection.

It’s not the first time Facebook has sparked outrage from banning pictures.

In 2015, a photographer saw her photo of breastfeeding women yanked from the social media site after a chorus of male detractors reported them as obscene.

Jade Beall, who’s been photographing the female form for 15 years, says she posted her shot of seven nude women with their nipples and genitals blurred.

And in July this year, a campaigner organising a menopause support workshop slammed the social media giant after her advert was banned for being an ‘adult product’.

Diane Danzebrink, 50, applied to post an advert in an attempt to help women struggling with hormonal changes.

It was rejected but Ms Danzebrink’s surprise turned to horror when she saw the message that accompanied it, which took issue with the word ‘libido’ – despite it not being used in the ad.

Certain posts, which are deemed disturbing, are banned from the social media site, which has an age restriction of 13.

But in May it was revealed that Facebook is allowing users to share death threats, videos of self-harm and pictures of animal torture.

The manuals also say videos of abortions are allowed as long as there is no nudity and livestream attempts to self-harm won’t be stopped because it ‘doesn’t want to censor or punish people in distress’.

And moderators do not have to censor death threats as long as they are regarded as generic or ‘not credible’. 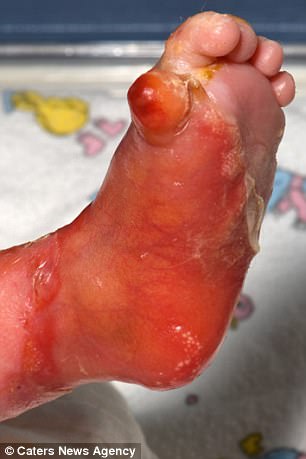 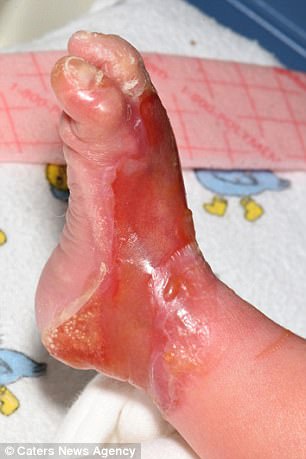 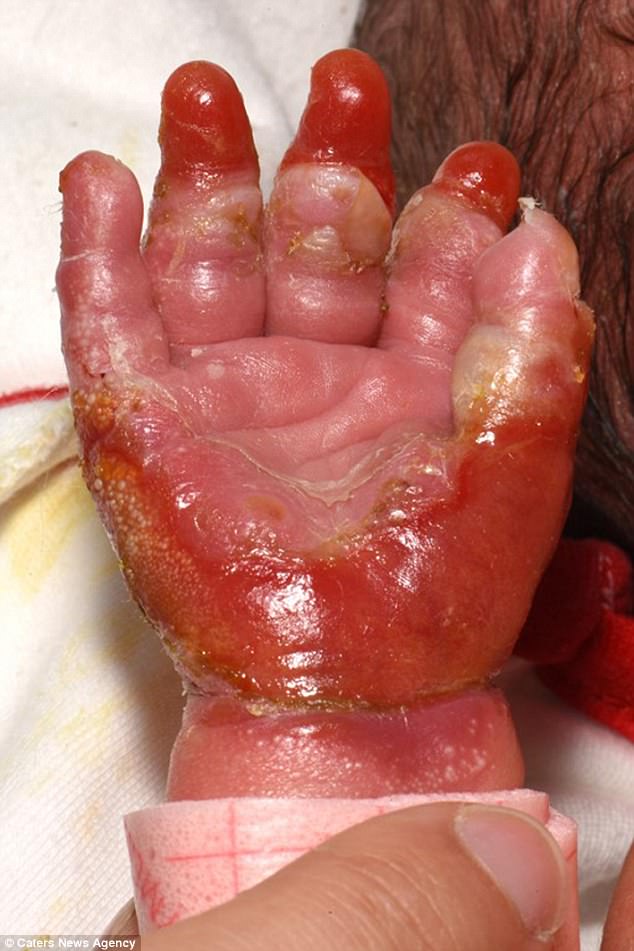 Mrs Atkinson added: ‘Being told your child has an incurable condition is incomprehensible, it broke my heart’ 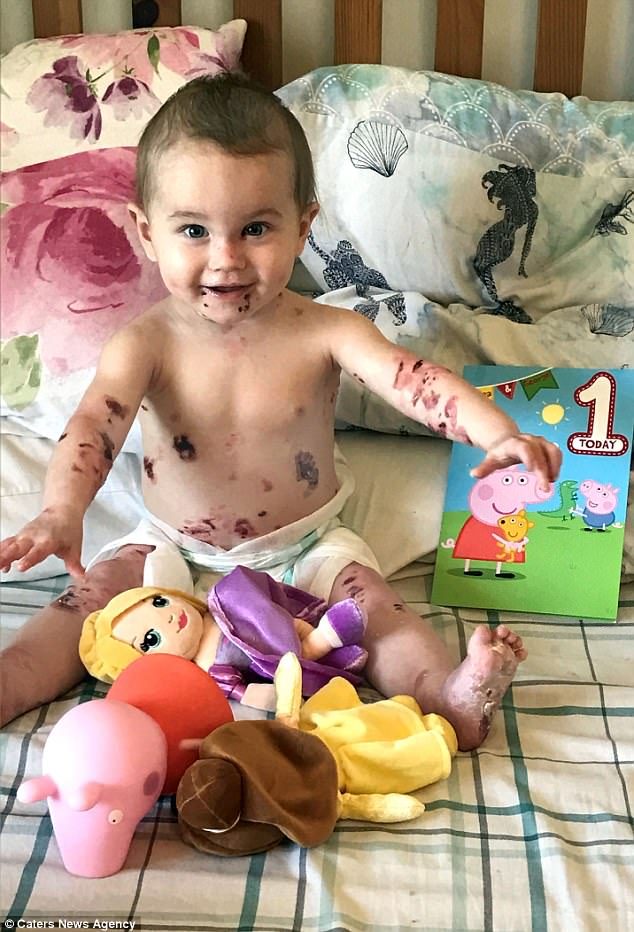 Mrs Atkinson said: ‘As soon as she was born her hands and feet looked as though someone had taken her and dipped her in boiling water’ 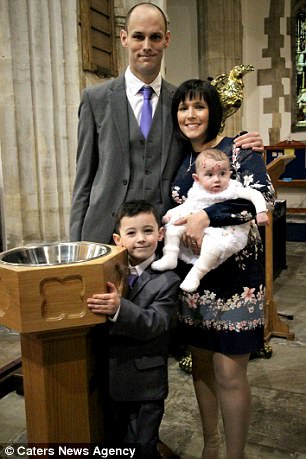 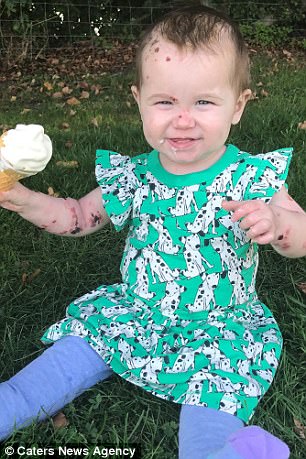 Mrs Atkinson stayed with Pippa and husband, Damian, 36, in hospital for 23 days as nurses decided the best plan of aftercare for their baby

Mrs Atkinson said: ‘She now has blisters on every inch of her body – on her eyelids, in her hair, her mouth and up her nose.

‘So we have to clean the house at least 10 times a day, because if dirt gets into her blisters it can cause infection.

‘Whenever she gets a blister me and Damian have to restrain her so that we can get the fluid out of her skin.

‘That goes against every natural instinct in your body – having to hold your baby down and know that you’re hurting them.’

Alongside all of the maintenance that the family have to endure to keep Pippa safe, it is also a struggle to let her do simple day-to-day things.

Mrs Atkinson said: ‘For months she could only wear her clothes inside out, as the seams caused her to blister.’

Now she has clothes which are custom-made without seams. Every day Pippa has full dressing changes. These can last up to two hours.

Her blisters are lanced with scissors, dead skin and scabs softened to remove them without damaging new skin underneath. 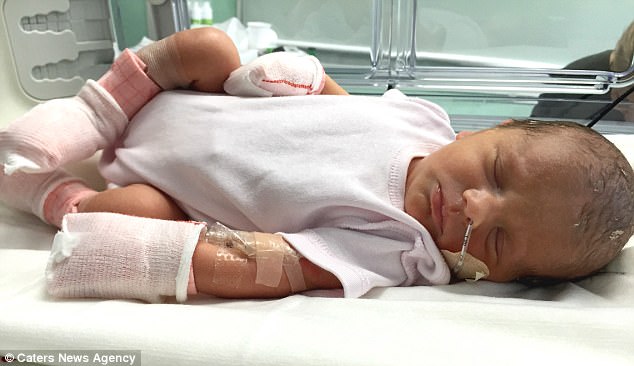 Once she was discharged from hospital, Pippa had to have her hands permanently bandaged for four months, and her feet bandaged for almost nine months 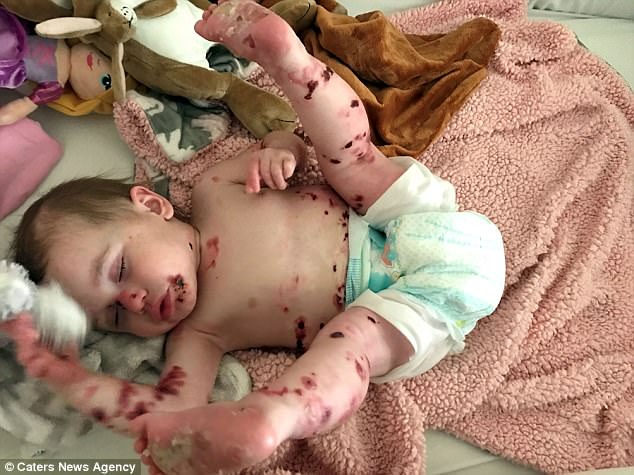 Mrs Atkinson, who gave up her banking job to care for Pippa, said: ‘She is now nearly 14 months old and hasn’t started to crawl or walk yet’

Mrs Atkinson, who gave up her banking job to care for Pippa, said: ‘She is now nearly 14 months old and hasn’t started to crawl or walk yet.

‘Because of her blisters the pressure on her knees or feet would cause too much pain.

‘Every normal process takes ages too – it takes over 20 minutes to change her nappy because of all of her creams and lotions and 45 minutes to have a quick bath because we’ve got to get all of the scabs off of her.

‘I have to change her clothes six times a day too, because her skin bleeds so easily.

‘She wakes up at least four times every night screaming out in pain because she’s moved and hurt a blister or touched her skin in her sleep.’

Her condition is slowly improving

Despite Pippa’s condition covering her whole body, Mrs Atkinson has noticed that she is slowly getting better.

Mrs Atkinson, who is now trying to raise awareness of the condition, added: ‘Luckily, we can cuddle her every day now as her EB has slightly improved.

‘Because Pippa’s condition is genetic, I’ll never have any more children just because of the risk.

‘I wouldn’t change her for the world and we are doing everything in our power to ensure she leads a long and happy life.’

Earlier this year Pippa fought off Streptococcal A which can cause meningitis. She is battling that again at the moment, along with Streptococcal G.

Pippa’s family are now raising money to build a one-bedroom specialist extension to make looking after the toddler easier.

If you would like to donate towards Pippa’s cause you can do so via their Just Giving page.