Having just diagnosed their toddler daughter Amy May with an allergy to nuts, the consultant was emphatic with his advice to Sue and Roger Shead.

He said: ‘Don’t just tell people she has a nut allergy — say if she eats anything that contains nuts, she could die,’ so that’s what we always did without fail,’ says Sue.

It was advice that Roger, Sue and, as she grew up, Amy May herself, followed to the letter. Which is why what happened to Amy May during a holiday to Budapest in 2014 pains the couple from Essex so much.

Now 29, Amy May almost died after eating a mouthful of a chicken dish while on holiday. She was served the meal that contained nuts despite showing the waiter a card in Hungarian stating she had a severe nut allergy, and asking him three times if there were nuts in the dish.

Her reaction was so severe that she went into cardiac arrest, despite using two EpiPens, (a self-injector that delivers a shot of adrenaline to help reduce severe allergy symptoms) and was left brain damaged.

‘There must have been quite a lot of nut in the dish because, according to the friends with her at the time, her throat started to tighten after just one mouthful,’ Sue told Good Health.

Amy May, who once had a promising career as a producer on ITV’s This Morning, now needs 24-hour care. 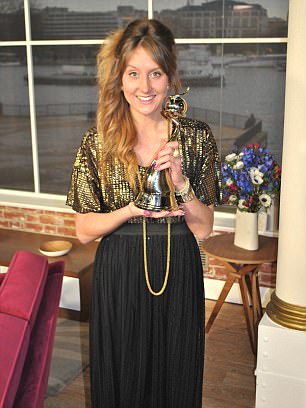 Pictured: Amy May with a National television award before her devastating reaction

The family are soon to move to a specially converted house and Sue, 62, and Roger, 69, who have had to give up their estate agency to help care for Amy May, remain angry at what happened.

‘I can’t find words to describe how horrific this is,’ Sue says. ‘This young woman has been robbed of everything. And it was totally avoidable.’

It wasn’t the first time that Amy May had unwittingly been served nuts. When she was 12, she had a reaction after eating tomato soup at a London hotel. This was despite her parents warning the waiter of the severity of her allergy.

Amy May’s throat started to tighten over the next hour and an ambulance was called. By the time she got to A&E, she was turning blue through lack of oxygen and had to stay in hospital overnight.

‘It turned out that the chef had put a dessert spoon of pine nut pesto in his vat of soup,’ says Sue. ‘The amount in her little bowl would have been minuscule, but even so, Amy May nearly died.’

An allergic reaction occurs when the immune system overreacts to a substance that it wrongly perceives as a threat — be that food, pollen, animal fur, or bee and wasp stings. In mild cases, this can trigger symptoms such as sneezing and an itchy rash.

Severe cases — anaphylaxis — are potentially life-threatening. Symptoms can include swelling of the face, mouth and airways, difficulty breathing and a drop in blood pressure. There are seven million people in the UK with a severe or complex allergy that requires specialist care. 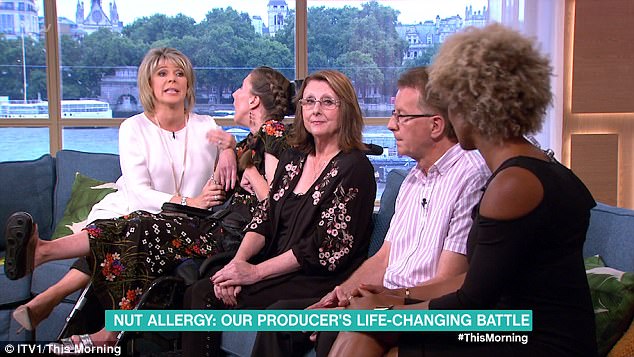 According to an Allergy UK survey of 2,000 adults, 44 per cent of severe allergy sufferers live in fear of having a potentially fatal reaction. And 82 per cent worry about going on holiday, because of fears that their allergies won’t be properly accommodated.

Part of the problem, says the charity, is that many are unaware of how serious allergies can be. According to their survey almost half of the public have no idea what anaphylaxis even is.

‘There is a concerning lack of awareness of this potentially fatal condition,’ says Lindsey McManus, the charity’s deputy CEO. ‘Thousands are admitted to hospital every year and the number of sufferers is soaring.’

Earlier this year, it emerged that hospital admissions for allergic reactions have risen by 30 per cent in the past five years, to more than 32,000, according to NHS Digital.

Yet some experts say the issue is still trivialised. ‘Many people use the word ‘allergic’ flippantly — they’ll say they are allergic to mushrooms when they don’t like them, which doesn’t help,’ says Maureen Jenkins, a specialist nurse consultant with Allergy UK. 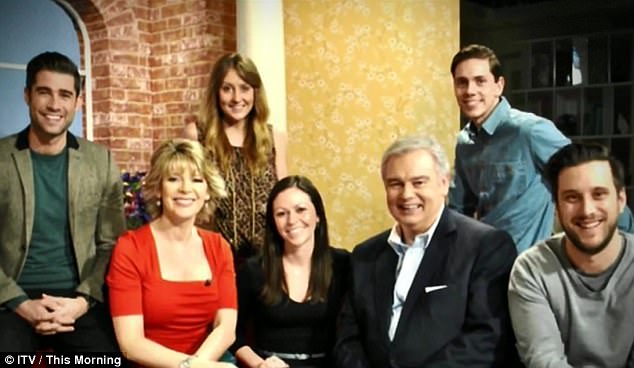 Amy May (back centre, pictured while working on ITV) had such a severe reaction that she went into cardiac arrest, despite using two EpiPens, (a self-injector that delivers a shot of adrenaline to help reduce severe allergy symptoms) and was left brain damaged

Others warn allergies are often wrongly bracketed with ‘faddy food diets’ and self-diagnosed food intolerances, and so genuine allergies are not seen as significant.

‘There is a lack of understanding about the difference,’ says Moira Austin, of the charity Anaphylaxis Campaign. ‘It is not helped by celebrities saying they are allergic to wheat when, in fact, it simply makes them feel bloated.’

WHY EPIPENS AREN’T A MAGIC CURE

Around 250,000 people in Britain carry an auto-injector that delivers adrenaline, such as an EpiPen. It does not halt anaphylaxis (a severe reaction) fully, but buys time to get medical help.

It must be stabbed in the thigh immediately and an ambulance has to be called. Once in the muscle, the adrenaline can enter the blood, taking effect within five minutes to relax narrowed airways. But it only gives a small dose — in potentially fatal reactions often a far larger one is needed.

After a European Medicines Agency review, doctors’ guidance now recommends the prescription of two auto-injectors. The second is to be used five to 15 minutes later if there is no improvement. Needle length is also to be stated after fears some were too short for overweight patients.

Wedding co-ordinator Penny Watson, 24, was diagnosed with nut allergies aged one after biting into her father’s peanut butter sandwich. It sent her into anaphylactic shock — causing her airways to close and blood pressure to drop — and she had to be rushed to A&E where she was given adrenaline to open up the airways and increase her blood pressure.

Ever since, Penny has carried an adrenaline pen and her family and close friends are on high alert for the symptoms (swelling of the face and lips, wheezing and a rash) and have been taught how to administer the treatment.

Yet Penny finds that many people — including restaurant, transport and even NHS staff — don’t take it seriously. ‘I can go into a restaurant, tell them I have a nut allergy, and still they bring peanuts to the table,’ says Penny, who lives in Somerset.

‘Last time I went to my local hospital to get a new adrenaline pen, not only did the nurse not know how to use it, but she told me she had just eaten a packet of peanuts.’ If someone has a severe peanut allergy, contact with even traces of the nuts — for example, on someone else’s hands — may be enough to trigger a reaction.

‘You worry whether you can trust that a product is truly nut free,’ says Penny. ‘I can’t even risk peanut traces, so there are lots of foods I can’t eat, such as cereal, chocolate and bread.’

The lack of importance given to allergies is mirrored by a lack of investment in allergy services in this country. The NHS has the equivalent of just 40 full-time allergy specialists, lagging behind other European countries. 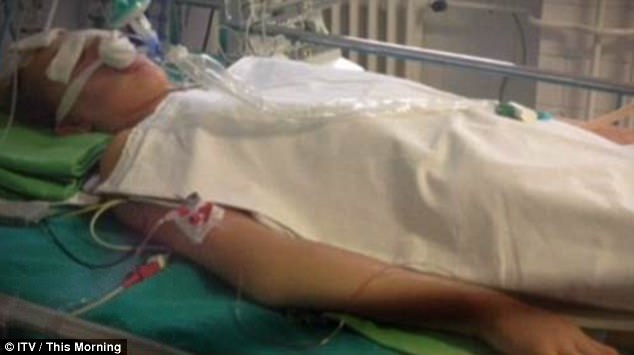 ‘Many patients are not getting the attention they need,’ warns Professor John Warner, a consultant paediatric allergy and chest physician at St Mary’s Hospital in London.

In 2007, the House of Lords recommended that every health region should have a specialist allergy centre led by a full-time allergy consultant.

But services remain ‘patchy’, and most spcialist services are in and around London, says Professor Warner.

‘Allergy services have fallen off the bottom of the list, with inevitable consequences for patients,’ he says. And the care that is there for people with allergies is often unco-ordinated.

‘A patient may have asthma, hay fever and bowel problems that might be made worse by allergies,’ adds Professor Warner. 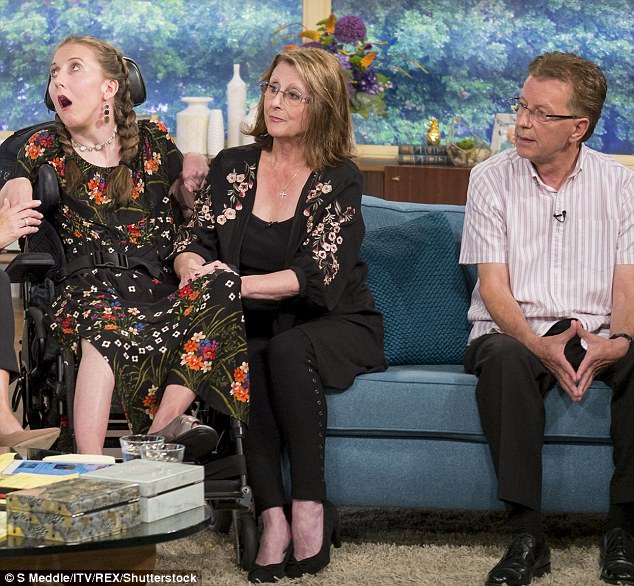 Sue Shead (centre) said: ‘I try to keep a brave face for Amy May but some days it is hard. As is constantly remembering that if people took allergies more seriously then what happened to our daughter need never have happened’

‘The condition needs to be treated as a whole by a specialist who can see the links between the different problems, not passing the patient from one consultant to another who has no understanding of the bigger picture, as so often happens now.’

The good news is that advances are being made in the treatment and prevention of allergies.

Research by King’s College London, published in 2015 in the New England Journal of Medicine, revealed that peanut allergies can be prevented by feeding young children nuts.

Immunotherapy — gradually introducing allergens to allow allergy patients to build up a resistance to them — is also more widely prescribed in the UK now.

For Sue Shead such advances, while welcome, come too late.

‘I try to keep a brave face for Amy May but some days it is hard,’ she says. ‘As is constantly remembering that if people took allergies more seriously then what happened to our daughter need never have happened.’