A mother is suing the NHS for millions of pounds over the ‘wrongful birth’ of her daughter after doctors failed to detect she was missing a part of her brain.

Lindsey Shaw, 32, claims she would have aborted her daughter Emily had she known she would be born with rare and crippling disabilities.

Lawyers said that Emily, now four, ‘will live in a wheelchair for the rest of her life’ and is unable to laugh, despite being able to ‘just about smile’.

Mrs Shaw had an ultrasound scan when she was 21 weeks pregnant, with medics at Middlesbrough’s James Cook Hospital reporting that everything was ‘normal’.

But after Mrs Shaw, of Eston in North Yorkshire, gave birth to Emily in October 2014, it became clear that something was wrong.

Lindsey Shaw, 32, claims she would have aborted her daughter Emily had she known she would be born with rare and crippling disabilities 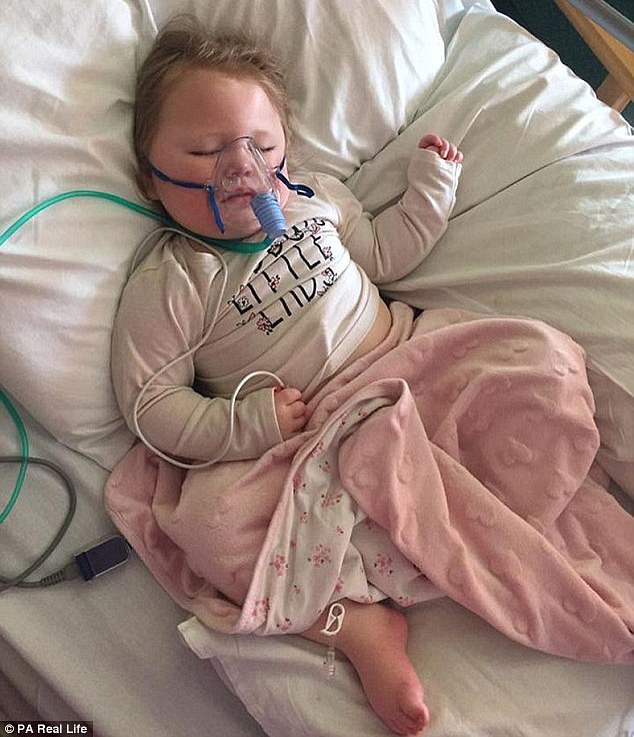 Lawyers said that Emily, now four, ‘will live in a wheelchair for the rest of her life’ and is unable to laugh, despite being able to ‘just about smile’

A series of tests finally revealed Emily had Aicardi syndrome, a rare condition involving the absence of the structure connecting the two spheres of the brain.

Mrs Shaw is now suing South Tees Hospitals NHS Foundation Trust, claiming the doctor who carried out the June 2014 scan should have noticed the irregularity.

Her claim against the NHS is legally termed a ‘wrongful birth’ case as Mrs Shaw says she would have had an abortion if she had been warned about her disabilities.

But lawyers for the NHS Trust deny liability, pointing out the doctor had taken several scans which showed features which looked like the missing element of the brain.

Aicardi Syndrome affects just 4,000 sufferers around the world and has a massive impact on development.

It has left Emily partially blind, stricken by learning difficulties, unable to speak or walk, and having to eat through a tube.

In earlier interviews, Mrs Shaw explained: ‘She can’t walk and she can’t sit up, she has no body strength.’ 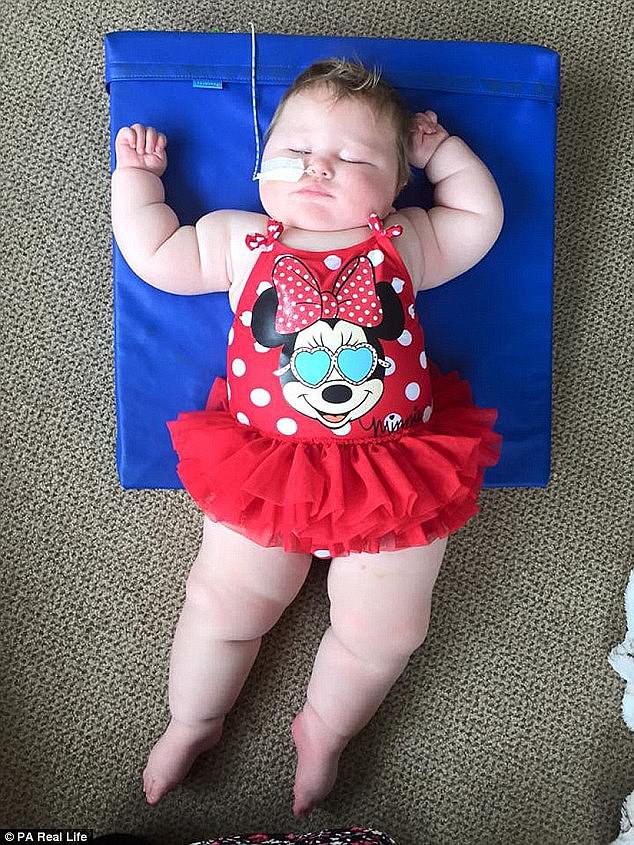 A series of tests finally revealed Emily had Aicardi syndrome, a rare condition involving the absence of the structure connecting the two spheres of the brain

‘We try to keep her as healthy as possible,’ said Mrs Shaw, and added: ‘she gets a lot of chest infections which have taken a lot of kids’ lives.’

The family’s solicitor, Wayne Walker, said Mrs Shaw is now seeking compensation from the NHS, and her claim could well run to ‘several million pounds’.

‘Emily cannot walk and is partially sighted, she will live in a wheelchair for the rest of her life,’ he said outside court during the trial.

But in fact this feature was missing.

Had its absence been properly detected it would have rang sufficient alarm bells to prompt further tests, such as an MRI scan, he told London’s High Court.

An MRI would have confirmed that the baby’s brain was drastically underdeveloped due to a lack of the vital structure dividing the two spheres of the brain, said Mr Matthews. 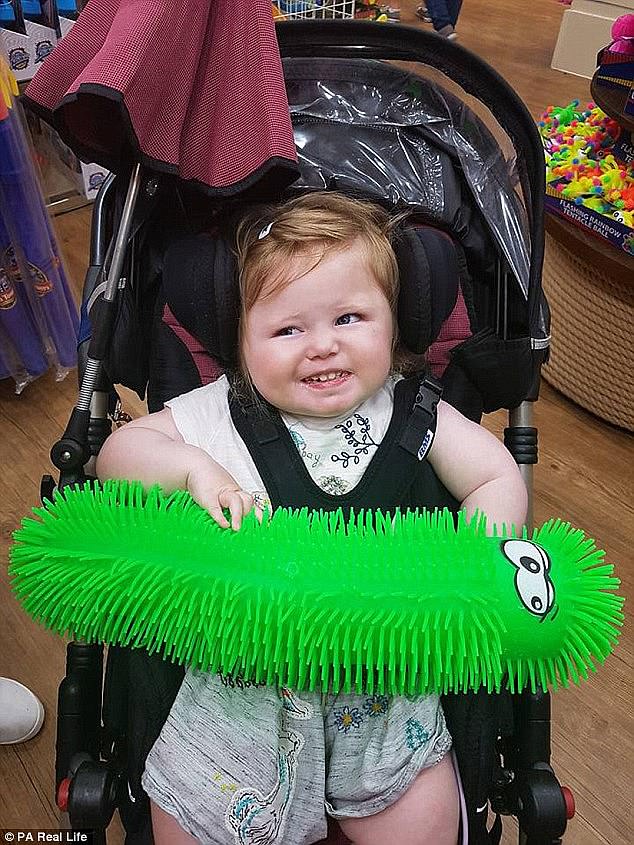 Mrs Shaw, who has not come to court due to the burden of caring for Emily, is claiming massive damages for the costs of bringing up and looking after her disabled daughter

‘Mrs Shaw would have been offered termination of the pregnancy, which she would have accepted,’ added the barrister.

She has a healthy older daughter, aged nine.

Miss Shaw was not present for the trial, but afterwards said deciding whether or not to have a termination would be the ‘most difficult decision for a mother to make’.

What is the brain condition known as Aicardi syndrome?

People with Aicardi syndrome have absent or underdeveloped tissue connecting the left and right halves of the brain.

They have seizures beginning in infancy, which tend to progress to recurrent seizures (epilepsy) that can be difficult to treat.

Affected individuals also have chorioretinal lacunae, which are defects in the light-sensitive tissue at the back of the eye – which can lead to blindness.

Most affected individuals have moderate to severe developmental delay and intellectual disability, although some people with this disorder have milder disability.

The severity of Aicardi syndrome varies. Some people with this disorder have very severe epilepsy and may not survive past childhood.

Less severely affected individuals may live into adulthood with milder signs and symptoms.

‘I would have ended the pregnancy, not because of her being disabled, not because I do not love her, but because if I knew she would suffer daily and have no quality of life, and have a shortened life, I wouldn’t have her go through that,’ she said.

Her solicitor, Wayne Walker, explained: ‘The reason why this case was investigated is to ensure that any future anomaly is identified or, if confirmation cannot be given, that mothers are aware of those difficulties.

‘Rather than those treating patients making decisions for the patient, the patient should have the opportunity to be told that there are problems, or that certain structures that are necessary were not visualised, allowing mothers to make decisions about their pregnancy when all of the information is presented to them.’

The key issue to be decided by the judge is whether the consultant doctor who ran the scan was at fault in noting the presence of the fluid filled space within the brain when none was there, the court heard.

Mrs Shaw continued with her pregnancy ‘in reliance on the doctor’s reassurances that there were no abnormalities or concerns’, said Mr Matthews, who claimed the medic’s interpretation of the scene was below standard.

‘The narrow issue is whether the doctor could properly have been satisfied that this feature within the fetal brain – the cavum septum pellucidum – was present when in fact it was absent,’ the barrister explained.

It was ‘not reasonable’ for a competent sonographer to make that finding, he argued.

But the NHS denies breach of duty and the case hinges on whether the doctor’s interpretation of the scan can legitimately be criticised.

Jane Mishcon, barrister for the NHS Trust, pointed out that the doctor had taken six scans in all in an effort to gain a clear picture.

The medic looked for and believed she had identified the presence of the specific feature within the brain ‘because there were a number of images of the fetal brain that showed reflections that mimicked a normal cavum’, she explained.

The scan was carried out in line with standard guidance and all the correct fetal measurements were also taken, she added.

On top of that, the ‘anomaly scan’ of June 2014 was not targeted to look specifically for brain abnormalities, but to check the baby’s heart and spine, the court heard. 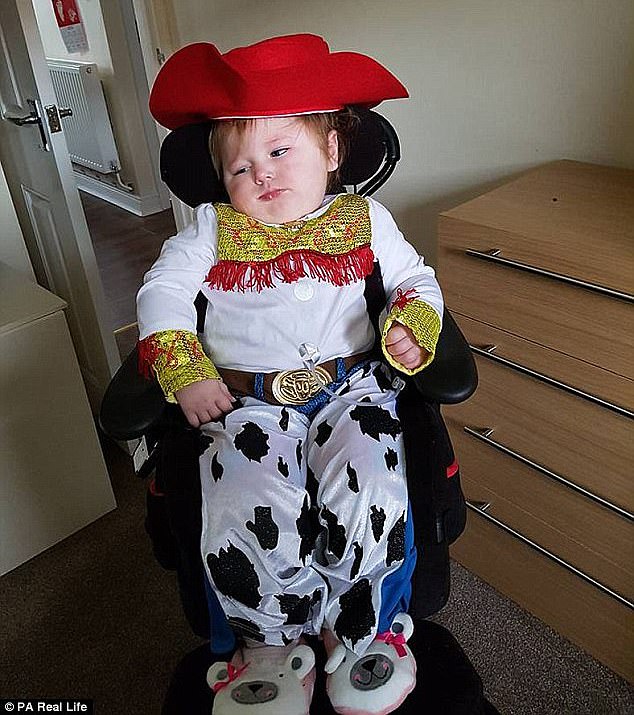 Mrs Shaw, of Eston in North Yorkshire, gave birth to Emily in October 2014, it became clear that something was wrong