A mother has shown how a window cleaning squeegee can be used to pick up stubborn hair from the carpet.

British mother Manda Goody took to Facebook group Hinch Army Cleaning Tips to reveal how she transformed her daughter’s dirty carpet with the help of the 59p tool from Home Bargains.

Writing on the group, Manda admitted she was ‘shocked’ by how much of her daughter’s long hair had been embedded in the carpet and shared a snap of a large hairball that had been pulled up.

Cleaning fans were sent into a frenzy over the hack and vowed to try it on their own flat carpets.

Manda urged other mothers to try the hack for themselves, saying it had transformed her carpet

Manda wrote: ‘You lovely Hinchers have done it again. I have a lovely silver grey carpet which lately has become a bit dull and I’m always hoovering but it had lost its lovely look.

‘I saw the post about trapped hair and how hoovering doesn’t get it out. So I bought a squeegee for 59p and gave it a go.

‘This is my daughter’s bedroom carpet. She has very long hair. I was totally shocked at how much came up and a bit disgusted to be honest! My carpet now looks brand new again! If you haven’t tried it yet do it!’ 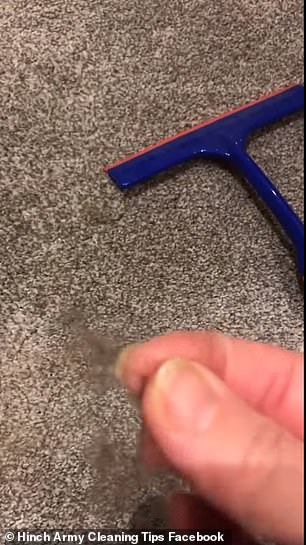 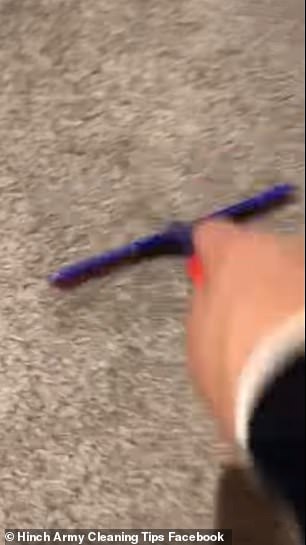 Following the advice, which has received hundreds of likes, social media users applauded the Facebook user for her creativity.

One user wrote: ‘I do this every week now. Amazing how much hair and dust comes up. Only thing is my squeegee doesn’t last long.’

Another person commented: ‘Where did you get the squeegee? I want to do this.’

One Facebook user added: ‘I do my stairs often and the amount that comes off is crazy!

Elsewhere, other social media users shared some the household items they had also used to remove unwanted hair from their carpets at home.

One user wrote: ‘Great idea! I have wooden floors now but I used to use a thick elastic band when I had carpets…’

Another suggested: ‘Also, you can get a rubber brush (home bargains) which makes the job much easier.’

Another member said: ‘I do this. I’ve also got a hideous pair of rubber sliders that are used specifically for this. They clean the carpet and it’s a work out to boot.’