Mother who thought she had flu had a rare brain condition

A mum who thought she was suffering from flu had in fact been struck down by a rare brain condition that caused her to forget her daughter’s name.

Her condition was so severe that she spent 22 hours a day sleeping and her memory was temporarily wiped – meaning she couldn’t even recognise her own two-year-old daughter India.

After three weeks in hospital, Hannah, 35, a former Cambridge graduate was finally allowed home but her brain function is still far from normal. 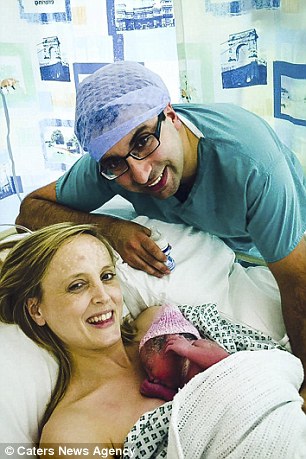 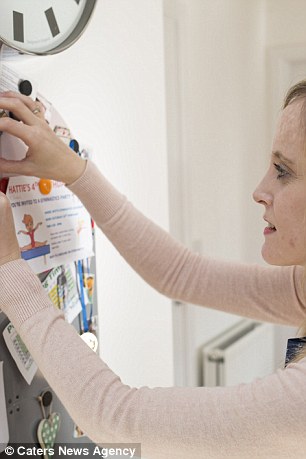 Hannah’s condition was so severe that she spent 22 hours a day sleeping and couldn’t remember the names of anybody that visited her, including her two-year-old daughter India 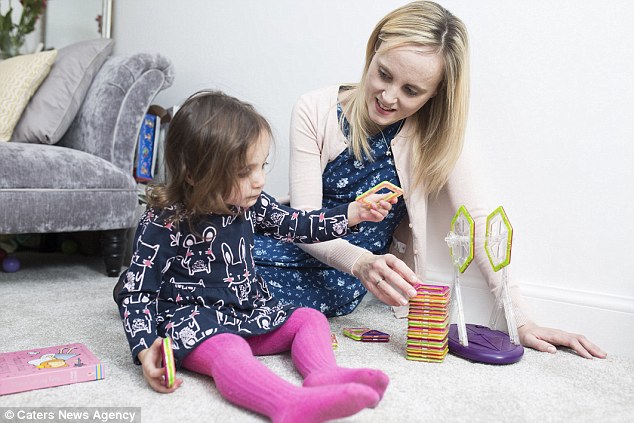 Hannah Joels playing with her daughter India, 2, at her home in Loughborough

The primary school teacher still has huge gaps in her memory from the past two years, and is unable to remember family holidays, people’s names or her daughter growing up.

For the former Cambridge graduate, the difficulty she has speaking and remembering words is also a major frustration.

She said: ‘I was terrified when I was in hospital, although I was trying hard to pretend I was normal and make people think I was managing.

‘But in reality I wasn’t and people could tell. I could not remember people’s names, not even my own daughter.

‘I was always very switched on, so it was really scary for my husband when I called her ‘Angela’ or something like that.

‘I can’t remember anything from the first five days – and I was sleeping for 22 hours a day.

‘I’m very lucky to be alive’

‘Even now so many memories won’t come back. I don’t have a coping strategy yet, but I’m trying to make as many notes as possible on post-its and my phone so I can remember simple daily tasks.

‘I have told my husband on several occasions that it would be my dream to go on holiday to Thailand.

‘He has to keep pulling out the photos of our trip to show me that we did it. It’s heart breaking not remembering. 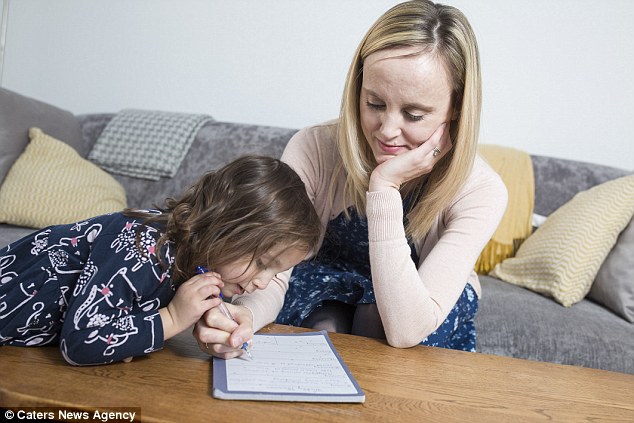 Hannah Joels writing reminders with her daughter India, 2, at her home in Loughborough 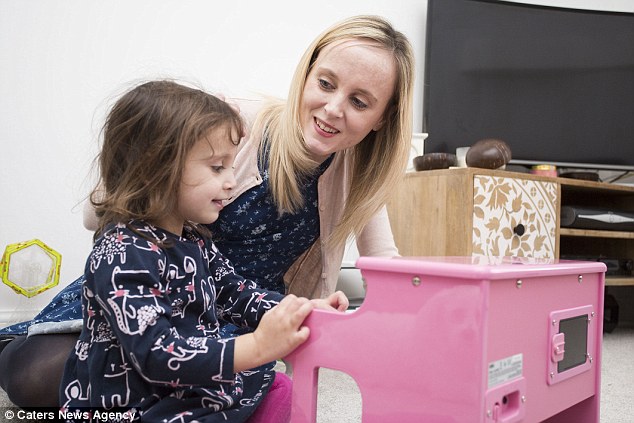 Hannah Joels pictured playing with her daughter India, 2, at her home 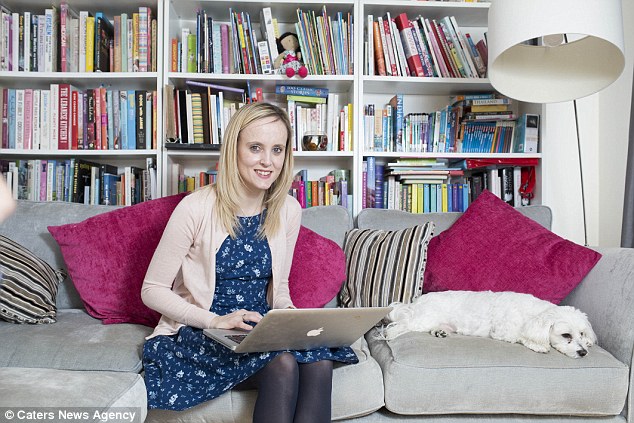 After three weeks in hospital Hannah, 35, was finally allowed home ‘I feel like a complete buffoon when I can’t find the simplest words in front of people.

‘I think the doctors were initially being kind to my husband, but the specialist I am working with now has told me I’m very lucky to be alive.

‘That’s only just sinking in. As frustrating as the slow recovery can be, at least I am here for my daughter.

‘It’s horrible to think that I might not have been after I thought I had the flu.’

Hannah was on a short break in Harrogate, Yorkshire, with her daughter and husband Paul in October when she started feeling ill and visited a doctor.

They told her she most likely had the flu, a diagnosis that was confirmed by her own GP in Loughborough the next day because of the time of year.

However, the next day Hannah felt disconnected and confused and, when her husband returned home after dropping her car off at a garage, he found she was only giving garbled responses to questions.

Paul rushed her to A&E at Queens Medical Centre in Nottingham, where medics were left stumped by her rare condition and waited 12 hours to admit her.

She was eventually diagnosed following a brain scan and lumber puncture and after specialists discovered her sky-high infection levels she was transferred to the neurological ward.

‘It was incredibly tough struggling with my language’

Hannah said: ‘I was having three hour long doses of medication injected daily and it was horrible.

‘I was just desperate to get home and see my daughter, especially as I knew Paul was having to cope with her on his own.

‘But it was incredibly tough struggling with my language. I felt very drained.’

Hannah has since been back to school to visit her Year 4 pupils and struggled to remember her pupils’ names.

She is desperate to return to work, but has been told she will not be able to go back-time until the start of the next academic year. 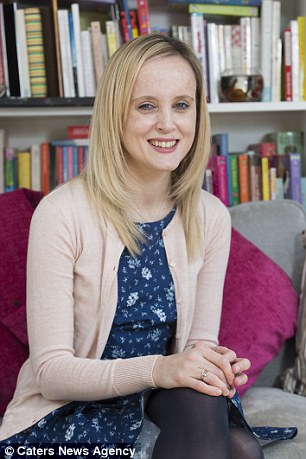 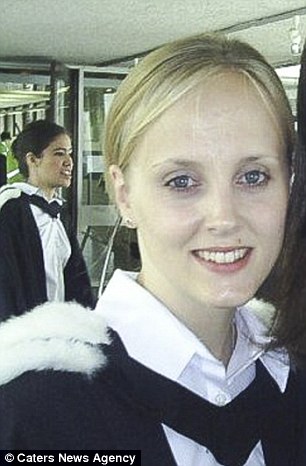 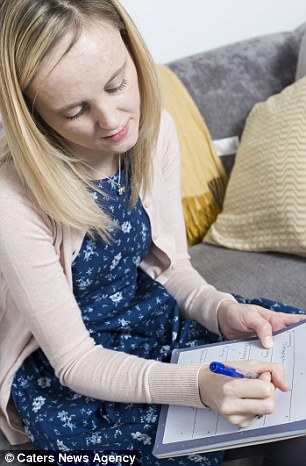 ‘Even harder is not being able to find the words to do it. They just won’t come to mind’

‘I could not remember a single detail’

Until then she has been told to focus on getting over the illness and developing coping mechanisms to support her short term memory.

Hannah said: ‘Scans on my brain still show several dark spots, which are parts that have not recovered.

‘We can’t be sure if they ever will.

Encephalitis is an uncommon but serious condition in which the brain becomes inflamed (swollen).

It can be life-threatening and requires urgent treatment in hospital.

Anyone can be affected, but the very young and very old are most at risk.

Encephalitis sometimes starts off with flu-like symptoms, such as a high temperature and headache, but these don’t always occur.

More serious symptoms develop over hours, days or weeks, including: confusion or disorientation, seizures (fits), changes in personality and behaviour or loss of consciousness.

Dial 999 for an ambulance immediately if you or someone else has these more serious symptoms.

It’s not always clear what causes encephalitis, but it can be caused by viral infections. Several common viruses can spread to the brain and cause encephalitis in rare cases, including the herpes simplex virus (which causes cold sores and genital herpes) and the chickenpox virus.

‘It’s really tough going into the classroom and having to tell the children I can’t remember their names. I had them all committed to memory after the first day.

‘Even harder is not being able to find the words to do it. They just won’t come to mind sometimes.

‘I had photos of a trip to London with my daughter last May came up on my Facebook feed the other day, and I had to ask my husband all about it.

‘The pictures show I was there – but I could not remember a single detail.

‘I just have to focus on the progress I’ve made so far and allow myself more time to recover. But it is really hard.’

Hannah’s husband Paul is now attempting to raise £1000 for The Encephalitis Society, which is helping to increase awareness of the potentially fatal condition on World Encephalitis Day on February 22.

Dr Ava Easton, Chief Executive of the Encephalitis Society, said: ‘One person every minute will be struck down by encephalitis in 2018, irrespective of their age, gender or the country in which they live.

‘This devastating condition has a high death rate while those who survive can be left with an acquired brain injury resulting in epilepsy, fatigue, cognitive difficulties, problems with memory and personality.

‘And yet statistics reveal that eight out of 10 people do not know what encephalitis is – a truly startling figure which we are striving to improve through campaigns such as BrainWalk and World Encephalitis Day on February 22.’

The Encephalitis Society’s ambition is that users of its free BrainWalk App will have walked 52 million steps – the equivalent of walking around the globe – by the end of World Encephalitis Day.

Dr Easton added: ‘Our hope is to bring people together whose lives have been affected by encephalitis and walk around the world to raise awareness of this devastating condition.

‘We estimate that it takes 52 million steps to walk around the globe. In isolation that seems like an impossible figure to reach by World Encephalitis Day, but we believe we can achieve anything by working towards a common goal.’