It’s been nearly a week since the youngest new British royal made his debut, but women worldwide are still shocked by one extraordinary detail of Prince Louis’ birthday: how flawless his mother looked mere hours after delivering him.

While most new mothers lay up in bed for hours after delivery — and understandably so, with their bodies recovering from such an ordeal — The Duchess of Cambridge was on her feet, dressed, and looking positively stunning a mere seven hours later.

Of course, that’s hardly the norm — as many new mothers have attested to. Since the royal birth on Monday, dozens of other women have taken to social media to share their own post-baby photos.

Incredible: Kate Middleton stepped out in a designer dress and heels to smile for cameras just seven hours after giving birth 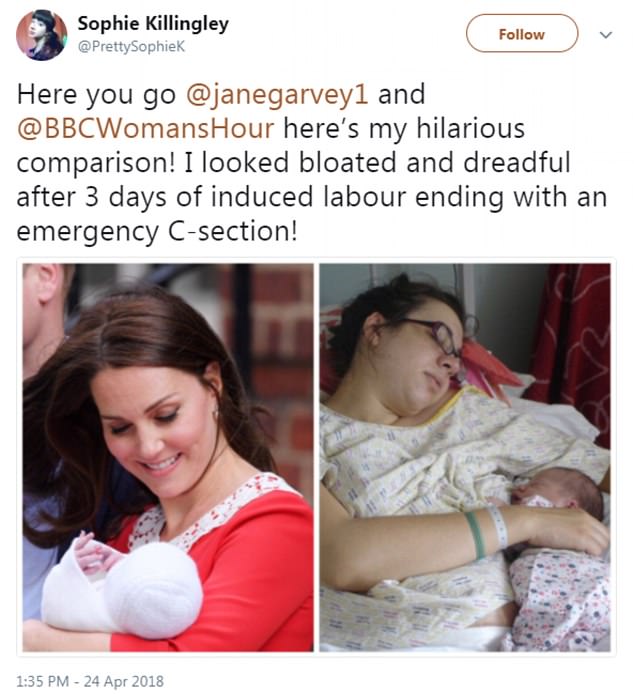 Not the norm: Other mums have pointed out that Kate is the exception 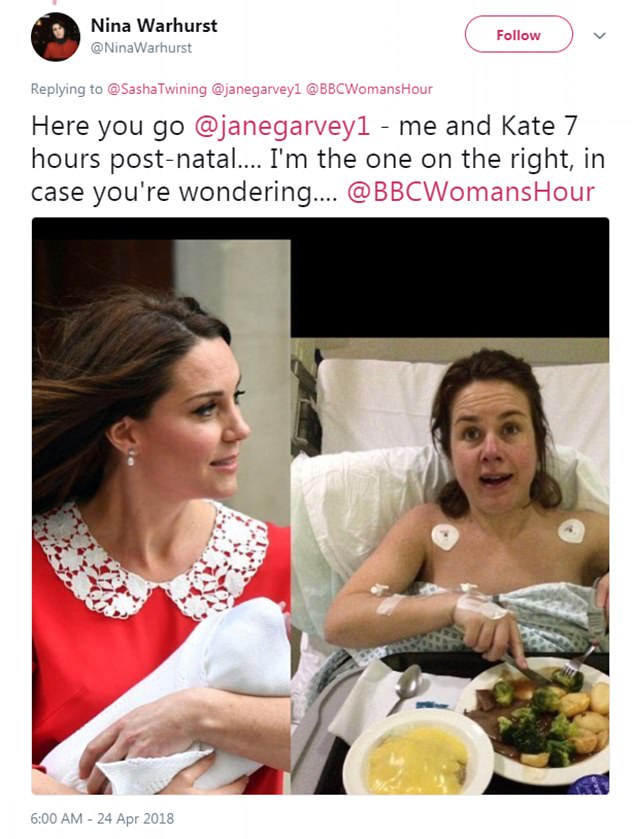 Hungry! Several have posted their own photos, showing what they looked like hours after delivering a baby 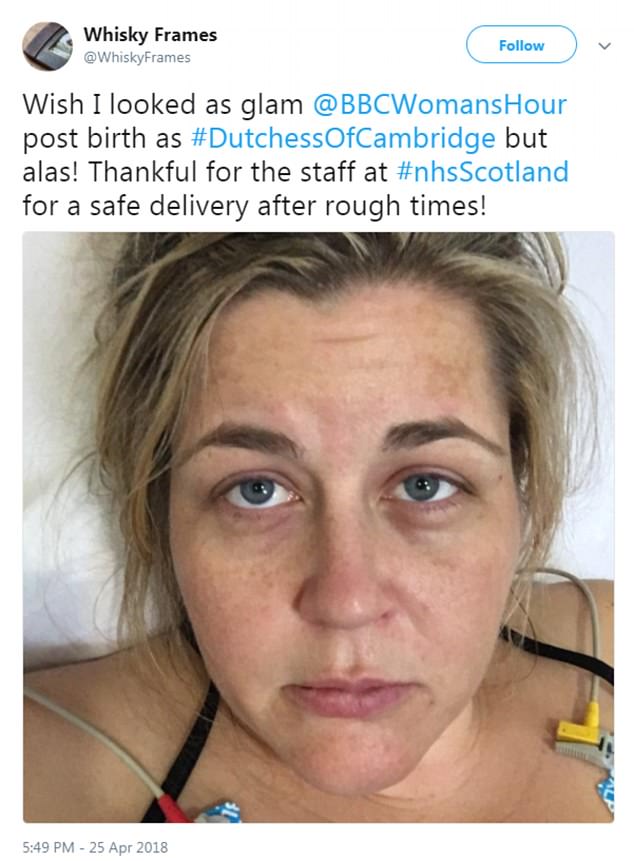 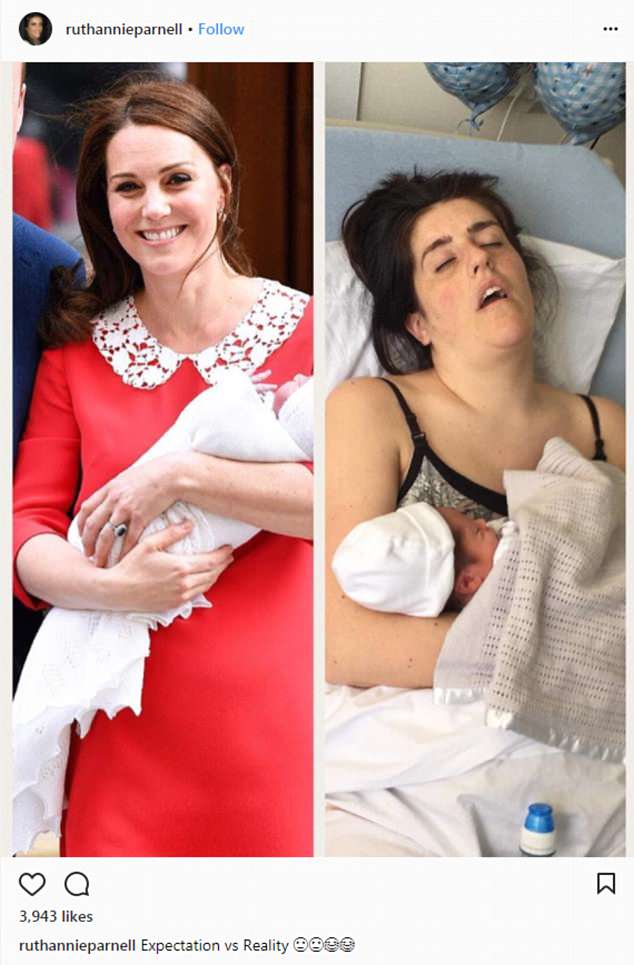 Catching some Z’s! Some have even passed out from exhaustion in their pictures

Kate Middleton and Prince William welcomed their third child at 11:01am on April 23. Around 6pm, she stepped outside the Lindo Wing of St. Mary’s Hospital, beaming for the press and fans waiting outside.

Dressed in a red Jenny Packham shift with a lacy white Peter Pan collar that clung to her still-round bump and a pair of nude pumps, Kate was the picture of elegance as she cradled her newborn and smiled for a few moments for the photographers.

Many mothers have since taken to Instagram and Twitter to express awe at how incredible they looked — all the while posting photos to show how far they came from keeping up.

‘Everyone is praising Kate Middleton for being photographed hours after giving birth,’ wrote one mum. ‘It made me go back through old pictures of when I had my first, and it turns out Kate isn’t the only one with #postbirthphotos.’ 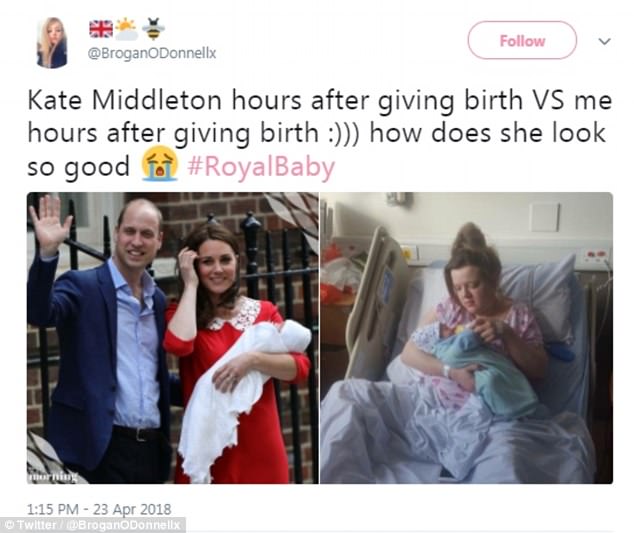 Insane: Many mothers can’t understand how Kate managed to look so flawless 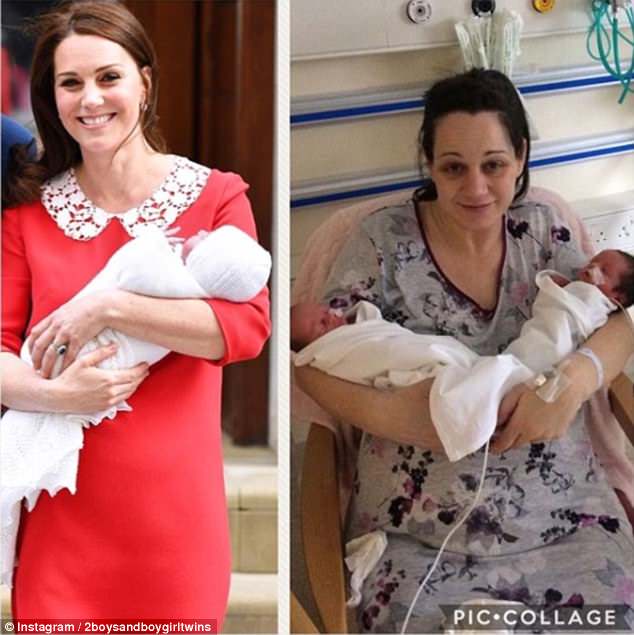 Truth: They’ve joked that Kate is the ‘expectation’ and they are the ‘reality’ 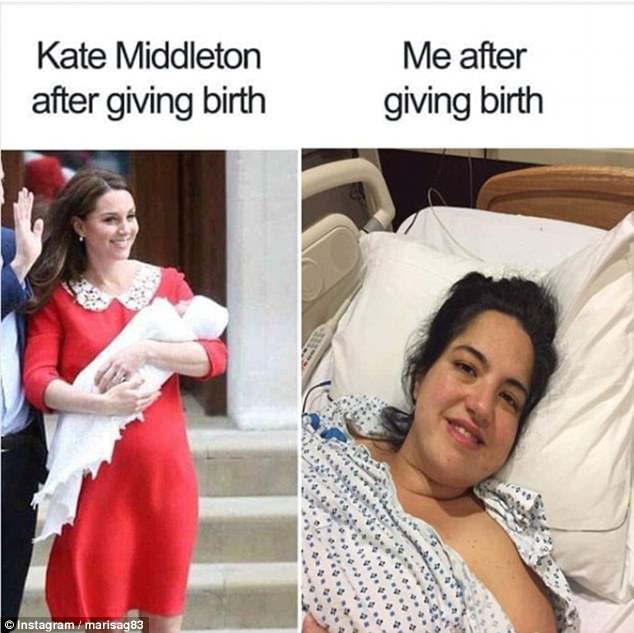 Staying put: While the Duchess stepped outside, these mothers were still in bed 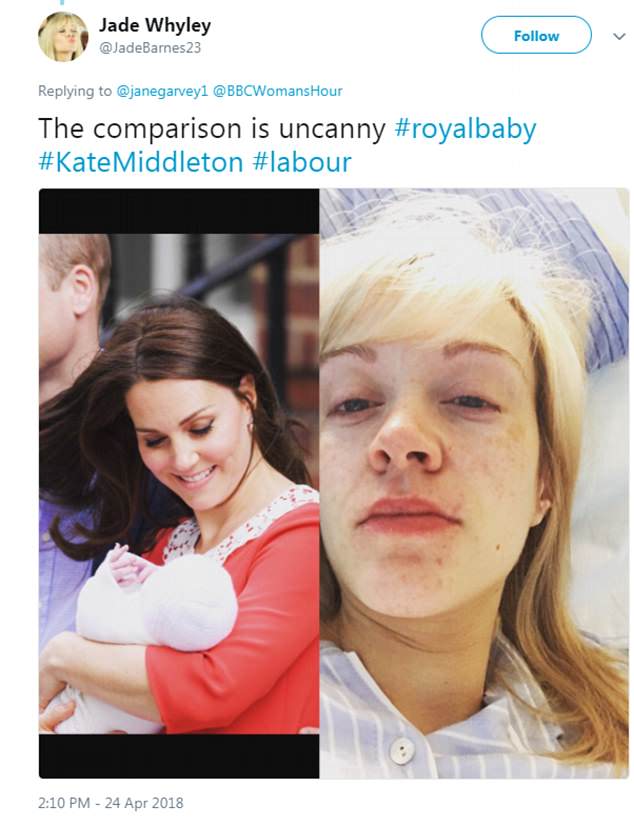 No glam squad here! They also didn’t have faces with professionally-applied make-up 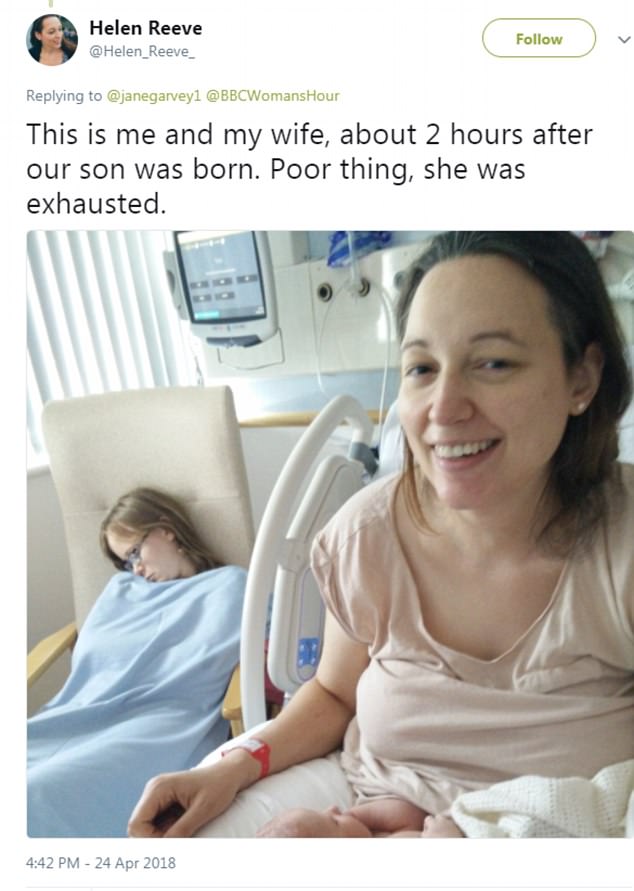 Can’t all be Kate! The mothers who have posted all seem to think the comparison is quite funny 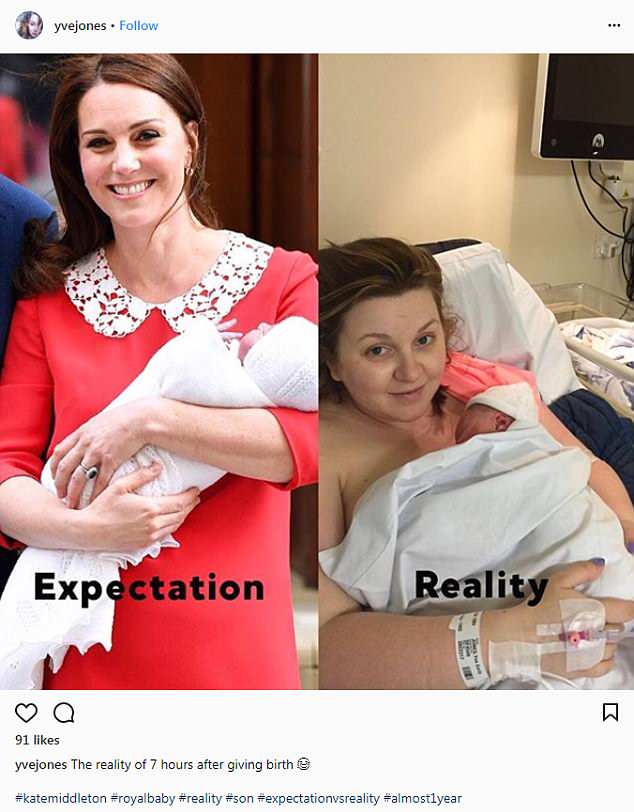 Fluids: While the royal was photo-ready, many mothers are still hooked up to IVs hours later

Attached, she included a much less glammed-up post-birth photo, showing herself still in her hospital bed. ‘Who’s the princess now?’ she joked.

Some have written that, while they know Kate had a whole team to get her picture-ready, they still can’t believe how amazing she looked.

‘I mean, I know she had help to look that good but I would’ve needed a mortician that specializes in putting make-up on corpses and industrial quantities of sanitary wear,’ wrote another.

‘I actually feel bad that she has to get all dolled up right after birthing,’ wrote a third. ‘I just wanted to stuff my face and sleep.’

Most of the women have posted pictures of themselves still in their hospital gowns, reclining in bed. Few have on any make-up at all, and most are sporting messy hair. 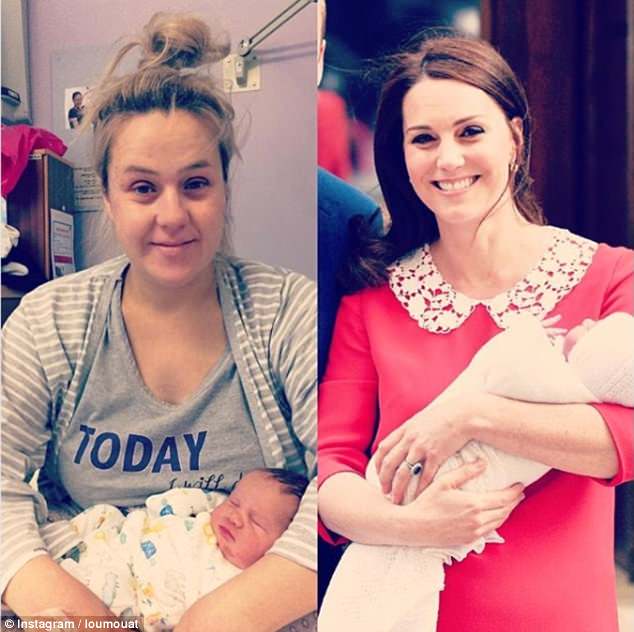 Energy: What’s most surprising to many is that Kate hardly looked tired 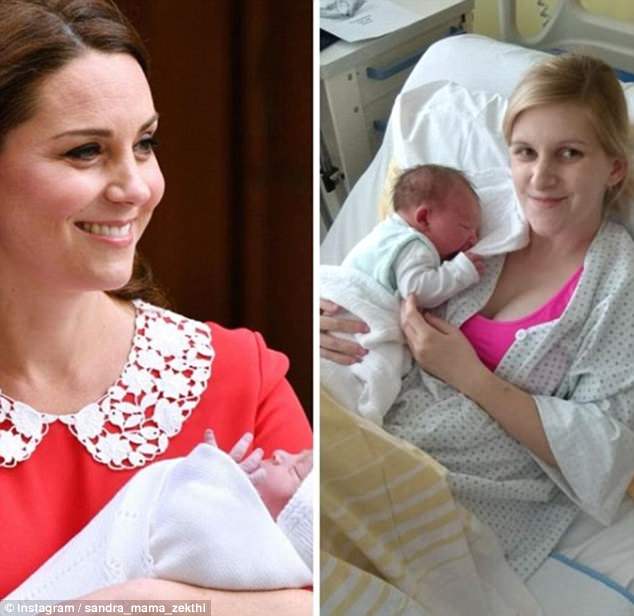 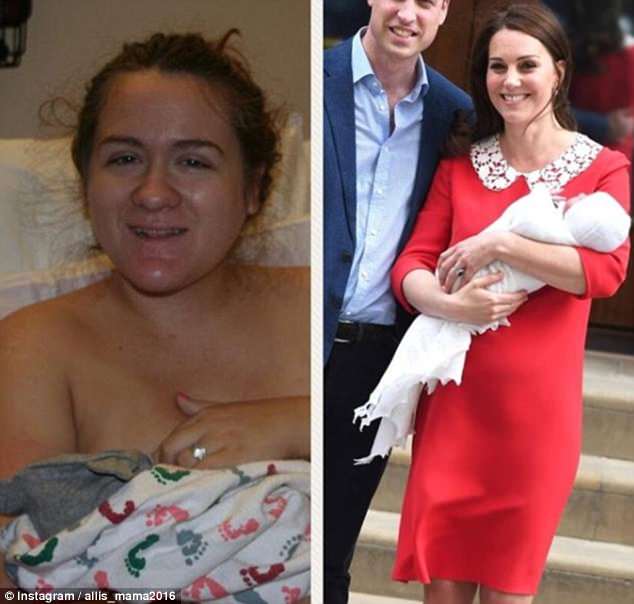 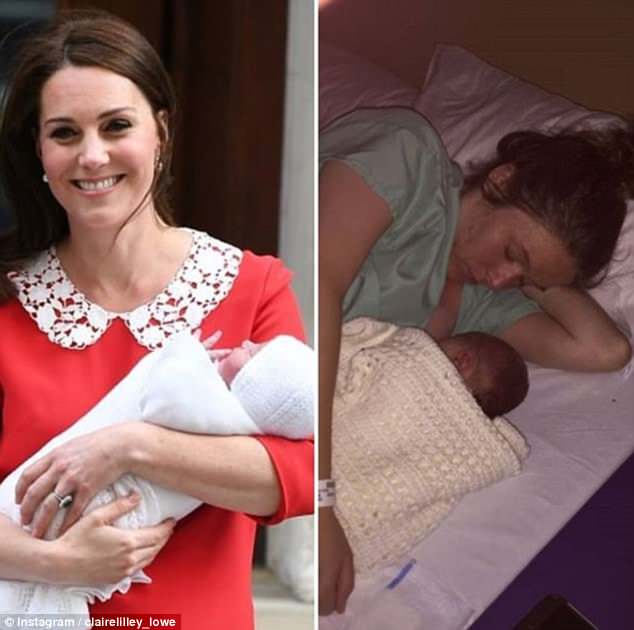 Nursing time: A few have pictured themselves breastfeeding after birth 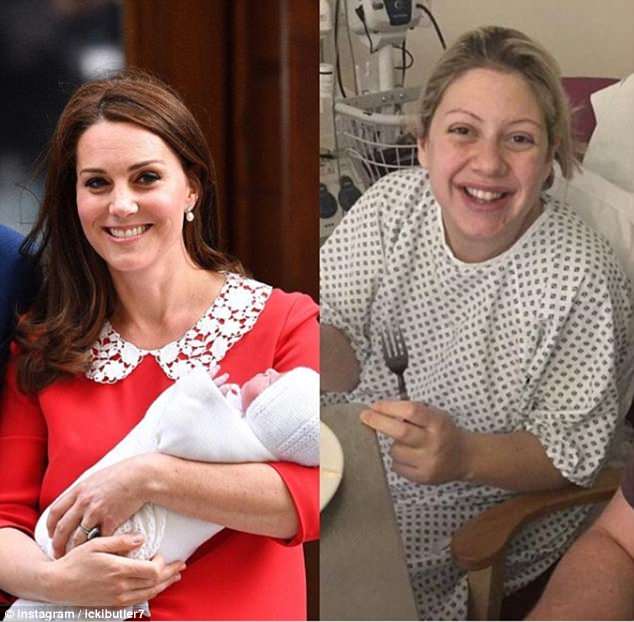 Beaming! Only a few are pictured smiling as widely as Kate 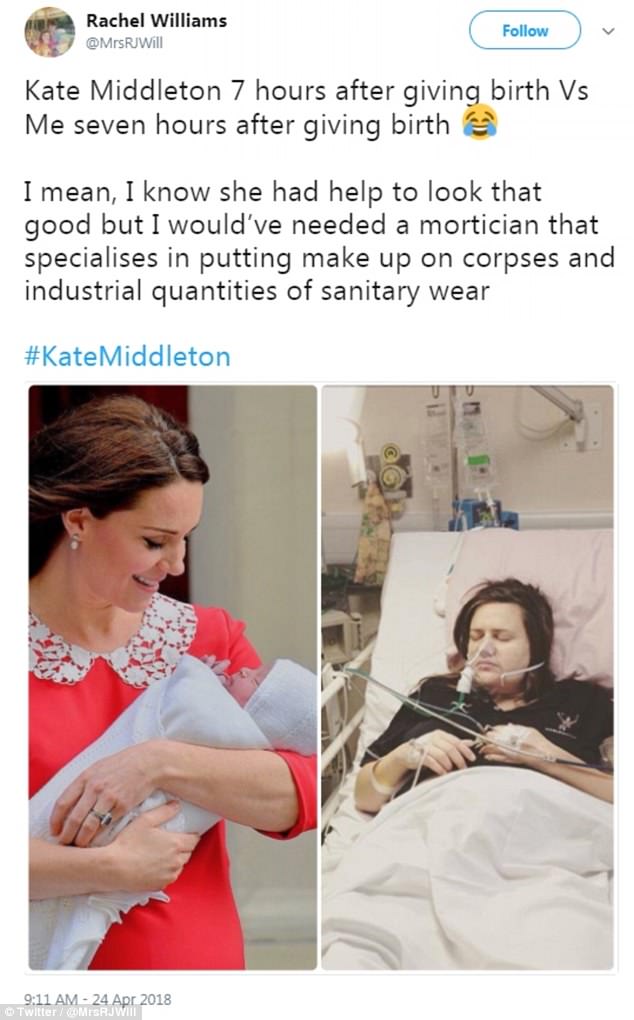 Healthy: People have remarked on how it doesn’t look like Kate just went through a major medical procedure

Nearly all of them look exhausted, and some are actually passed out sleeping. A handful also posted images of themselves breastfeeding, or tucking into a meal themselves.

‘This was one of my best photos,’ wrote one mum of the snap she put up to compare to Kate’s, noting that she stayed away from any that showed her covered in baby poo.

‘She looked beautiful and I feel bad people [are] making negative comments about how unreal [it] is for her to have left in heels and a dress,’ wrote another.

‘Let’s be honest though, we all know that under that lovey outfit is a nursing bra with pads to keep her from leaking through her clothes, along with a flabby after-birth belly tucked into some mesh underwear. You also have the world’s largest pad, that’s covered in some witch hazel pads and ointment… if you’re lucky, you get a maxi pad that is also an ice pack to shove in your mesh undies.’ 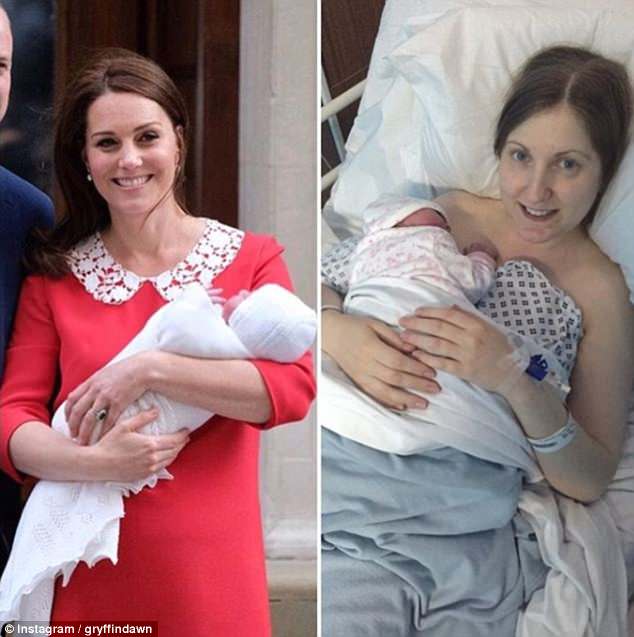 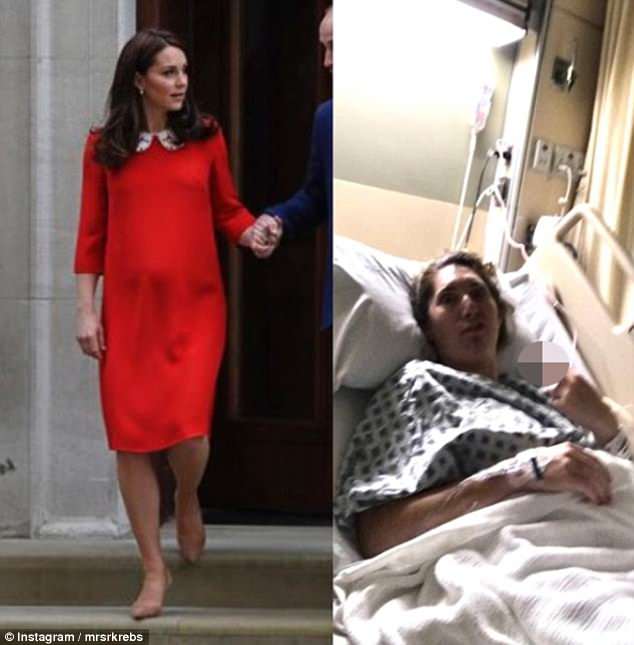 Mood: Not everyone looked as chipper as Kate did in the aftermath 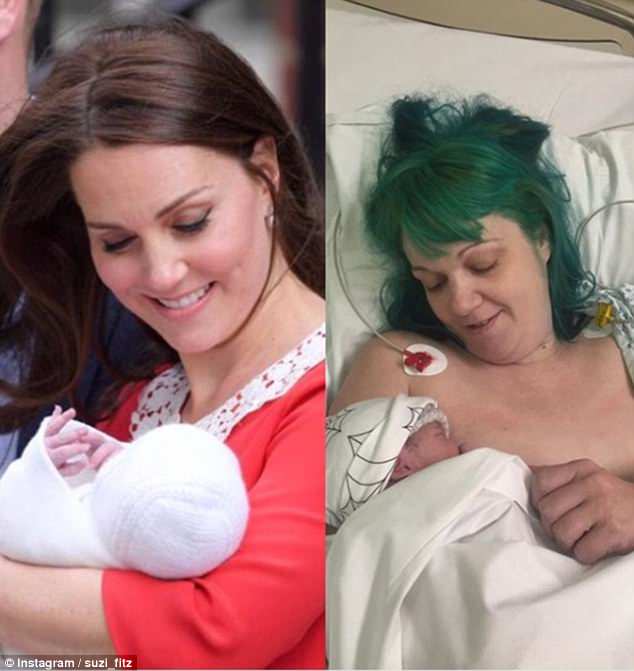 Amazing: Kate has stepped out for pictures after giving birth to each of her children 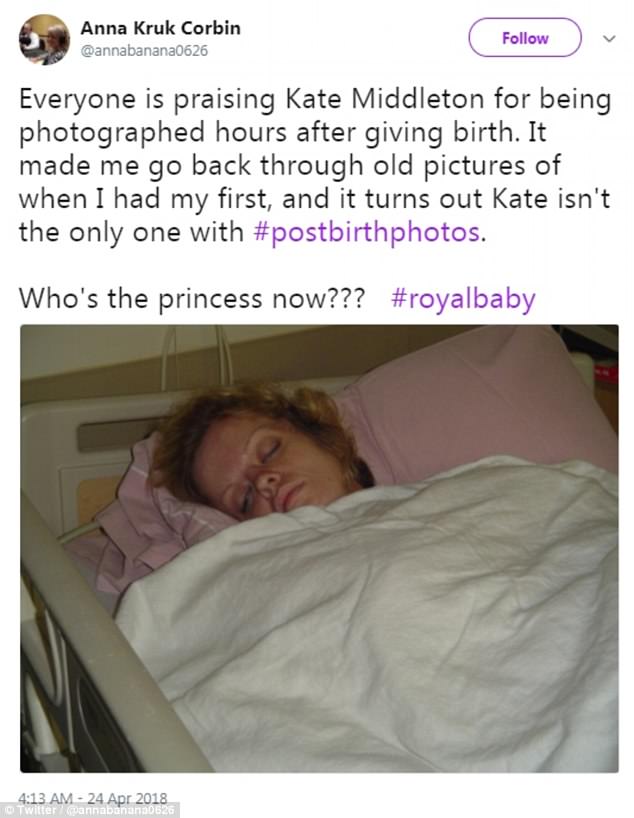 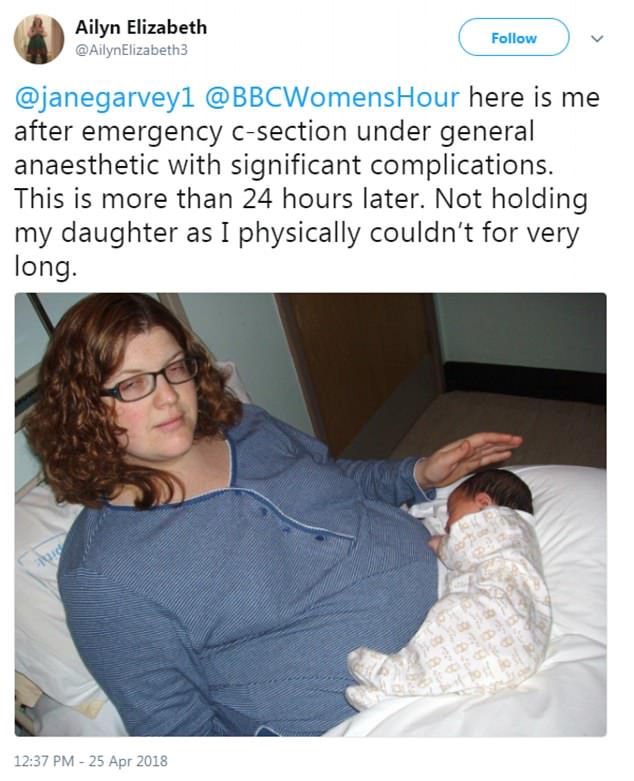 Real? In the past, Kate has been praised for showing that she still had a tummy 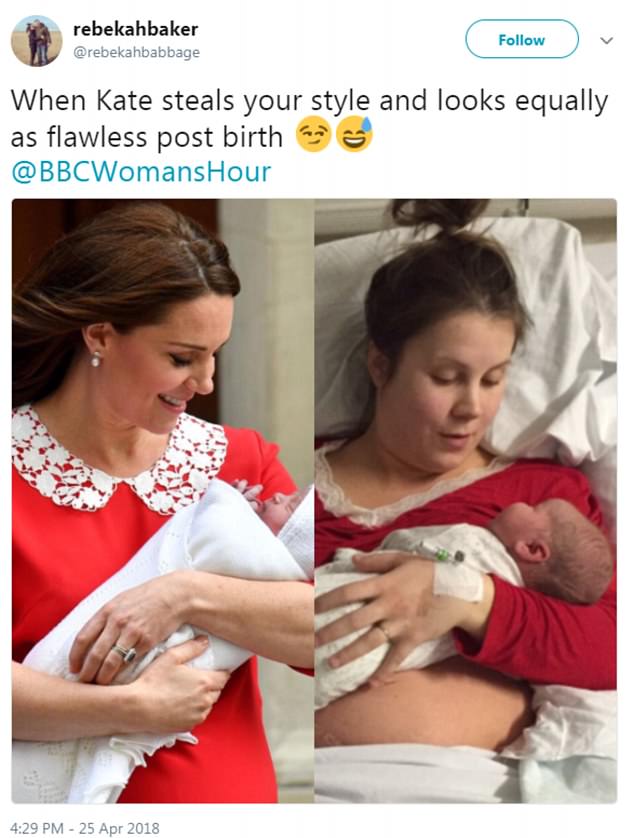 Twins! This mum actually looked quite similar to Kate 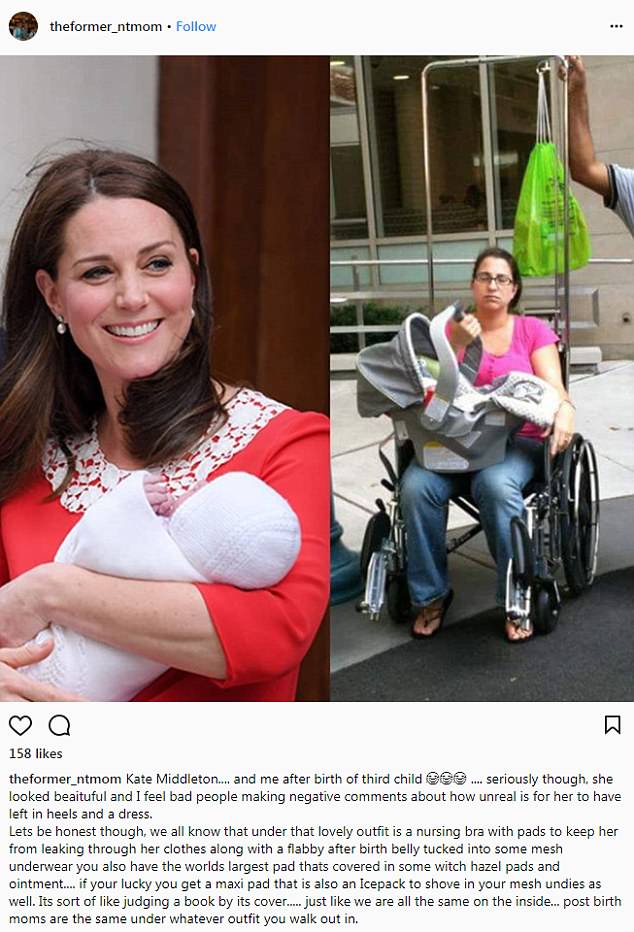 Comparison: A lot of mothers are actually wheeled out of the hospital afterward 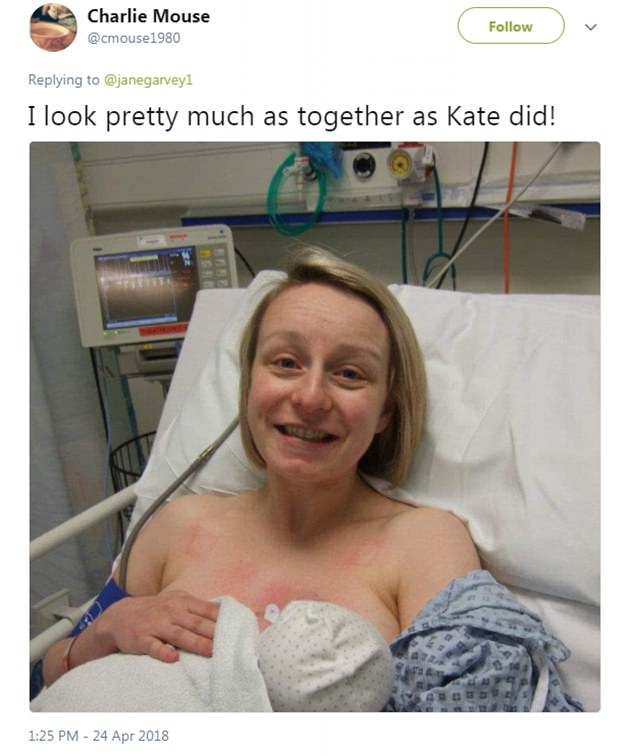 Seriously: People also speculated on whether she was wearing a nursing bra and mesh underwear