A mother has revealed her heartbreak after her baby died in the womb from the common group B strep bug days before she was due to be born.

Zoe Ely, 22, found out she had group B strep (GBS) while 31 weeks pregnant but claims she was told there was nothing to worry about.

When she went into labour at 36 weeks, Ms Ely and her partner, Douglas McBain, were given the shattering news that their baby had died in the womb.

The couple racked their brains for nine weeks over what went wrong before the post-mortem came back, revealing their daughter had died of GBS complications.

Around one in five pregnant women carry GBS, and there is a small risk it can be passed on to the baby during childbirth or in the womb.

The odds are so rare – especially while in the womb – the NHS does not offer routine GBS screening.

A leading charity said the story was ‘a rare and tragic case’.

Zoe Ely, 22, and Douglas McBain, have revealed their heartbreak after their baby died in the womb from the common group B strep bug days before she was due to be born 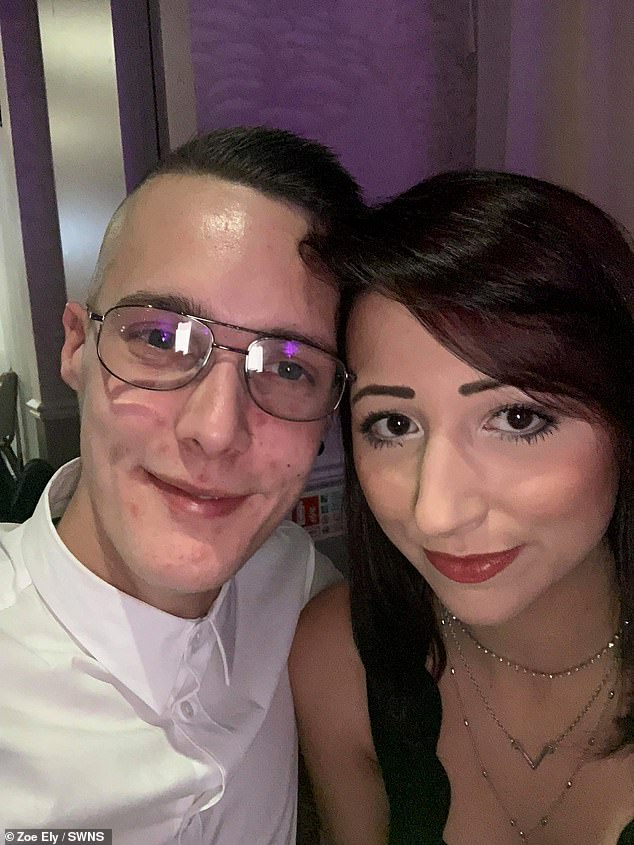 When Ms Ely went into labour at 36 weeks, she was given the shattering news that her baby had died in the womb. It was not clear why until nine weeks later 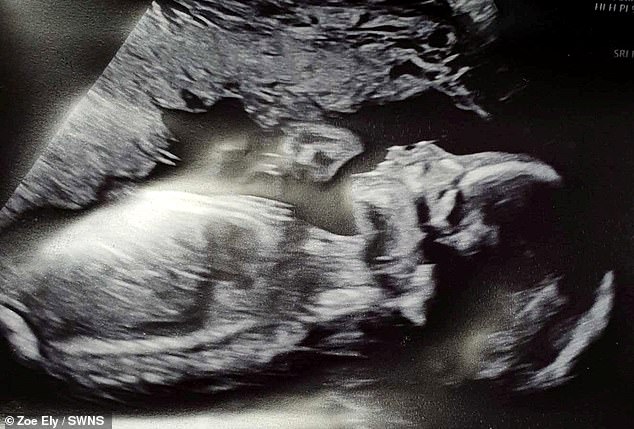 The couple were looking forward to having their first child, Olive. Pictured, a scan

Ms Ely and Mr McBain, first-time parents from Aylesbury, Buckinghamshire, had planned to call their daughter Olive. They were eagerly waiting her arrival in June this year.

Speaking of the moment her Olive was born, Ms Ely said: ‘I fell to the floor in complete and utter distress, I have never been so heartbroken in all my life.

‘I was in floods of tears just screaming at the top of my lungs. I was begging for someone to do something, to try to save my baby.

‘After learning I had GBS doctors had told me time and time again there was nothing to worry about.

‘They assured me the baby wouldn’t be affected in the womb, so when I found out she had I was angry.’

GBS is a type of bacteria that is very common in adults – affecting up to 40 per cent – that is typically harmless.

At present, controversial guidance says only pregnant women who have risk factors for GBS are offered testing on the NHS.

This includes if the women’s waters break or you go into labour before 37 weeks of pregnancy.

Ms Ely was having stomach contractions at 31 weeks, leaving doctors concerned she was having an early labour and resulting in a test for GBS.

If a pregnant woman is found to carry GBS, then she should be told that and told that she will be offered intravenous antibiotics when she goes in to labour.

It is not clear if Ms Ely was given antibiotics during labour. 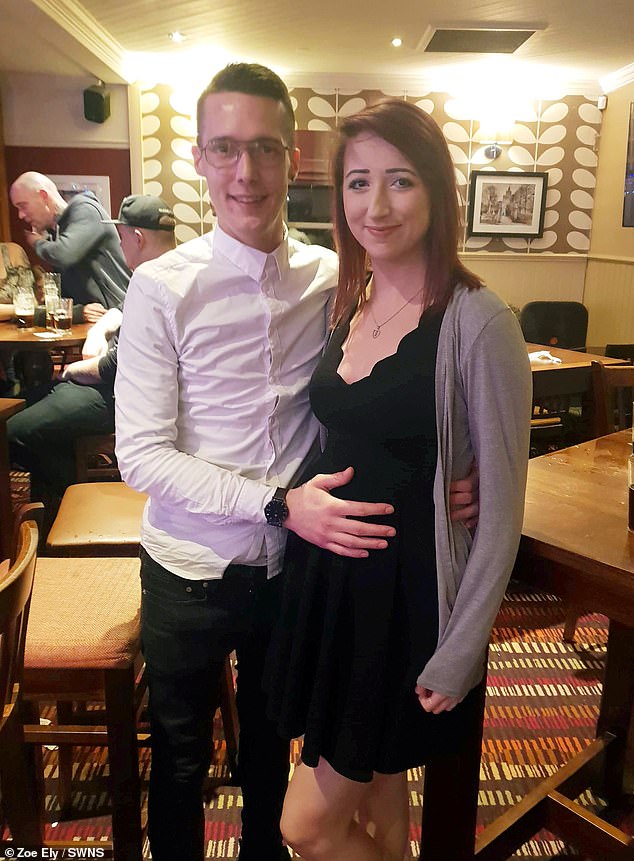 Ms Ely found out she had group B strep (GBS) late in her pregnancy but was told there was nothing to worry about, so she forgot all about it. Pictured with her partner while pregnant

CAN PREGNANT WOMAN GET A TEST FOR GBS?

The UK is one of a minority of high-income countries that doesn’t routinely offer pregnant women the opportunity to be tested for group B strep carriage.

GBS having been found during the pregnancy is one of the ‘risk factors’ which should trigger the offer of intravenous antibiotics in labour according to both the RCOG and NICE.

The RCOG recommends one situation in which testing may be offered – where the mother tested positive in a previous pregnancy and the baby was well – but no others.

The guidelines also state that maternal request is not a reason to test for GBS carriage, which has received controversy.

If a women is offered a test in pregnancy, then this is usually done by a vaginal swab. If GBS is present, treatment (antibiotics) will still be held until labour. This is because the antibiotics in pregnancy will not reduce the chance of GBS being passed to your baby and GBS can return after the course of antibiotics has been finished.

Around one in 2,000 babies develop a GBS infection after contracting it during childbirth. It is the most common cause of severe infection in newborn babies.

The figures for stillbirths, miscarriage and premature labour caused by GBS contracted in the womb are not so clear.

The couple were in the dark over why Olive had died before the post-mortem results came back nine weeks after the birth.

It revealed Olive had died from meningitis and pneumonia around two days before Ms Ely went into labour, which came about as a result of GBS contracted from Ms Ely.

Ms Ely said: ‘We had no idea how Olive had died, which was really difficult to live with for so long.’

The couple say doctors reassured them they had never seen an infant get the infection inside the womb because it is so rare.

Ms Ely said: ‘The doctors had never seen what happened to Olive.’

‘At first we were both really angry about her cause of death.’

‘I did blame the doctors but now I know they were just making decisions based on their experience.

‘Hospitals and doctors think a baby won’t die from GBS in the womb but Olive is proof that they do. People need to know that.’ 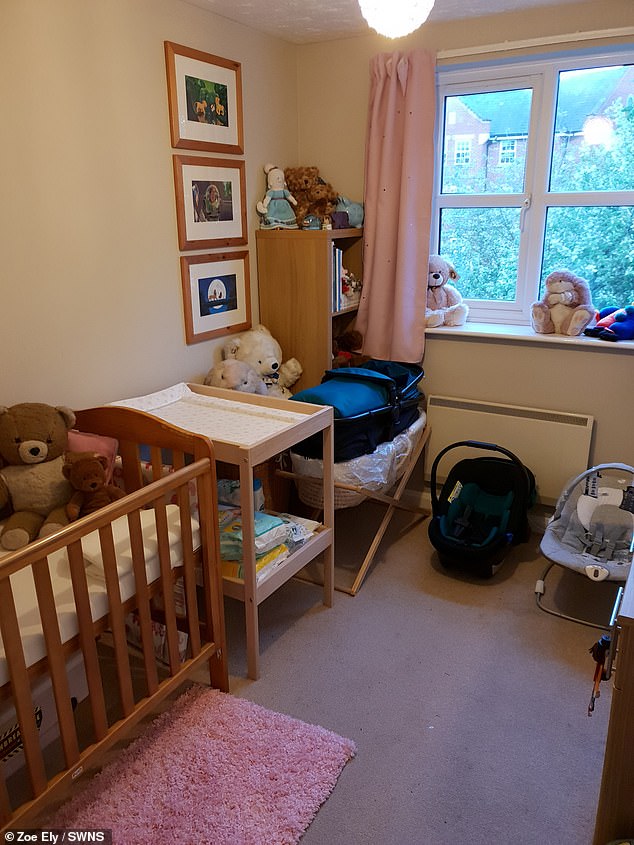 At first, Ms Ely blamed doctors for the loss of her baby. She believed an emergency  c-section could have saved Olive, however this is not routine care. Pictured, the prepared nursery 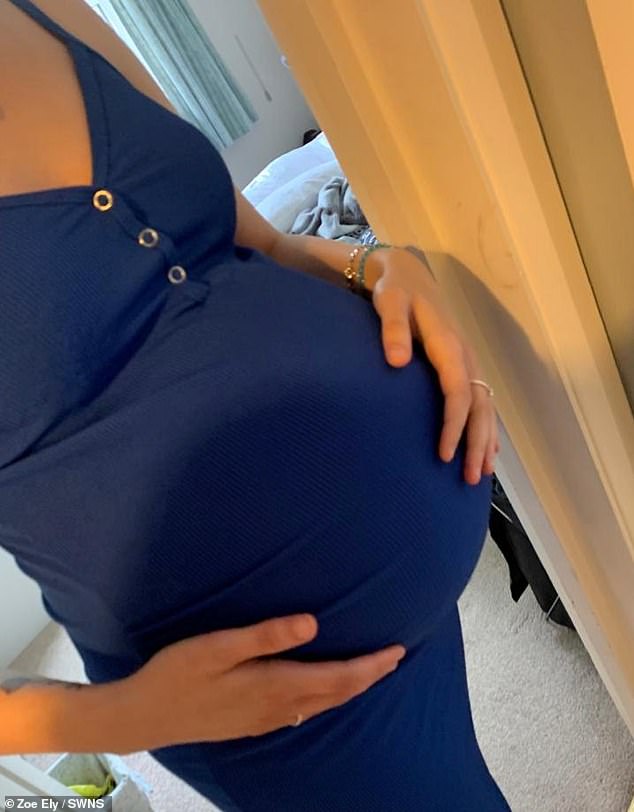 Around one in five pregnant women carries GBS, and there is a small risk it can be passed on to the baby during childbirth or in the womb. Pictured, Ms Ely’s pregnant stomach

Ms Ely believes Olive would have survived had the potential threat of GBS been taken more seriously when it was identified and she been delivered by emergency c-section.

She said: ‘If Olive had come out just a day earlier she would still have been poorly but she would have been treated in time and survived.

‘We would have her with us now but none of the doctors knew it needed to be done, which is why there needs to be more awareness.’

Sadly, a leading charity said although a C-section theoretically could have saved Olive, the death was ‘unavoidable’.

‘Although a baby dying without warning in the womb from GBS is very rare, most of these infections in newborn babies can be prevented.

‘This is a rare and tragic case which, could not have been avoided since there were no warning signs that the baby was unwell and no other indications for undertaking a Caesarean. 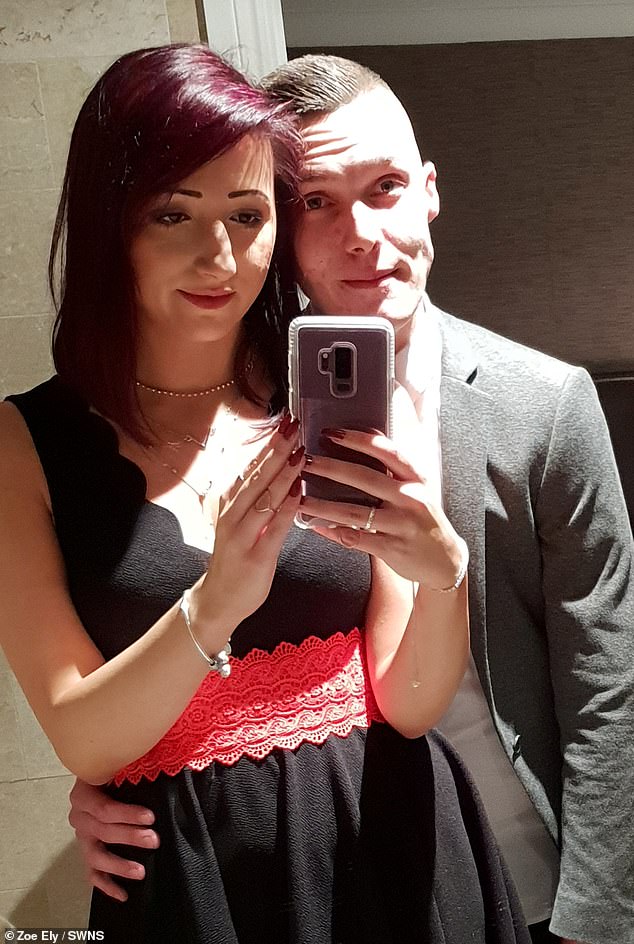 The couple racked their brains for nine weeks over what went wrong before the post-mortem came back, revealing their daughter had died of GBS complications 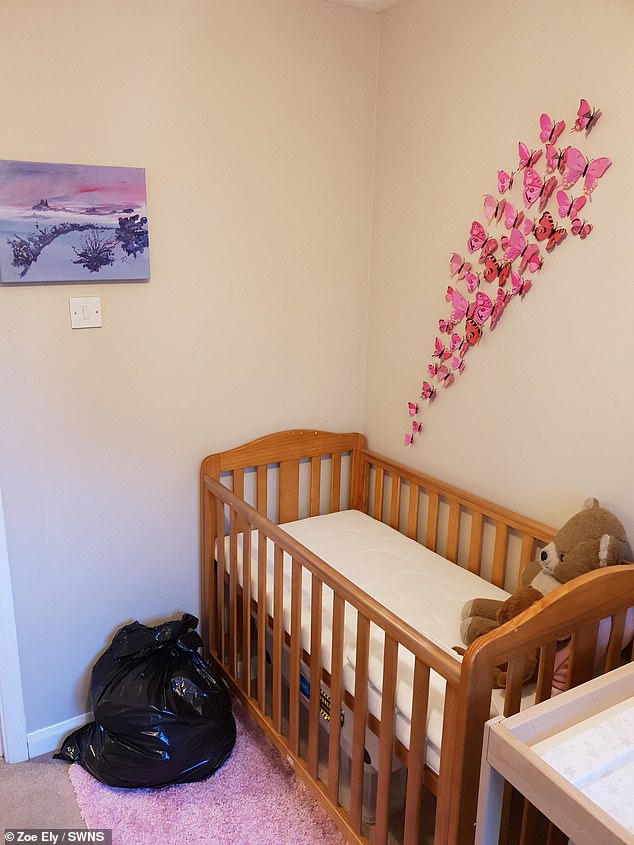 Ms Ely said: ‘They assured me the baby wouldn’t be affected in the womb, so when I found out she had I was angry’. Pictured, Olive’s room

‘Caesareans are not recommended as a means of preventing group B Strep infection in a baby both because they come with their own risks to the mother and her baby, and because the intravenous antibiotics in labour are both highly effective and safe.’

Ms Ely, who hopes to have another child in the future, said: ‘I want our story to serve as a warning to other people about the dangers of GBS.’

Since losing Olive, Ms Ely has been supported by a number of charities, which have helped her deal with the anguish.

She is currently raising money for the Stillbirth and Neonatal Death Society, baby loss charity Aching Arms and GBSS.

The couple shaved their heads this week to help with the fundraising drive, after the loss of Ovie caused Ms Ely to develop alopecia, a condition often brought on by stress or trauma.

For more information and support on GBS, contact Group B Strep Support.

Group B streptococcus (GBS) is a bacteria that is carried by up to 40 per cent of adults, usually in the gut, and 25 per cent of women in their vaginas, without typically causing symptoms.