A mother’s instinct saved her five-week-old baby after she rushed him to hospital when he refused to feed.

Baby Fletcher Faulkner, from Colne in Lancashire, initially did not show any typical signs of meningitis when his parents Sarah and Tom Faulkner, a credit controller, rang the non-emergency line 111 in the early hours of July 2 last year.

They became increasingly concerned after noticing he was making unusual grunting noises, as well as being overly clingy.

After being advised to take the youngster to hospital, the couple arrived to find a doctor would not be available for several hours.

Making the quick decision to take Fletcher to another clinic, the youngster was fighting for his life just six hours later.

After being transferred to a specialist unit, Fletcher, who also went into septic shock, spent a week in intensive care trying to overcome the infection.

His mother Sarah Faulkner, 33, an online marketing executive, said: ‘Hysteria started to set in and we were beside ourselves.’

Once fully recovered, Fletcher was allowed to go home on his mother’s birthday, which she described as the ‘best present ever’. His parents are now looking forward to celebrating Fletcher’s first birthday in May. 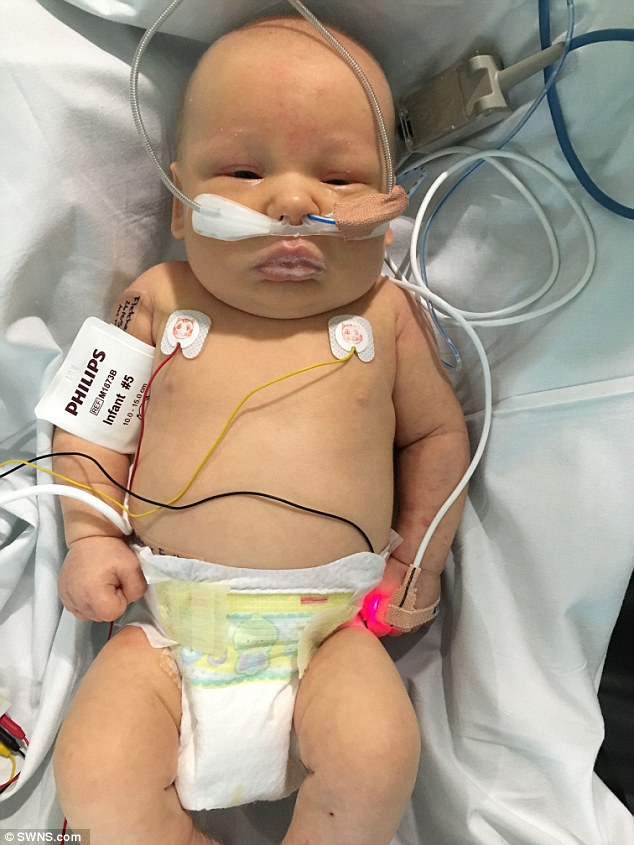 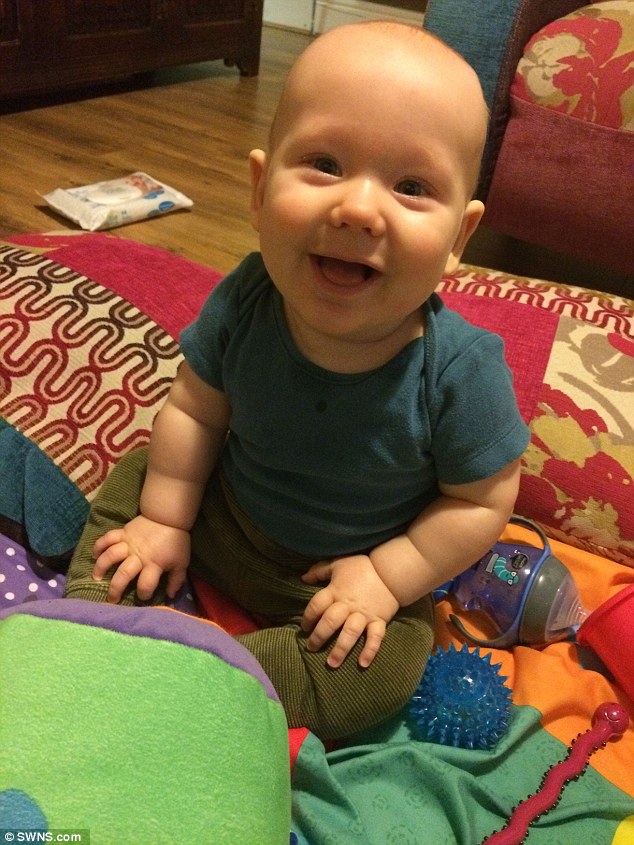 Now fully recovered, Fletcher (pictured at 10 months) will turn one-year-old in May

Diagnosed with meningitis and septic shock

The couple first became concerned when they put Fletcher to bed on the night of July 1.

By 4am, when Fletcher refused to take his milk, his parents were advised by the non-emergency line 111 to go to the local out-of-hours hospital.

Ms Faulkner said: ‘The GP couldn’t find anything wrong with him after she carried out routine tests and said the paediatrician wasn’t due in until 10am.

‘We took the decision to go to Blackburn and we’re so lucky we did because by 9am Fletcher had been diagnosed with meningitis and gone into septic shock.’

Just 20 minutes after the family arrived at Blackburn Hospital, Fletcher’s health had rapidly deteriorated and his temperature soared to 38.7 degrees.

The youngster was immediately put on a course of antibiotics. 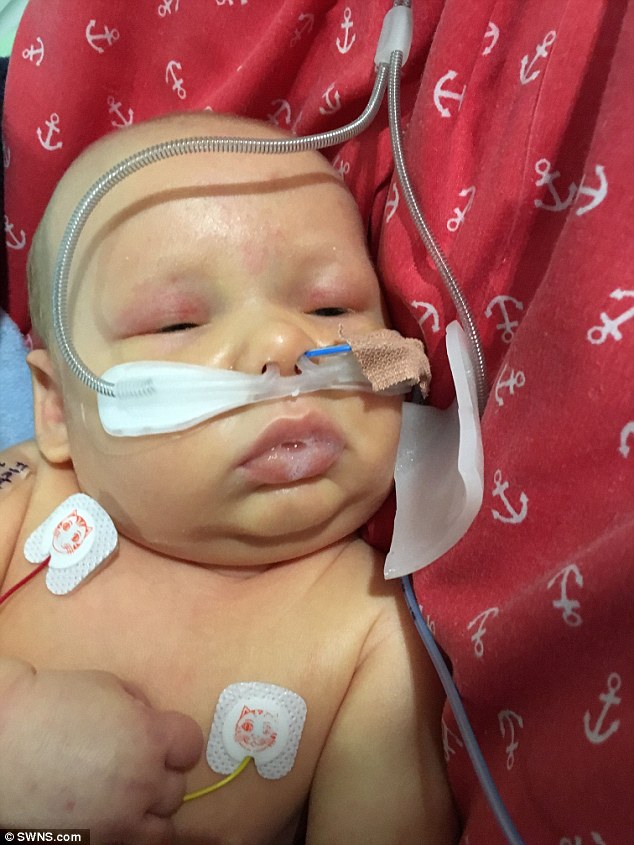 While unwell, Ms Faulkner said Fletcher swelled up ‘like a balloon’ and was covered in bruises 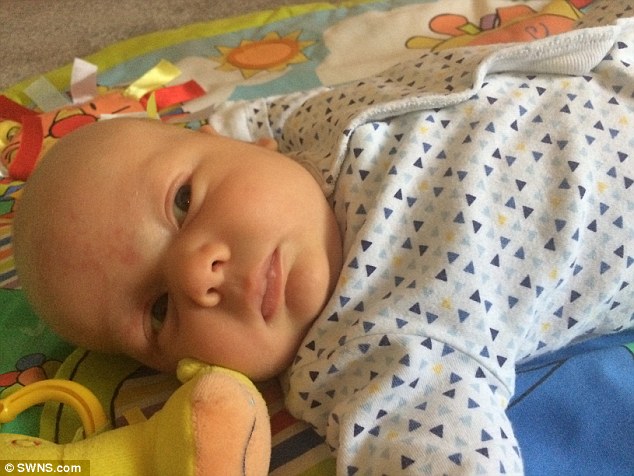 After days in intensive care, Fletcher began to recover (picture believed to be taken after)

‘Hysteria started to set in’

‘We were then told Fletcher would need a lumbar puncture and were asked to sit in the waiting room as it can be unsettling as the baby has to be put in an uncomfortable position, which isn’t nice for anybody.’

The stress of the procedure on Fletcher’s tiny body caused him to enter septic shock while doctors were preparing to put him to bed.

Sarah said: ‘We knew something was wrong because every nurse in the ward was running in the direction of Fletcher.

‘That’s when the hysteria started to set in and we were beside ourselves.

‘Our families had arrived at this point and we all just wanted answers but the doctors and nurses needed us to take a step back and let them look after Fletcher.

‘As a parent not being able to look after your baby is the hardest thing. I felt so helpless sat waiting just praying my baby boy was going to be okay.’ 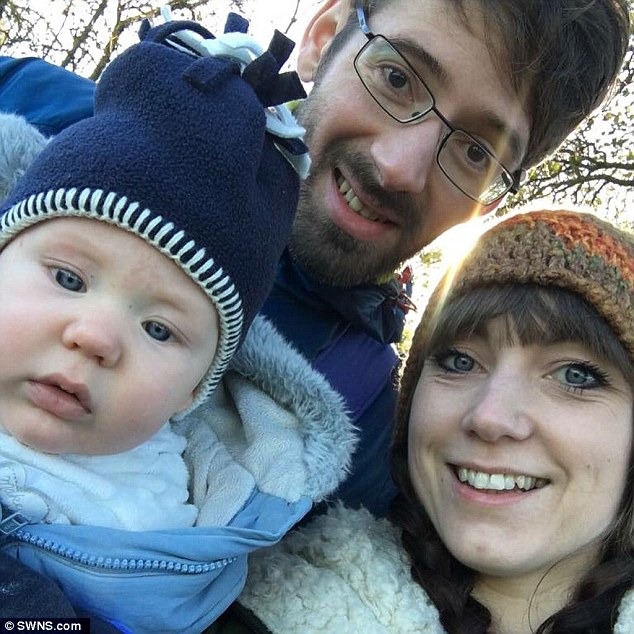 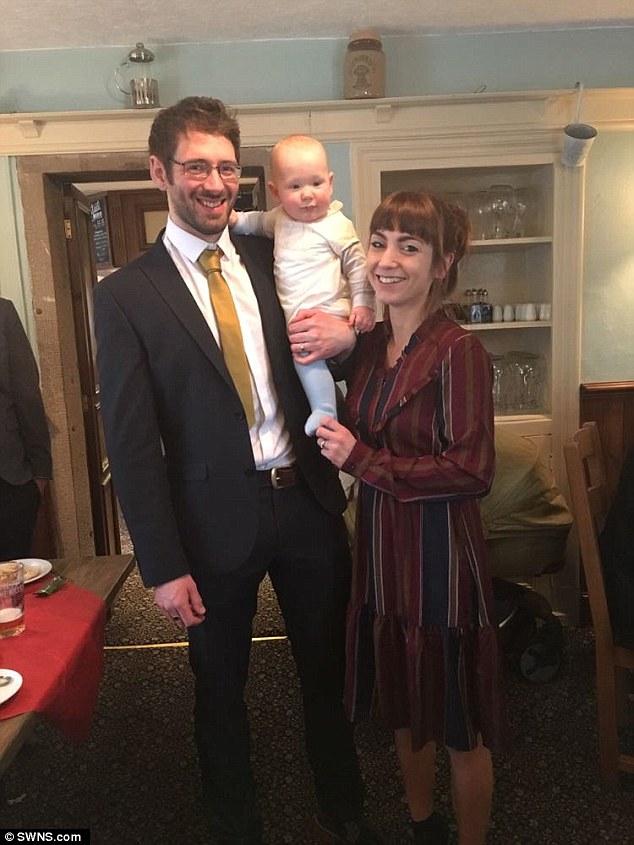 ‘Overwhelmed with relief’, his parents organised his christening over Christmas (pictured)

‘He looked so helpless’

Fletcher’s parents were finally allowed to see their son and were told he was going to be transferred to the specialist hospital Alder Hey in Liverpool.

Speaking of seeing her son after his ordeal, Ms Faulkner said: ‘It was awful seeing him lying there covered in tubes; he looked so helpless.

‘To see him suffering to a point where he was swollen up like a balloon was unbearable, he was covered in purple bruises.’

Once at Alder Hay, where he stayed for one week, Fletcher was placed in a private intensive care unit suite.

After a few days, his family were told he was starting to fight the infection.

Ms Faulker said: ‘When I was finally able to hold him again three days later it was like holding a newborn baby again; I was so overwhelmed with relief.

‘We all just finally let out the biggest breath that we had all been holding in.’