It’s common practice to put on a motivational playlist at the start of a workout.

But, new research suggests that doing this might not have the effect you were going for.

A new study has found that listening to motivational music does not improve overall performance during sports activities or exercise – but, the experts say it does make you more likely to take risks.

It’s common practice to put on a motivational playlist at the start of a workout. But, new research suggests that doing this might not have the effect you were going for. Instead, it may turn you into a risk-taker. Stock image

IS MUSIC A UNIVERSAL LANGUAGE?

A recent study has found global links between musical form and vocals, meaning that a love ballad will sound the same no matter what culture it originates in.

The Harvard-led research asked 750 internet users from 60 different countries to listen to 14-second excerpts from songs.

The songs traversed a variety of places from around the world and included tracks from less commonly heard societies, such as hunter-gatherers or cattle farmers.

Participants were then asked to answer six questions about how they perceived the songs, whether its purpose was for dancing or to express love, for instance.

Songs in the study could have also been linked to soothing a baby, healing an illness, mourning the dead or for telling a story – but only four types of song were actually present, according to researchers.

The data, after more than 26,000 excerpts were listened to, revealed an accurate description of the song’s function cross-culturally.

‘While the role of music in evoking emotional responses and its use for mood regulation have been a subject of considerable scientific interest, the question of how listening to music relates to changes in self-evaluative cognitions has rarely been discussed,’ said Dr Paul Elvers of the Max Planck Institute for Empirical Aesthetics, one of the study’s authors.

‘This is surprising, given that self-evaluative cognitions and attitudes such as self-esteem, self-confidence and self-efficacy are considered to be sensitive to external stimuli such as music.’

In the study, researchers investigated the effects of motivational music on 150 participants in a ball game.

The participants were split into three groups, with each required to complete a ball-throwing task, and fill out a questionnaire.

While doing this, they were tasked to listen to either music they’d selected personally, music selected by the experimenter, or no music at all.

They were also allowed to choose the distances to the basket themselves, with a monetary reward for points earned by successful shots.

The researchers found that there were no effects to their overall performance, whether positive or negative, linked to listening to the music.

But, it did increase risk-taking behaviour.

This was particularly the case in male participants and those who were allowed to choose their own music. 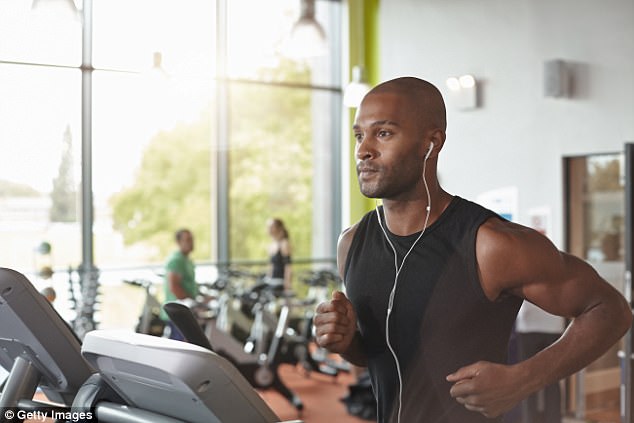 The researchers found that there were no effects to their overall performance, whether positive or negative, linked to listening to the music. But, it did increase risk-taking behaviour – especially in men. Stock image

‘The results suggest that psychological processes linked to motivation and emotion play an important role for understanding the functions and effects of music in sports and exercise,’ said Dr Elvers.

‘The gender differences in risk-taking behaviour that we found in our study align with what previous studies have documented.’

Still, the researchers say there is much more to be learned about the interplay of motivational music, self-enhancement, performance, and risky behaviour.

‘We gathered evidence of the ability of music to increase risk-taking behaviour, but more research is needed to improve the robustness of this finding,’ Dr Elvers said.

‘Additional research is also needed to address the potential mechanisms that may account for the finding.

‘We believe that music’s ability to induce pleasure as well as its function with respect to self-enhancement serve as promising candidates for future investigations.’