This is the terrifying moment a biker is knocked unconscious when an iron frame falls on his head as he passes a construction site.

The video was filmed in the Sultanpet area of Bangalore, India, as the 38-year-old rider, known only as Chandan, rode to his office on August 31.

His helmet flies off and he is left writhing on the ground while shocked onlookers rush to his aid.

The CCTV footage shows several people walking through the area just moments before Chandan’s horrific accident, including an elderly woman.

The biker then appears and slowly makes his way down the street,  passing a four-storey construction site.

The man, known as Chandan, was driving to his office when an iron frame fell from a construction site and struck him in the head

It is then that the frame lands on him, sending him crashing painfully to the ground.

He is left motionless and bleeding as horrified passers-by rush to help him.

Some can be seen reacting with visible shock and distress at the incident. A crowd gathers and tries to help the stricken man. 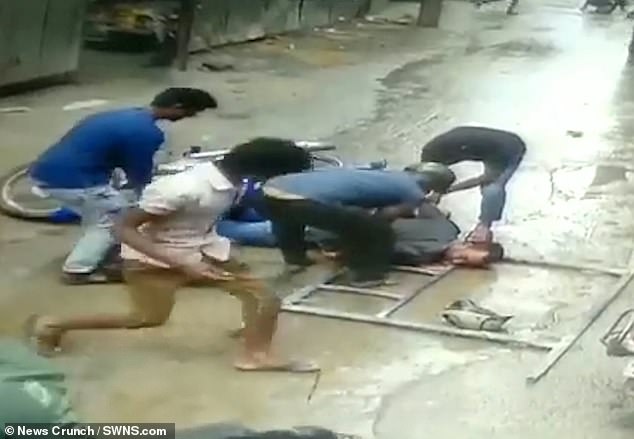 Many of them look up into the sky, seemingly pointing out the construction site the frame came from.

Chandan was then rushed to hospital.

His condition is said to be improving under the care of hospital staff, who say that he is now out of danger.

The Halsur gate police, who have jurisdiction in the area, are reported to have registered a case against the owner of the building.