‘Don’t perv and drive’: Distracted motorcyclist crashes into a car after taking his eyes off the road to shout ‘oh yeah’ at a group of women

A motorcyclist who slammed into a car after becoming distracted by a group of attractive women has sheepishly warned other riders not to ‘perv and drive’.

The motorcyclist, who had a camera attached to his helmet, was riding to work on Lytton Road in Brisbane when he spotted the group at a traffic light.

Footage captured the moment he turned his head to shout out ‘oh yeah’ to the women, only to slam into the back of a car after traffic stopped ahead of him.

The impact flipped his bike over and sent his body flying onto the ground.

He could be heard repeatedly shouting ‘f***’ while glancing back at the women to see if they noticed the embarrassing incident.

The motorcyclist, who kept his identity anonymous, shared the video on Dash Cam Owners Australia under the title: ‘Don’t perv and drive.’

He said the accident happened a few years ago.

‘Figured it’s about time I upload this for everyone else to laugh and learn,’ he wrote.

‘Totally my fault. We both had insurance, it was all sorted smoothly. ‘ 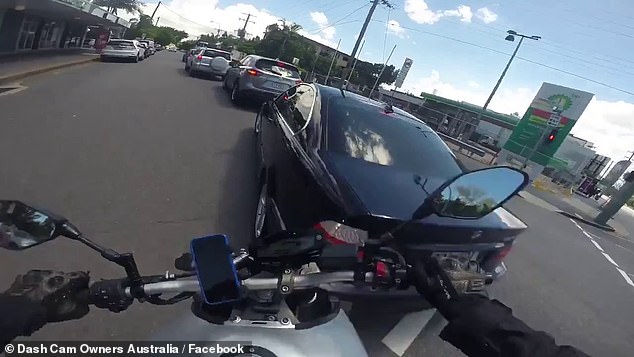 After he shouted ‘oh yeah’ at the group, he turned his focus back to the road but traffic had unexpectedly stopped and he crashed into the back of a black car 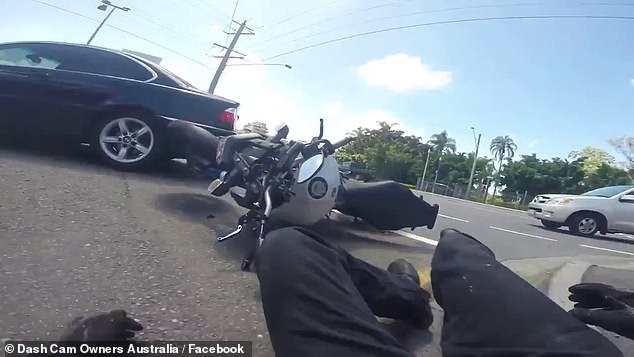 The impact flipped his bike over and he smashed onto the ground, but as he got back to his feet, continuously yelling ‘f***k,’ he looked back at the women to see if they noticed the embarrassing incident

Many people found the video funny, while some joked at the expense of the motorcyclist.

‘Crashes bike, still looks around for another look,’ one man wrote.

‘I think he got hurt more from embarrassment than the crash,’ another said.

‘He technically got some tail just not the one he wanted,’ joked a third.

Not everyone found the crash humorous, with one woman slamming him for taking his eyes off the road.

‘Looks to me you took your eyes off the road to check out some sheilas and that’s what happens,’ she wrote.

‘In a split second, lives can be taken. You were very lucky. Some don’t get home to their families.’