What a plank! Moment motorist smashes traffic lights as they drive through German town with towering wooden poles sticking out of car trailer

This is the bizarre moment a driver smashes traffic lights while driving stacks of wood in their trailer in a small countryside town in Germany.

In the clip, the vehicle is seen gently driving along a road in Schliersee, Bayern, with wooden poles balanced on their side.

Their journey appears to be going smoothly with the towering wooden beams leaning outwards from the car, in the video shared to Reddit yesterday. 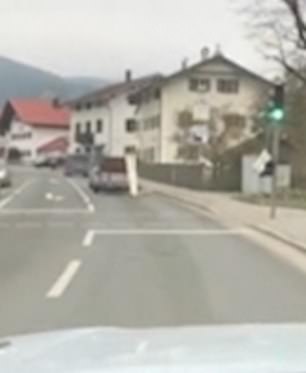 A motorist was filmed driving with wooden poles in the back of their trailer in Schliersee, Bayern, Germany

As the vehicle slowly passes houses, the poles manage to narrowly miss scraping against their exterior.

Moments later, the car heads towards a set of traffic lights and the wooden planks whack into them.

The end of the beams, which are leaning out of the trailer, smack the side of the lights and send part of the structure plummeting to the ground. 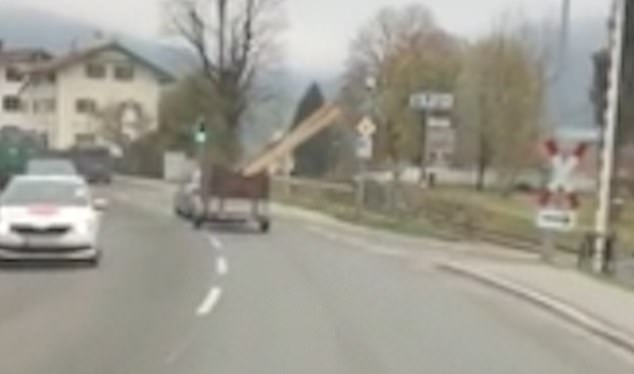 The wooden poles then flip backwards on to the road, in the dash-cam footage.

But despite the dramatic drop, the vehicle continues to drive as though nothing has happened.

People have shared their bafflement about the moment on Reddit. 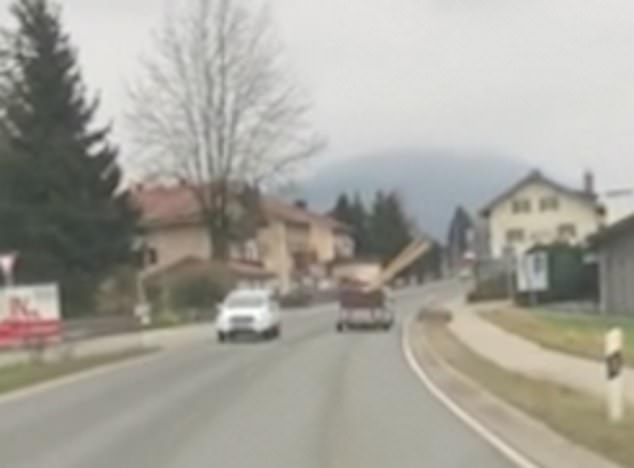 Social media users have said the driver’s ‘common sense failed to load’ as they made the steep climb and drove along narrow roads with wooden beams sticking out of the back. Meanwhile others have joked ‘what happens in Bavaria, stays in Bavaria’

SockRuse said: ‘I’m just gonna go ahead and say it, I was satisfied by the end because the person actually experienced the consequences of their stupidity.’