A family’s home has become the latest casualty in the horror mice plague gripping New South Wales after the rodents chewed through wiring and sparked a massive fire that burned the house to ashes.

The Ward family found their home in Gwabegar, near Narrabri in north eastern New South Wales ablaze on Friday, May 21.

Mother-of-three Rebekah Ward said the mice had ‘gone into the roof of the house’ and sparked the fire, which they desperately battled to put out. 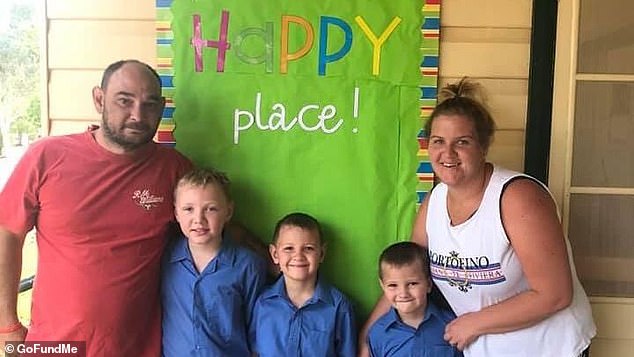 The Ward family (pictured) found mice ‘flying’ off their roof on Friday, May 21 as home was ablaze

‘They were eating the walls, the wiring in the roof. That is how the police said the fire started,’ she told the Daily Telegraph.

The aged care nurse said the rodents were seen ‘flying’ off her family’s property in a desperate attempt to escape.

‘The policewoman there said that she had seen mice flying out of the roof trying to get away from the flames,’ she said.

Neighbour Mark Adams rushed over to the burning property and saved ‘Little Miss’ the family pug and ‘Lexie’ the cat. 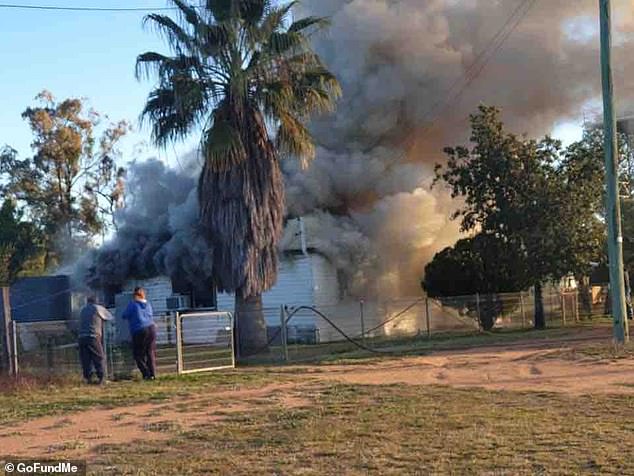 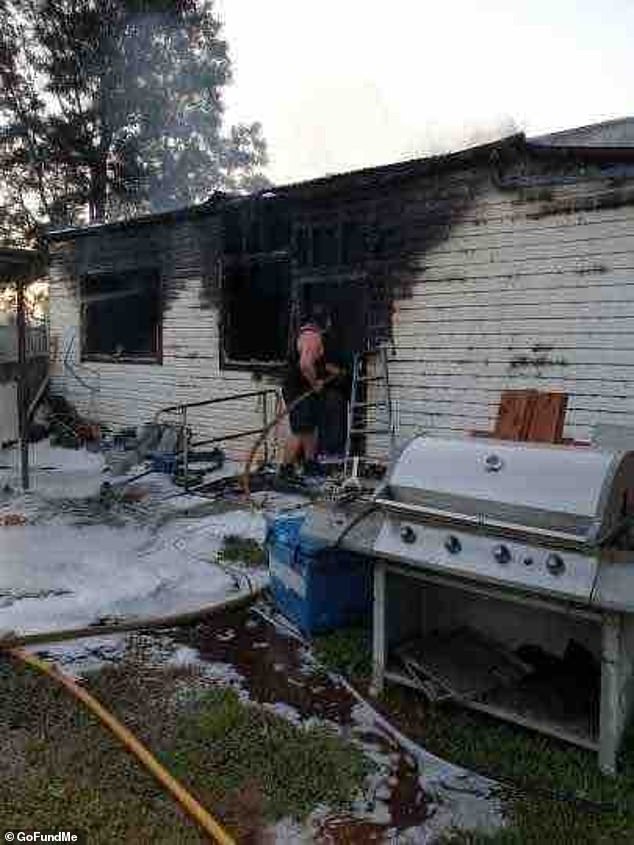 The Ward family found their home in Gwabegar near Narrabri in north eastern New South Wales ablaze on Friday, May 21 (pictured) 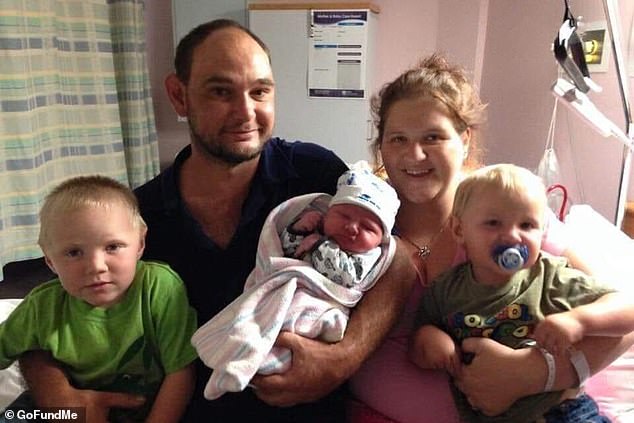 Rebekah Ward (pictured, right, with her partner and children John, Charlie and Oliver) said the rodents were seen ‘flying’ off her family’s property in a desperate attempt to escape.

Mrs Ward’s three sons John, 12, Charlie, 9, and Oliver, 7 stood alone in their front yard –  the footy gear they were wearing the only possessions they had left.

The devastating fire comes after the family were already forced to pack clothes and essential food into sealed boxes to protect them from the oncoming rodents.

The brothers even resorted to bunking together after one of them was bitten by a mouse while sleeping.

But the rodents returned after nearly a two month absence – leaving the family devastated. 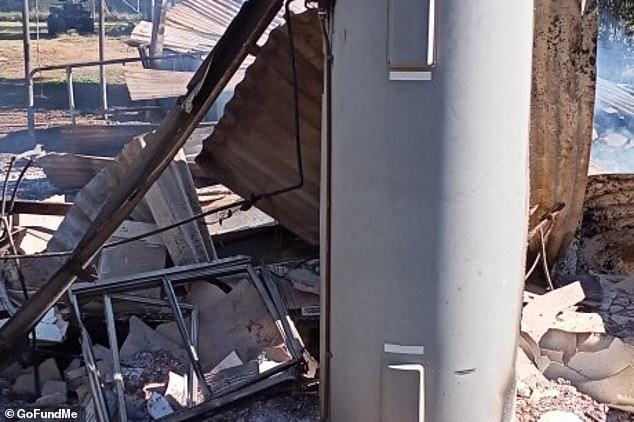 The family’s home was left completely destroyed by the raging blaze, leaving them homeless (pictured) 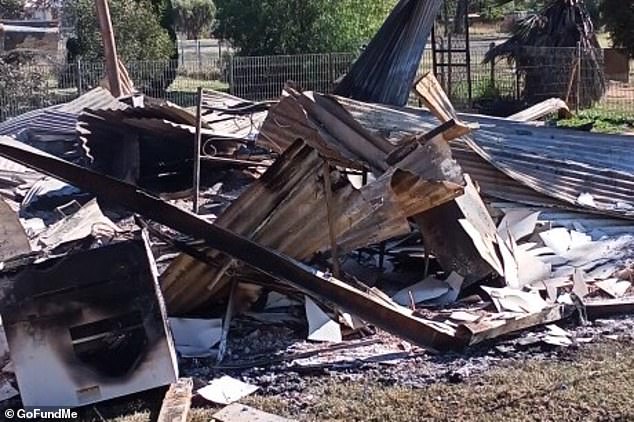 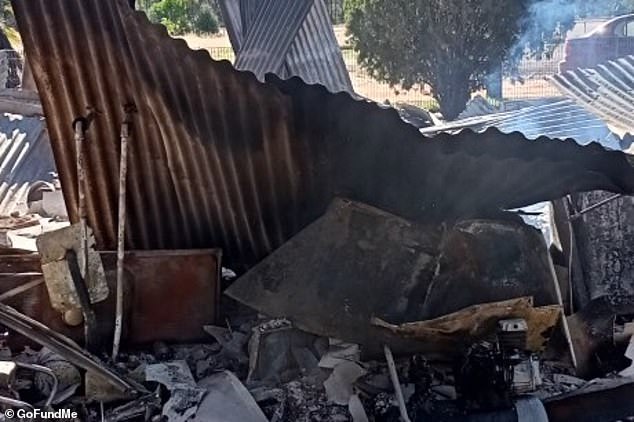 ‘The house is rebuildable, but we lost everything else, baby pictures of the kids,’ Ms Ward said.

The blaze comes after another famer’s tractor was set alight by mice that chewed through the wiring.

Farmer Matthew Madden said ‘smoke just billowed out’ of the vehicle when he attempted to start it.

‘You go into your shed and you’re just hoping that whatever piece of machinery you have starts because the mice have just been eating through the wiring and there is nothing you can do to stop them,’ Mr Madden said. 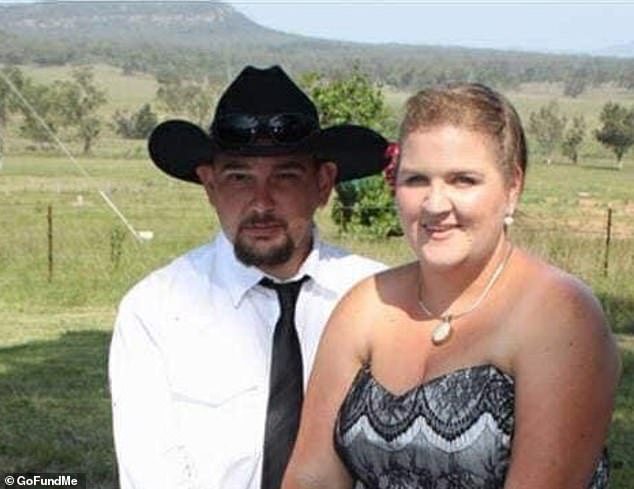 This comes after the extent of Australia’s revolting mouse plague was revealed in an alarming new map by the CSIRO.

Stretching for over 1,000km from southeast Queensland to the New South Wales-Victoria border, the online platform called Mouse Alert, shows a swath of red circles indicating a high number of rodents.

The east coast of Australia has been inundated by the unwanted visitors this Autumn with cooler weather and high crop yields creating perfect conditions for the pests to thrive.

According to the the national science body, the worst hit areas have been the Northern Tablelands, Central West and New England regions of NSW, but there has been speculation the plague could reach even Sydney in coming months. 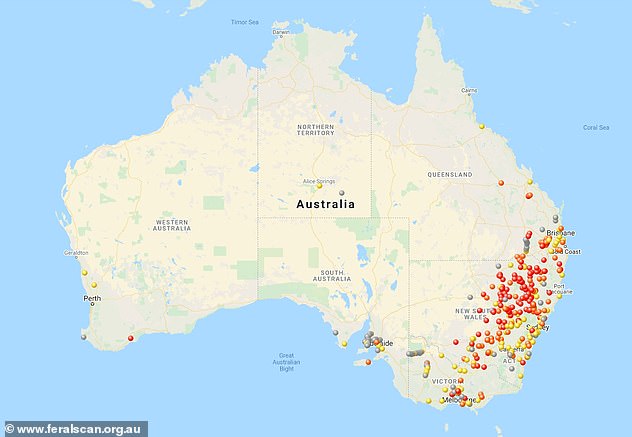 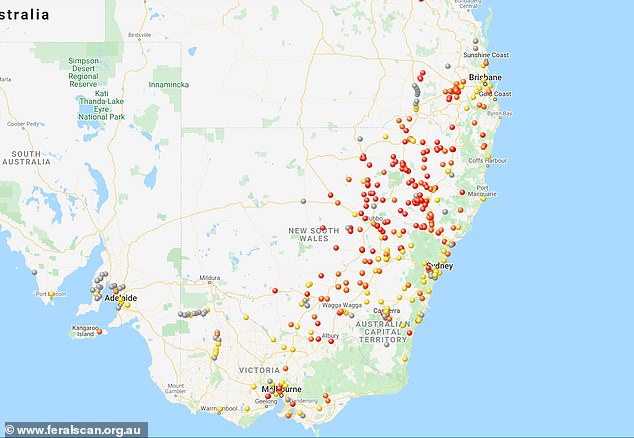 Stretching for over 1000km from southeast Queensland to the New South Wales-Victoria border, the online platform called Mouse Alert (pictured), shows a swath of red circles indicating a high number of rodents

The map shows particular concentrations of the mice around Narrabri, Coonabarabran and Moree.

To gain control of the problem, the CSIRO and the Centre for Invasive Species Solutions, say it’s important for members of the community to record observations through Mouse Alert.

‘Mice are a significant problem in Australia, causing severe economic, social and environmental damage during plagues,’ the website said.

How to stop mice breeding in urban areas