Move over, Niagara! These British waterfalls can’t be matched for beauty

A countryside trek under a torrent of rain can dampen the enthusiasm of even the hardiest walkers – but to experience some of Britain’s best waterfalls at their most powerful, well, you’re going to have to get wet.

A short, heavy shower is what you’re hoping for, as it will swell the water upstream, transforming falls into ferocious cascades.

And have you ever wanted to walk behind a torrential waterfall? At the veil-like Sgwd yr Eira (Fall of Snow) in Wales you can do just that. It’s in a corner of the Brecon Beacons nicknamed ‘Waterfall Country’ and part of the popular Four Falls Trail, a 5.5-mile path loop taking in a quartet of impressive, distinctive drops. Heard well in advance, the deafening clatter of Sgwd Clun-Gwyn is also memorable (breconbeacons.org).

Splash down: Corra Linn, one of the four stunning Falls of Clyde in Lanarkshire. They were said to have helped romantic poet Samuel Taylor Coleridge define the ‘precise meaning of the words grand, majestic [and] sublime’ 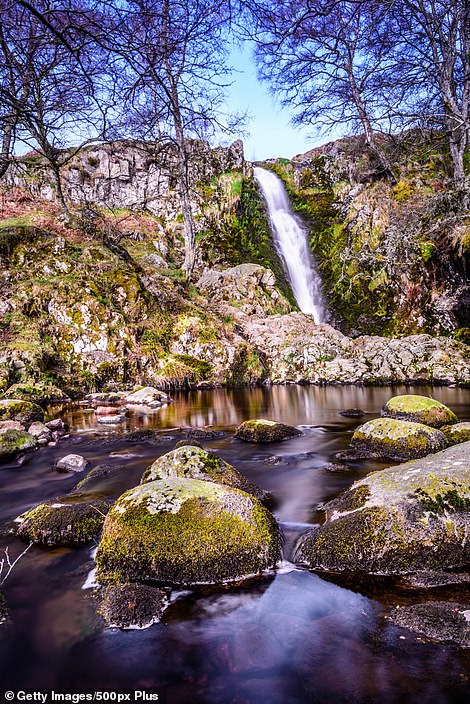 Where some falls go in for drama and din, the graceful Whitelady Waterfall in Devon simply glides quietly down a 92ft rock face. Its name supposedly refers to the alabaster gown worn by its resident ghost. While her appearance is not guaranteed, you will see misty ferns and mossy rocks as the River Burn drops into steep Lydford Gorge, just northwest of Dartmoor National Park.

For somewhere to rest your weary bones, family-run Lobhill Farmhouse offers Aga-cooked breakfasts and colourful bedrooms as well as an award-winning vineyard. B&B from £88 a night (lobhillbedandbreakfast.co.uk).

The mood is equally romantic at Cumbria’s Dungeon Ghyll Force – from ‘foss’, the Viking word for waterfall – which the poet William Wordsworth evocatively describes in The Idle Shepherd Boys: ‘The gulf is deep below: and in a basin black and small/receives a lofty waterfall.’

Part of a spindly river in the oh-so-photogenic Langdale area, this 39ft plunge is more restrained than Lake District rival Aira Force, but arguably prettier, thanks to a cavern backdrop, and is definitely less crowded.

Either amble up from the Stickle Ghyll car park or let Dungeon Ghyll Force be the penultimate stop of a seven-mile Langdale Pikes circular – a classic, bumpy dose of fell-walking (alltrails.com). Then return to log fires and hearty suppers at the New Dungeon Ghyll hotel. B&B from £55 per night (dungeon-ghyll.co.uk).

Britain’s tallest waterfall is Eas a’ Chual Aluinn, a remote wisp in Scotland’s north-west. Almost four times the height of Niagara Falls, it splatters roughly 650ft down a sheer, slate-grey cliffside. Snow-sloshed peaks loom above, while heather and scree cover the glen. It’s a tough six-mile trek to the summit, which involves boggy, rocky and slippery terrain (walkhighlands.co.uk), but look out, too, for Eas an t Strutha Ghil, taller still but too patchy to be called a waterfall.

Far easier, and expected to resume in April, are day cruises that pass close by and usually encounter seals (£30, kyleskuboat tours.com). The cruises depart from fishing village Kylesku’s namesake lochside hotel, where boutique-style B&B costs from £140 a night (kyleskuhotel.co.uk).

A high-volume, camera-delighting gush ensures High Force in the North Pennines remains popular, helped by its easy accessibility, visitor centre and car park. The renowned cataract (a waterfall with a series of drops) is a 70ft knockout as the River Tees tumbles through two rock-carved chutes into a beckoning pool. 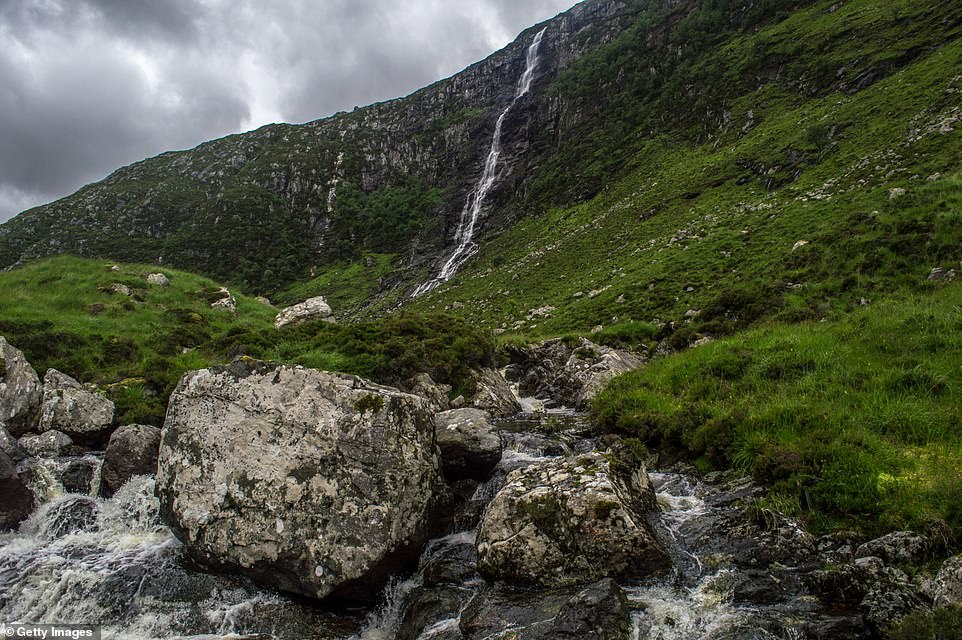 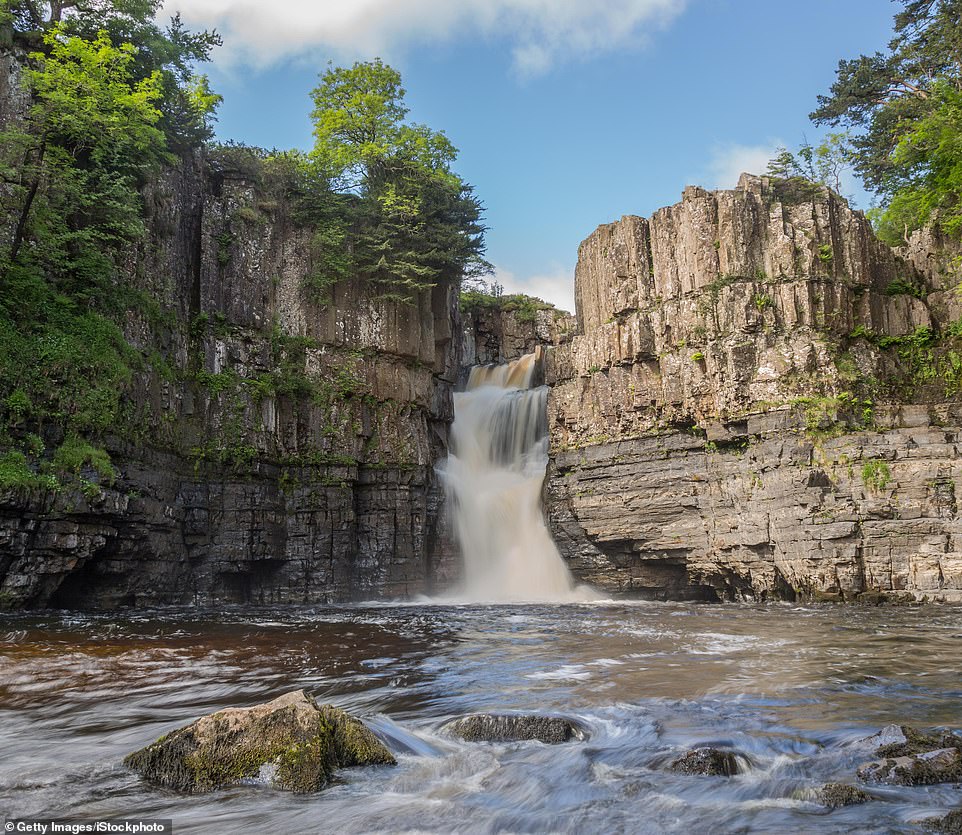 High drama: The fierce cascade of High Force in the North Pennines. The renowned cataract (a waterfall with a series of drops) is a 70ft knockout as the River Tees tumbles through two rock-carved chutes into a beckoning pool

The perfect guide to the area is Cheryl Robinson, co-owner of Romaldkirk’s Rose & Crown – a hip but homely coaching inn, all flagstone floors and local-produce dinners – who has road-tested hundreds of local hikes. B&B from £125 a night (rose-and-crown.co.uk).

Head to North Yorkshire and decorating a limestone gorge within the ancient Green Dragon Inn’s large grounds is Hardraw Force (entry is £4, hardrawforce.com). 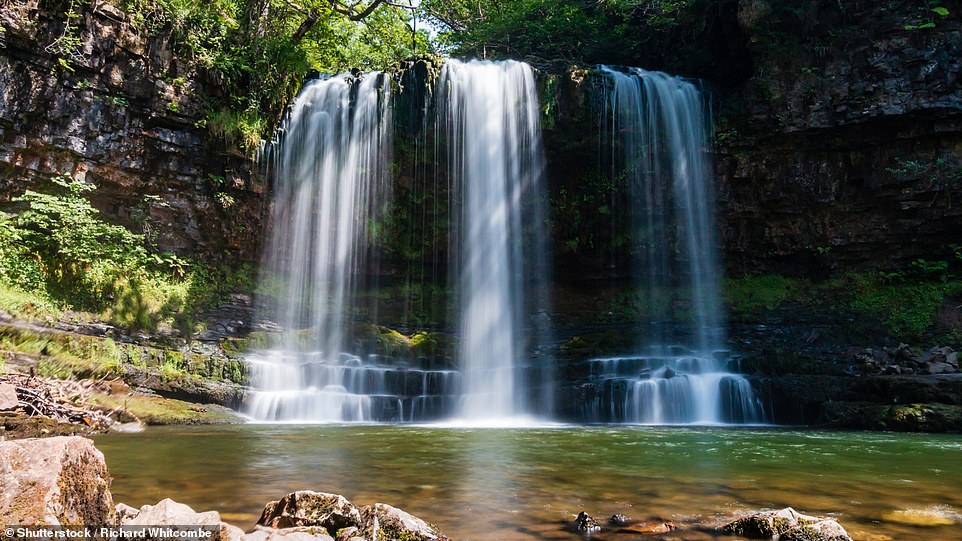 Sgwd yr Eira (Fall of Snow) in Wales is part of the popular Four Falls Trail, a 5.5-mile path loop taking in a quartet of impressive, distinctive drops

This svelte, 100ft spout inspired a J. M. W. Turner painting now displayed in Cambridge’s Fitzwilliam Museum. But its chief claim to fame is an appearance in the 1991 film Robin Hood: Prince Of Thieves, where its star Kevin Costner showers au naturel. Further down cheese-making Wensleydale valley, the stepped ledges of Aysgarth Falls hosted the film’s dust-up between Robin and Little John.

Stay close to the waterfall at The Green Dragon, which offers two 16th Century luxury suites with antique furnishings and roll-top tubs. B&B from £140 a night (thegreendragoninnhardraw.com).

The Falls of Clyde, four wide waterfalls in Lanarkshire, were said to have helped romantic poet Samuel Taylor Coleridge define the ‘precise meaning of the words grand, majestic [and] sublime’. Two centuries later, such adjectives still apply. Take the path which shadows the Clyde’s gorge from the village of New Lanark or, for a real challenge, keep going: this route begins the 40-mile Clyde Walkway to Glasgow (walkhighlands.co.uk). 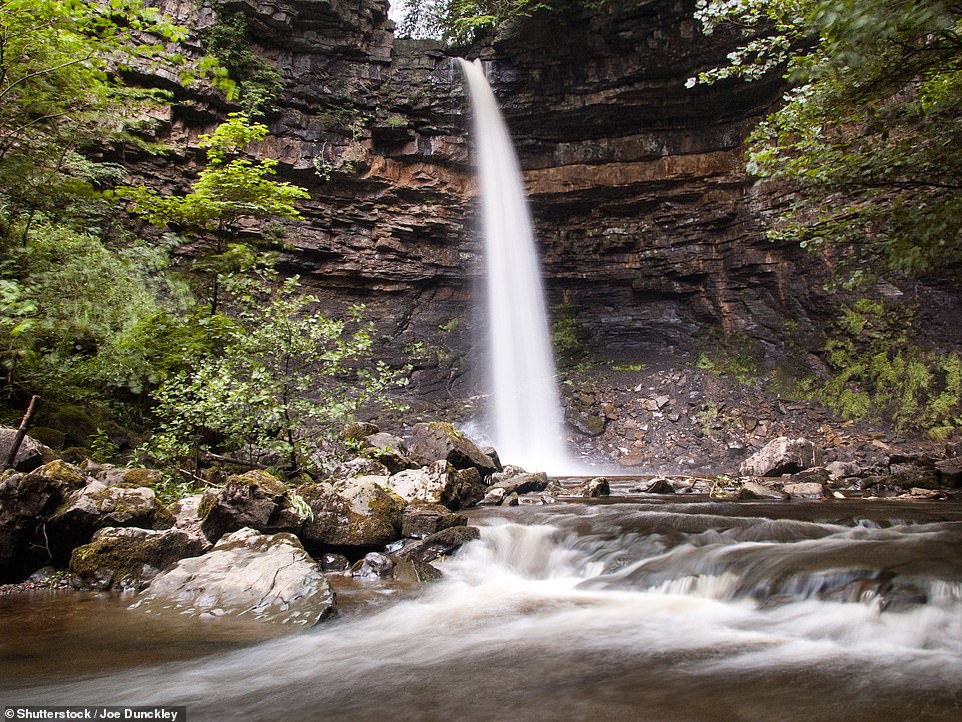 Give your legs – and your four-legged friends – a rest by bedding down in the stone-built riverside cottages at New Lanark Mill Hotel. Two nights’ self-catering for two (plus two dogs) from £135 (newlanarkhotel.co.uk).

Wild-swimmers should head south to Northumberland’s National Park where the lovely Linhope Spout nosedives 59ft into a deep circular pool. After a two-mile stroll from Hartside Farm, paths serve the Spout’s top and bottom (northumberlandnationalpark.org.uk).

Dry off at Ingram House, a stately former farmhouse in the Breamish Valley, which has red squirrel-patrolled gardens, a summer house for stargazing and acclaimed dinners on request. B&B doubles from £85 a night (ingram-house.com).