Move to help Tasmanian Devils by introducing them to island backfires as 6,000 penguins wiped out

A project to move endangered Tasmanian devils to a remote Australian island has backfired after the hungry marsupials wiped out thousands of penguins.

Tasmanian devils, one of Australia’s most famous indigenous species, have gobbled up thousands of little penguins (Eudyptula minor) on Maria Island.

About 28 Tasmanian devils were moved to the 44-square-mile island – which is just east of mainland Tasmania – between 2012 and 2013 to ‘safeguard’ the species.

It was thought a facial tumour disease – a fatal cancer spread through biting – would decimate populations of the devils on the Tasmanian mainland.

But the Tasmanian devil population has since grown to more than 100 there and the beasts have proven to have an insatiable appetite.

There were about 3,000 penguin breeding pairs on the island, according to conservation charity BirdLife Tasmania, before the devils were introduced, but this number tragically now stands at zero.

Tasmanian devils, which weigh up to 8 kilograms (18 pounds) and have a black or brown coat, typically prey on other native animals or scavenge carcasses 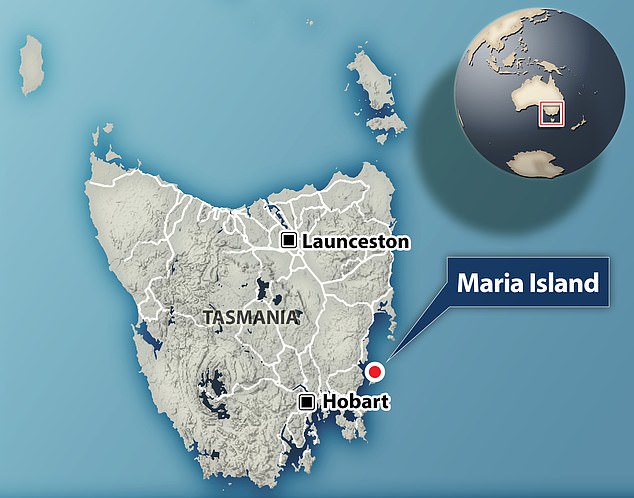 Maria Island is a 44-square-mile island east of Tasmania, Australia’s island state, which lies south of the mainland

The dramatic fall in penguin numbers on Maria Island was discovered by rangers and BirdLife Tasmania was made aware of the discovery.

‘All of the colonies of penguins once nesting around the Maria Island foreshore are gone because of the devils,’ Eric Woehler, a convener for BirdLife Tasmania, told The Australian newspaper.

‘Parks and wildlife rangers went out 18 months back and couldn’t find a single penguin breeding in any of the previously known penguin colonies on the island. 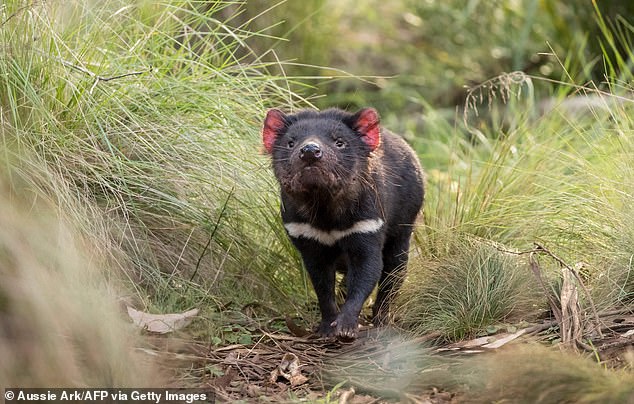 A plan to relocate 28 Tasmanian devils to Maria Island off Tasmania’s east coast has backfired after the species wiped out its 6,000-strong penguin population (file image)

‘So, the devils have wiped out the penguins. It’s 100 per cent. There seems to be a degree of reluctance to let people know what’s going on.

He said the carnivores also ravaged geese and native hen populations on the island.

‘The rationale for still having a population on an island where they’ve had catastrophic impacts on the native fauna is rather difficult to justify,’ he said. 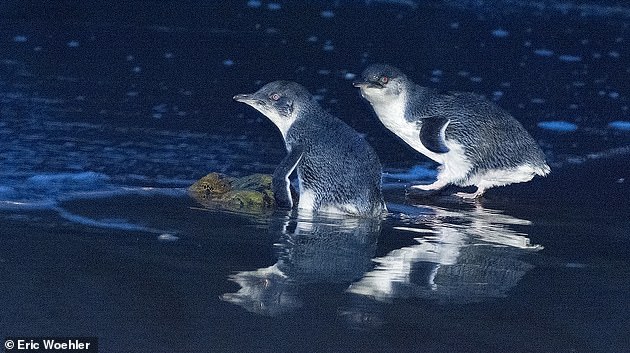 Little penguins (Eudyptula minor) are the smallest species of penguin. The species grows to an average of 13 inches in height 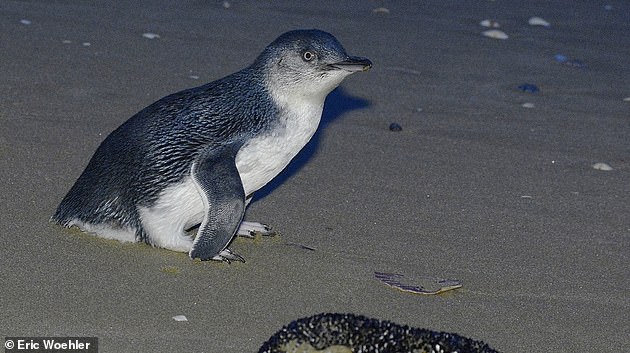 There were about 3,000 penguin breeding pairs on the island, according BirdLife Tasmania, before the devils were introduced, but this number now stands at zero 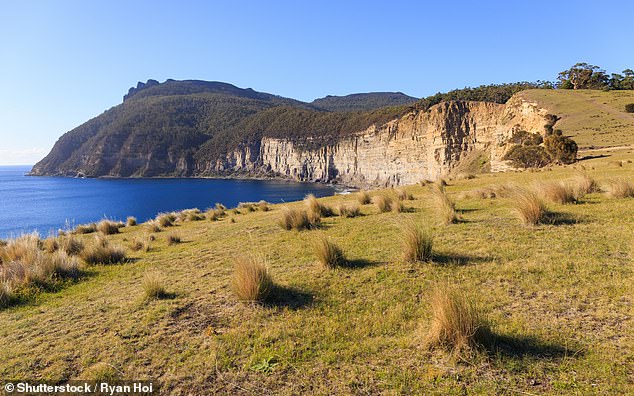 View of the Maria Island National Park in Tasmania. Conservation organisation BirdLife Tasmania said the 28 devils have had a ‘catastrophic impact’ on the island’s four known penguin breeding colonies

BirdLife Tasmania appeared to have originally advised authorities against the plan to transfer the marsupials to Maria Island – ‘We warned of this,’ it tweeted on Monday.

A spokesman for the Tasmanian government told The Australian it ‘continually monitors, evaluates and reviews the devil population’. 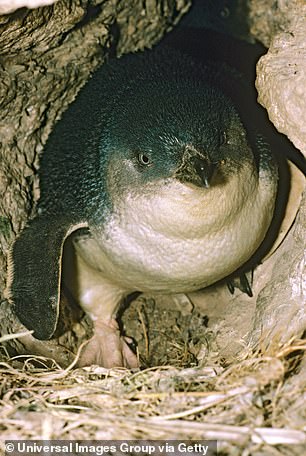 Pictured is a little penguin (Eudyptula minor) on Maria Island

The government-backed Save the Tasmanian Devil program would ‘evolve with new knowledge in science and emerging priorities’, it said.

‘This also applies to Maria Island, where active monitoring and management occurs.

‘Maria Island remains an important part of the broader devil program to help restore and maintain an enduring and resilient wild devil population in Tasmania.’

Last year, a report in Biological Conservation said the Tasmanian devils on the island has also ‘eliminated’ colonies of shearwater, a type of long-winged seabird, more effectively than either cats or possums.

Woehler also told the Australian that shearwater populations have ‘also been hammered’.

Fortunately, the range of the little penguin spreads throughout much of mainland Australia, along the south coast, as well as New Zealand.

The IUCN Red List, which lists the global conservation status of different species, has little penguin populations listed as ‘stable’.

It also lists the status of Tasmania devils as ‘endangered’ and populations as ‘decreasing’ – which is a more severe categorisation. 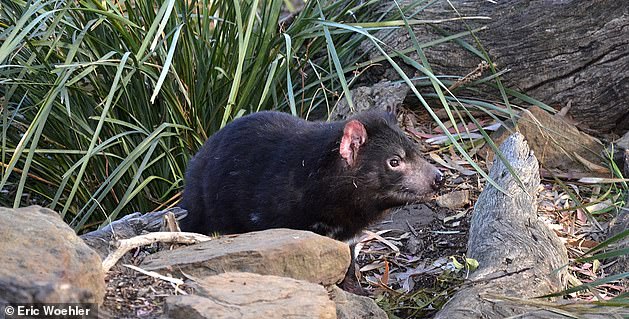 Tasmania devils were threatened by a fatal cancer — dubbed Tasmanian devil facial tumour disease. It’s spread by biting and causes masses to develop on the animals’ face and in the mouth

While little penguins on the island have been decimated, the Tasmania devils seem to be making a comeback.

Last year, a report published in the journal Science revealed facial tumour disease that was devastating the population now showing signs of petering out.

As the name suggests, the fatal cancer causes ugly tumours to develop on the animals’ face and in the mouth, usually causing death.

The rate of reproduction, the study authors explained, is now around one – meaning that each infected devil is passing the cancer on to one or less of their peers.

‘It is cautiously optimistic good news,’ said paper author and biologist Andrew Storfer of the Washington State University at the time.

‘I think we’re going to see continued survival of devils at lower numbers and densities than original population sizes.’

‘But extinction seems really unlikely even though it was predicted a decade ago.’

Tasmanian devils, which weigh up to 8 kilograms (18 pounds) and have a black or brown coat, typically prey on other native animals or scavenge carcasses.

The animals are known for their extremely loud growl, powerful jaws and ferocity when confronting rivals over food or mates. 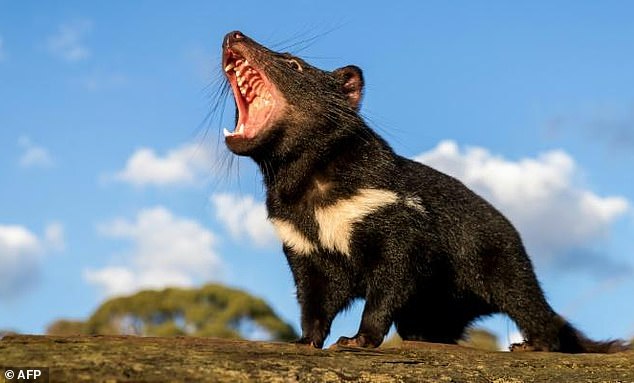 Tasmanian devils have been extinct on Australia’s mainland for thousands of years. The mammals have a black or brown coat and typically prey on other native animals or scavenge carcasses

It is estimated that fewer than 25,000 Tasmanian devils still live in the wild, down from as many as 150,000 before the mysterious, fatal disease first struck in the mid-1990s.

On Australia’s mainland, they are believed to have been wiped out by packs of dingoes – wild dogs native to the vast continent – an estimated 3,000 years ago.

But because dingoes are absent from Tasmania, the devils survived on the island state and remain there today.

Last month, a historic conservation project introduced the devils to Australia’s mainland for the first time since they died out there 3,000 years ago.

Conservation groups released 26 of the carnivorous mammals into a 400-hectare (1,000-acre) sanctuary at Barrington Tops, about 3.5 hours north of Sydney.

Aussie Ark, an animal preservation project, selected the reintroduced devils for their breeding suitability, placing them in the sprawling, fenced area in the hopes of warding off threats to their survival including feral pests, noxious weeds and cars.

‘We’ve put young, healthy devils in, we put them in now which gives them the best part of six months to settle, find their territory (and) prepare for breeding,’ which usually occurs in February, said Tim Faulkner, president of Aussie Ark.

WHAT ANIMALS GET CANCER?

Cancer seems to affect all animals but is difficult to study in wild populations due to them frequently moving around.

The species most commonly affected include:

An unusual form of cancer has driven Tasmanian devils to become an endangered species in their native Australia.

Unlike most cancers, which arise through genetic mutations, Tasmanian devil facial tumor disease (DFTD) is transmitted between the animals via biting, aggressive mating or sharing food.

DFTD most commonly occurs on the face or mouth but can spread anywhere in the body.

Nearly all affected animals die within six months due to an inability to eat or the disease spreading. 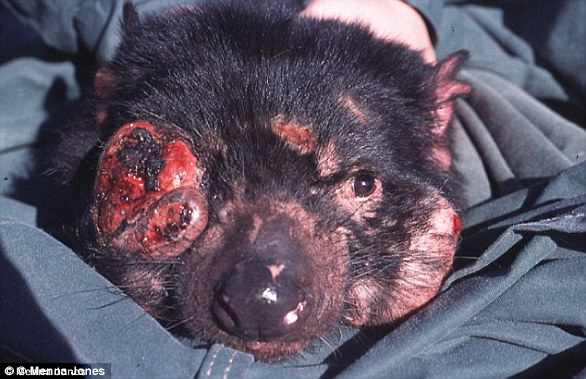 Image shows a Tasmanian devil affected by a facial tumour, which are usually deadly 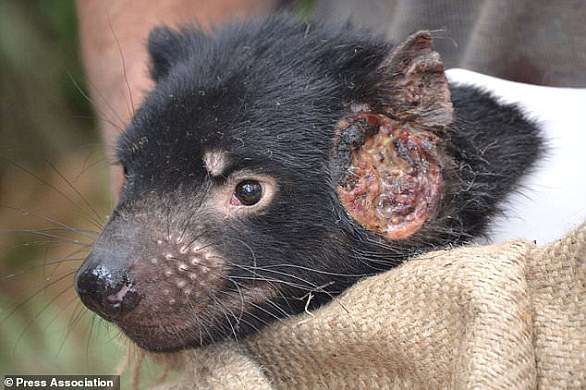 Breast cancer is the most common form of the disease in female dogs.

Cancerous tumours nearly always result in the animal’s death, even with treatment, due to them spreading.

The majority of dog breast cancers are discovered during routine examinations by vets, however, owners may notice:

Causes may be hormonal, genetic or dietary related.

Obese dogs appear to be more prone to breast cancer than their fitter counterparts. 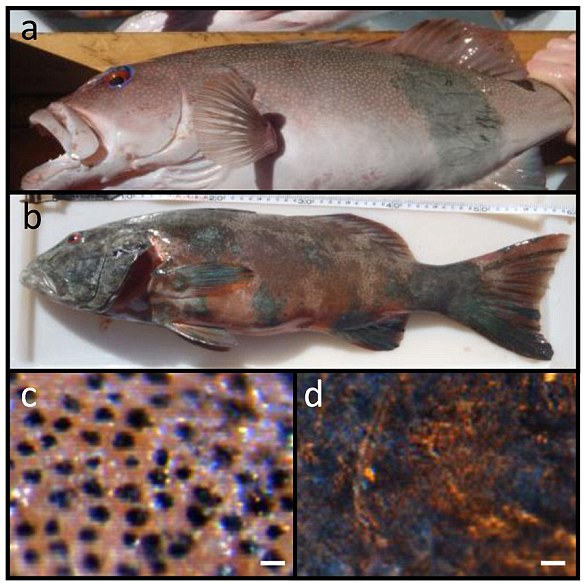 Coral trout, which live along the Great Barrier Reef, can develop melanoma.

Melanoma is the most deadly form of skin cancer.

The reef is situated directly underneath the largest known ozone hole, which exposes fish to high levels of UV light.

UV light is also the biggest cause of skin cancer in humans.

Research suggests clams can develop a form of leukaemia in their hemolymph, which is the equivalent of human blood.

Cancerous cells float away from affected clams to invade nearby animals, spreading the disease.