Ministers face a grilling in the Commons this week over the hostile £7.4billion takeover bid for engineering giant GKN.

Theresa May is under pressure to intervene amid mounting concern about the impact the buyout could have on industry and national security.

GKN, based in Redditch in Worcestershire, makes parts for the F-35 Anglo-American fighter jet, the Eurofighter Typhoon and the US’s B-21 stealth bomber, as well as cars and aircraft around the world.

Its future has been thrown into doubt after the City turnaround group Melrose lodged a £7.4billion offer last month. GKN’s board, led by American Anne Stevens, 69, is attempting to fight the deal.

GKN, based in Redditch in Worcestershire (pictured), makes parts for the F-35 Anglo-American fighter jet, the Eurofighter Typhoon and the US’s B-21 stealth bomber, as well as cars and aircraft around the world

Last night it emerged that Defence Secretary Gavin Williamson is set to be questioned about the bid when he appears before the defence select committee on Wednesday.

Its chairman, Julian Lewis, said: ‘The committee have had correspondence strongly against and in favour of the hostile takeover bid and I therefore wouldn’t be surprised if the topic came up on Wednesday.’

A Whitehall source said: ‘There is growing concern across Whitehall about the impact this aggressive takeover of GKN would have, especially the long-term defence and security implications it may have for the UK.’

The takeover already faces the prospect of wider investigations, with the business, energy and industrial strategy committee expected to scrutinise it further after initial questions were raised by chairman Rachel Reeves.

The Department for Business, Energy and Industrial Strategyis is understood to be monitoring the situation closely, and a senior civil servant has been appointed to examine the impact of a takeover.

The US’s own committee on foreign investment will also have to examine any takeover, as will the authorities in France and Germany.

GKN dates back nearly 260 years, and made cannonballs for the British Army during the Napoleonic Wars.

It now has 6,000 employees in the UK among 58,000 worldwide. It is a key supplier to aerospace firms including Airbus, with bases in towns including Telford in Shropshire and Luton. 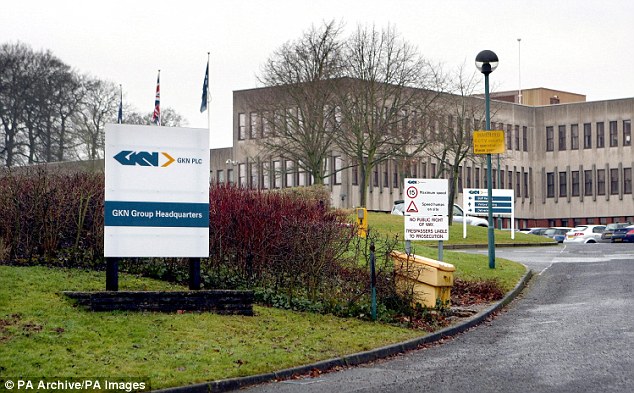 Its future has been thrown into doubt after the City turnaround group Melrose lodged a £7.4billion offer last month. GKN’s board, led by American Anne Stevens, 69, is attempting to fight the deal. Pictured: GKN headquarters in Redditch

Melrose specialises in buying underperfoming firms and selling them on at a profit within three to five years.

Speaking in the Commons earlier this month, the Prime Minister said: ‘Of course the business department will be looking closely at, and has been following closely, the issue. I and the Government as a whole will always act in the UK national interest.’

Concern about a GKN takeover has also been raised in the US, where Congressman Neal Dunn has written to the committee on foreign investment urging it to block the bid.

He said: ‘In addition to concerns over who may ultimately acquire GKN, Melrose’s business strategy will undermine long-term investments in research and development and secure supply chains, which are critical to the major defence platforms GKN currently supplies.’

They have said that they ‘welcome any and all opportunities to explain to government why we believe a merger with GKN will create an industrial powerhouse of which the UK can be rightly proud’.

They added: ‘Melrose builds businesses to long-term health and prosperity and has an impeccable pension track record.’