MPs have joined in a huge backlash against a university after it apologised for sending staff a photograph of Prince Philip opening its library.

Left-wingers working at King’s College London reacted angrily to an email bulletin they received after the Duke’s death in April, featuring a photograph of him opening the university’s Maughan Library with the Queen in 2002.

The complaints against the late Duke of Edinburgh – who was made Life Governor of the institution in 1995 – refer to his ‘history of racist and sexist comments’.

Following weeks of simmering tensions, Joleen Clarke, the associate director at King’s College libraries, sent out an extraordinary apology for the ‘harm’ caused by including the photo in her email.

But King’s College’s apology has since caused its own wave of backlash, including from free speech campaigners and MPs.

Yesterday government minister James Cleverly retweeted the reports of the apology, adding: ‘This is just getting silly now.’

Brandon Lewis, the Secretary of State for Northern Ireland and a King’s College alumni said: ‘This is beyond silly. As an alumni myself, I’m embarrassed about this.

‘HRH was an amazing public servant & this reaction by the University, to a very fair message, is beyond parody.’

Left-wingers working at King’s College London reacted angrily to an email bulletin they received after the Duke’s death in April, featuring a photograph of him opening the university’s Maughan Library with the Queen in 2002 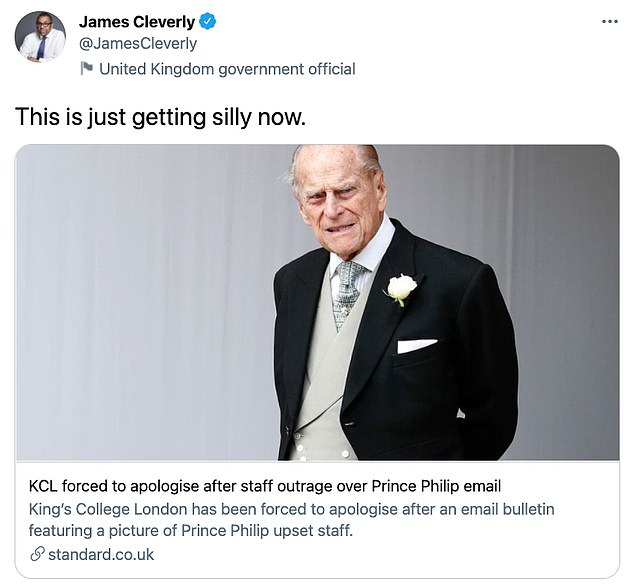 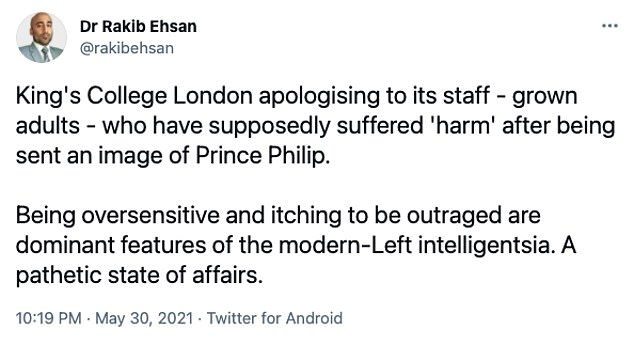 The apology by King’s College has since caused its own wave of backlash, including from free speech campaigners and MPs

Tory MP Sir John Hayes added that the college had found itself ‘at the extreme end of the spectrum when it comes to inhibiting free speech’.

‘We need to flush out people in our universities who are determined with an almost Maoist zeal to close minds in places which ought to be bastions of free and open debate.’

In Ms Clarke’s apologetic response last week, she suggested that the picture had been ‘included as a historical reference point following his death,’ but this was not in any way ‘intended to commemorate him’.

‘Through feedback and subsequent conversations, we have come to realise the harm that this caused members of our community, because of his history of racist and sexist comments. We are sorry to have caused this harm.’

But internally there was outrage from the university’s Anti-Racism Community of Practice over Ms Clarke’s email, which accompanied the photo with the explanation: ‘As the nation marks the death of HRH Prince Philip, the Duke of Edinburgh, we thought you might like to see this photo of the Duke at the official opening of the Maughan Library in 2002, which some colleagues will remember.’

Those angered by the message include the college’s head of partnership and liaison, Vanessa Farrier, who was appointed in a new role last June to ‘decolonise’ the library’s collection following Black Lives Matter protests.

The university’s anti-racism group complained of ‘harm’ caused by the email because the Prince had made a number of racist and sexist comments during his lifetime. 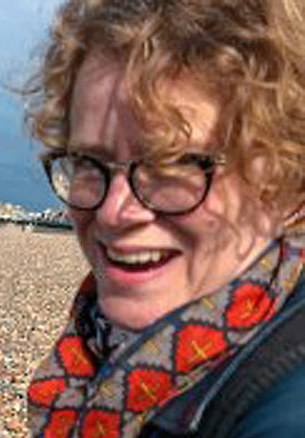 The college’s head of partnership and liaison, Vanessa Farrier (pictured)

He infamously referred to ‘slitty eyes’ during a 1986 trip to China, and in 1961 he complained that ‘British women can’t cook’.

A source claimed Ms Clarke had been ‘made to account for herself in a kangaroo court’ by colleagues, despite having played an active role in the university’s anti-racism programme.

Rubbishing accusations that the Duke was racist, Royal expert Hugo Vickers said: ‘Prince Philip and the Queen have spent their whole lives in service helping the Commonwealth.

‘He may have said things at certain times to get a rise out of people, but he was the least racist person. In fact, he was very engaged in questions of equality and multi-racial societies going back to the 1950s.

‘I don’t think these people at King’s College know what they are talking about, frankly.’

Dr Rakib Ehsan, an academic researcher who has focused discrimination and social relations among ethnic minorities said: ‘King’s College London apologising to its staff – grown adults – who have supposedly suffered ‘harm’ after being sent an image of Prince Philip.

‘Being oversensitive and itching to be outraged are dominant features of the modern-Left intelligentsia. A pathetic state of affairs.’ 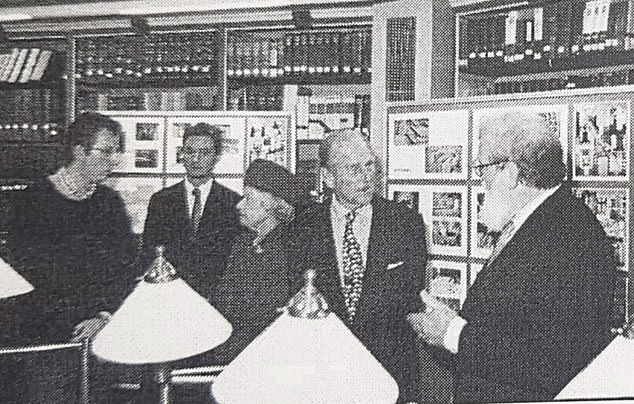 Free speech campaigners and MPs last night condemned the apology, labelling it the latest example of a ‘cancel culture’ by woke activists on university campuses. Royal experts insisted it was wrong to accuse the Prince of being racist or sexist. pictured, the Duke with the Queen

Toby Young, of the Free Speech Union, added: ‘The irony is that if it wasn’t for people like Prince Philip putting their lives on the line to defend liberty and democracy, university lecturers wouldn’t now enjoy the freedom to attack people like him.

‘When a war hero dies, shouldn’t these republican firebrands just say “Thank you for your service”, and save the political point-scoring for another day?’

King’s College London said: ‘As we previously highlighted in an official university statement, Prince Philip had a long and valued association with King’s.’