Marks & Spencer shares soared as bosses insisted the recovery was back on track after Covid triggered its first-ever loss. Chairman Archie Norman said the firm was emerging from the pandemic ‘a reshaped business’.

He added: ‘I think for the first time for three-and-a-half years there is a lot to feel confident about. There are enough green shoots and points of light to believe that M&S is on the verge of becoming a growing business again.’

The comments came after M&S plunged £201.2million into the red in the year to the end of March. That was the first loss since it became a public company 94 years ago – and possibly its first since it was formed in 1884. Group sales fell 9 per cent to £9billion.

Takings in the food division, excluding cafes and franchise stores, rose 6.9 per cent, while its clothing and home stores, which shut for several months, fell 31.5 per cent.

Chief executive Steve Rowe said the pandemic was a ‘point of inflection’ that allowed him to make drastic decisions to adapt to online shopping.

He plans to close another 74 home and clothing stores over the next ten years and open more Simply Food shops and beef up online operations. 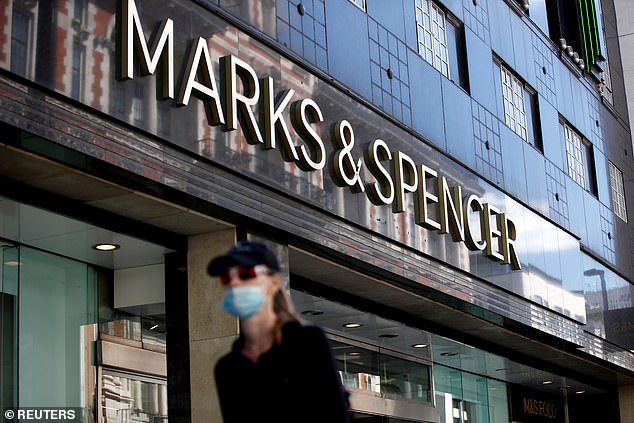 M&S plunged £201.2million into the red in the year to the end of March. That was the first loss since it became a public company 94 years ago

Shares soared 8.5 per cent, or 13.25p, to 169.2p, almost double the price a year ago. The rally came despite bosses ditching the dividend and warning there would be no payout this year.

Instead, investors focused on positive reports suggesting the business had become stronger. It expects two-fifths of sales to be online within three years.

Bosses have reworked the supply chain to meet the needs of online customers, and revamped the loyalty card, growing the number of members from 6m to 10m since July 2020.

Redesigned clothing ranges are helping it shift its frumpy image and bring in younger customers.

The tie-up with Ocado contributed £78.4million of profits. M&S said it was confident it will grow the food business, and will add ten to 15 stores per year over the next decade, adding to its 314 directly-owned shops and 437 franchises.

James Grzinic, analyst at Jefferies, which upgraded profit guidance to £350million, said: ‘M&S has gone from marked man to marksman.

It has emerged from Covid visibly stronger.’ Rowe will aggressively look for new sites, saying: ‘The good news is there has rarely been a better time to acquire space.’