Marks & Spencer has identified 100 key product lines it hopes will deliver a major boost to its core womenswear business later this year.

Chief executive Steve Rowe personally reviewed the autumn range earlier this month to see the ‘must-haves’. The retailer is preparing to stock at least 30 per cent more of these key products than it would do normally.

Rowe told a meeting with City banks and brokers last week that the range is ‘phenomenal’, adding that the company has kept a war chest of cash to buy even more heavily into key products if it becomes clear they are selling better than hoped.

New focus: : M&S will make its stores ‘cleaner and clearer’

M&S sources said the top 100 garments include ‘lines we can never run out of’ for fear of damaging customer confidence if shoppers are unable to find the items in their size.

Chairman Archie Norman said the chain was forced last year to rapidly pare back the range of products it was buying to reduce costs after the shock of store closures. That prompted a new focus on the size and shape of the entire clothing range.

Norman said the pandemic had made it ‘imperative’ to reduce the number of choices for customers. ‘We made decisions because we had to make them,’ he said. ‘But what emerged from that was very encouraging.

‘You’ll see an improvement now and there’s further improvement in the autumn and that’s not the end of the journey. I think there’s quite a lot further to go.’ Rowe said of the autumn range: ‘The concentration has been on the top 100 lines in each area [women’s, men’s etc] and the buys there are more than 30 per cent up.’

The strategy follows a substantial thinning of ranges in stores to weed out poor selling product lines and reduce replication. Rowe said the number of lines had already been cut back by a quarter in three years which has made stores ‘cleaner and clearer’. 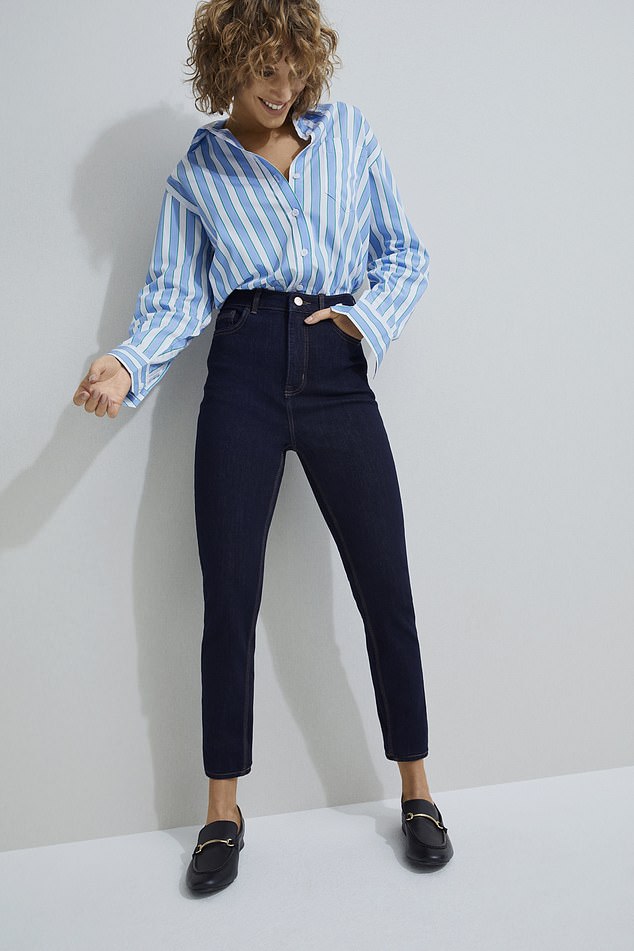 It will also prioritise essential product lines like jeans in womenswear

Rowe added that M&S maintains a cash reserve to allow it to buy further into ranges or hot-selling fashion lines when the season begins.

That includes a ‘test and repeat’ system for more risky lines – a strategy commonplace among online fashion retailers, although more difficult for a business the size of M&S.

Despite making a loss last year the company last week boosted pre-tax profit guidance to between £300million and £350million – higher than the consensus of £300million.

It is still fighting to catch up after years of stagnant performance. Plans include shutting 30 of its 255 clothing shops and turning 45 others into food-only outlets. Of the 180 clothing shops it plans to keep, about six will be moved into former Debenhams premises.

Finance chief Eoin Tonge has told City analysts that he expects the online clothing and home business to account for about half of sales in the division over time.

The company is weighing up plans to supplement online demand by shipping orders from stores under a scheme called ‘BOSS’ – Bought Online, Ship from Store.

Rowe said: ‘What we see is a way to ship more from store at a much lower cost and at a much faster service.’

The move aims to give M&S a major advantage over companies which only operate online.

He added: ‘Our concept is that you should be able to shop in multiple different ways.’