An MSNBC host was slammed on Twitter on Sunday after she expressed concern about her brother in the trucking industry, because it ‘feels dangerous.’

Tiffany Cross, the host of Cross Connection, revealed that her brother is a truck driver, and whenever he hits the roads, she worries for his safety because it ‘feels like a dangerous industry.’

She pointed to Bureau of Labor Statistics showing that nearly 77 percent of truck drivers are white, whereas 16.8 percent identify as either black or African American.

Only 12.4 percent of the workforce were women.

Cross, who is black, said in her segment on Sunday that she spoke to some minority truck drivers, who said they experienced racism on the job, and said that many truck drivers are aggressive – something she insinuated would not happen if more ‘people of color’ were in the industry.

But in the aftermath, some people on Twitter called Cross racist for stereotyping white truck drivers, and criticizing the industry. 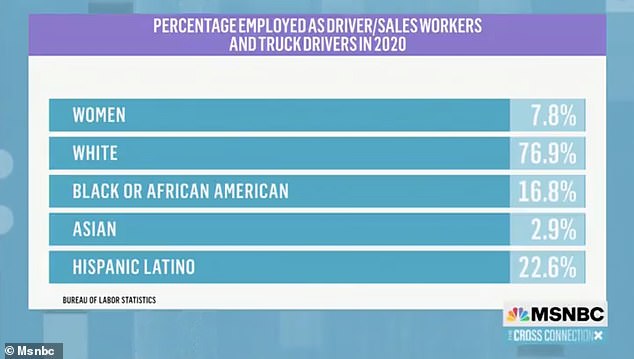 MSNBC’s @TiffanyDCross: Trucking “is an industry populated by a lot of white men over the age of 55. This group of people overwhelmingly voted for Trump. Some people have talked about, you know, aggressive truck drivers cutting them off or not being helpful.” pic.twitter.com/Ob8Kg03Dwa

Cross began her segment on Sunday by saying: ‘My brother is a truck driver and he drives across the country, and it’s really nerve-wracking to me when he’s on the rod because it feels like a dangerous industry.’

‘But you’re trying to disrupt that and bring more people who look like us to the industry,’ she told her guest, CrossCountry Truck Driving School owner and president Pamela Day. ‘Tell us why.’

Day then mapped out her efforts to promote diversity in the sector and get more people interested in trucking jobs.

‘We say we’re not building truck drivers but safe CMV operators,’ Day responded. ‘Folks that can get back to their home whenever they’re done with their shift. That’s the important part.’

But Cross dug deeper, asking Day how the industry could become ‘more welcoming,’ and noting that some minority truck drivers she spoke to said they heard racism come across the walkie-talkies.

‘This is an industry populated by a lot of white men over the age of 55,’ Cross said. ‘This group of people overwhelmingly voted for Trump.

‘Some people have talked about aggressive truck drivers cutting them off or not being helpful.

‘So obviously, the more populated it is with people of color, I think you’ll see less of that,’ she alleged. ‘But how can you encourage people to come and disrupt this space when it seems a bit unwelcoming?’

Day then responded that the best way to encourage people to get into the trucking industry is by showcasing other black people, and women, like herself, who drove for eight years.

‘I appreciate you for helping us get this word out,’ Day told Cross. ‘The women will be able to close this deficit if we just let them know.’

After a clip of the conversation was posted to Twitter, some users criticized Cross for going after the trucking industry and displaying racism herself

After a clip of the conversation was posted to Twitter, some users criticized Cross for displaying racism herself and for going after the trucking industry.

One Twitter user by the name ‘JT’ said Cross should try to drive ‘one of those trucks for 300 miles and see how hard they are to handle’ if she is criticizing truckers for aggressive driving, and another user said many people with older trucks cannot drive them in California anymore due to new emissions standards.

Others criticized Cross for stereotyping an entire group of people while criticizing racism. @ItstheDonz wrote: ‘Ahhhh yes, nothing racist at all about suggesting that an entire race of people drives a certain way,’ and another person insinuated ‘the behavior of truck drivers takes no race, color or creed into account.’ 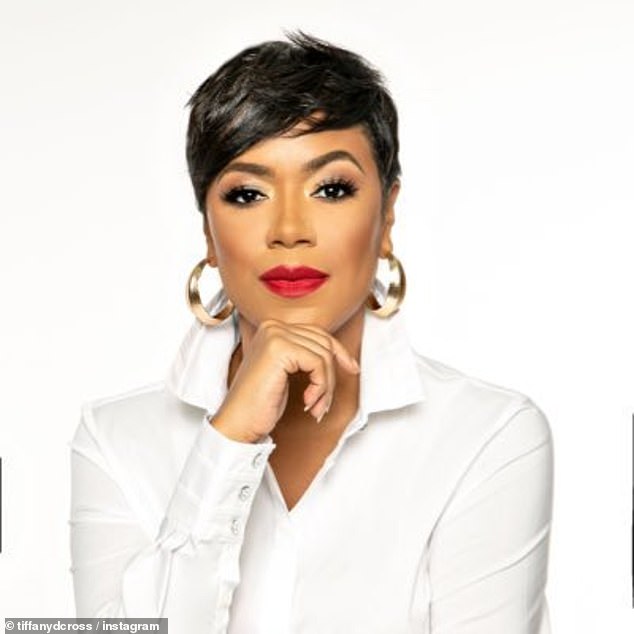 Cross, the host of Cross Connection on MSNBC, had previously been criticized for claiming that some black media hosts were ‘not necessarily black voices’

Cross has previously been criticized after she claimed that some black media hosts were ‘not necessarily black voices.’

‘OK Carlos Watson, Sage Steele, Van Jones – what do these three folks have in common?’ she asked in an episode last month.

‘Well they’re all people who’ve been propped up by wealthy or powerful white Americans, and yet we, the keeps of culture don’t really rock with any of them like that.

‘Now, obviously the three of these folks are definitely black faces. However, they are not necessarily black voices. And there’s a difference.

‘I’m sure someone is getting themselves a diversity pat on the back by having that modern-day minstrel show,’ she continued, speaking of Van Jones’ show on CNN.

‘A word of advice to the landscape of the rich and the powerful: Perhaps instead of investing in people of color who make you comfortable, you may want to give a second look to those of us who make you uncomfortable.

‘After all, we’ve been uncomfortable for a mighty long time.’