Col. Kriste Kibbey Etue has apologized for sharing a Facebook post belittling athletes who kneel during the national anthem

The Michigan State Police director is facing calls to resign after sharing a Facebook message belittling athletes who kneel during the national anthem as ‘anti-American degenerates’.

Col. Kriste Kibbey Etue shared a message on her Facebook page Sunday that stated athletes who take a knee during the pre-game national anthem are ‘millionaire ingrates who hate America and disrespect our armed forces and veterans’ and ‘a bunch of rich, entitled, arrogant, ungrateful, anti-American degenerates.’

Hundreds of athletes have expressed they are taking a knee during the pre-game national anthem as a symbolic protest against racial oppression and incidents of police brutality against blacks.

The controversial message on her personal Facebook page caused outrage, as some have called for her to be fired. 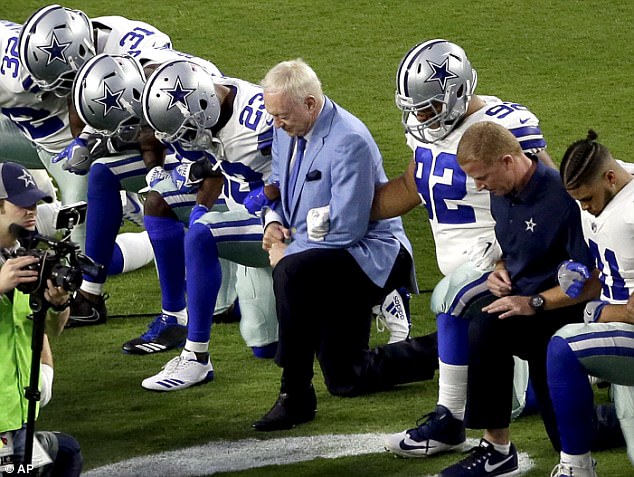 Etue’s post labeled NFL players who kneel ‘a bunch of rich, entitled, arrogant, ungrateful, anti-American degenerates.’ Pictured above are the Dallas Cowboys with team owner Jerry Jones taking a knee prior to the national anthem on Sunday 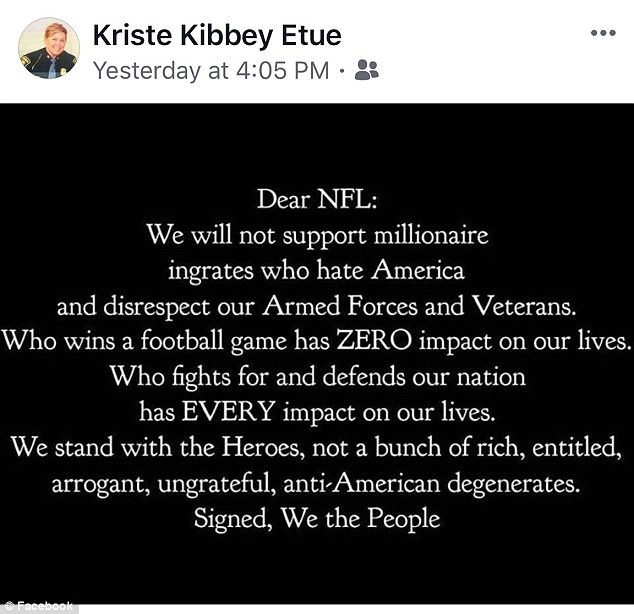 Etue, who is the Michigan State Police director, shared the above post to her personal Facebook page on Sunday

Michigan ACLU Director Kary Moss wrote on Facebook: ‘It is the sworn duty of the State Police Director to uphold the Constitution which protects all people in this State and to demonstrate respect for those principles.

‘She undermines her own position and the trust of the community with these remarks and utter disregard of the people she represents.’

‘I will continue my focus on the unity at the Michigan State Police and in communities across Michigan.’ 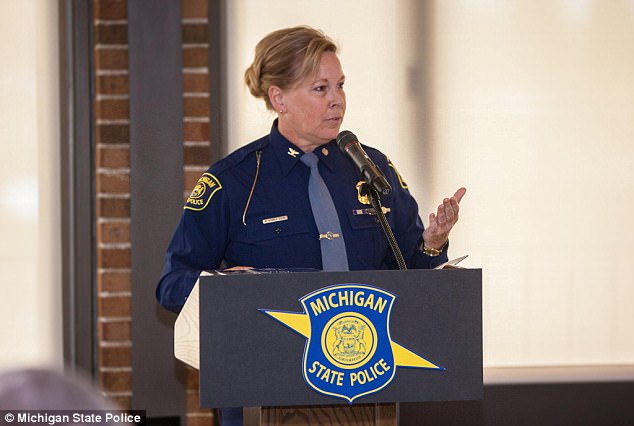 Late Tuesday Etue (file above) apologized for the post on the MSP Facebook page. ‘It was a mistake to share this message on Facebook and I sincerely apologize to anyone who was offended,’ Etue’s post read. Still some want her to be fired

But the Detroit Coalition Against Police Brutality said Tuesday that she should be fired.

‘Etue’s words simply reflect the continued racist actions of the Michigan State Police, both in how they treat our citizens and in how their hiring demographics fail to even approach equity,’ Kenneth Reed, the coalition spokesman, said in a news release.

‘There needs to be complete overhaul of the department, and we urge the Michigan Black Caucus to call an emergency meeting to address the issue and develop a list of demands…’

‘This isn’t about people being offended,’ Scott posted on Facebook.

‘It’s about the leader of the State Police missing the entire point of protesting police brutality. This statement helps nothing.’

Gov. Rick Snyder’s office has not commented on the situation.