This is the sickening moment an elderly woman was wrestled to the ground by a thug as he tried to snatch the gold bangles from her wrist.

Disturbing footage of the attack in Fallowfield, Manchester, shows the pensioner struggling with the mugger at the side of the road before she is flung onto her back.

The callous thief continues to try and steal the jewellery from her arm before he is chased away empty handed by a passing taxi driver.

CCTV of the attack in Fallowfield, Manchester, shows the pensioner being targeted as she checks her bins

Police investigating the robbery, which happened on May 9, have released the CCTV in a bid to appeal to any witnesses.

Officers say the victim who is in her 70s had walked towards the road at around midday to check if her wheelie bin had been emptied.

As she opened it to look inside, a man on a bicycle rode towards her, jumped from the bike and grabbed her, wrestling her to the floor as he tried to snatch the gold.

A passing taxi driver saw what was happening and stopped his car before chasing the thief away.

A second taxi driver also came to help but the man managed to escape on his bike.

According to GMP, he was described as white, of skinny build and aged in his early 20s. 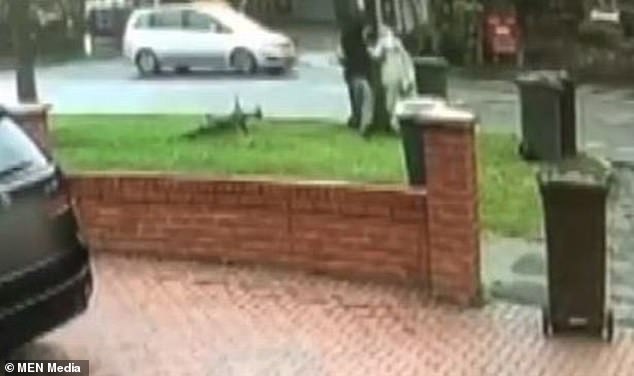 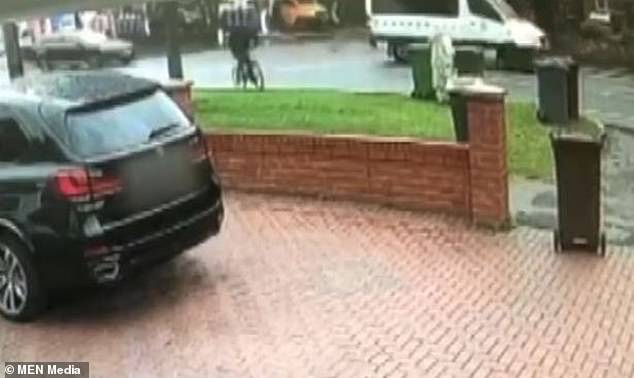 PC Daniel Cox of GMP’s City of Manchester division said: ‘This was a shocking attack on an elderly woman, carried out in broad daylight in full view of other members of the public.

‘I’d like to thank the passing taxi driver whose quick-thinking actions meant this brazen offender didn’t manage to steal anything.

‘We know that everyone in the community will share our disgust at this incident. While the elderly woman was left with only superficial bruising to her wrist and pain to her hip, the psychological effects of crimes such as this can be considerable.

‘We’re confident that there are several people who saw this crime take place. There are also likely to be witnesses who saw the offender on his bike shortly before and after the incident.

‘Did you see his direction of travel or have any information or dashcam footage that can assist us? If so, please get in touch as soon as possible.’